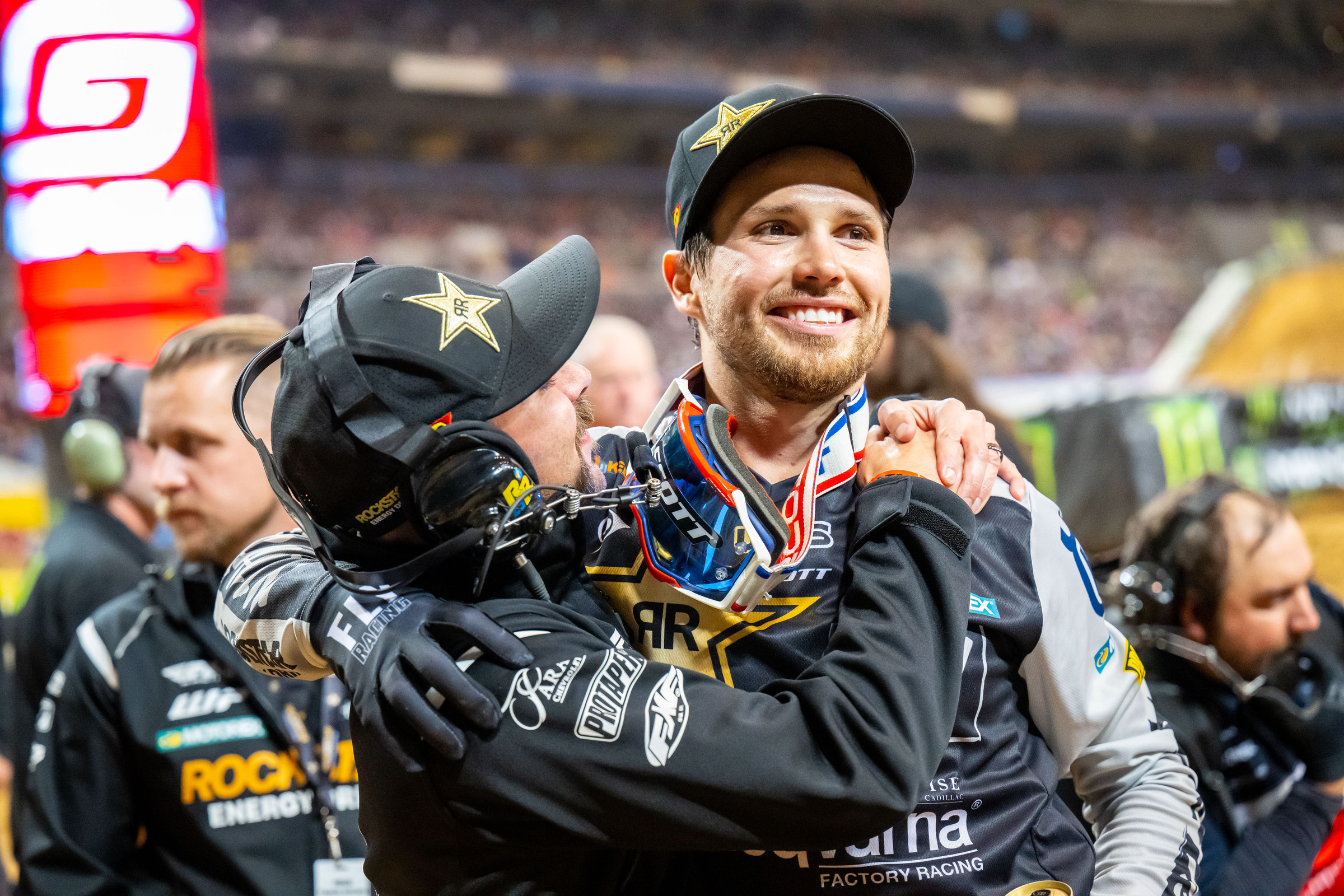 RJ Hampshire rides with his heart and puts his emotions on his sleeve. This year he’s been straight-up about struggling with the new-generation Rockstar Energy Husqvarna, including the last race, where he podiumed but said it wasn’t a good day. Well, two weekends off for 250SX East allowed RJ to keep riding with the same setup and learn to trust the bike, and he looked much better, immediately, in St. Louis, putting in the fastest time in the first two practice sessions. He also holeshot everything all night, but a big crash while leading the first of the Triple Crown races appeared to end his bid for victory. As it turned out, Jett Lawrence would crash in the final race, opening the door for RJ to go 2-2-1 and snag the overall. Lawrence did beat Hampshire straight up in race two, but for RJ, this was more about just being in the fight and being in the hunt. The win, that’s a totally different expectation.

He talked about it in the post-race press conference.

RJ, emotional, the podium. It was good to talk to you up there. Just kind of take me through it now that you’ve had a chance to settle down and talk to the family a little bit. Great night for you.
RJ Hampshire: Yeah, it was huge. The first five rounds were so mentally draining. There wasn’t much positive. It didn’t matter. There really wasn’t one practice. We didn’t really have a positive. From the beginning of the day, just felt right. The team, they’ve been crushing it. I kind of shoot straight on what’s going on, but these guys went to work for me. You could tell today was a different bike than what I’ve been on. We made a lot of progress. Like I said, from the beginning, I was P1 in free practice, which I haven’t been at all. P1 first time also. I knew I had my comfort back. Just kind of trusting the bike a little bit. My starts were unreal all night. I think I holeshotted every single main, even the red flag one. The mistake that first main event, I’m very lucky to even get back up. That could have been a big one. Before that, I felt good, really good on my bike. I haven’t had that – I don't think I’ve ever felt like that on the bike. It just kind of grabbed me weird. I didn’t even cross rut. Just kind of shot me right a little bit. Like I said, thankful I was able to pick it up. Just my starts tonight were solid. I think that’s why. We were able to get some help from Jett in that last one, but still a huge night for my whole team and my family.

When you’re working through a new model like that, obviously you looked a lot different and you’re saying that, is it suspension, chassis? What was it that you were searching for that dramatically affected everything from the last time we saw you?
We just got the bike so late and didn’t really have much tests to do. We were still low on parts and stuff, so you don’t really have the options. We were cycling through a lot of things outside of what we were looking at. Then we found a big issue that we were struggling with the whole package. But, we figured it out before Indy. I just didn’t have the time to ride with it. So literally I showed up at Indy and it was just like, all right, let’s see what we’ve got here. Those two weekends off helped out huge. You could tell I was a lot more comfortable, kind of knew what my bike was going to do a little bit. Just super stoked for the whole team.

You have been super honest, as you said, in these press conferences. What’s the atmosphere at the truck when they hear you say those things? Do they take that in stride? Do they get bummed? Do they tell you not to be frank?
No one has really said anything to me about it. I’m going to be honest. Sometimes it might go a little bit too far. We all work way too hard to be out here and not be able to perform at the level we should. I was frustrated, but the team was frustrated also. So it’s not just all on me. We all wanted to be better and we all knew we could be. Like I said, tonight was a big win for me but also a big win for this team, a big win for Austria. That was cool we were both able to get an overall tonight, even with Marv [Marvin Musquin]. Stoked for the whole Austrian brand, and especially Husqvarna.

Some of us are old enough to have covered your entire career through amateurs all the way up into the pros. We’ve seen how close you’ve come. We’ve seen the different rides and points in your career. You’ve worked so hard for this point to get your first [supercross] win. How does reality match up to the dream?
Man, it’s huge. You almost start believing that you’re never going to win one. It’s that long. It’s like, okay, maybe supercross just isn’t meant for me. Like I said, Jett definitely helped me there with that third one. I’ve been in the situation to win a couple of these now and threw them away. I thought I was going to throw it away tonight with that big one [in race one]. So, just putting yourself in the right situations and being able to be there. I came into this weekend just hoping to have a shot at battling with Jett. I want to be able to at least see him and be able to ride how we should be. Last race [in Indianapolis] we got a third, but I was so far back we were in our own race. I didn’t come here wanting to win. Of course you want to win, but just kind of a different goal. Be in the fight, and tonight we were there.

How aware are you of the expectations that are thrust upon you as a likely champion rider in either supercross or motocross?
We’re all expected to win whenever we have these factory rides. It’s kind of been my whole career. A lot is expected from me. I work as hard as I can. You can tell I want to win every time I’m out there, and sometimes I try almost too hard and it does bite me. So, it’s not a lack of effort or anything like that. Just like I said, putting myself in the right situations and being able to capitalize on mistakes that other people have, and people capitalize on my mistakes quite a bit. It was nice to get one tonight. For outdoors, I honestly haven’t even rode outdoors yet on this new bike, but we have a lot of positives already. So, I’m looking forward to it. We’re on outdoors this week. I’m excited.

Can you just take us through that crash and how you were able to just jump up so fast in race one? How are you feeling after that?
Let’s go back to practice. I think it was the last qualifier. I was right behind Jordon Smith and he literally did the same exact thing. You don’t even cross-rut. It’s just one line that I think they kind of filled in a little bit and it happened to shoot you right. I was three and on, off. I literally don’t even understand how it happened. It just kind of went right. There’s so many things going through your mind whenever you see tuff blocks and you know you’re going to be landing on them. All this is going in my mind, and then I think about Deano [Dean Wilson]. I think it was Arlington or whatever. He landed directly on a Tuff Block and just kind of rolled out of it. So, I kind of had an option to either go right and land halfway on it or just stick to where I was and just hope for the best. I was like, this isn’t going to be pretty either way, so let’s just land on the softest thing possible. Then I kind of slid on the concrete into the wall. I was like, all right, I’m good. Then there was a banner stuck in there, and I had already gone through the whole banner situation last year where at Millville I completely DNF’d because I got on it too early. So then I had to be kind of calm. My front end was all tweaked up. I thought I threw my whole night away right there. So, I was very lucky to escape that pretty good. Luckily I had a pretty good lead already, so I didn’t lose too much time. That second main, I just kind of was like, this is a last-ditch effort here at the end. I knew we had a pretty big lead for third. You guys can probably tell already that I’m not just going to kind of lay over. So, gave it all I had and that was it. Like I said, just got lucky there in the third one with Jett having his issues. Glad to have it finally kind of fall in my hands on one night.

You talked a little bit tonight about the crashes tonight. You’ve talked in the past about trying to clean up those little mistakes. In that third race, is that in the back of your head? “I cannot crash,” Especially when you’ve got Phil Nicoletti ready to blast you if you make a mistake?
Honestly, I took a glance at the leaderboard and I didn’t see Jett in the top five. So, I was like, okay. Just chill out. At that point, I had Pierce [Brown] all over me. I don't know what he’s thinking right now. I know he was probably going to run it in on me. I almost just kind of checked up and was like, here, dude. Have it. I’m pretty good right now. I’m going to follow behind you. If I need to make the pass here at the end, I can. It was more just like, making sure I was in the position to have a shot still at this overall. I think my mile per hour dropped to probably 20 in the whoops by the end of that last lap! I don’t sit here and think about crashes or think about the negativity or whatever. I’m just a positive guy and I want to be the best I can be. You get the best every time. A lot of the time, I end up on my head or whatever, but like I said, we’re out here, we all want to win. We have a family. We have a team, a lot of guys behind me. So, yeah, there’s pressure, but you want to be the best you can. A lot of the times it hasn’t worked out too well for me, but tonight it did. So, we’re going to take that positive and try to build on it, get another good week on this bike, and hopefully have some more comfort coming into Atlanta next weekend.