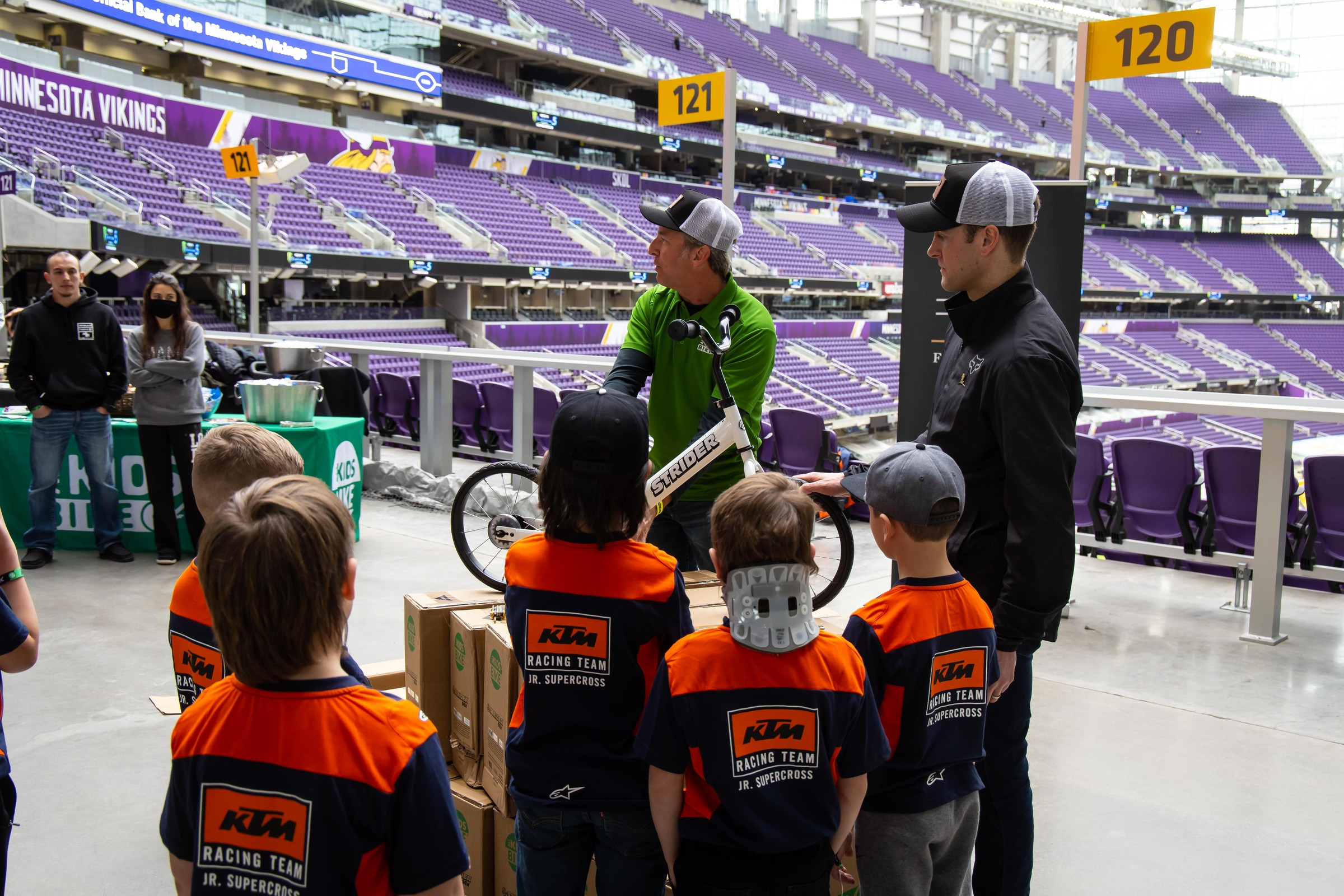 Ryan McFarland wanted his kid to learn how to ride a bicycle then eventually transition into riding a motorcycle. But he learned the hard way that tricycles and bikes with training wheels teach the wrong skills. So, McFarland went and created a two-wheeled balance bike that had no chain or pedals, just a spot for kids to place their feet on—similar to foot pegs on a dirt bike. Well, fast forward to the current year and McFarland’s Strider bike has sold over 3,500,000 bikes worldwide and looks to pass 4,000,000 this year.

Within this industry we all know Strider bikes. Most moto parents have their future racer on what's known as a balance bike at a very young age. We've also heard the pandemic of 2020 created a huge boost in bicycle and motorcycle sales. Well, that's only what's happened within our industry, with people who already understand the power of two wheels. In mainstream America, fewer kids are riding bicycles. The numbers are shocking, such as a 35 percent reduction in bicycle riding over the last ten years.

McFarlane started Strider. Just one dad with one idea on how to create a better learning experience to his son. Now the company is helping provide opportunities for more children to learn how to get on two wheels in a safe manner. One of them is the charity All Kids Bike, which gets Striders into schools. Jason Weigandt caught up to McFarland at the Minneapolis Supercross, where Ryan Dungey teamed up with Strider as a part of the Ryan Dungey Foundation to help get Strider bikes into schools in Minnesota. Dungey, the multi-time AMA Supercross and Motocross Champion, has picked All Kids Bike as one of his charities of choice in his foundation. For more information, visit https://striderbikes.com/ also the All Kids Bike foundation to find out how you can help get more bikes in more schools.

Racer X: You invented the Strider bike; can we talk about this real quick? Are you still involved or are you like, “No, I’m moving onto the charitable element,” or are you doing both?
Ryan McFarland: Well, I spend an awful lot of time on the charity side now, I’ve got a great staff at Strider now that really can run the show without me. I mean I’m in on some key decisions here and there, but I am really spending a lot of my time on the bigger mission I guess, which is at the heart of Strider which is teaching kids to ride. So now the foundation has taken it up to the next level and say, “This is great that we got all these enthusiasts riding on Striders but there’s the masses of kids that are not getting that experience.” So, the foundation is, it’s almost like to use motorcycle terms, it’s kind of like riding sweep. We are picking up everybody that didn’t get this great opportunity [to learn to ride a bicycle] as a little kid. We are going to make sure that they didn’t miss out. We want to make sure that everybody knows how to ride a bike.

Because those are startling numbers, you told us. Thirty-five percent drop in kids bicycling in the last 10 years in the U.S. An average of seven hours a day of screen time. All of us in the industry so to speak, because of Striders and Stacycs and Cobras and PW’s [Yamaha] and all that, we think that there’s more riding than ever. But that’s not the case in the mass market.
No, that’s not the case, no. It’s like things are thriving within that small niche of the enthusiasts, but when you get outside of that, it’s startling. At beginning of this week I was at a kindergarten class, and the majority of the kids did not know how to ride, and they were even afraid to get on the bikes. Even a Strider, and you know you’re just standing over it.

I know my kid was riding one at 18 months. You're talking about six-year-olds being scared.
Five- and six-year-olds that were afraid, they were expressing concern to their teachers, saying “I don’t know if I should do this.” But by Wednesday, we were in the class again on the third day, and they’re all out there riding! The level of increase of their confidence, set the bike riding aside, the increase in their confidence was just amazing to see.

So, the Strider concept. Every time I see someone trying to ride a bike with training wheels, I’m like, "Don’t do it! Start with a balance bike!" And then I think, why did no one come up with the balance bike concept in 1964? Where did you come up with the idea and why didn’t someone come up with it 30 years earlier? Because it’s so much better than training wheels.
Yeah, you know the idea goes back 200 years, that predates the bicycle even, as it was just a walking machine for adults. So, the idea is not new. We just somehow lost sight of it.

They existed? We had bicycles without chains pedals back then? Wow!
Right. So, it goes back a couple of centuries we just lost track of it. And humans have a tendency to overcomplicate stuff and so we kept adding stuff and the solution when a child was struggling was let’s put stabilizers on it and hold it up for them. So, we made the bike bigger, heavier, more complicated, and actually shielded them from what they were trying to learn. And so really it was a major step back into simplicity to say what’s the essence of what we need to be teaching. And that’s, “How do I balance a two wheeled machine between my legs in the simplest fashion?” If we can get kids started super young, then riding a bike just becomes something very easy and natural. We talk about it being the first rung of the ladder to all of motorsports really, bicycling and motorcycling and other motorsports. But it’s getting kids on that first rung of the ladder and then letting them climb that ladder as far as they want to go.

Okay so for you personally and for the company, where was your Eureka moment where you decided to do this or thought there was a void you could fill?
With Strider we would get calls all the time from parents saying my eight-year-old doesn’t know how to ride, or my ten-year-old doesn’t know how to ride. A lot of times some of those calls were special needs, they had an arm amputated can you help us? So, we would build some custom bikes for those applications, and we still do a lot of that. But we then started getting just general calls, it wasn’t just special needs anymore, because we were very successful in all of those channels. It became more and more, “My eight- or ten-year-old doesn’t just want to learn,” and I just kind of ignored them for a while. It just seemed like an anomaly at first, but the calls just kept coming and pretty soon it’s to this point where it's clear there’s something here, there’s something going on. And that’s when I started looking at the statistics and the sports activities studies, and it took me awhile to even believe those statistics.

Yes, 35 percent drop in kids riding bikes at ten years, terrible.
Yes, and 75 percent of kids won’t even ride a bike in a year, not even once. You can’t set the bar any lower than one time in a year. So, I really just started studying the problem more, and talking to teachers and school administrators and you realize that yes that is the case. At the majority of schools that we go into, the vast majority of the kindergarten class will not know how to ride a bike, and it’s evident on day one. They don’t know how to balance the bike; they can’t keep it upright. Half of them are scared to even get on it. Just zero exposure to bicycles.

Hey parents, here's the best part about two wheels: it's endless entertainment for the kids. I cannot emphasis enough much this comes in handy. Now for the Strider bike itself what was your Eureka moment to either invent it or cobble one together?
Well I’m a motorcycle enthusiast, and then I became a dad, I had a two-year-old and was super excited to get him riding. So, it wasn’t right away, I went down the path of training wheels, all the way. And probably because I went all the way I realized it was a dead end. I mean he had little tricycles, little bikes with training wheels, he had a PW50 with training wheels. I mean we were all in on the training wheel path. And I just really realized it’s all too heavy, it’s too complicated, and I had this sense that he’s learning the wrong skills. So I would ride around, we had a little TTR50 [Yamaha] with training wheels too, and I would ride on the back of that with him and try to let him steer it and what I realize is, again subliminal that we would just take for granted but, I would say, “Hey go to the left,” and he would just turn to the left. Well on a motorcycle or bicycle you turn to the right and create a lean and then you go to the left. So I realized the training wheel method really is teaching kids the opposite skill they need. So, to transition off that stuff onto two wheels you actually have to unlearn what you’ve been practicing. So that was what kind of drove the point home . We need to go way back to the beginning and rethink it from the start, so we don’t even go down this path and have to come back.

Absolutely. So, did you cobble one together basically?
Yup, I took his little bike into the shop. So, this Strider really, it’s a Saturday afternoon garage project. Packed up his little bike and now we’ve sold over 3,500,000 bikes worldwide, basically, fundamentally changed how children learn to ride bikes and shown people that it’s possible at a young age. So, we’ve proven that beyond question. Now the foundation, All Kids Bike, as I say we are riding sweep, we are going to pick every kid that didn’t get that fun experience and make sure they don’t leave kindergarten without having this skill.