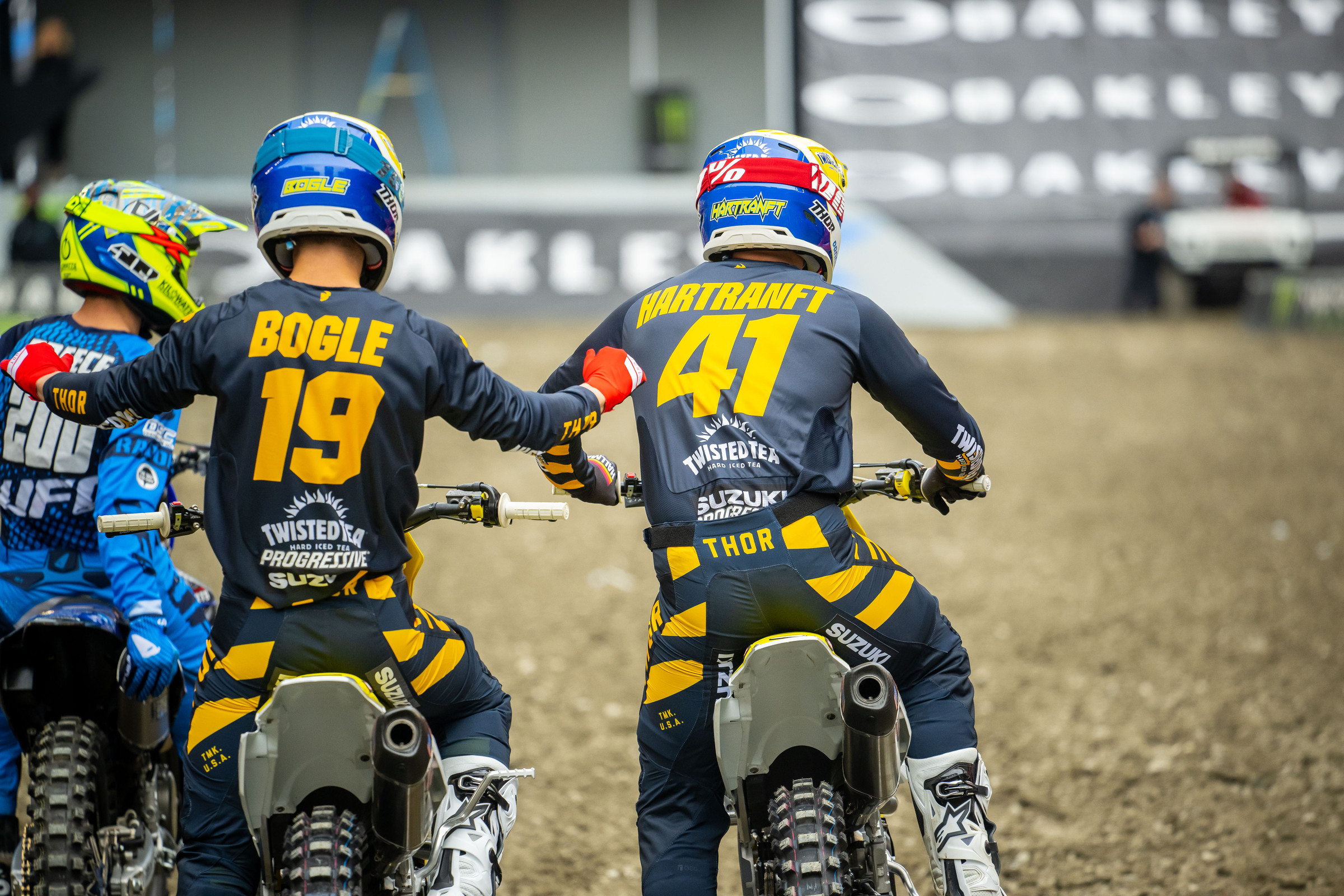 The Moment Their Time

It doesn’t matter that Adam Cianciarulo is out with a knee injury, Chase Sexton scratched from Seattle after a huge practice crash, Aaron Plessinger is out with a broken arm, Dylan Ferrandis is out with a bruised wrist, and Ken Roczen is, well, he’s just out. Well, it actually does matter, but it won’t matter ten years from now when a rider is at a party with mixed company and can claim he was top ten in the world or got to be part of Monster Energy AMA Supercross opening ceremonies. By then no one will question who was racing and who wasn’t. For privateers, journeymen and more, these accomplishments are going to mean a lot if they can get them when the opportunity is there.

It hit when Twisted Tea/HEP Motorsports Suzuki’s Brandon Hartranft got to be part of opening ceremonies at the last two races. Last year as a 450 rookie, “The Brick” was struggling to even make mains at one point. He’s ridden much better this year, hovering inside the top 15 at most races, and now that guys are out, he’s moved into top-ten land, with a 9th in Detroit and a 10th in Seattle.

“I’m doing my job and it’s a long season and you have to be there to the end,” Hartranft said to our Steve Matthes after the race. “Guys are hurt, and literally we get paid to be there every weekend. Lately the tracks are getting so gnarly it’s biting people. For me, I’m trying to build as much as I can and learn. I’m being smart about it. I’m not just sending it and praying for the Lord. Whatever people say, I don’t care. Right now, I moved up to 11th in points. From last year to this year, it’s insane how much I’ve progressed. I’m proud of myself and the team and have the potential to be top 10 in points. That would be bad ass.”

That said, Hartranft has seen what the front of the pack looks like.

“Dude I’m like, this three-on [tripling onto a tabletop] looks decently tough, first practice Tomac is hucking it [a quad]. Dude, he’s on an absolutely ‘nother level. I’m like, how can you go that much faster? Honest to God. Tomac is greasing it [the quad] like it’s a damned double.”

Well, that’s Hartranft taking what he can get and not over stretching his boundaries and getting hurt. His teammate Justin Bogle is doing similar things. It’s been a rough season for Bogle, starting with not making the Anaheim 1 main. There have been signs of life lately, with 8-13-8 finishes at the last three races.

“I know a lot of guys are out, but I’m also feeling a little bit better every week,” said Bogle. “I’ve been on that [injured] side of this coin too many times to count. The fact that we’re at the races every week and we’re able to improve and get better is big for me.”

Career highs have been a constant theme the last few weeks. SmarTop/Bullfrog Spas/MotoConcepts Honda’s Mitchell Oldernburg jumped back up to the 450 after racing 250SX East and promptly logged a 450 career best with ninth. He actually passed Bogle for eighth at one point, but a small crash held him back.

“It was a fun day, I felt like I was right around that eighth spot all day long,” he said. “Just kind of lost my balance at one point. I had one day on the 450, coming in. It’s one of those things, we’ve done thousands of laps, so I know how everything is going to feel.”

Just behind Bogle, Oldenburg, and Hartranft came a huge battle with privateers Justin Starling, Cade Clason, Ryan Breece, and Kyle Chisholm. Chisholm has long served as the privateer benchmark for 450SX results, but he came into this race hurting after a mid-week crash. This was the chance for the likes of Breece, Clason, and Starling to get him, and at one point their freight-train battle came rumbling by, just as the whole pack was starting to get lapped by second-place Jason Anderson. It was wild to watch them battle while Anderson also tried to pick his way around, and the track was also hammered at this point, so everyone was in survival mode.

In the end, Chiz is gonna Chiz, and he passed each of those guys back to net 11th, with Starling 12th, Breece 13th, and Alex Martin 14th. Starling has gone 12-11-12 in the last three races. Breece has gone 11-10-13. These are examples of riders who have realized this is their moment to fight for that top ten, and they’re trying to make the most of it. Yeah, a lot of top guys are out, but no one is going to know that years down the road when these guys say they went top 10 in a 450 supercross.