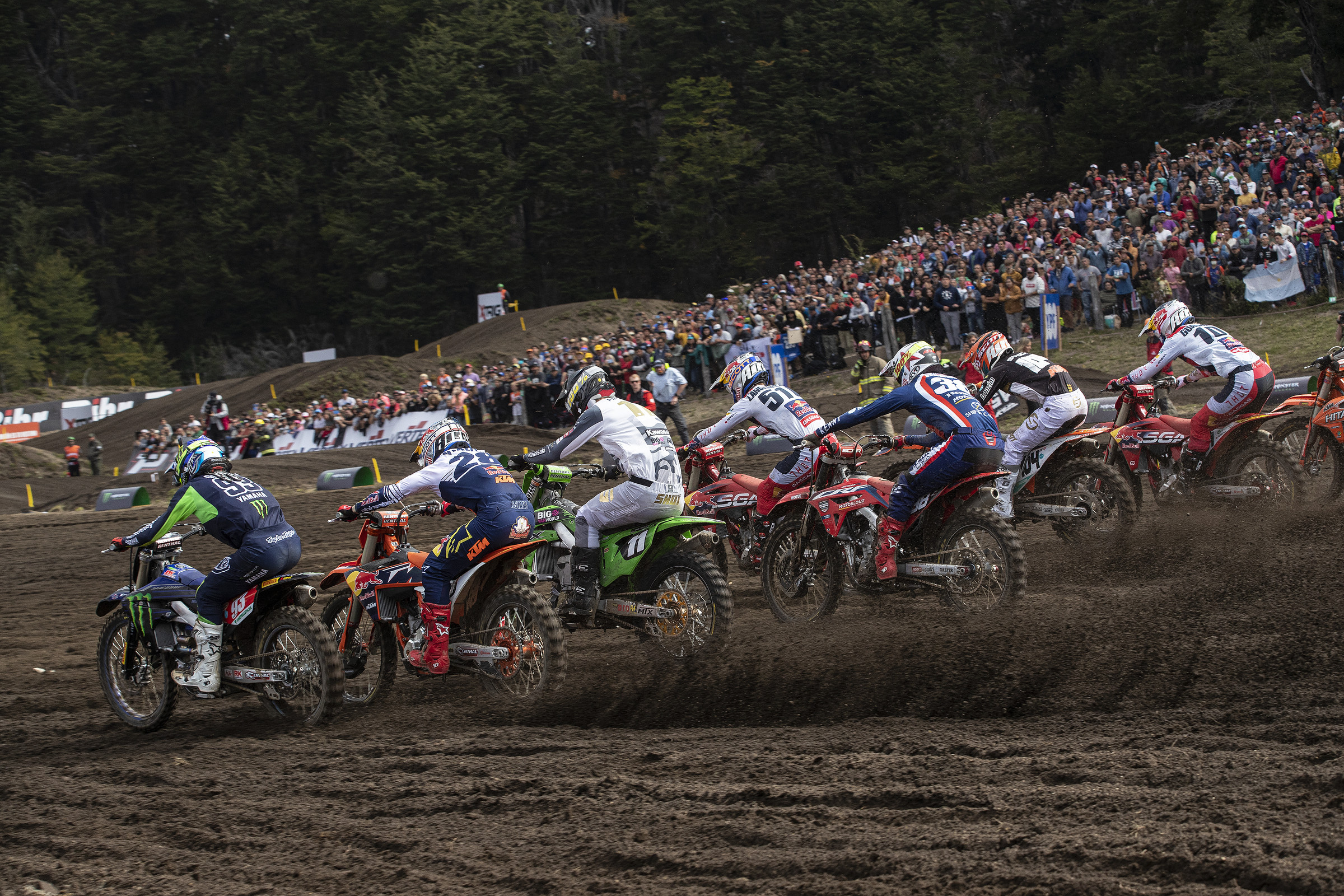 After a weekend off, the third round of the 2022 FIM Motocross World Championship (MXGP) took place over the weekend. Just as they did for the first two rounds, insiders Adam Wheeler (journalist with OnTrack Off Road) and Lewis Phillips (journalist with MX Vice) are back to provide their insight on everything from Argentina from race results, the main storylines, injury updates, inside intel, and more.

Says Wheeler of this week's episode: "A fast, spectacular track, feverish fans, slightly formulaic results and a controversial start gate quantity: there was quite a bit to get through with round three of twenty in 2022 MXGP."

The MXGP of Patagonia-Argentina delivered, as it always does, with a crowd of 39,000 fans keeping the atmosphere at a maximum from the first warm-up session to the last chequered flag of the day, reminding the whole paddock why the Argentinian Grand Prix is among the best on the racing calendar.

In the opening MXGP race of the weekend, we saw JM Honda Racing’s Henry Jacobi grab the Fox Holeshot, though it was Monster Energy Yamaha Factory Racing’s Maxime Renaux who jumped into first place ahead of Honda 114 Motorsports’ Ruben Fernandez, who sensed his own opportunity to lead an MXGP race and did just that.

Fernandez’ lead did not last long as only a couple of corners later it all went wrong, and he crashed hard. This meant that Jonass took over the lead after finding a way past Renaux. Fernandez managed to get going again and eventually came back to 15th.

On lap four, Gajser eased past Seewer for third, as Prado was starting to come under attack from Thomas Kjer Olsen of Diga Procross KTM Racing for fifth.

Gajser then focused his efforts on the front as he closed in on Renaux. The Frenchman made a small mistake which handed Gajser an opportunity to attack, but he could not get it done as Renaux was riding defensive and not backing down to the multi-time world champion.

After leading for 11 laps of the race, Jonass went down, which meant that Renaux was then the leading man with Gajser breathing down his neck. The battle continued for another nine laps as Gajser tried his best but ultimately Renaux was cool under pressure and went on to secure his first ever MXGP race victory ahead of Gajser and Seewer. In the final laps Jonass dropped two spots, finishing behind Prado and Olsen.

In MXGP race two, it was Gajser who secured his first Fox Holeshot of 2022, though it was Prado who led the race. Gajser though was not going to miss out on a win again, as he made a quick pass on the Spaniard to move into the leading position.

Seewer and Olsen went down on the opening lap, with Olsen not finishing the race, while Seewer gave his best to come back to 13th before deciding to retire from the race just four laps from the end.

Renaux got by Jonass for third, as Fernandez did the same. Though Jonass was able to get the Spaniard back by the third lap and maintain his position for much of the race, until Fernandez bounced back in lap 14 to take away fourth from the Latvian as the pair banged bars.

Back at the front, Gajser was looking in control as he got his head down and opened up a strong gap to second position. At that point it was Prado who was second, though Renaux played it smart and took his time to get by the GasGas rider on lap five.

Team HRC’s Mitch Evans was having a strong race in sixth, though later in the race, dropped two positions and finished eighth.

In the end, it was a fairly easy race victory for Gajser, who was victorious ahead of Renaux, Fernandez, Prado and Jonass.

In terms of the podium, it was Gajser who secure his third back-to-back GP win, while Renaux celebrated his second time on the box in MXGP, as Prado joined them in third.

Heading into the next round at the MXGP of Portugal, Gajser leads the MXGP standings with 141 points ahead of Renaux who now moves into second 124 points, six points ahead of Prado in third.

Tim Gajser: “I’m really happy, it was a good weekend for us. We had a little bit of bad luck in the qualifying race, but I knew I had the speed, seventh gate pick was not too bad. I managed to take two solid starts, in the first one the start was not the best but anyway I came through the pack, finished second, Maxime was riding really good, and we were battling until the end. And then the second race I took the holeshot, but Jorge passed me and then I passed him back. I made a little gap and controlled the race so I’m really happy.”

Maxime Renaux: “It was a really good day and I’m really happy with it. We started slowly yesterday, but step-by-step I made some improvements on the track. Very solid start in the first race, I didn’t quite make the Fox Holeshot, but I was leading and got passed by Pauls, but then he crashed, and I could lead again. In the end I had some good battles with Tim, he really pushed me in that race but I’m really happy with it. In the second one, it was a little bit of a different story, a bit of a worse start and had to come through the pack, I managed to pass everyone but Tim who was really fast. Solid weekend, I am very happy.”

Jorge Prado: “Overall, it was a tough weekend for me. I just didn’t feel good from Saturday on, so it was hard and not being able to be competitive it’s harder also, but the guys next to me were way faster, I just couldn’t hold on and I couldn’t really ride like myself. It was hard, I didn’t have good lines and didn’t ride good. Sometimes it happens, still on the box and third in the championship. But we are going back to Europe and the next round is Agueda, I got the red plate there in 2019 so I have confidence and will get back to work, nothing else to say.”

Further behind was Big Van World MTX Kawasaki rider Mikkel Haarup who was applying a lot of pressure onto Hitachi KTM fuelled by Milwaukee’s Isak Gifting. He was able to make it stick and move into sixth and set his sights on Facchetti ahead.

Geerts then managed to break free of the hard charging de Wolf and set the fastest lap of the race as he looked to get back in the battle with Vialle.

de Wolf then lost some ground and it looked like Längenfelder was going to use this to his advantage to go after third. As the battle between the pair intensified, both de Wolf and Längenfelder crashed hard, in two separate crashes within second of each other, with de Wolf not finishing the race, while the Längenfelder was able to get going again.

Meanwhile F&H Kawasaki Racing’s Kevin Horgmo was looking very strong as he charged through the field. By lap seven, he inherited third and was looking good to finish inside the top three.

Meanwhile Vialle was looking more and more comfortable in the lead, as the riders battled behind him. Red Bull GasGas Factory Racing’s Mattia Guadagnini got by 426 Motorsports Conrad Mewse for fifth, with Haarup doing the same after crashing earlier in the race.

In the final two laps we saw some excitement at the sharp end of the field, as Geerts looked to steal the win from Vialle. And he did just that, though Vialle responded, and it took the Belgian a couple more corners to secure the spot entirely.

Geerts went on to win the race ahead of Vialle, Guadagnini, Haarup and Horgmo, who lost two spots on the final lap.

The second race of the MX2 category did not begin as planned with the race being red flagged less than two laps in, as Facchetti went down, and the medical crew needed a clear track to move him safely. The Italian confirmed on his Instagram page that he sustained a small fracture to his wrist and ribs.

The restart of the race though saw Längenfelder claim the second Fox Holeshot with Geerts right behind him.

By the end of the second lap, Geerts was already the race leader, as Vialle also went by Längenfelder and so did Horgmo. The German and Norwegian then had a close battle, though were caught out by Guadagnini who was on a charge, as he managed to get by both riders by the fifth lap, to move himself into third.

Vialle looked like he was on a mission after a tough couple of races and on lap five he got by Geerts to take over first place. A couple of laps later Horgmo crashed out of fourth, but was able to get going quickly in sixth, though he did not finish the race in the end.

Haarup was on it as he passed both Längenfelder and then later Guadagnini to secure third place in the race by the chequered flag.

A 2-1 result gave Vialle his first Grand Prix victory of the season, with Geerts forced to settle for second, while Haarup celebrated his first MX2 podium since Matterley Basin 2020.

As it stands, heading into the fourth round of the series in Portugal, Geerts leads the championship with 137 points, 26 ahead of Vialle, with Längenfelder third just a further point behind.

Jago Geerts: “It was a nice weekend, I felt good all weekend on the track. Track was really nice to ride, and it was fun. First race I didn’t have the best feeling in the first fifteen minutes but then I felt better and better on the track, and I could pass Tom, he was also very strong, so it was a nice race. Second race, and then again, the first fifteen minutes I didn’t have the best feeling again and then I was running better and better but in the end, I had a pretty big blister on my hand and I didn’t want to take too many risks in the end.”

Mikkel Haarup: “It’s been a long time since I was on the box, I put in a lot of work in the last couple of months, I’m not surprised that I’m here but I’m really happy with the effort that I put in together with the team and I felt good already yesterday, my pace was better than the other rounds and now we try to keep that going. I felt good on the bike, and we just put in the work this weekend, this result is a big confidence boost for me, as two years without a podium is a long time, even though I previously put in the work but I just want to keep on working and I don’t take it for granted. Hopefully we can get a GP win at some point this season.”