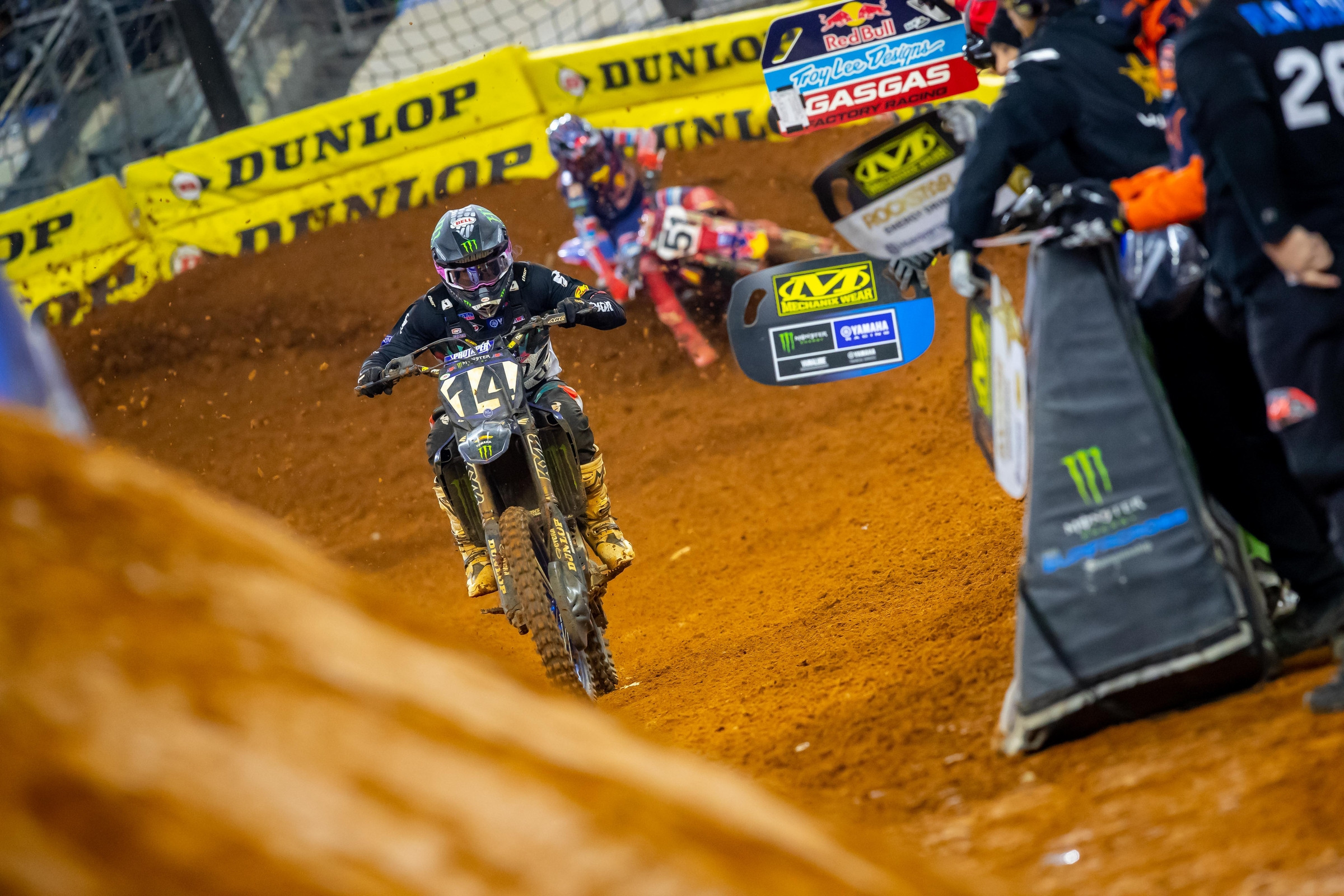 Daytona has the potential to be a big, big night for Eli Tomac. First, he’s got a very good shot at winning Daytona, which is a huge deal by itself, but that’s not all. Right now, Tomac is tied with Ricky Carmichael for the most 450SX main event wins at Daytona with five each, but if he wins, he’ll become the winningest Daytona rider of all time. But wait, there’s more! If Tomac notches the win, it’ll put him at 41 premier class supercross wins, tying him with Ryan Villopoto in fifth place on the all-time premier class wins list. Bottom line, if Tomac gets the W he makes history, in more ways than one. –Aaron Hansel

Malcolm Stewart was oh-so-close to notching a win last week in the first of the three Triple Crown races. The Rockstar Energy Husqvarna Factory Racing rider led for nine laps before he went down when an aggressive pass from Jason Anderson went wrong. Stewart has been extremely close at times but has just been either a tiny bit off the pace, has made a small mistake, or has had incidents like the one in Arlington. Will things finally line up for him in Daytona? –Hansel

If you’re a Cooper Webb fan, things are starting to look a little better. After a bleak start to the season, Webb has been on the podium twice in a row now, and showed fight, which has been his trademark in the past, when he battled Justin Barcia for the win, and got it, in the first 450 race last week. The Webb Wagon isn’t up to its normal pace just yet, but it’s moving much faster than it was just several races ago. We’ll see if Webb can keep accelerating in Daytona. –Hansel

The Daytona track favors riders with strong motocross skills, and as we saw last summer, Dylan Ferrandis is packing a fully stocked arsenal of outdoor assets. Daytona could be just what the reigning 450 National Champ needs to get his supercross season pointed back in the right direction. So far Ferrandis has just one podium, a third in San Diego. Will he take advantage of the Daytona layout to get back on the box? –Hansel

Cameron McAdoo hit the perfect combination of riding well and taking advantage of the misfortune of Austin Forkner and Jett Lawrence, who both went down hard in the third race of last week’s Triple Crown when Lawrence cross-jumped Forkner. As a result, McAdoo is now tied for the lead with Lawrence, which means they’ll both be sporting red plates this weekend. Will McAdoo, who won Daytona last year, or Lawrence leave Florida with sole possession of the championship lead? –Hansel

The Muc-Off/FXR/ClubMX Yamaha squad is all set at Daytona International Speedway with a packed house of six total racers for this weekend. On top of the 250SX East Region riders Phil Nicoletti, Enzo Lopes, and Jace Owen, and full-time 450SX rider Alex Martin, the team will also field 250SX West Region rider Garrett Marchbanks and team trainer/do-it-all man Brandon Scharer both in 450SX this weekend. Marchbanks won the 2020 Daytona 250SX main event but is out of the 250SX West Region title fight and went all-in on this decision to test the waters in the premier class. Scharer spent some time racing the Lucas Oil AMA Pro Motocross Championship last summer and earned national #91 but has been solely focused on training riders on the freshly groomed ClubMX courses in South Carolina…that is until his “day job” is done and he hits the beat-up track to stay sharp himself. Keep an eye out on the blue and white ClubMX Yamaha YZ450Fs today. -Mitch Kendra

As Hansel covered above, it could be a historic night for Eli Tomac if he wins. But if he does not win and someone else not named Justin Brayton wins, it would also make history. Tomac and Brayton are the only two active riders to win a 450SX main event at Daytona International Speedway. Other active riders with a win—Cooper Webb, Ken Roczen, Marvin Musquin, Justin Barcia, Jason Anderson, and Chase Sexton—have yet to win a 450SX main event at the speedway and are looking to claim P1 on the board at the end of the night. Or as Hansel touched on, could Malcolm Stewart or Dylan Ferrandis, the 2021 450 Class Pro Motocross Champion, snag their first premier class main event win here? Entering today, seven different riders have earned their first premier class win at the speedway. Could Stewart or Ferrandis be the eighth? -Kendra

In the 250SX East Region, the only four active riders to win at the speedway are Cameron McAdoo, Jordon Smith, Austin Forkner, and Jeremy Martin—and the latter two are out with injuries. If anyone besides Lawrence (who has four 250SX main event wins to his name now) McAdoo or Smith (both have won at the speedway) wins the 250SX main event to earn their maiden 250SX main event, it will be only the sixth time in history a 250SX rider’s first win came at Daytona International Speedway. Someone like RJ Hampshire (fourth in 2020) or Pierce Brown (third in 2021) or Stilez Robertson (second in 2021) comes to mind when thinking of a possible first-time winner tonight. -Kendra

As mentioned above, Jason Anderson has not only yet to win a 450SX main event in Daytona, but he has only finished in the top three one time (in 2017). Even though he sits second to Tomac in points, with the way El Hombre has been riding in 2022, it is tough to be against him. At the 2020 event we saw an epic battle between the top two in points—Tomac and Roczen—who were tied entering the night. Tomac caught, passed, and held off Roczen at the very end to take the points lead (we all know what happened the following week…). Hopefully we can see another battle by P1 and P2 in points here today. Maybe Anderson earns his first Daytona 450SX win and closes on Tomac in the standings. -Kendra

You might have missed it, but in 2020 female Jordan Jarvis made history racing in the 250 Class of Pro Motocross. Raced with the SGB Racing/Maxxis/Babbitt's Kawasaki team, Jarvis raced the second moto of the Florida National as an alternate, finishing 32nd. Weege wrote:

Our Davey Coombs reports that the last time a female competed in motos was Doreen Payne in the 500 class of the Denver National in 1983, when the 125, 250 and 500 classes all competing on the same day. That is considered the only other time a female raced in the motos in the “modern era” of the series.

At the 2021 Washougal National, Jarvis finished 36-30 for 34th overall. Now, Jarvis is back on Yamahas (as she was in 2019, her first year of attempting the 250 Class of Pro Motocross) with the Riding On The Edge Racing team. Today, Jarvis is looking to qualify for the 250SX Class aboard her #301 Yamaha YZ250F. Will JJ continue to write history amongst the boys? - Kendra

“Super excited to finally be able to announce that I will be back on Yamahas riding for a new team this year. Super thankful for the @roteraceteam and the opportunity they are giving me and ready for the year ahead. Currently I’m doing some supercross prep and will make my sx debut at Daytona supercross at the beginning of March. This is the only sx I will be doing this year because of such a late start in training but I am doing all of the pro nationals again. It’s been a while since I’ve been on Yamahas but I started my pro career on a Yamaha and I’m thrilled to be able to continued it on a bike I was on for so many years. Thank you to everyone who has supported me up to this point and I thank the new sponsors for everything they are allowing me to do this year.”