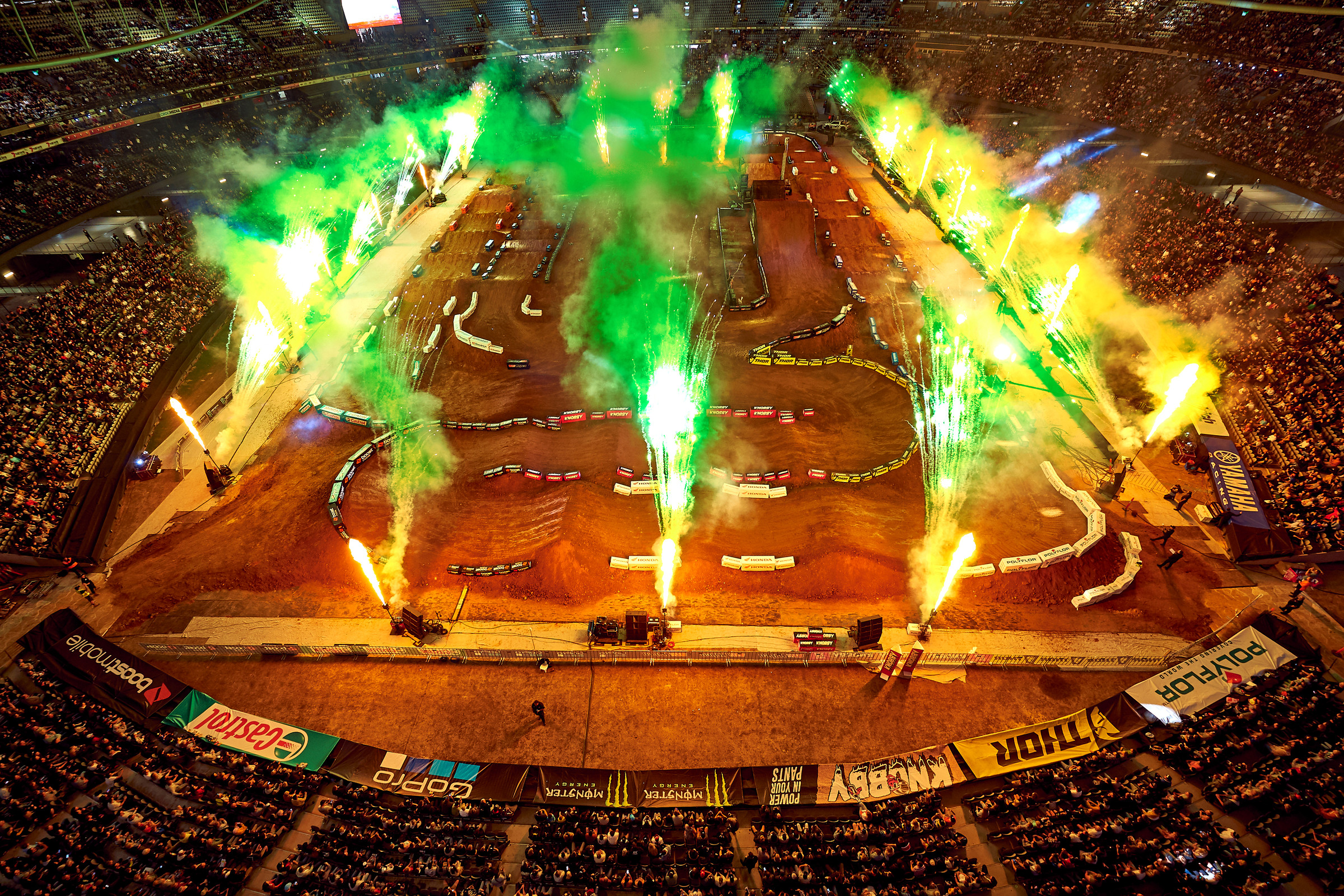 In June 2021, the Fédération Internationale de Motocyclisme (FIM) announced its relationship with Monster Energy AMA Supercross (produced by Feld Entertainment) had come to an end. Not much changed on the front end of the show, aside from Monster Energy AMA Supercross dropping the official “An FIM world championship” phrase and lack of FIM logos on structures at the races. The American Motorcyclist Association (AMA) stepped up to become the sole sanctioning body for 2022 and beyond, fully taking over the responsibilities it had been sharing with the FIM.

Then in September 2021 it was announced the FIM was seeking a promotor for a world supercross championship, which was secured in December by Australian group SX Global. We reported: “SX Global, an Australian based company, has been selected to ‘manage and promote the FIM Supercross World Championship over the coming decade.’” The SX Global group has promoted several events in the Australian Supercross Championship for the last several years and those events had brought in big-name U.S. riders such as Chad Reed, Justin Brayton, Jason Anderson, Joey Savatgy, Josh Hill, Mitchell Oldenburg, Chris Blose, and more in their most recent run in 2019.

Now, several months later, we have received an announcement from SX Global that has unveiled more details—even a plan to race this fall. The FIM Supercross World Championship will “annually take place in the second half of the year,” states the release, with five events from September through November of this year. Then in 2023, the series will “expand annually between June and November.” The plan is for the events such as the AUS-X Open (also run by SX Global) to become part of this FIM Supercross World Championship schedule and sanctioning.

Now there are a few things to note: Monster Energy AMA Supercross is annually from January through May, then there is about a two-week break before the Lucas Oil AMA Pro Motocross Championship kicks off in May and runs through late August. In Europe, the FIM Motocross World Championship (MXGP) tends to run from February through September. For this initial five-round series it appears to be a test-run since pieces to the puzzle are coming together late. However, in 2023 this new world championship will more than likely racing overseas during both the Pro Motocross season in the U.S. and the MXGP season in Europe.

Not only are there details for the series, but we also received another press release that announces more details on Mubadala Capital, the asset management subsidiary of Mubadala Investment Company, which is now the funding sponsor for the all-new series.

According to the press release, “In total, more than $50 million has been designated specifically for team and rider support over five years, and “The global series will feature the richest prize purses in the sport’s history, with a total of $250,000 up for grabs at each event.”

There is a lot to unpack here, and many details (including dates and locations) are still to be announced, but the formation of this world supercross championship is coming together rather quickly.

Queensland, Australia–SX Global, the Australian company that recently earned the exclusive rights to manage and promote the FIM Supercross World Championship, today unveiled plans for the comprehensive global championship series. Featuring an independent team-ownership model, unprecedented financial support for teams and riders, expanded opportunities for global and local sponsors and innovations to elevate the broadcast and in-stadium experience; the FIM Supercross World Championship represent the most progressive and ambitious platform to elevate the sport and expand its appeal across the world.

The series will feature a highly exclusive structure, with only 10 team licenses available to independent owners, and an unparalleled level of financial support for teams, including seed funding for every team entering the series, appearance fees at every event, and logistics and freight support throughout the series. In total, more than $50 million has been designated specifically for team and rider support over five years. In addition, the independent ownership model opens the door for significant sponsorship opportunities on global and local-event levels.

The global series will feature the richest prize purses in the sport’s history, with a total of $250,000 up for grabs at each event. The FIM Supercross World Championship will follow the established two-class format, with each team fielding four riders – two in 250-cc class, and two in the 450-cc class. Furthermore, every event will allow for two wild card entries in each class, providing opportunities for local riders and sponsor-driven exemptions and round out the 22-rider field. SX Global also plans to deliver an elevated experience for fans, through unique race formats, broadcast innovations, and in-stadium attractions that elevate the overall entertainment experience.

Plans for the global Championship series were underscored today by the news of Mubadala Capital’s investment in SX Global, bringing an unprecedented level of financial support and development resources on behalf of the FIM Supercross World Championship. Mubadala Capital, the asset management arm of Mubadala Investment Company, a sovereign investor with $243 billion in assets under management, brings a wealth of experience in funding the development of global business and sports ventures.

“There is a massive fanbase and untapped demand for supercross outside the United States and backed by the financial support and significant resource of Mubadala Capital, we intend to feed that, bringing the sport to new regions through the most exciting and lucrative World Championship series in the history of the sport,” said Tony Cochrane, President of SX Global. “We have created an entirely new model for supercross – one that emphasizes expanded financial support and opportunities for riders and teams, expanded opportunities for sponsorship and an elevated experience for fans.”

The FIM Supercross World Championship will annually take place in the second half of the year, ensuring a complimentary relationship to the Monster Energy Supercross Series in America. With plans for five events from September through November, 2022 will serve as a “pilot” season, allowing the series to establish itself and build momentum. 2023, and subsequent years, will see the series expand annually between June and November.

While the supercross series in the United States has firmly established itself as the preeminent platform for the sport, there has yet to be a definitive global series to lay claim to a true FIM-sanctioned World Championship. Highly successful events are held throughout Europe and Australia every year, normally around September–December. However, these events are not currently linked by any official FIM ‘championship’ status, and this remains a significant untapped opportunity for the sport’s ongoing credibility and evolution, as well as a significant opportunity for riders and teams to expand their influence and financial prospects.

“Over the years, there have been various attempts to build a true World Championship series for supercross, but none of them have succeeded, due to deficiencies in funding and resource, lack of global and regional relationships and a variety of other factors,” said Adam Bailey, Managing Director, Motorsport, for SX Global. “Our team possess the necessary supercross and international event background, relationships and expertise, and the funding to make this World Championship a reality.”

SX Global brings a team of highly qualified motorsports and entertainment executives, armed with the experience to successfully deliver a series of this magnitude. SX Global President, Tony Cochrane, spearheaded the development and success of V8 Supercars, an Australian-based auto racing series that became one of Australia’s most successful motorsports, eventually expanding with events in Shanghai, the United States, Bahrain, Abu Dhabi and New Zealand. In addition, proven supercross event veterans Adam Bailey and Ryan Sanderson have been the driving force behind Australia’s highest-profile supercross offering, the AUS-X open. The duo has promoted five years of consecutive sold out AUS-X Open events in Sydney (2015-2018) and Melbourne (2019), along with successful events in Auckland, New Zealand in 2018 and 2019.

“Our entire careers have been driven by a passion for motorsport and entertainment, and our motivations are as pure as they come – to continue to evolve and elevate our sport and its incredible athletes to new levels of global relevance and success,” said Ryan Sanderson, Managing Director, Commercial, for SX Global “Our aim is to take the amazing sport of supercross global and reveal its greatness to millions of new fans all over the world.”

Based in Queensland, Australia, SX Global is a collective of world class sports marketing and entertainment experts who operate globally within the motorsports and entertainment industries. Considered the “founding father” of the modern era of Australian motor racing, Tony Cochrane leads the SX Global team as president, bringing more than 45 years of experience in developing and managing successful motorsports series and events. Managing Directors,  Adam Bailey, a former competitive rider, and Ryan Sanderson, bring extensive proven experience in supercross event development, management and promotion after five years of successfully delivering the largest action sports and supercross event in the Southern Hemisphere, the AUS-X Open.

The second press release we received:

Queensland, Australia—Mubadala Capital, the asset management subsidiary of Mubadala Investment Company, one of the world’s leading sovereign investors with US$243 billion of assets under management, today announced its investment in SX Global, an Australian company established to develop, promote, and commercialize the FIM Supercross World Championship.

Mubadala Capital’s investment will support SX Global’s expansion plans for supercross and its efforts to capitalize on the exclusive rights it has secured from the Fédération Internationale de Motocyclisme (FIM) to manage and promote the new FIM Supercross World Championship, bringing the exciting sport of off-road motorbike racing to fans across the globe in a new competitive format.

“Our commitment to SX Global and the FIM Supercross World Championship builds on our strategy and track record of selectively investing in premier content properties with strong global appeal,” said Adib Martin Mattar, Head of Private Equity at Mubadala Capital. “We expect that our investment in SX Global will introduce the exciting sport of professional supercross to a global audience and build lasting value by delivering an authentic, exciting and fan-centric experience.”

SX Global’s President, Tony Cochrane, added, “We’re proud to partner with Mubadala Capital, a company that shares our vision and global aspirations for the FIM Supercross World Championship. With the international reach, resources, and business building experience of Mubadala Capital alongside us, we’re looking forward to establishing FIM Supercross World Championship as a leading global motorsport and entertainment property.”

In December 2021, the FIM awarded SX Global the exclusive organisational and commercial rights to stage, manage and promote the FIM Supercross World Championship. Under the leadership of the SX Global Team, and with the financial backing and support of Mubadala Capital, Supercross will become a true global sports property, competing on a legitimate international platform for the first time in history. The FIM Supercross World Championship will commence in late 2022.