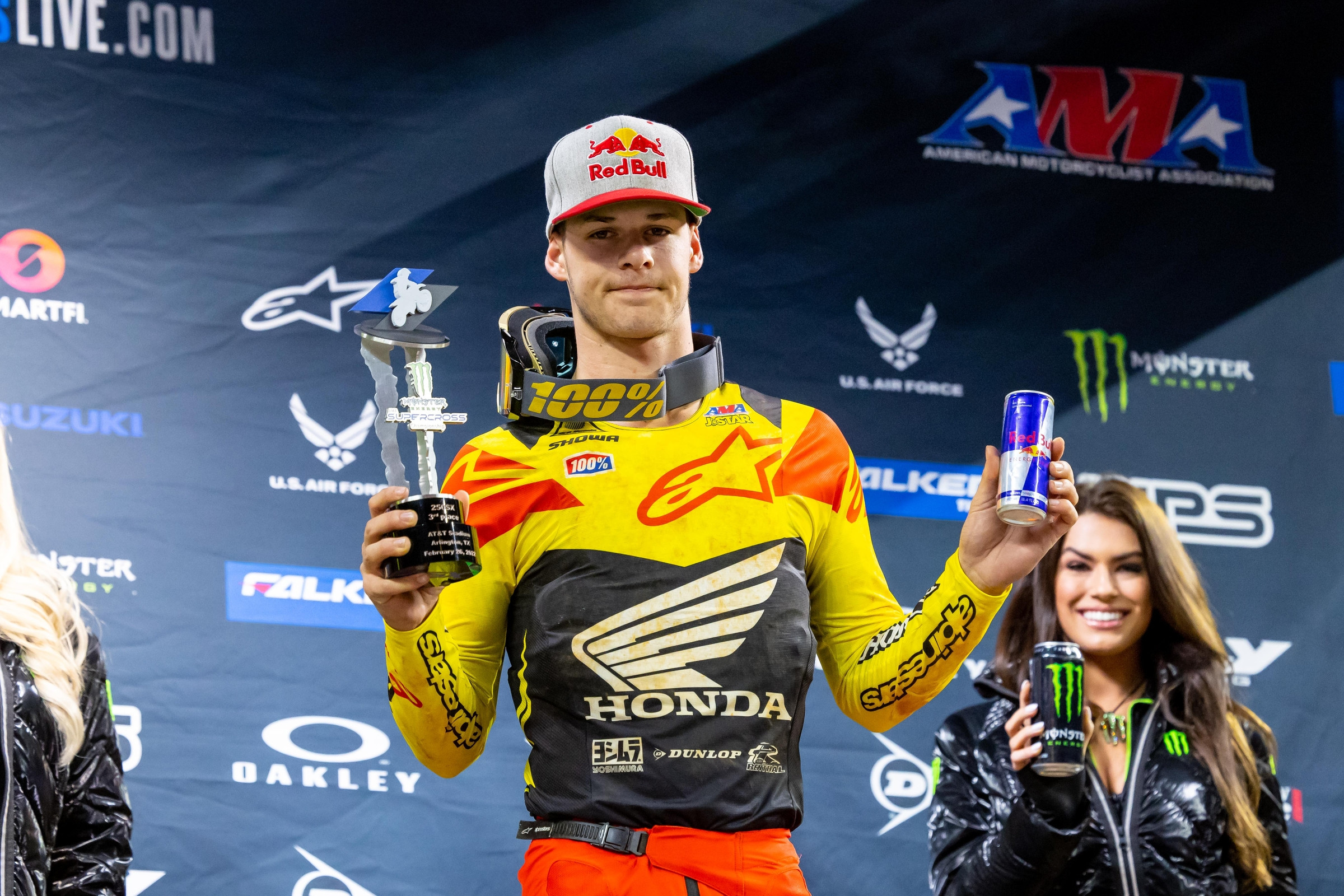 The Moment Forkner Down, Lawrence "Gutted"

So much the for the slow burn at last weekend's 250SX East opener. Round one seemed to push the "can't win the title in the first race but you can lose it" narrative, but it all broke loose at round two in Arlington, starting almost immediately. Honda HRC's Jett Lawrence led the first race from the start, then crashed in turn two.

Monster Energy/Pro Circuit Kawasaki's Austin Forkner then won the first race, setting himself in good position for the night. In the second race Lawrence roared back with a win. Then it went wrong (again) in race three when Lawrence crashed at the front of the pack (again) and began logging another huge comeback charge. Along the way he caught Forkner, and it all came undone. Lawrence nearly crashed in the whoops, he saved it, he completed a pass around the outside, but by then was too close to the outside Tuff Blox and hit them while launching the finish line jump. He cross-jumped into Forkner taking them both down. Forkner got the worst of it, landing with a suspected collarbone injury. We have not heard an official word yet.

Lawrence was none too happy about his day, showing plenty of remorse for the move when he spoke with the media in the post-race press conference.

Jett, take us through everything that happened there in that wild third race, starting with the whoops, and then everything that happened after that when you were trying to make the pass.
Jett Lawrence: It sucks, what happened. I got wild. I obviously didn’t learn my lesson from the first time I got wild once, and I thought I could balls my way through it. But got a little sketchy in the whoops again. Most people saw what happened after. I don’t really like talking about it much because I feel gutted about it. Just a stupid mistake on my behalf of hitting a Tuff Block and taking out another rider. Just pissed at myself. I really can’t say much. I’m sorry to the Forkner family, Austin, and his chick. I was looking forward to racing him this year, because I think a lot of people can agree he’s definitely one of the most talented guys on a supercross track, he has shown many times. I just feel sick about it, really. I don’t have much else to say about it.

The thing with Forkner kind of happened because of the situation you put yourself in by losing the rear end. That happened in the first moto and the second moto, I believe. Was that just a little bit of the track conditions, or maybe being a little impatient? What do you think?
That’s just me being stupid, really. Not learning my mistake. I did it first moto. Really good start. It’s okay doing it once but doing it twice I feel like then you just have to get the information beat into you. Works for me most of the time. Just me not learning my lesson is the main thing. I wish I didn’t do that because obviously everything else happened the way it did.

Do you think the incident tonight will cause you to change your race craft or your approach, or is this a one-off event or incident that you think you’ll just regroup, and you’ll be back to racing and focusing on your racing next week?
I don't think it’ll change much. That incident was just a quick slight decision, that was a silly decision. So, riding side of things, I don't think I’ll be changing anything. The bike feels unreal. I put together almost what probably could have been three holeshots, except for the second one Stilez [Robertson] just got me. I think the bike is handling great. I’m feeling riding side of things really, really good. I think just the main thing is the decisions. Need to clean that up. I think once we clean that up, hopefully I can be on track and start being up there more so with Cameron [McAdoo] and the rest of the guys and not be back in 20th trying to fight my way through like today.

That last main event, in the last couple laps there it looked like you were throwing everything at this thing. Did you have any idea at the time of which place you needed to be for the position? Or was it just get to the front as quick as you can and get as many points back?
I seen Cameron out front, and I already had in my mind I don't think I can get to him. He had already set sail. So, my main goal was just to kind of keep going. I saw Austin. Jeremy ended up going down across the start straight, so that kind of helped me a little bit dealing with one less guy. Then I was just focused on Austin and just thinking ahead. “Okay, if I get him, then who’s the next person?” I was kind of feeling really good. I can say what I wanted to happen, but you guys seen what happened. Beggars can’t be choosers.

Secondly, have you had a chance to talk with Austin yet or see him after the race at all?
Yeah. I went to the Alpinestars medic place and wanted to apologize. It’s a crappy feeling. I’m pretty sure if you had that happen to you, you’d feel gutted. Maybe taking a guy out in a turn or something, yeah, you’d probably feel not too bad, but taking a guy out like that and injuring someone, it’s a sucky feeling. I don’t wish that upon anyone else because I’ve been the last 30 minutes feeling like crap.

Preparation for next week, shaking off this evening and setting your sights on this championship?
Back to the chalkboard. Same thing I did this week. Really nothing different. Just kind of reset. Pretty wild night for me tonight. Try not to worry about it during next week. I don't think it’s really going to change anything. I can’t change the story. It is what it is. Going to go back, do the exact same thing I did this week and just come into next weekend with an open mind and hopefully I don’t have the same night I did tonight.

Is the plan to ride some outdoors?
Probably not. We got a supercross track that’s pretty soft, so I think I’ll just ride that. We didn’t really need to add a Daytona section, because I think riding outdoors kind of comes naturally to most people, I feel like. I feel like I just need to ride supercross, just get more and more familiar with the bike and the soil and that stuff, and riding some rutted out stuff.