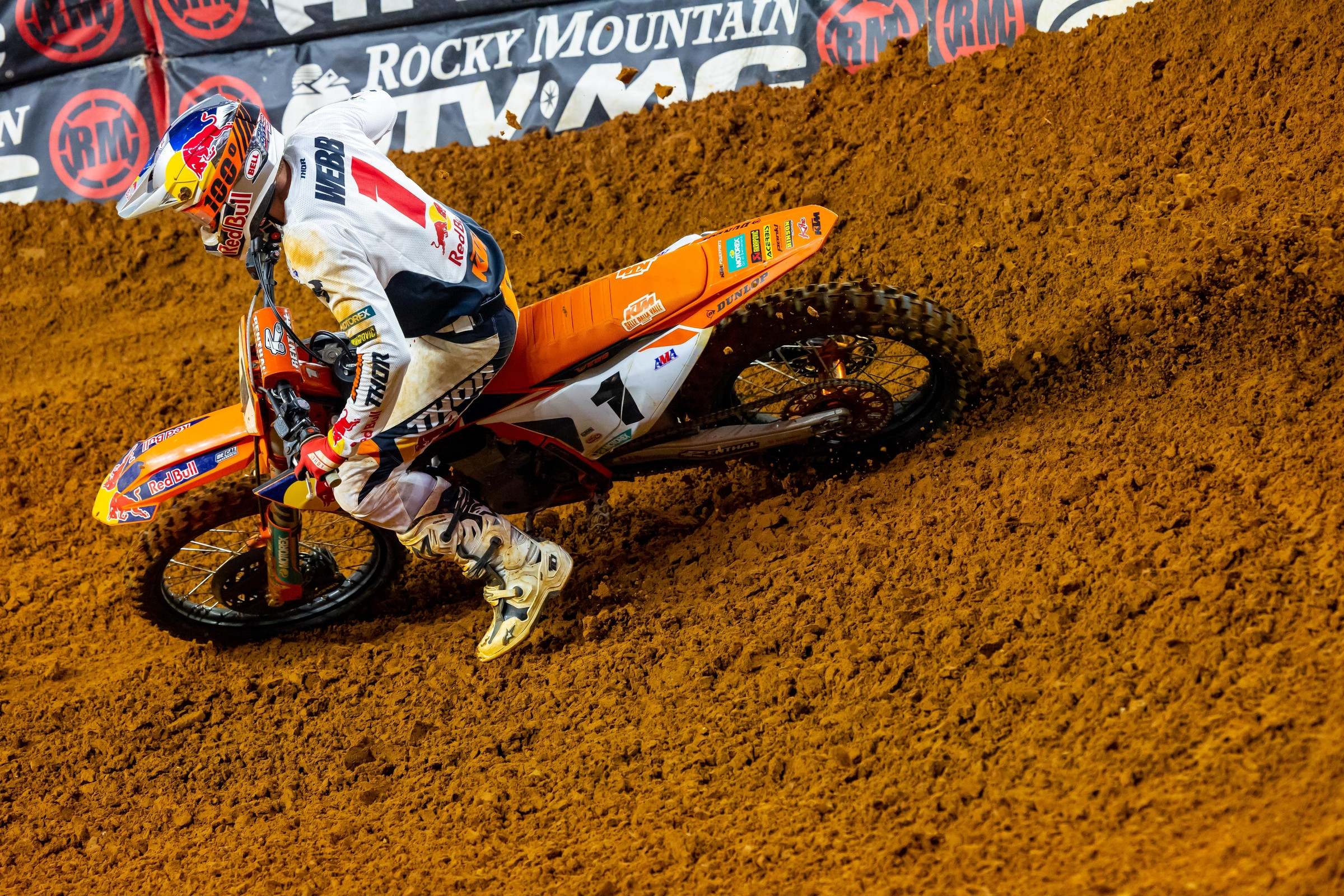 Defending Monster Energy AMA Supercross Champion Cooper Webb has been a key storyline in 2022 as he has yet to win a race in what has now become his longest winless drought in supercross since joining Red Bull KTM in 2019. He finally made it over the line first this weekend in Arlington, though it was just for the race one Triple Crown victory, and he would ultimately go 1-4-4 for third overall on the night. Still though, he’s been much better at both Arlington and Minneapolis over the last two weeks as he keeps getting more and more comfortable on this new KTM. After the race, he spoke with the media about that building process.

Cooper, much improved tonight, it seemed like, riding-wise. The bike setup seemed a little better. Did anything make you angry to get you fired up? Or what was it that made those improvements?
Cooper Webb: I think just being back in the mix last week was a confidence boost and just had a really good week of riding and training. Dallas is usually a good one for me. The first one, got a good start and stayed out of trouble and got my, if you want to call it a win or whatever, which was nice. Then I was in the mix the rest of the night. That last one was a bummer going down in the first turn, but it is what it is. I felt like I rode really well. Obviously made a good charge to be able to get back onto the podium, which was important. We’ll keep fighting. It’s just good to be back in the battle, but definitely want to go after a win here soon.

Much better in the last couple weeks. Obviously, you’ve been talking about changing your program. Is that the difference right now, or is it a combination of that and the bike?
It’s a little bit of a combo. Just for me, getting back to Florida was nice. Just leaving California, all the noise for me was tough. So, just kind of being back with the guys back at 83 [Compound] and riding with Jett and training with those guys has been good. Just kind of getting back to things. Obviously, we’ve made improvements with the bike, but overall, I think just being back in Florida and working on things and working on what I needed to be better, which is now kind of improving the results. We’ll keep working and like I said, try to get up a few more spots.

Last week on the podium you thanked Darren Lawrence. This week we sort of caught wind that you may have parted ways with Michael Byrne. Are you able to talk about that at all and anything that’s going on in your camp at the moment?
Yeah, a little bit of change, for sure. Just back at the farm. It’s good. Like I said, I went there to be able to ride with the Lawrences and that’s what we did this week. He’s obviously done well with Jett and Hunter. I think he’s definitely a smart guy. It was definitely a good week, like I said. We’ll keep going from there. We’ll see what happens.

We’re at the halfway point in the season. You are building back to where you want to be. So then, what is the game plan for the next few weeks?
Yes, similar. Just keep on keeping on. Like I said, I feel like I’ve got the bike in a good spot. I’m in a good spot mentally and physically. Just keep plugging away. I’d love to get a win here soon. It’s round eight or nine and still hasn’t happened. Feel like I’m back to that mindset, and that’s the goal. Even tonight, I was pretty bummed after going down and just not being in the mix like I was in the first two. Overall, I’ve got to take the positives of tonight and the day that it brought, but as a rider, you expect the most out of yourself. You want to be up top every time you’re on the gate.

The race chasing down [Justin] Barcia was vintage Coop. We kind of all knew what was going to happen. You had a few laps to go, and you made that pass happen. Talk about what it was like to be back in the heat of that battle, and also that sweet pass on the over/under bridge.
Yeah, it was good, like you said, to kind of just be back up front and going for a win. Late race, feeling good, feeling spunky. Just kind of felt like it was meant to be, I guess you could say. Obviously, there was some carnage that put me in that position, but it’s racing. It was nice, like I said, even though it’s not a real main event to just get a win in general and be back up front and in the mix is nice.

The whoops section seemed like you guys were even and then you set him up over the over/under bridge?
Yeah. I actually felt really good on the whole track. Bam-Bam is a tough one to pass, especially when you pass him, he’s coming back for vengeance. So, had to kind of plan it. Made the pass and set myself up to not get passed in the next turn and was able to hold it down, which is nice.

What adjustments have you made to the bike over the last couple of weeks, as well as what adjustments have you made to your riding style to better adapt yourself to this bike?
We changed about everything, to be fair. We’re on something totally new, which has given me some confidence. Then I think the bottom line is I just was slow. So, we really worked on getting faster this week and just improving in some places that we need to be faster. Like I said, I feel like it translated a little bit more today. There’s still room to improve and I need to be better. Sometimes it’s breaking down what you really do need to improve and actually improving it and not just trusting the process, or whatever you want to call it. Like I said, I think it was good to look in the mirror and be back in Florida and get to work. No excuse. Just get better and try to turn this season around.