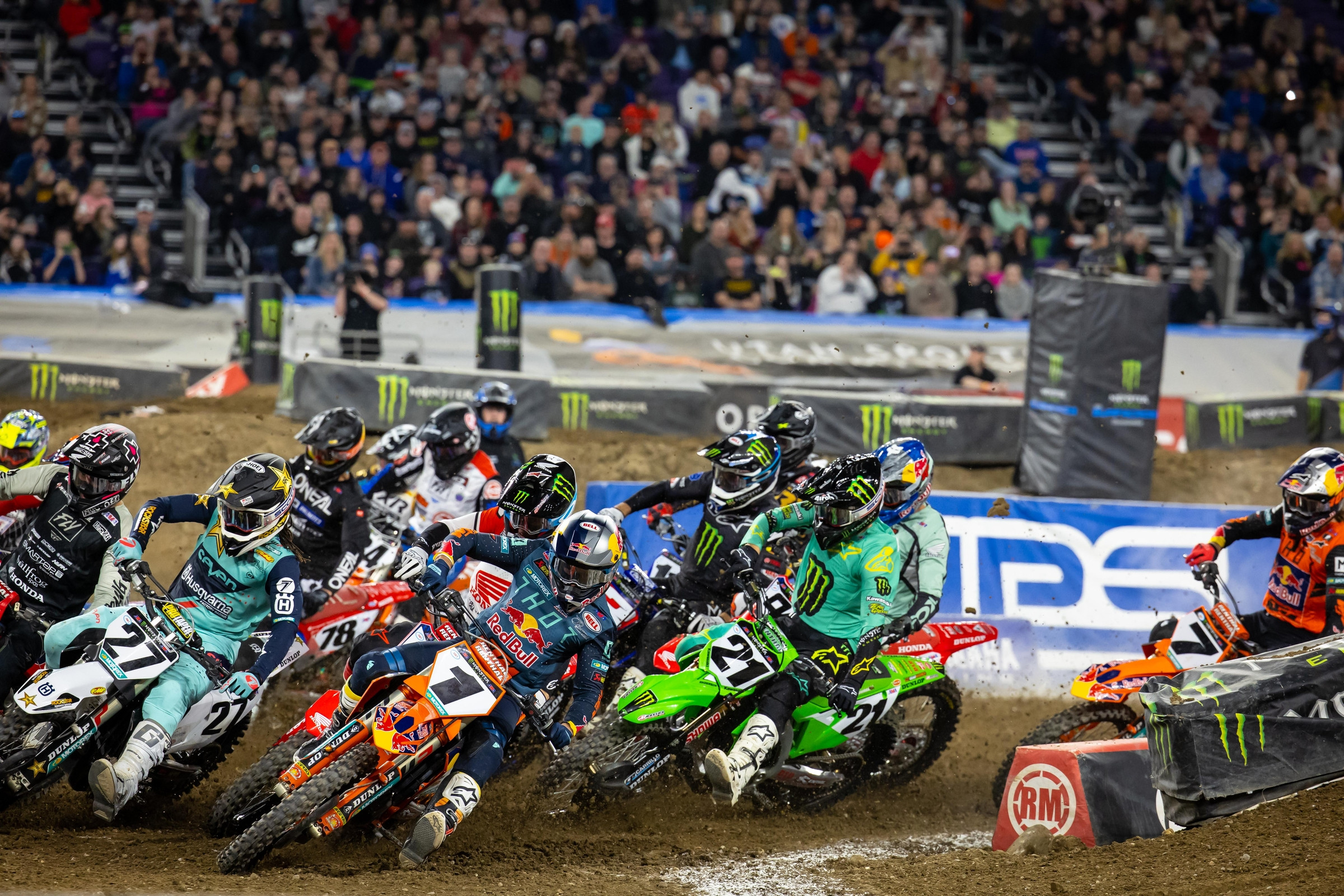 The switch to the east offered hope for some in Monster Energy AMA Supercross that things could turn around. They actually did, but more in the way it shook up the front runners than it was as a boost for those looking to improve form. Jason Anderson won the race, the third win of the season for him, but the big story was Chase Sexton, who was absolutely set to win the event until he crashed violently while alone out front with just two minutes to go in the race. Anderson knew what to do from there and held on for the victory, but Sexton goes from a race win to a massive hit in points as well as some bumps and bruises, although we have heard he escaped major injury.

The other shakeup went to series leader Eli Tomac, who got a bad start. His teammate Dylan Ferrandis got sideways in the whoops and came into Eli’s line, knocking him down accidentally. Eli had to regroup in last and managed to salvage sixth. Combined with Anderson’s win, the points gap now narrows to just three-points between the two long-time competitors.

Anderson said he felt good in the main but on the tricky, rough and rutted track, the race more more about keeping focus and avoiding the big mistake. He had accepted second until Sexton fell, and by the way Anderson nearly landed on him moments later as Sexton was down on a jump, and Anderson didn’t have time to react.

“It was hard to make up time, and I feel like to make up time you’re on the edge and a couple of times I was taking more risk than I wanted to,” said Anderson, of Monster Energy Kawasaki. “Obviously you want to win but you want a good result for the long game. Chase was riding really well and I just wanted to stay close unless something happened and it did.”

As for those looking for a boost, defending champion Cooper Webb can say he got one, as he was more competitive here than he was at any round since the season opener, where he finished second. He matched that here and looked improved, although still not at race-winning strength. Webb holeshot the main and was passed by Sexton, Anderson and Malcolm Stewart, but then Stewart and Sexton crashed. Webb actually ended up just 1.9 seconds down on Anderson at the finish.

“I got to give it up to the team they came up with a package that helped me quite a bit,” said Webb. “It was good to go back to Florida a bit, felt a bit more homey, being from the east coast. Going back after crap results out west, clear head, new tracks, new people. “The Man’ [Roger De Coster] came up with it. Rog went to work, I didn’t get to try it all week, I tried it today. I felt better today. Our old bike, I gelled so well, I felt like it was built for me in supercross. You’re learning non stop, we race on so many soils and dirt. You think it [new bike] works so well, then you struggle.”

“There’s a lot man,” said Webb of the negativity that was beginning to surround his season. “There’s a lot of noise and it can really effect you, maybe it does maybe it doesn’t. You need to not doubt yourself and maybe I started to go down that road and second guess things. It’s tough, our sport is up and down and can throw a lot at you. Just never give up and keep fighting the whole way.”

Even better for the Red Bull KTM group, Marvin Musquin took third for his first podium of the season. Marvin had been pretty quick at the last three races, but he wasn’t happy about his late race pace in this one, as Webb and the lead group got away from him. He nagged the podium thanks to the Stewart and Sexton crashes, but Musquin gifted away a potential podium last week when he crashed.

“I changed nothing,” said Musquin of his setup compared to Anaheim 3. “I felt like at Glendale I had the possibility to get on the podium and I went down, and last week too. It’s been a little crazy but I’ve been enjoying it, to be honest. Today I felt like the speed was good, the track was really tough and technical. I didn’t get a good start in the main, I don’t know how but I made it happen in the first few corners. I kind of lost ground when I was behind Cooper, then Mookie went down and I had to roll the triple when he went down because they turned the light on. To get a podium tonight, they’re tough to get so I’m happy, but a little disappointed with the second half of my main event.”

Stewart has been very good lately on his Rockstar Energy Husqvarna, he was set for a podium until he washed out in a corner late. Fifth came the consistent Justin Barcia on a Troy Lee Designs/Red Bull GasGas. Then came Tomac in his charge from last.

Aaron Plessinger was seventh, Tomac’s last victim. Then came Ken Roczen, who was looking for a solid night to fix his recent slump, but crashed in the same section where Stewart did and lost a few spots. Ferrandis came back to ninth and Justin Brayton was tenth on a SmarTop/Bullfrog Spas MotoConcepts Honda.

The 250SX East Championship is now underway, and Jett Lawrence lived up to the hype by taking the victory on his Honda HRC machine. Lawrence made a quick pass early on Austin Forkner and was able to inch away throughout the main.

“I was kind of managing it a little bit,” said Lawrence of holding the lead. “That one rhythm especially on the 250 it was really hard to get the transition on the triples. I would look back and be like “Dammit! Still see green!” Boys were keeping me honest.”

This east division is considered very deep on talent. Lawrence is happy for it.

“I love it,” said Lawrence. “We got into this sport due to close racing and being close to the guys. It’s good racing for us, also, and we have so much respect for each other. We’ll get close but we won’t take each other out. We have all worked our butts off to get here.”

Forkner, who had a miserable 2021 season, was more than happy to accept second. He was especially happy to have gotten the start in the main, an area where he really struggled last year.

“Last year it was a brand new bike and there was a lot to go through,” Forkner said. “Maybe at the test tracks my starts maybe weren’t an issue, but at the races they were an issue. This year we had a nice base setting, yes we did change some things, but a fresh bike, you’re always going to miss something. I definitely felt under the ball last year with a couple of things, but especially with starts. To have that feeling like I had in 2019 and 2020, where you’re just ahead and you see no one next to you, that felt good.”

“I made a push about halfway, maybe 8-10 minute mark,” said Forkner. “Then he [Lawrence] matched it. I think maybe I was a little off pace in the whoops, but it was working and I didn’t think it was worth changing it. I did just kind of bring it home a little bit. I was just watching where Cameron was I didn’t want him to get that close. Especially with the way that heat race went, definitely smoothed it out for the main.”

Forkner’s Monster Energy/Pro Circuit Kawasaki teammate Cameron McAdoo was third, making another rider who was happy to start the year with a solid finish.

“I was trying to make a push toward Austin, I feel like I made a big mistake about halfway,” said McAdoo. “We had 20 laps, a lot of laps, and the track changed a lot. It was really important to lock in. I don’t think you can just say  you’re going to try to survive this track. You had to lock in.”

No drama in the 250s. Jeremy Martin and RJ Hampshire also rode well and took fourth and fifth. Pierce Brown showed speed but had a terrible start in the main and came back to sixth, with Stilez Robertson seventh. Enzo Lopes, Levi Kitchen and Phil Nicoletti rounded out the top ten.