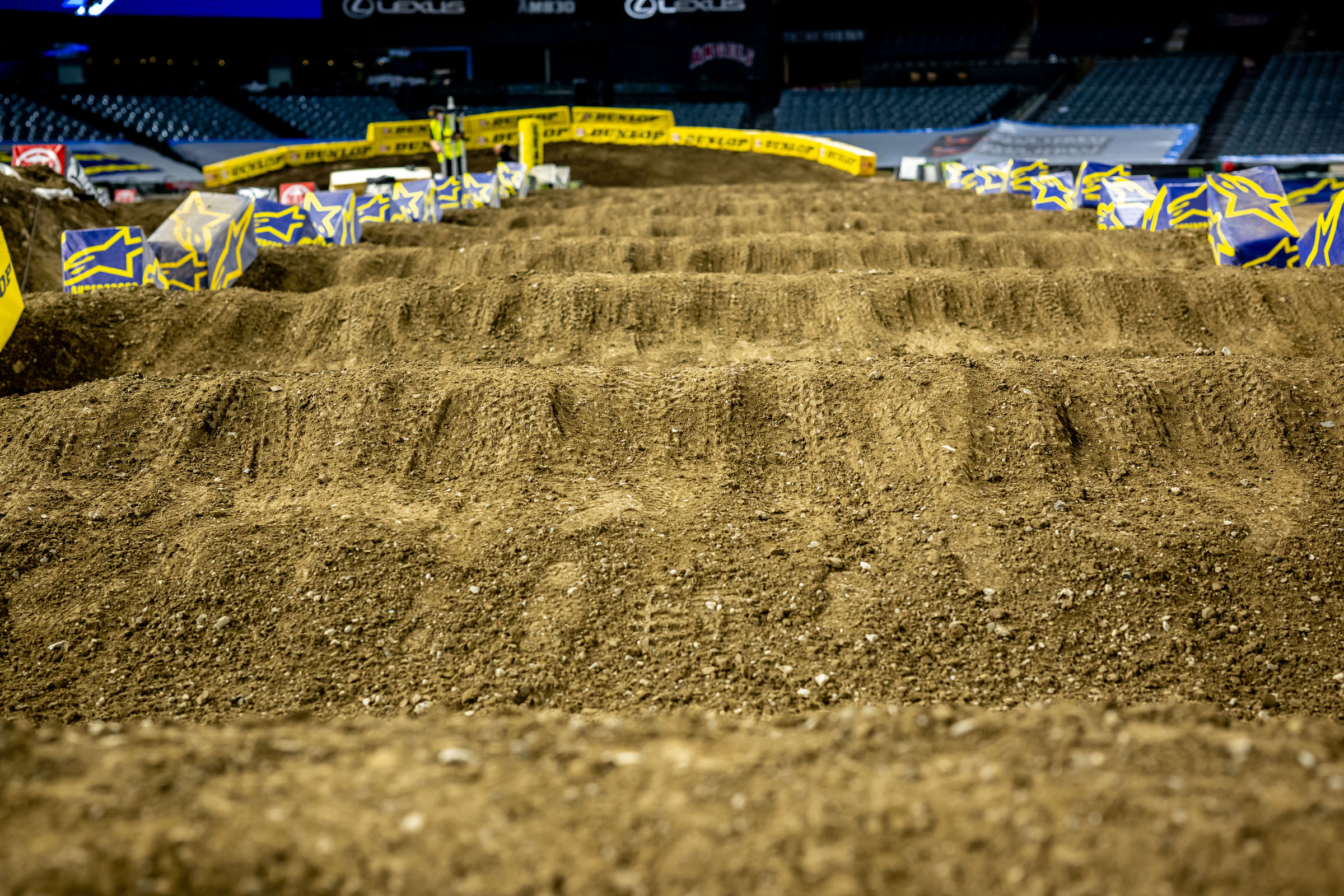 The California/West Coast swing has come to an end for Monster Energy AMA Supercross in 2022 as the Anaheim 3 Supercross is now behind us. There were some big championship swings in both classes at the sixth round and we fired off some questions to long-time pro Jason Thomas to see what he thinks of it all as the series gets ready to head east.

Jason Anderson and Eli Tomac are the first two 450SX riders to two wins on the season. Will this be the title fight moving forward or do you still think there’s a couple other riders who will get in there?

We are about to enter a big shift as far as the series goes. With the move away from the West Coast tracks and into colder, wetter East Coast tracks, I’m not ready to rule anything out just yet. If we leave Minneapolis with exactly the same thoughts as we left Anaheim 3, then I will be ready to narrow down this title fight to a select few.

The 250SX main event saw a graveyard in the whoops, what about them made everyone struggle so much?

They were tall, far apart (the gap from tip to tip), and extremely cupped out. The uneven edges at the top of each whoop were incredibly hard to find any predictability on. When the whoops get that cupped, the rear tire doesn’t get a consistent surface to drive from. That sends the rear of the motorcycle in several directions when the only preferred direction is forward. The distance between whoops is also important as small movements become large movements with more distance and time to move. For example, if the rear of the motorcycle wants to kick sideways but the next whoop is very close, it doesn’t have as much time to move to the side, lessening the severity of the situation. With a larger gap, there is more room to really get off kilter and things escalate accordingly.

If you’re Christian Craig now and going to test outdoors on a 450 in the coming weeks, what percentage are you riding at to ensure you don’t crash?

Riding a motorcycle is inherently dangerous. There is a fine line, though, where Christian can manage risk knowing the 250SX West Region title is waiting for him. I think the correct approach would be to put in the work to be prepared (long motos), test to find comfortable settings, but always leave margin for error if things get dicey. Championships are few and far between. Sacrificing 2 percent of your potential at Hangtown by managing risk over the break is a no brainer when considering that this championship is almost a given if he stays healthy. A rider of Christian’s talent can ride without putting himself into a dangerous situation, especially if that’s the paramount goal.

Is the panic button now firmly pressed for Ken Roczen and Cooper Webb?

I think it has been pressed by many. I have held firm on waiting for the shift east before I press it for Webb. I am giving it one more week on the defending champ. For Roczen, I am there, though. He doesn’t look right to me. I don’t see the confident Kenny I am so accustomed to. I see a rider searching to find a missing ingredient. This is arguably the least confident Ken Roczen I have ever seen.

Eli Tomac’s starts are seemingly the best he’s had in his career the last few weeks. What do you believe is the key catalyst that is working for him on Yamaha that didn’t work at Kawasaki?

Glendale notwithstanding (different dynamic there), they’ve been a bit better this year. I think his confidence is at an all time high which always helps on starts. I think the Yamaha might have a bit more torque than his prior engine (educated guess) which could be helping get him off the line a bit quicker. The converse side of this is that Jason Anderson is starting up front every time also, as did AC9 before his injury. They are on Eli’s prior steed, proving that it isn’t just a fundamental leap forward in technology that’s to blame.

It’s no secret KTM is struggling with bike setup for Webb and seemingly so for Aaron Plessinger as well, so what did you see out of Marvin Musquin that made the difference this week?

It’s impossible to know what’s going on internally with their bike struggles. Mookie [Malcolm Stewart] looks great on a similar chassis, as well. Deano [Dean Wilson] has been improving, too. With the motorcycle being all new, there are likely many more questions than answers each weekend when issues pop up. There often isn’t enough data to turn to when riders want to make changes. That evolves over time but in the early days of a new chassis, it can be one big guessing game.

Vince Friese earned his first podium in nearly eight years, and it was his best career finish as well. Aside from the drama surrounding him, is he riding the best he’s ever ridden?

He’s riding really well! It’s also a shame because instead of talking about just how great he’s been this year; we have been distracted by all of the other drama. He was a solid 450 guy for the last several years, but those results don’t grab headlines. I don’t necessarily think he’s riding much better than he was before, I think he’s just in a different dynamic with 250 riders. He was battling with the likes of [Justin] Brayton, Deano, [Justin] Bogle, [Joey] Savatgy, and others week in and week out. Those guys are all 250 race winners (and also a few champions). In that light, he’s just continuing the great riding that’s been going on for years. The situation is just much different this year.

We’re finally leaving California and heading east this weekend. If you think back to before the season and compare it to where the points are now, what has been your biggest positive surprise and negative surprise in the 450SX class?

I had Jason Anderson being much better this year but not this good. He’s surprised even those who were looking for a return to excellence. He’s a threat to win every time the gate drops.

I think Roczen has to be the biggest letdown thus far. He did win the opener but the drop-off since then has been as dramatic as I can find words for. Even worse, he looks very unsure of himself out there. I have never seen Roczen look so indecisive. It’s bizarre.