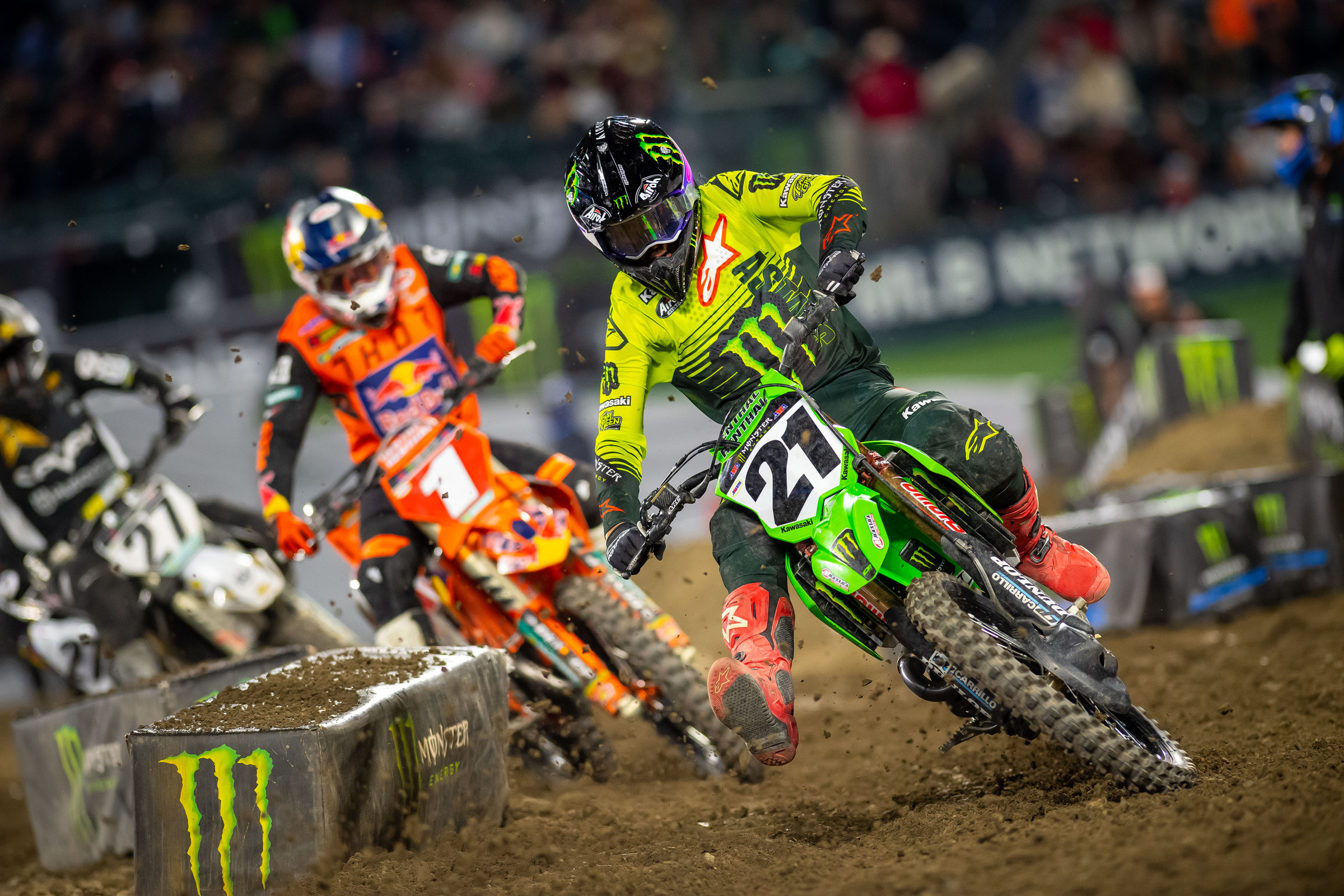 There was a time when Jason Anderson was known for being ultra-aggressive and pulling the old smash-and-bash when it simply wasn’t necessary. It hasn’t been quite as prevalent in recent years, but for a while it seemed like it was a staple of his race craft. Well, the tables were turned last Saturday night—Anderson hit the dirt twice, courtesy of Malcolm Stewart and Justin Barcia. At some point you’d expect some payback from Anderson, although on Instagram he and Barcia squashed anything before it could gain traction. Barcia is now even a member of Team Fried! But that doesn't mean it won't be interesting to see how Anderson chooses to race over the next few rounds. –Aaron Hansel

Anderson wasn’t the only rider on the receiving end of some aggressive block passing. The 450SX Class was chaos! Just ask Stewart, who as mentioned, dished it out and took it when Marvin Musquin charged hard into a corner and took both of them out. Stewart was extremely unhappy and made sure to let Musquin know about it after the race. Will that irritation linger for round two, or will Stewart keep it clean in Oakland? –Hansel

By now everyone knows Adam Cianciarulo is dealing with a grade three AC separation, which led to a pretty substantial fade late in the main event last weekend in Anaheim. But, all things considered, it wasn’t a bad night for Cianciarulo, who finished eleventh after running as high as second. Yes, that’s a pretty significant droppage of anchor, but even with a bum shoulder he still ran really well early on, and avoided crashing, something that’s been the bane of his existence in years past. Our own Jason Thomas wrote he believes AC’s separation anxiety will subside in the upcoming rounds. Will it be noticeably better in Oakland? –Hansel

It comes as no surprise that Ken Roczen won the season opener. After all, it’s the fourth time he’s done it, and he’s not exactly a stranger to winning races. That said, the win seemed to come as a surprise to Roczen himself, whose December was plagued with sickness. So much so that his riding time was reduced drastically before last week. And if you were watching the broadcast you probably heard Roczen say to his mechanic afterward, “Can you believe that?” Clearly, Roczen isn’t hurting for speed. If he keeps getting out of the gate this well it’s going to be tough for the competition to track him down. –Hansel

One rider who did have a shot at taking the win away from Roczen was his teammate, Chase Sexton, who was applying heavy pressure to Roczen early in the race. Roczen fought back, and Sexton ended up crashing away his chances at victory. It’s not the first time we’ve seen this from Sexton, and afterward Sexton himself even remarked, “It's not the first time I've been the fastest but didn't win." The silver lining for Sexton is that he still managed to land in fifth. Who thinks Sexton wins in Oakland if he doesn’t crash? -Hansel

For the first time in six years, Eli Tomac rolled to the line at the opening round of Monster Energy AMA Supercross not on a Monster Energy Kawasaki. With his new Monster Energy/Star Yamaha Racing machine beneath him, expectations were high as Tomac garnered a lot of off-season hype about his look of comfort on the Yamaha. Even so, Tomac looked similar to the Tomac we’ve seen many times at the opener in that he just couldn’t quite get the ball rolling. That’s okay though, because if history shows us anything, Tomac will get the train moving as we get into the season and perhaps the rutted soil of Oakland will be a good spot to get right back on track. – Kellen Brauer

Christian Craig is poetry in motion on a dirt bike and his day at Anaheim 1 was a poem that Shakespeare himself could have written. Craig was fastest in free practice, topped both qualifying sessions, won his heat race, and won the main event at the opener. He made it look so easy that it’s already becoming difficult for pundits to figure out who really can challenge that level of dominance out of Craig. If he can do something similar again this weekend in Oakland, look out, because it may quickly become curtains for the rest of the season. – Brauer

Michael Mosiman, Jo Shimoda, and Nate Thrasher are three factory 250SX riders who would much rather forget Anaheim 1. Thrasher and Shimoda hit the gate in the main event and started last and last-er, whereas Mosiman fell on the opening lap in the whoops and found himself back there with Shimoda and Thrasher. They all three made steady progress through the field but eventually Thrasher and Shimoda would both crash again. Mosiman recovered for a sixth while Shimoda crossed in 7th and Thrasher was left down in 12th. All three expect to factor in for race wins and the title fight this year and each will need a big turnaround in Oakland. – Brauer

Team Solitaire/Nuclear Blast Yamaha’s Robbie Wageman and Muc-Off/FXR/ClubMX Yamaha’s Dominique Thury both finished inside of the top 10 at Anaheim 1. For both (Wageman 8th and Thury 9th), the results were also career best finishes which are not commonly seen at the opener. Wageman was able to get a great start from the outside when a lot of riders hit the gate and he held on with the lead group for a while whereas Thury raced into the top 10 with a strong ride. Both riders have a huge boost then to build on for the rest of the season and the goals will certainly be higher moving forward. – Brauer

Wish You Were Here

The unfortunate story from Anaheim 1 of course was the heavy crashes for Colt Nichols and Jalek Swoll. Neither rider will line up in Oakland this weekend after it was confirmed that Nichols had surgery on Monday to repair two broken arms while Swoll announced he had a concussion and a sore wrist and team confirmed to us that he would be on the sidelines for an unspecified amount of time. With two big name factory riders missing, the opportunities open up for others to get into the mix, but it is unfortunate that we won’t have Nichols nor Swoll at the races for a while. – Brauer