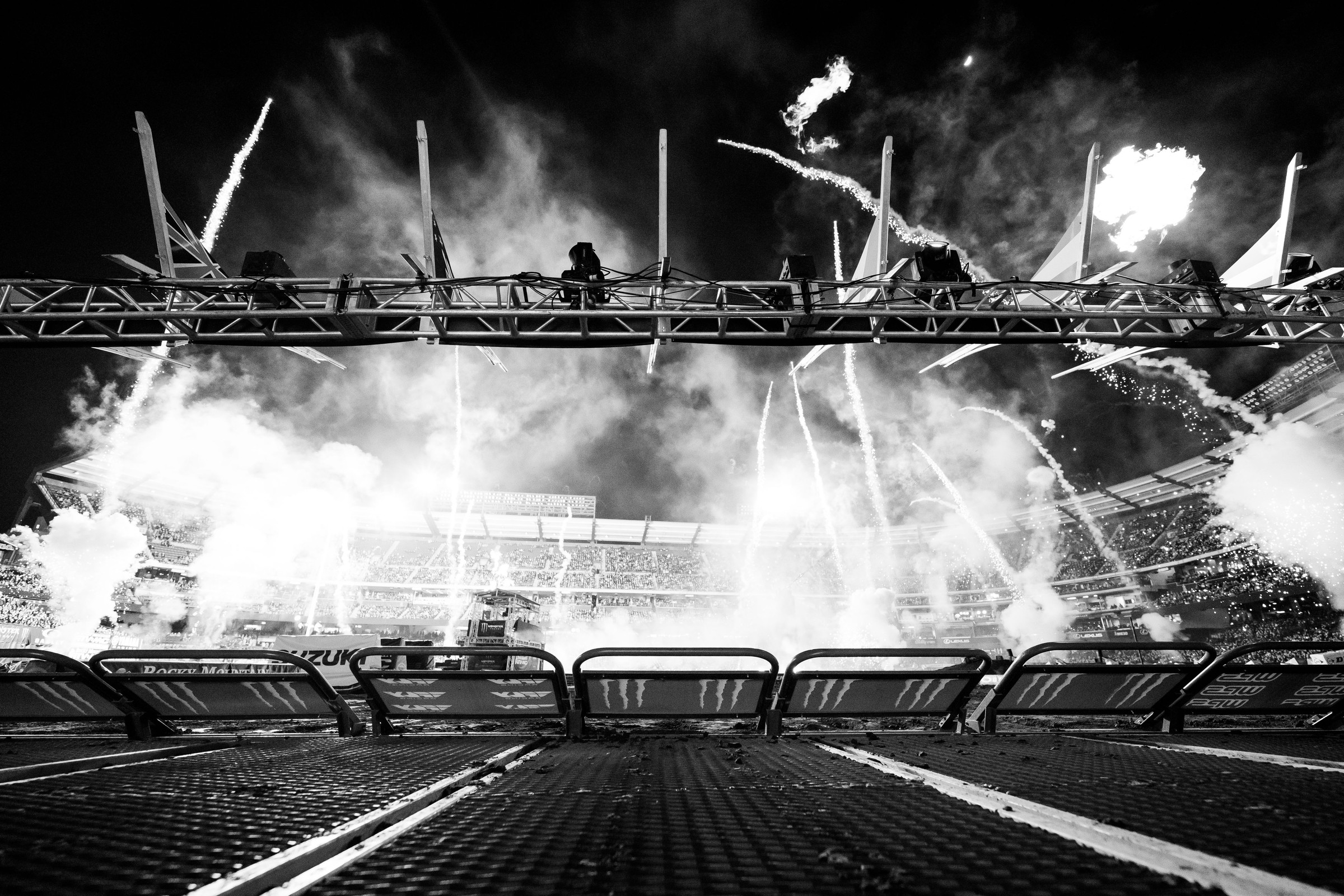 Round two of Monster Energy AMA Supercross takes us to Oakland, California. The bay area stop is a popular one and draws fans from up and down the West Coast. While the stadium might be on the aged end of the spectrum, the racing is usually nothing less than spectacular. Oakland’s dirt often offers great traction and allows riders to get aggressive. Being round two is also a much-needed exhale from the pressure cooker that is Anaheim 1. We may get a more realistic picture of who is going to make 2022 a step forward in their process. There is simply too much chaos at the opener for me to take the results at face value. Oakland can help paint the picture that the rest of the series may bring.

The start in Oakland is similar to what we saw at round one. It’s a short chute located in the middle of the racetrack. The first corner is a long left hander but flows into the outside lane of the track in a more traditional manner than last week. The first rhythm section is fairly straight forward with either a wheelie-double-triple (wheelie over the first bump or simply roll over it), or some may be relegated to a slower 2-2-2.

A bowl berm (with net) fires riders into the first whoops section of the Oakland course. With the whoops being so quick after the start, watch for riders like Christian Craig try to make quick passes if they aren’t immediately out front. With a bowl berm on the exit of the whoops, block passes will likely be common as well, especially with the finish line jump immediately after.

A long sandy left-hand corner will surely fill riders’ goggles with sand as they look to cross back over the start (and past the mechanics’ area). A combination of six jumps are up next and to make things more interesting, they slowly curve left in their trajectory. Logic would say that going 3-3 would make the most sense here but with the curvature, I’m thinking it will be trickier than it looks on paper.

The next two rhythm sections are the “meat and potatoes” of the Oakland layout. It will be critical to nail both of these every lap as one miscue could cost serious time or position. The approach to the first rhythm should be fairly straight forward but could be difficult to execute. Riders will step on-step off, triple (3-5-3), then triple onto the next tabletop and step off into the bowl berm. The difficult part will be in Oakland’s dirt deterioration. Ruts up the ante on long rhythm sections.

The second rhythm is spaced a bit wider and will be a bit more forgiving because of it. The ideal line will be to triple out of the berm, triple again and then if someone’s up for it, quad into the next rolling right hand corner. With the final jump being smaller than the rest, it will be possible, but I also could see riders opting for the safer 3-3-3-1, especially in a main event situation.

The next flat right hand corner leads to a steep double before crossing back over the start and into a fast right hand bowl berm. That berm sends riders right back over the start but this time, they actually double across the full width of the start. Hopefully the takeoff is not super steep, otherwise riders will be really sent skyward to clear that gap.

After landing said sky shot, a flat left hand corner sets riders up for the second set of whoops. Oakland whoops are often tricky as riders will be constantly weighing the blitz-versus-jump option. The dirt deterioration makes it difficult to blitz late in the race but switching to the jumping option too early can mean higher lap times. Watch for riders like Cooper Webb and Marvin Musquin to be the first to make the jump while Ken Roczen and Eli Tomac hold out until the last possible lap. A 90-degree, left-hand corner sends riders over a jump and back onto the first rhythm section of the layout.

Ken Roczen told us about his December struggles, lack of preparation, then promptly went on to win the race. He looked great all day and night.

Chase Sextonshould have been on the podium, but his inexperience got the better of him. He sent clear shots across the 450-class bow, though.

Cooper Webb didn’t grab any headlines. He didn’t have anyone jumping out of their seats. He really wasn’t even the fastest of riders on Saturday. Oh, yeah, but he got second place and his best A1 finish ever. Good luck to everyone trying to beat that guy over 17 rounds.

Justin Barcia didn’t get his fourth consecutive opening round win, but he was still very impressive. I don’t have him in this title fight, but I do have him being a podium threat most weekends.

Christian Craig laid waste to the 250 West field after his main rival Colt Nichols exited the series. If he is patient, he could win most of these races.

Dylan Ferrandis picked up where he left off last year’s supercross series. Fast, yes, but also unable to execute without mistakes. It’s fair to mention he had a rear brake issue so let’s see if he can turn it around in Oakland.

Eli Tomac’s sixth place finish was likely not what BluCru had in mind for his debut but it’s really just par for his January ways. Watch for him to consistently improve as the series goes on.

Adam Cianciarulo is fighting through a grade 3 shoulder separation. His 11th place finish isn’t indicative of what he’s capable of. Look for more pain this weekend but as we get to rounds ass and four, he is going to make big steps forward.

Colt Nichols had a huge get off while leading his heat race and was left with two arm injuries for his trouble.

Mookie and Marvin appear on Dr. Phil this Friday to sort out their domestic differences. Dr. Phil focuses in on whether brakes are a metaphor for something deeper.

The AMA moves to officially change the rulebook. According to Addendum 263.1, all aggressive passes resulting in a downed rider must be immediately followed by a purchase from rider A’s merchandise store.

Jim Croce’s infamous song “You Don’t Mess Around with Jim” is remastered to include instigating contact with Justin Barcia.

Ken Roczen reiterates how bad he feels just before the main event and goes on to win by 33 seconds.