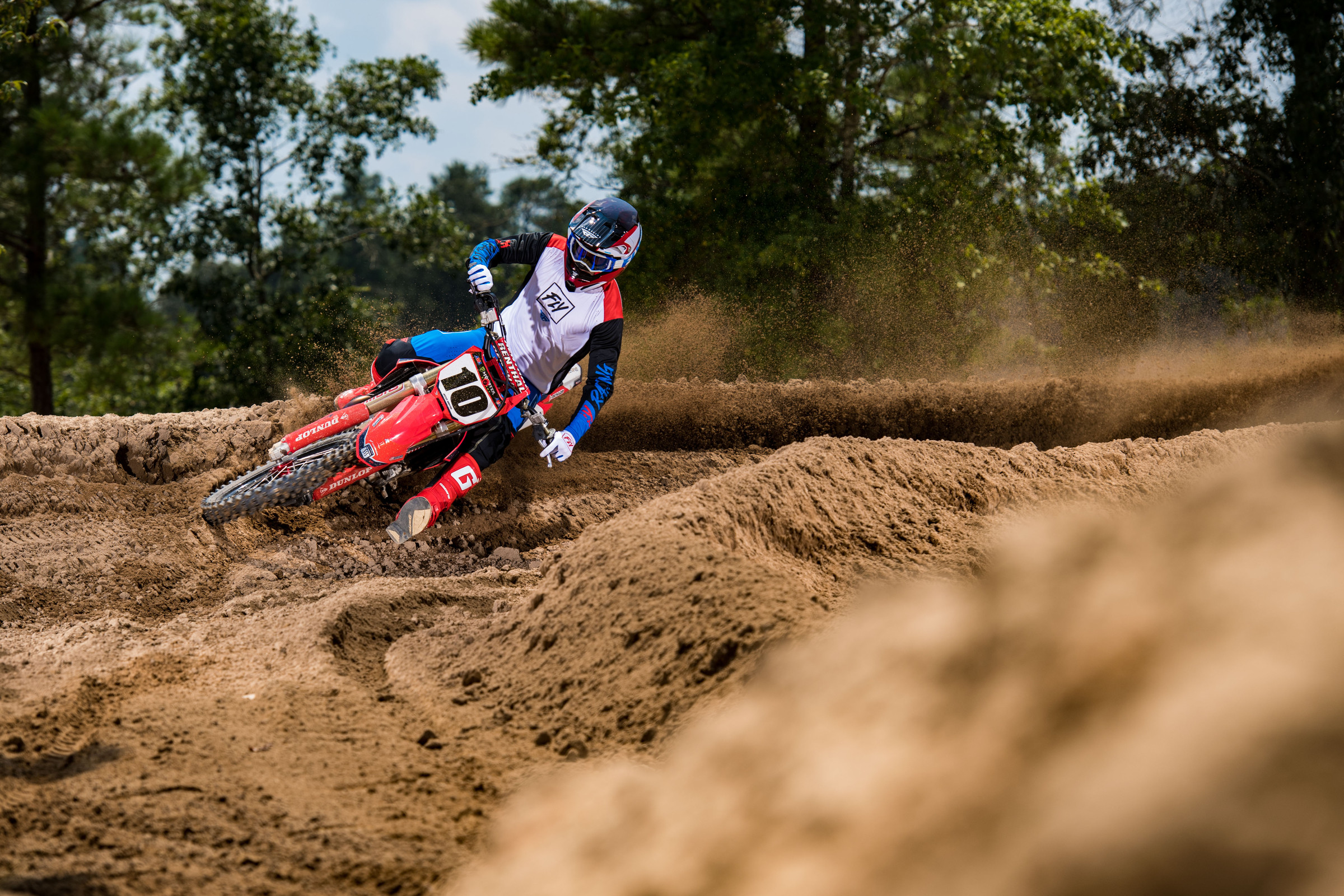 He’s now 37 years old, and Justin Brayton is still here racing Monster Energy AMA Supercross and doing so at an elite level. He took a podium in the second round of 2021 and had some solid races after that, so things were looking good until reality caught up to him. He suffered a bunch of big crashes due to bike failures, and at one point he was ready to retire.

Instead, he decided to make one more run in 2022, with the SmarTop/Bullfrog Spas/MotoConcepts Honda team. At yesterday’s press conference, he finally came clean that the 2022 season would be his last. Also, he used his veteran knowledge and experience to explain a lot about how racing works. The man that sits 10th all-time in career 450SX points looked back fondly at his memories over the years while also detailing his expectations for 2022.

Not exactly your first rodeo rolling into an Anaheim 1, but definitely an off-season different from years previous having had some time off the bike. How do you battle that and still stay ready perform your best and what’s expected of you not only by the team but your own expectations as well?
Justin Brayton: It’s been quite a bit different, obviously. Normally I race a lot and come Anaheim 1 I’m kind of mid-season form. Last year that wasn’t really the case either and I came out second round on the podium and leaving Houston I was top five in points after the first three rounds. So, I don’t really think it matters. Like you said, it’s not my first rodeo. That’s the biggest thing. I just lean on my experience. It’s kind of just another gate drop. I think that helps me a lot at the first few rounds. I think a lot of guys are dealing with nerves and their bike settings and stuff, where I kind of know what to expect from Anaheim or the first few rounds with the track builds and how the dirt is and typically what you expect out of the first few rounds, and where you’ve done all your testing. I’ve done testing in California a lot previously. Typically, you’re a little bit too soft at Anaheim, and vice versa if you’re testing out on the East Coast. Just really lean on my knowledge and experience and try to get some good starts. That’s the main thing. However, many guys on here tonight that are all capable of doing really well. You just got to execute the day and lean on my experience.

[Laughs] At the ripe age of 36, can you still bust out the biggest jumps on the track?
[Laughs] Absolutely. It’s kind of funny. The older I get, the more fun it is to dissect the track. I’ve ridden so many layouts and I can always kind of lean on other tracks, or if there’s a quad or something, I’m like, that’s like this jump three years ago at this place. It's fun to show up to a new track each and every weekend and try and figure it out. It’s like putting together a puzzle.

Flashing back to last year, Dallas is probably not a night that you would like to remember. I know the weeks leading up to it were difficult. There were some things out of your control and some frustrations. There were question marks if you were going to come back. I’m sure anybody in this room who has rode and had a big one, whether you’re in the hospital, you’re traveling home, you question your motivation, the reason you do this. You yourself have a family, so that comes into play. How hard was it to come back again? What ultimately has brought you back for one more season?
Great question. To be completely honest, leaving Dallas I was done. But I also know I’ve been through injuries enough in this sport that you can’t really make rash decisions when you’re in that spot. Some of these happen out of my control, and the things that I was doing that were in my control, I was doing at the highest level. Like I just mentioned Houston. I think that was overlooked tremendously. I was 36 years old and to come out at round two with a stacked field and be on the podium and leave Houston top five in points, I don’t think anybody would have guessed that. Then things just started to go crazy, honestly. Just had bike issue after bike issue. It was out of a lot of people’s control, to be honest. I’ve definitely had to work on myself, work on my mind. Crashes like that where the bike locks up in the air and you get spit right on your head, it’s traumatic. It definitely took some work to get through it, but I also leaned on the season I was doing at the first several races. To come back, I feel like I don’t really have unfinished business. I’ve done everything I’ve wanted to do pretty much in the sport. I never thought I’d qualify for a supercross main, let alone win one. I just feel like I want to go out really on my terms and hopefully not crashing on the track. Having a solid season and having my family a part of it is the main thing. Having such a good platform with this Honda 450 is great and makes it fun do to do the work and be at the races. In summary, it was really difficult but I’m excited to be here. It took a few months to really make the decision, and here we are.

Can you say without a doubt this is your last year of Monster Energy Supercross? If you have a great year and the MotoConcepts guys and Smart Top guys are willing, and you’re willing, or 100 percent this is it?
This is it for sure. This is it for full-time racing. It's really hard to say those words, but it’s my last full-time preparing all off-season and doing all 17 races. I can’t say that I might not come back for a few. There is one thing that I have been thinking about. If I do all 17 this year, I’ll be like six away from 200 starts, so maybe I pick six the following year. But for sure it’s my last full-time season. I just think it’s time. I just want it to end on a good note. I don’t want it to end bad. Most things end because they go badly. I don’t want it to go bad and then have to end. I’m on a great team, great motorcycle. I still feel like I can compete on the highest level. To go out with a bang and a couple podiums would be awesome.

I’ve been watching these Anaheim 1 replays that Feld has put on YouTube. You’ve been in so many of these races from 2010, 2012 to now. What is it about this current crop of riders that makes them so competitive? Is it a trait that everybody has that other people didn’t have? What has been the biggest change you’ve seen over the course of your career?
I think there’s a couple things that have changed. I really believe that everybody’s equipment is really on a level playing field now. I think if you rewind to 2010 or even 2012, I think we all knew that certain teams lacked, or certain riders we knew even on factory teams that didn’t have the correct training program. Now everybody is on a great motorcycle. Everybody trains super hard. There are really no secrets in the training world anymore where then there still kind of was a little bit. No more, “I wonder what this guy is doing or that guy is doing.” I just always think then you had your A guy and a B guy on the factory teams. Now a lot of teams are two A guys, and both of them are past champions or both of them are title contenders. Also, you have guys like myself that sick around longer. There’s a lot of guys in their late 20s and early 30s right now, where then there wasn’t. You were at your peak early 20s and mid-20s. Then we’ve seen RV and Dunge and those guys that exited early when they were 26 or 27. I think between those few things, it’s just more competitive. It just is. We always say deep field and this and that, but I remember the days when I could go down in the first turn and still get a top ten. Those days are few and far between now. That’s the biggest thing.