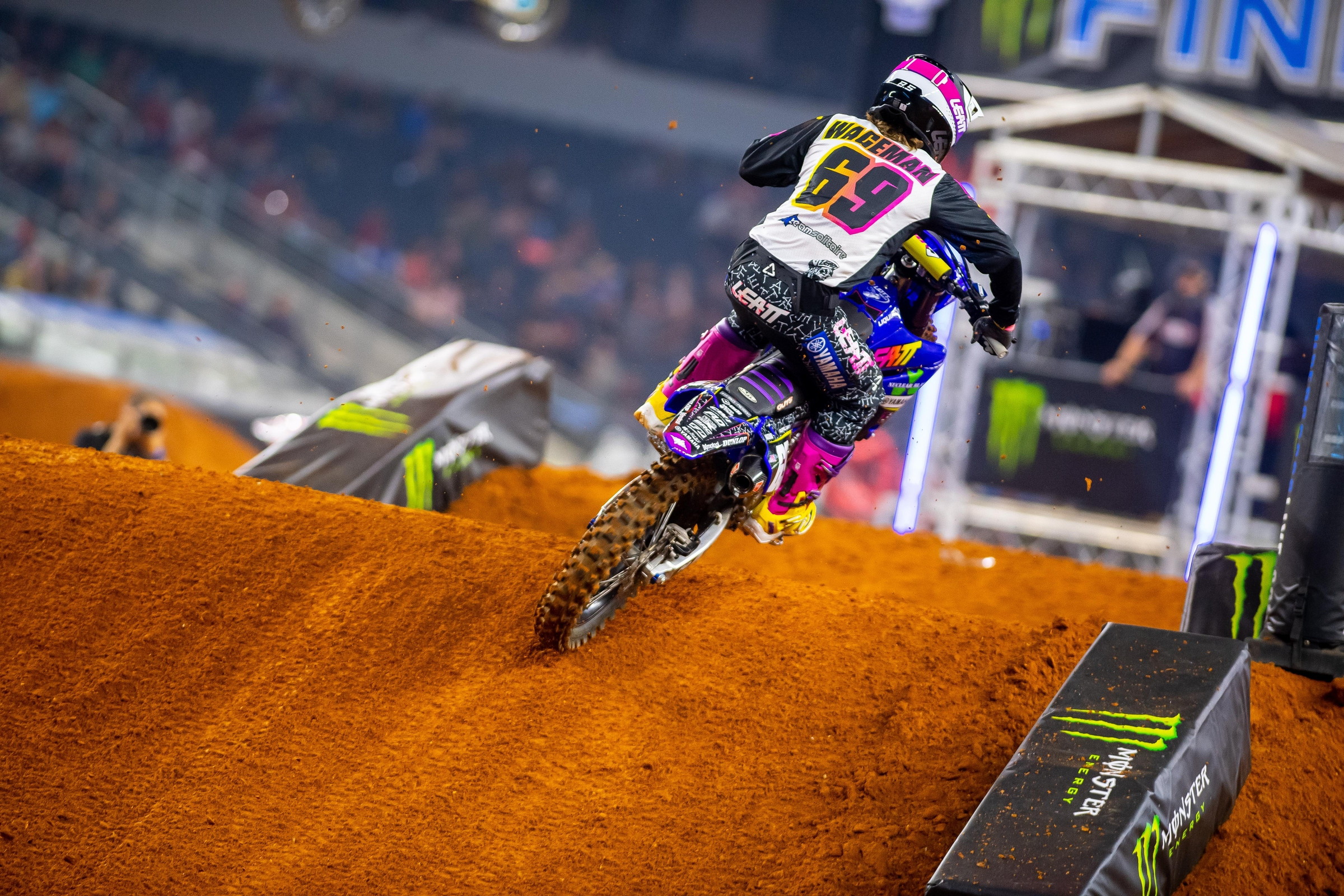 The Wageman brothers (RJ and Robbie) were raised in Southern California and grew up racing. Their father, Russ Wageman, raced the Lucas Oil AMA Pro Motocross Championship from 1982 through 1986. They've been around the sport as long as they can remember. Robbie remembers begging for a bike at two or three years old and receiving one for Christmas. They’ve been riding and racing ever since and have even gone head-to-head in Monster Energy AMA Supercross.

“At A2 in 2020 we raced side by side in Angel Stadium in a heat race,” RJ remembers. “It's our hometown stadium which was cool! He beat me which was not cool.”

The Wagemans are in a small group of brothers who have raced at the highest level and will once again line up for another year of supercross in January. Robbie will be back with Team Solitaire/Nuclear Blast Yamaha, while RJ will be racing a 450 in the first six West Coast rounds. To learn more about this duo we got on the phone to ask them some fun questions.

Racer X: Who's more skilled on a dirt bike?
RJ: Oh dude, that's hands down Robbie. He's sweet on a dirt bike. He makes it look really easy. I watch videos to see how I can get better.
Robbie: I would say me. Obviously, I'm going to pick myself.

Who was better in school?
RJ: Me for sure. I actually enjoyed going to school. I'd say he was the opposite. Anytime he had the opportunity to miss school or an assignment, that was Robbie.
Robbie: That's definitely my brother. He's got me all day in the book smarts.

Who's your mom's favorite?
RJ: This is pretty funny. We have three older sisters. Over holidays we talk about this kind of stuff. They say whoever's name she uses in passwords is her favorite child. A lot of her passwords have my name in it. I don't think she has an actual favorite. But I do so many more things around the house. I imagine I've got to be the favorite.
Robbie: I would say it's pretty even. I'll say me because I'm the youngest. But RJ does a lot around the house.

Who can throw the best whip?
RJ: It depends on the jump. If there's a really clean jump, I can throw it really sideways. But Robbie can hit a ramp and he has sweet style. I'll be nice and reasonable and give it to him. But that doesn't mean I can't throw a whip.
Robbie: Me all day long. I got that all day.

Who's best with the ladies?
RJ: Haha, well I have a smokin' hot girlfriend. So, consistency wise, myself. As far as quantity over quality, I have to give that to Robbie. He's pretty smooth with the ladies. He's got a fair number that stop by the house.
Robbie: I'd say that's me, too. RJ is more the one and done kind. His 'spit' game is a little off. When he was raised, he was a little more awkward than me.

What's the goofiest character trait of your brother?
RJ: I don't know. Nothing stands out.
Robbie: He's pretty much just a goofy person nowadays.

Who can change a tire faster?
RJ: One hundred percent me. I have way more mechanical skills than he does. I can practically take apart an engine and rebuild it.
Robbie: My brother all day. I'm still learning that. I just get on it and twist the throttle.

What's the best concert you've been to?
RJ: I just saw Luke Bryan and that was a rad time. The way he interacted with the crowd and got everyone going was cool. My second favorite was at Stagecoach. Two years ago, I watched Old Dominion at the front of the stage and that was rad, too.
Robbie: Post Malone. He was really good. He sounded better than on the album.

What's your brother’s greatest fear?
RJ: He's going to get so pissed, but his greatest fear is to get the holeshot at a supercross. That's so rude to say.
Robbie: Probably prepping the track in a skid steer.

Watch the video below to see the Wageman brothers interview one another after the Fox Raceway 2 National (starting at the 9:30 mark).

What's the dumbest thing you've ever seen your brother do?
RJ: I can't think of anything dumb he's ever done.
Robbie: Wow, there’re a lot of dumb things he's done. Sometimes he doesn't really think with his brain before he does something.

What's the biggest fight you two have been in?
RJ: We don't really fight, but when he first turned pro, we were doing a local race. He rammed me pretty hard in a corner. That was a big argument. Not a fist fight, but I'd be lying if I said we didn't push each other a little bit post-race. It was more me. There was a lot of verbal communication and some bad language.
Robbie: Probably right when I got on big bikes. We were racing at REM, and I came in for the pass and we rubbed each other. He was not happy with me. He came in and kicked me. He was pissed. We have a good relationship and usually only fight over dirt bikes.

Who would win in a foot race?
RJ: That's a great question. I always tell him I'm in better shape and I train harder. I'm going to go with me on that.
Robbie: He has way longer legs. He's got me on that.

Who would win in Connect Four?
RJ: I feel like I could out smart him. Use a little strategy or reverse psychology. I got him.
Robbie: Oh, me for sure.

Say something nice about your brother?
RJ: Obviously I love the guy. We have a great relationship. We have a kick ass time together. I appreciate everything he does helping me with stuff on the track. He gave me some pointers through the whoops, and I appreciate that.
Robbie: He's always fun to be around. I look up to him. He does a lot of good things, he's hard working. Five or six years ago, I wasn't that hard working. I looked up to him and wanted to follow in his footsteps. I wanted to be better as a person in my regular day life.

What's your favorite flavor of R-Jerky?
RJ: Sweet and Spicy has been my favorite lately.
Robbie: Western for sure.

The brothers started a private label jerky company called R-Jerky to help support their racing. They have numerous flavors to choose from including Sizzilin’ Hot, the popular 7 Deuce Deuce Black Pepper Beef Brisket, Teriyaki, and more. Visit EatRJerky.com to support the Wageman's racing efforts. You can use promo code Motoxpod21 to save.