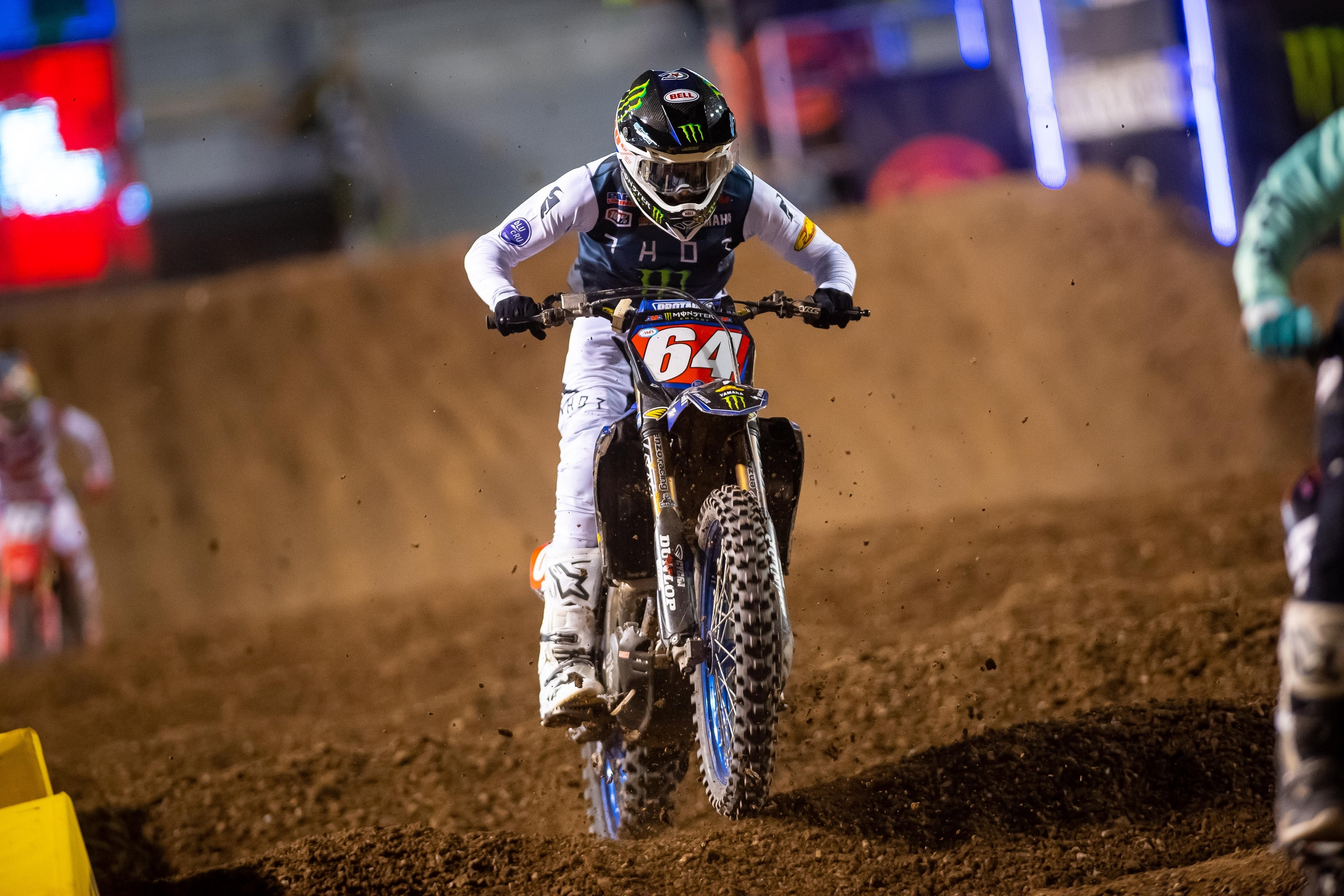 Two thousand twenty-one AMA 250SX East Region Supercross Champion Colt Nichols speaking to just how he collected the biggest accolade of his racing career last May in Salt Lake City, Utah: “It definitely wasn’t the path that I thought I was going to do, but it was the path that was meant for me.” Yes, after a five-year walkabout which saw the Muskogee, Oklahoma native leave the amateur ranks without any sort of factory-supported ride and then spend time in various basketball and hockey arenas around the world over racing arenacross, in 2021 it all came right for the Monster Energy/Star Yamaha Racing rider when he scored three main event victories and wound up on the podium at every 250SX East Region round. That championship was great, but Nichols still wants more, as his Lucas Oil AMA Pro Motocross Championship campaign in the 250 class wasn’t what he had hoped, and he feels like he has more room to grow as a racer. As a result, he’s switched to a new trainer in David Vuillemin, and he, along with the rest of his team, is also now based in Florida instead of California.

Right now, it’s all systems go for Nichols and his YZ250F as they bash out the laps and keep the stopwatches a turning way down in hot and humid Tallahassee, Florida, in a determined and concerted effort to keep that shiny red number plate affixed to his Deep Purplish Blue – Paint Code 564 race bike.

Racer X: Okay Colt, totally appreciate you taking time out of your week to talk with us. First and foremost, where are you at right now? Are you in California or holding station somewhere back east?
Colt Nichols: Yeah, we’re back east. I’m in Florida right now. We moved here right before October and have been here ever since. We’re trying to prepare and, yeah, get ready for the new season.

How do you like riding, testing, and training down in Florida?
Honestly, I love it. Yeah, I was a little bit weary about coming here just because I just haven’t spent any time before in Tallahassee here at Ricky Carmichael’s old place. So yeah, I moved down here, and I bought a house and I’m still kind setting things up. As far as the area here and the facility and everything, it’s just incredible. I love it. It has been really cool. We had a good Thanksgiving here. I wish I could have made it home. We just relaxed and I actually had a few days off to kind of recover from the past few weeks of riding. It was good, though, man.

Here's a question I wanted to ask you: How does it feel to be a champion? You went into the off-season as a champion and I know you had some time to think about some things.
Yeah, it’s a different kind of thing. It made it seem a little different for me just because I changed a lot of things in my program this year because I want that feeling so bad again. I changed a lot of things up and I’m doing things that I feel are going to help me get to that next level even again. It has all felt really good. I just had this insane feeling of making sure I wasn’t being complacent with anything. I just want to keep striving and trying to get better as a rider and as a racer. As an athlete, I wanted to try and build my fitness up a little better. Honestly, it’s a really cool feeling because you have that sense of accomplishment, but it is also it is one of the craziest motivating feelings as well because you want to try and back it up and do it again. It’s been really cool. There is definitely a level of confidence and accomplishment that is there with me now, but the overall and overwhelming feeling of wanting to do it again has been pretty huge for me this off-season.

And as they say, nothing worth having comes easy. You worked long and hard all along the way this whole thing come together, didn’t you?
Yeah, it definitely was a battle, for sure. You know, and just like anybody else, we all have our own sack of rocks to carry, and we have things that we think are a little more extreme than the other person. We all have our ups-and-downs and our trails and tribulations to get to where we want to go. For me, and for a long time, I was almost kind of bitter about the journey I had to take just because it wasn’t what I wanted at first. You know I didn’t come out of the amateurs with a factory ride. I kind of had to finesse my way around and figure out how to get to that point. Like I said, that definitely wasn’t the path to a championship that I thought it was going to be, but it was the one that was meant to be for me. It happened the way it was supposed to. I was able to mature and understand the process and what I was doing and how important it was. I wasn’t taking any of that stuff for granted. I wouldn’t change anything. It was definitely stressful at times, but overall, it the path that was meant for me.

You got there and you won that championship and you’ll always be remembered for that. People don’t forget champions.
Yeah, the name is in the record book, so that’s a pretty cool feeling. Even for my family and for the people who have sacrificed the most, to be able to say, “Hey, this is what this championship is for!” Our name is there and it’s never going anywhere. That’s a pretty cool feeling. Yeah, and lie I said, I just want to go do it again and try to be better and try to figure out a way to win this thing again.

When you take a look back over your shoulder at both the 2021 250SX East Region Supercross season, as well as the 2021 Lucas Oil Pro Motocross Championship, what do you think? What’s your take on your overall body of work from those two title chase efforts?
Twenty twenty-one was definitely great steps in the right direction for the supercross portion of the year. We had a really great indoor portion of the year, but then when we came to outdoor series, I definitely struggled more than I wanted to and was kind of left leaving a few of the races with my hands in the air and kind of just dumbfounded. It was almost like, “I don’t know what I’m doing…” It was kind of frustrating towards the end of the summer for sure. I felt like I never could really get on my feet. That’s why I’m going to do some things a little different this year and during this off-season and I’m hoping that helps in 2022. Overall, and in general, I just want to try and be a better rider and try and improve and hopefully I can try and make another title run when that time comes.

As far as the approaching 2022 supercross season goes, do you have a preference between competing in the 250SX East or West regions?
Not necessarily. You know, obviously, I won the East Region, but I don’t really care. I’ve had a lot of good years racing West Coast and I’ve had some good years racing East Coast too. I don’t necessarily have a preference. I’m excited for either or.

Yes, beginning with the season opening round at Angel Stadium on January 8, 2022, isn’t it going to be fantastic to see stadiums full of racing fans again?
Oh, I’m very excited, man. There is nothing like having supercross with the stadiums full. Personally, I thrive off of that pretty hard, so I’m very much looking forward to having the fans back and having everything packed in and getting that excitement and the energy going before the races. Yeah, it’s going to be really cool being back at Anaheim as well as all the other normal venues.

What have you been working on during this off-season? I know you don’t want to divulge too much, but in general, what have you chipping away at regarding yourself and your racing for 2022?
Mainly and honestly, I’ve just been trying to improve. There are so many areas where I felt like I could have been a little better last year. I did a lot of things really well, but there are obviously always things that you can do better both as s a rider and as a racer. I knew what those areas were, but once the season gets going, you’re kind of stuck. You don’t really have that time to try and improve and do things you really want to do. For me, I knew what those areas were so when the off-season came I said, “Hey, these are areas where I struggle and where I want to be a little better.” I have a new trainer this year [working with David Vuillemin] and I have a new mechanic and we moved to Florida. There are just a lot of things that are different about my program this year as opposed to last year. Overall, man, we are just trying to be better and trying to sharpen our tools as much as we can before it’s time to go race.

And this Monster Energy/Star Yamaha racing organization and effort has become so prolific and defined and comprehensive, hasn’t it? I mean talk about an effort and organization that is absolutely all-in with racing in 2022 and beyond…
Yeah, we are pretty wide open and the team is still kind of getting everything going. Even here at the facility at the Goat Farm here in Florida, they’re still working on getting the building built. Everything has been a little slow in just getting materials to build buildings, but it is coming together really nicely. Even now, our big race shop looks incredible, and it has been cool to test and being able to do all of that right on site instead of having to go back to the workshop and tear a fork down and then have to come back the next day. There have been some huge advantages about being in Florida and I’ve kind of fallen in love with the place. It’s just been really cool. We’ve got a good group of guys from the 450 side all the way to the amateur side. There are a lot of us and I know all of the guys work really hard and that’s just a big shout-out to the team because they keep us all moving and it works. A huge shout-out to those guys. They’ve got it going on.

What do you want to achieve in 2022? I know you think you can excel and win, but way down deep, what do you think you can pull off and achieve this coming racing season?
Mainly and honestly, my biggest goal for 2022 is strictly just winning. I want to win and to try and really show my full potential and not feel like I have to question any part of my program or anything at all. I want to go win and I also want to enjoy the process. Really, and like I said, last year was a very lackluster summer for me, so I want to come out swinging in the outdoors and try to be a contender indoors and outdoors and end my time in the 250cc class with a bang, really.