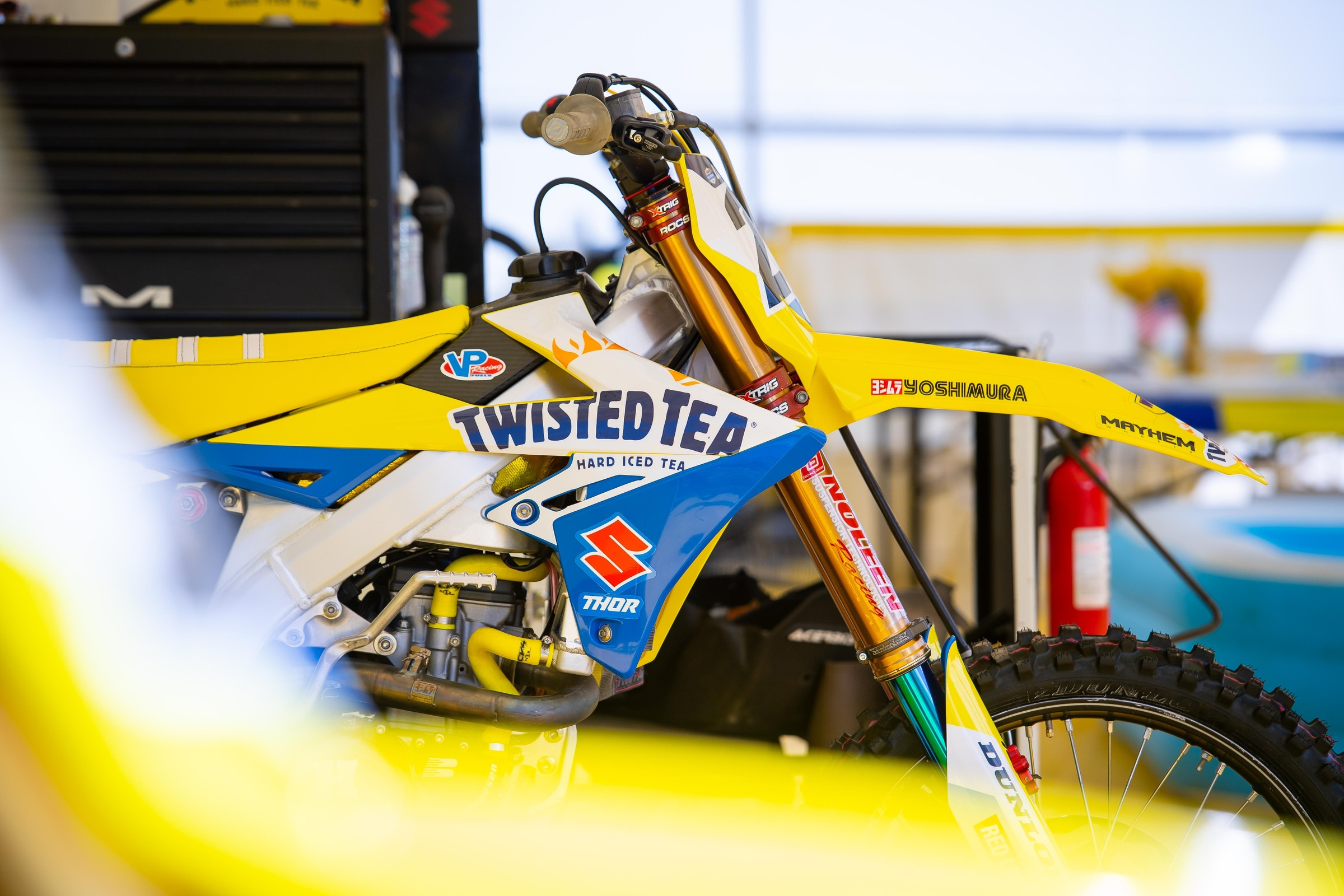 Phil Nicoletti is here to answer your questions! You just have to send him questions. This week they cover three age old questions in this sport: how do you ride when it's cold in the winter, how do you learn supercross whoops, and why doesn't Suzuki offer electric start on the RM-Z models?

Got something else to ask? phil@racerxonline.com and we'll get you sorted.

Phil!
A few weeks ago you mentioned riding for the first time back in the day when the winter would thaw out in New York. Can you give me some of your “hot setups” (literally) from trying to ride in the cold back home? Milk jug handguards? How many layers of gloves, sweatshirts, etc? Or did you just wear regular gear and tough it out?
Joey

JoeyJoeyJoey,
Only thing I realllllllllyyyyyy wish I had back then was an FXR sponsorship! I really could have used their badass winter riding and snow apparel! That’s no bullshit. Back then I had to make it work with some homemade setups. I alway used my moto boots and knee braces, then I would throw on snow pants, winter jacket, and winter gloves. I hate hand guards now, and I hated them then. So no milk jugs or anything else. I used to ride the shit out of the snowmobile trails. I would take an extra gallon of premix in a backpack and cruise all over the place. The company Trelleborg made great studded tires. They always worked great. I was always able to get two seasons out of them on my 80’s and 125’s. I used to strap up a flash light and rip at night as well. There weren’t many options for me. That was the only way I could ride my dirtbike, so that’s what I did!

Hey Phil,
Can you explain why Suzuki doesn’t add an electric start?  I’m sure I could google it, but I wanted to see if you have any inside knowledge. Or, why is it taking them so long to add? There can’t be that much R&D involved as the other bikes have them, and it seems pretty simple. You would think Suzuki would want to do anything possible to stay completive. It also has an advantage to the riders on them, although few pros are on those bikes. I’m sure tipping over 20 minutes into a moto and kick starting could cost a position or two with either time or energy wasted. What gives?
Average mid 30s MN rider/Martin fan

Average mid 30s MN rider/Martin fan,
AHHHHH MAN, you had to go there huh?! I don’t even think Google could tell you this answer! I think some of the people at Suzuki would love to have electric start put on the bikes so they can stop hearing people complain about it. But to be fair, the Kawasaki 250F took some time to get electric start as well. Suzuki always use to have an awesome platform. They were dominant as hell not to long ago! I don't know why it didn't really seem to get noticed, but they had better championship runs than Factory Honda. Like Carmichael, Reed, Dungey, and Roczen.

I just don’t really know what happened. It’s not like Suzuki had a lack of support in MotoGP. Or maybe MotoGP has a better ROI than moto development? I’m not really sure, but I don’t think the electric starter would be a deal breaker to add on. Obviously costs a little more to do and it adds some more weight to the bike. But I’d rather have the extra weight that kick start my dirt bike!

I really want to give you an answer so I hit up Chris Wheeler at Suzuki and here's what he had to say. Yes, this is his real answer:

Suzuki could easily do it but ultimately it’s a business decision and at this time Suzuki has focus on other areas. MotoGP seems like one of them. I know they had a non off-road (for motocross) e-start engine in the works that I was told about in a casual conversation with some engineers years back. We were actually pushing for it on the R&D side as far back as 2011-12. I would initiate every phase one test session by hitting the kill button and looking at the group until someone acknowledged what I was getting at. However, I bet if you ask dealers, they’d say it would be nice to have but they’d want other things first that would make them more profits.

Or maybe, Phil, if you wouldn’t have blown it when Suzuki bet big on you, the race department would look completely different today and my 7 year old wouldn’t have to watch me cry myself to sleep each night.

Phil,
We know whoops are like the last part a new supercross rider can usually get dialed in. Can you explain the technique you have to learn, basically getting your front wheel on top of each? How hard was it for you and do you have stories trying to learn this back in the day. I'm assuming you did eventually figure it out!
Non Millville Whoop Monster,

NMWM,
SX whoops are a balance between technique and bike set up. Supercross whoops require very stiff suspension. The forks need to be stiff at the initial part of the stroke so when the front tire hits that first whoop, it doesn’t compress. If the forks are too soft, they compress and all of the weight shifts forward. Not only is that scary for the rider, it also kills all forward drive. In a set of supercross whoops, the idea is to hit every single one with the front and the rear tire and keep the bike as level as possible. If the shock is way too soft it makes the situation that much worse. The shock gets buried in the stroke and sooner or later ends up being a pogo stick for the rider. The energy of the shock has to go somewhere eventually and that way is UP! But the the good guys can hit whoops on bone stock suspension. Yes, bone freaking stock! This fact kills me. Chad Reed, Justin Brayton, Ken Roczen, and Malcolm Stewart can all hit a set of decent size whoops on stock shit. Yes, I know it might not be Mach 1 speed, but they have the proper concept and technique to get across a set safely. It comes down to where to place the front and rear wheel, how to load the suspension, how to finesse the throttle, how to let the bike dance with a certain amount of weight on the pegs, when and how to slip the clutch, etc etc. Starting off for the young guns, technique is your best bet. Start small, and work your way up. Not one shoe fits all. Don’t feel rushed and give a big FU to the guy that tells you to get on top and just pin it. Because that doesn’t work, trust me!

Check out this gif below of Malcolm Stewart hitting the whoops at the 2020 Salt Lake City 2 Supercross in his heat race! 🤯