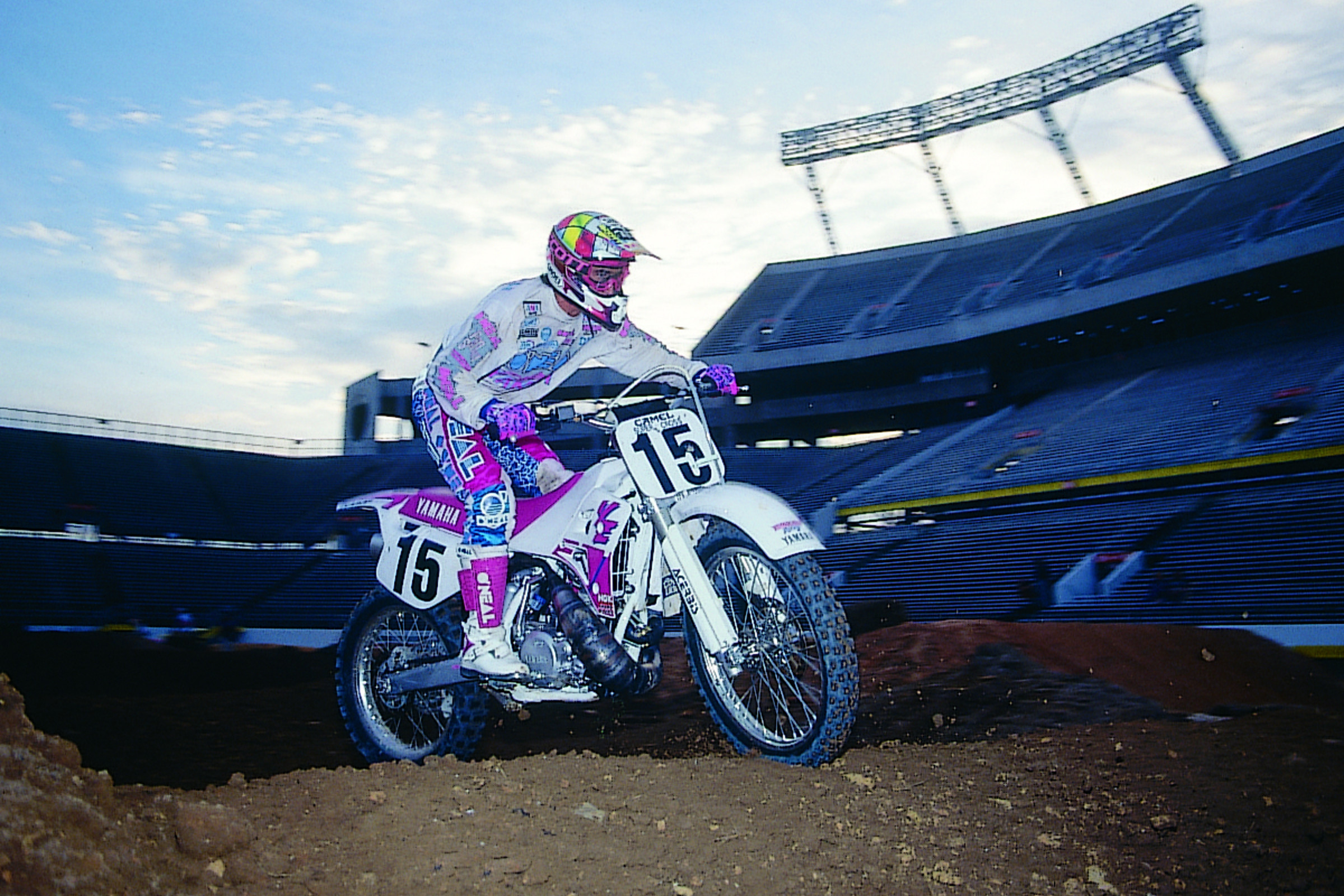 In September the Red Bull KTM team announced Marvin Musquin would return for the 2022 season, marking his 14th year of service on the orange machines, dating back to his early MX2 Championship runs on the Grand Prix circuit.

“It’s no secret that everyone on the team is like family to me,” said the 31-year-old Musquin. “It will be another fun challenge working with the new bike, which will be a lot more work but that’s exciting! I look forward to focusing my efforts on the supercross series and to the supercross schedule being back to normal starting back at Anaheim in January!"

“Marvin will be back for another SX season and I think he wants to prove to us that he is like red wine and gets better with time,” said KTM’s Motorsports North America Director Roger De Coster.

While 14 years with a brand is a long time, longer than the entire career for some riders, we wanted to see if anyone else can compare, historically. Here’s Davey Coombs’ deep dive into long tenures. Be sure to leave your comments below.

Robbie Reynard, Kevin Windham, Ricky Carmichael, and James Stewart were all riders signed at young ages to Kawasaki Team Green amateur support deals, in the hopes that they would transition right into the brand's professional team (which became two teams in 1993 when Mitch Payton's Pro Circuit team switched from Honda to Kawasaki). But of all those riders, only Carmichael would ever actually spend time with the Pro Circuit as a 125 rider, as Reynard went straight to the factory rig in '93, Windham actually switched to Yamaha for his first pro contract, and Stewart went straight to the main Kawasaki truck. Stewart, who first joined Team Green in 1993, would last longest on green, riding Kawasakis for 15 years through the end of the 2008 season, when he left after going 24-0 on a KX450F in the AMA National Motocross Championship.

The next time Kawasaki got their hands on a rider they felt was of the level of a Stewart or Carmichael, they held on tight. As a result, Ryan Villopoto, who was picked up by Team Green in 2003, spent his entire professional career on Kawasaki (2005 to 2015, counting that last little bit in Europe). That's 13 years.

Believe it or not, neither Stewart nor Villopoto were on Kawasaki the longest (factoring in amateur years). That distinction goes to Adam Cianciarulo, who first showed up in the Loretta Lynn results on a Kawasaki KX65 in 2004, and is still with the program, having gone through to the Monster Energy/Pro Circuit Kawasaki team, and now the Monster Energy Kawasaki 450 team. The start of the 2022 season will be the start of his 19th with Kawasaki's support.

But if we're only talking time on the factory team, as a professional, no rider was with the Kawasaki factory team longer than Jeff Ward. From February 1979 through his last race through October 1992—14 years—Ward was Kawasaki's go-to guy. However, Ward didn't spend his entire career on green. Few remember that he started out in 1978 as a rookie on an FMF-backed Suzuki RM125. His best finish on yellow? Fourth at the '78 Omaha, Nebraska 125 National. After that, Wardy was all green, all the time. His 14 years as a professional factory rider on one team in AMA racing is the longest-such tenure.

Kevin Windham's professional career almost ended in February 2002 when he crashed during practice at the Atlanta Supercross and broke his femur. He sat out more than a year before finally returning in May 2003 aboard a Factory Connection-supported Honda CRF450. K-Dub had been on a Honda before, riding for the factory team in 1999-2000. Now he was back on red, and he would never ride anything but a Honda again for the rest of his career. Windham raced professional through January 2013, and that decade-plus as a Honda rider marks the most ever for a Honda rider at the top level of SX/MX.

Over in Europe, Roger De Coster started making a name for himself on a CZ in the late 1960s, winning his first 500cc Grand Prix in 1968 in Italy aboard the Czech brand. But he become a dominant powerhouse starting in 1971 when he was signed by Suzuki to lead their new 500cc team. "The Man" would win five world titles in the next six years, and lead Suzuki through 1979, nine years, before finally signing with Honda in 1980 for the final year of his career. De Coster would return to Suzuki in the late 1990s as team manager on the AMA circuit, and stay there through 2010, when he switched to KTM, where he now oversees Husqvarna and GasGas on the AMA circuit as well.

Broc Glover's time with Yamaha began in 1977, his second year as a professional, and would last through the summer of 1988—an even dozen years. Along the way they won six AMA Pro Motocross Championships together, second only to Ricky Carmichael's ten, but the most by one rider on a single brand. Glover won the 1981 Trans-USA title as well. He recently told us that he wanted to be "the loyal guy, kind of like Tony Gwynn who stayed with the San Diego Padres for 20 years." But at the time Yamaha did not have a great reputation for keeping top talent happy. In the early 1980s the brand dealt away three of Glover's teammates, all three future AMA Motorcycle Hall of Famers: Bob Hannah, Ron Lechien, and Rick Johnson. By 1988 both Yamaha and Glover felt it was time for a change, despite the fact that together they won the season-ending Los Angeles Supercross at the LA Coliseum. It would mark Glover's last AMA race ever, as well as his last on a Yamaha, and he went out a winner.

Over in Europe the Czech legend Jarsolav Falta was always associated with the Czech brand CZ, which made sense—Czechoslovakia was a communist country at the time and rarely traded with the west, which meant he could not really ride any western European bikes like Husqvarna, Maico or Bultaco, let along the Japanese brands. Falta first showed up in the FIM 250cc World Championships in 1971, when he finished ninth overall. He very nearly won the title in 1974, only to have it basically stolen away by politics and team tactics against the Gennady Moiseev-led Soviet riders (who got to ride KTMs, unlike Falta). Falta also won the 1974 Superbowl of Motocross at the Los Angeles Coliseum, making him the one and only winner in SX history aboard a CZ. Over the years he raced a bunch of funky CZs, which seemed to got progressively weirder as the Eastern Bloc countries financially fell behind in the Cold War and didn't want to waste much money developing dirt bikes. His last entries on the Grand Prix tour came in 1982, a full 12 years on CZ motorcycles. (Here's a gallery of Falta's career and bikes over the years)

And speaking of KTM, Musquin is not the only well-tenured rider in the waning stages of his professional career. Tony Cairoli, the 9-time FIM World Champion, first joined KTM in 2010, after beginning his professional years with Yamaha. He was the reigning MX1 World Champion in '10 when he switched from blue to orange, and he has remained there ever since. He won his 94th MXGP just last week, and his first Team Italy won the Monster Energy FIM Motocross of Nations for the first time since 2002. He will go part-time racing in 2022, but he will still be with KTM—it will mark his 13th season in orange. Musquin moved to the brand in 2009, so he has Cairoli edged by a year.

And then there's Jeffrey Herlings, who's time with KTM actually is even longer than either Musquin and Cairoli, both of whom are older than the Dutchman. Herlings raced KTM 85cc minicycles as kid, and then turned pro aboard one and entered his first professional race as soon as he turned 15, the 2009 FIM Motocross of Nations in Brescia, Italy. Since then he has won every one of his 97 GP wins and four world titles aboard KTM, though unlike Marvin and Tony, Jeffrey has no plans of quitting anytime soon.

Doug Dubach first got on a Yamaha in 1985, and showed up on them every year throughout the rest of his entire professional AMA career, which ended in 2001. Along the way Dubach was a Yamaha factory rider, he won the '92 San Jose SX, and then he transitioned into a test rider and started his own hop-up company, Dubach Racing. He also spent some time in Canada racing and winning titles north of the border. "Dr. D" had an impressive 17-straight years exclusively with Yamaha on the AMA circuit alone! (Dubach is the main image at the very top of this post.)

But there is a discrepancy in the record: The Vault lists Dubach as being on a Honda during SX in 1994, and on a Yamaha outdoors.

"I was riding for White Brothers at that point and it's possible that they originally signed me up on a Honda, but who knows?" said the Doctor. (We will correct the record for Dubach here soon.) Dubach also mentioned that he only spent one year racing in Canada, in 2000, and won the title. He did not return to defend it in 2001.

Finally, there's the curious case of Barry Carsten, Bayville, New Jersey's finest. After growing up primarily on Yamaha YZs, Carsten switched to a Suzuki RM125 in 1989, his fourth year as a professional. He continued to race professionally through 2008, on a Suzuki every time he entered, which was dozens and dozens of times each year in both AMA Supercross and Pro Motocross. And after Carsten ended his time as a pro, he kept racing other events around the country and eventually returned to Loretta Lynn's Ranch in the vet classes, starting in 2013, always aboard Suzuki RMZ motorcycles. As a rider, his relationship with Suzuki, at both the pro and amateur levels, stretches a remarkable 33 consecutive years!

"Me and Barry Carsten used to always talk about who had a top 100 number the longest," added Dubach. "Back before the permanent system, back when it was based entirely on points," says Dubach. His first earned number was 53 in 1986, one year after turning pro. His last was 2001, when he was #60. As for Carsten, we see his first number in 1988, #65, his last in 2007, #92. For both Dubach and Carsten, that's a long time for being fast for sure. And no one was faster for longer on a Yamaha than Doug Dubach, just as no one was faster, for longer, on a Suzuki than Barry Carsten.

Let's finish with the riders who rode the most brands over the years, beginning with '70s NorCal hero Danny Turner of Placerville. In a professional career that lasted from 1974 to '82, he entered AMA SX/MX races on a record eight different brands. In order, and for varying lengths of time—one single race on a KTM, compared to several years on Yamaha, for example—Danny Turner rode Husqvarna, Honda, Bultaco, Yamaha, Suzuki, KTM, Kawasaki, and Maico. And then there was Woodside, California's Jim Turner, a true journeyman who raced in Europe, Canada and all over the U.S. For more than a decade he popped up at AMA races, and he entered a total of seven different brands: CZ, Montesa, Bultaco, Yamaha, Suzuki, Husqvarna, and finally Honda.