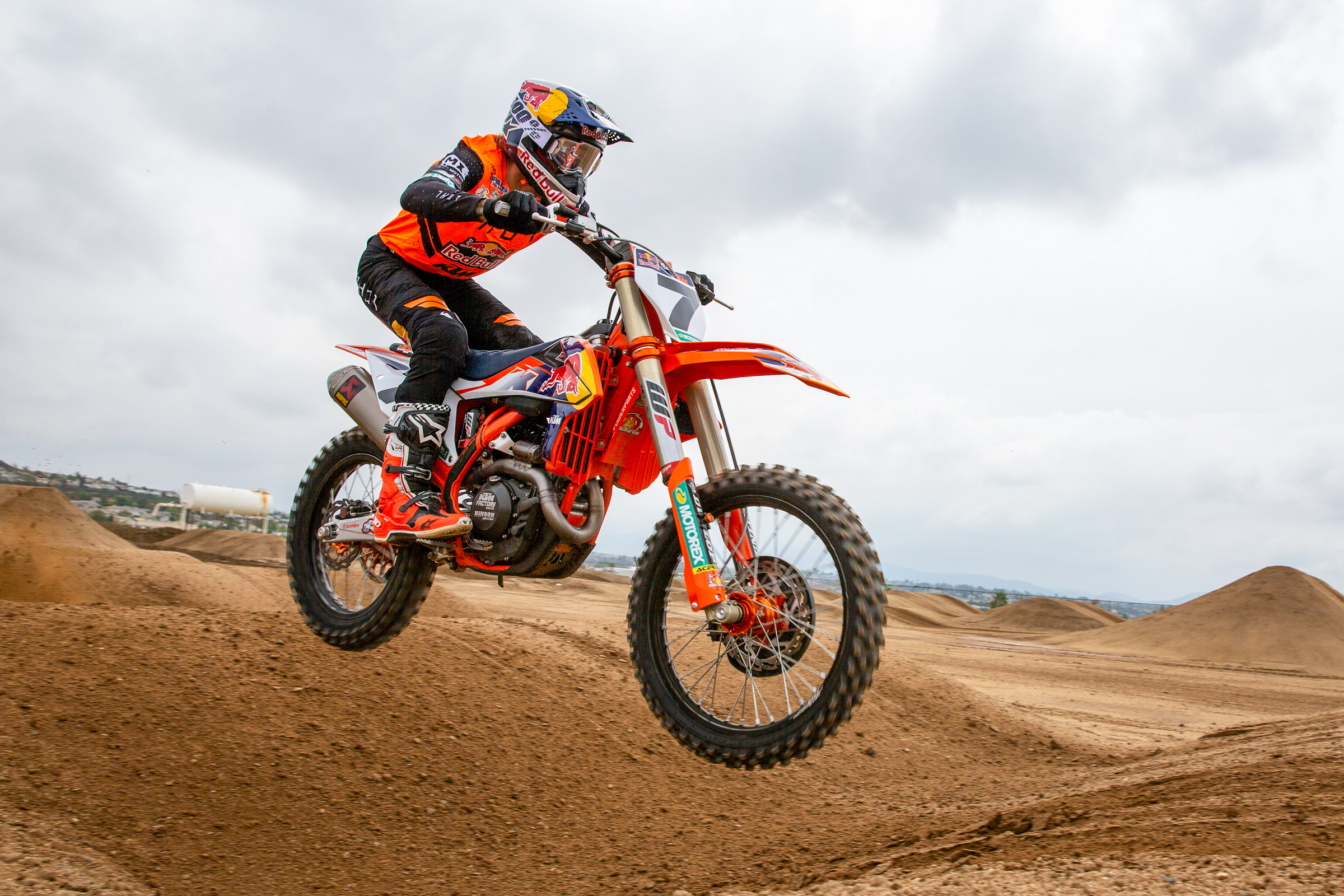 Kris Keefer: I think out of all the shake ups in 2022, this one has the most potential to get results ASAP. What's weird is that I heard Plessinger wasn't going to go to KTM as Yamaha matched KTM's offer, but Plessinger liked the bike so much that he really wanted to be with KTM. As a guy who hops back and forth from a KTM and Yamaha a lot, I will say that the KTM is a lot easier to ride aggressive/fast than the Yamaha. Yes, I know Dylan Ferrandis is your Pro Motocross champ and he is gnarly aggressive, but name someone on the gate that rides like Ferrandis? NO ONE! He's a UNICORN! I think Plessinger's style invites a smoother roll-on power delivery and that KTM chassis really shines when there is an aggressive rider on top of it. Plessinger is not the smoothest rider in the series, and he moves around a lot on the bike, so to me it's easy to see why he chose the KTM. That and the fact that the KTM platform has produced a ton of 450 championships the past ten years or so in AMA Supercross has to help right? Contrary to what most people think, the Yamaha is NOT a tall rider kind of machine as its rider triangle is very compact. Even when you move the pegs, bars, as well as seat height around, there are still complaints about the feel of the bike from some top riders. Let's face it even if it's a sideways move for Plessinger, if he thinks he's better on orange, then the good ol' placebo effect will kick in and boost his confidence. With the resources that KTM has and the fact that Plessinger is probably the hungriest of all the riders on the team, I think he wins a few races and shows what we all thought he could do a couple years ago.

Jason Thomas: This move seemed to be in doubt for months. With both Red Bull KTM and Monster Energy/Star Yamaha Racing both vying for AP7's services, rumors swirled about who would win out. In the end, I believe Plessinger ended up where his heart was. It's difficult to look at the success of Red Bull KTM in supercross and argue against it. Coupled with the success of Aldon Baker's program and the watchful eye of Roger De Coster, anyone wanting to take the next step has to take the proposition seriously. The tough part here was that he genuinely seemed happy at Monster Star Yamaha. He has been improving steadily in recent seasons after struggling in his rookie season. Part of him surely wanted to see that through. I think he's making the right move here, though. That KTM 450 has proven powerful in the tight confines of supercross. Watching Cooper Webb turn under even the tightest of ruts was simply remarkable. It just seems capable of maneuvering more deftly than other comparable 450s. There's a lot to be said for wielding the sharpest sword when entering the arena. I believe the Red Bull KTM to be that weapon and likely why Plessinger decided on the switch.

Steve Matthes: AP's emergence this year on the Star team and on the same bike was one of the coolest stories this year. I think it was so cool that Yamaha was trying to keep him from leaving! The magic potion of Bobby Regan and that team woke AP up after those years on the factory squad. Red Bull KTM is reuniting Aaron with Cooper Webb, but Webb will train/ride at the 83 Compound while AP will be with Malcolm Stewart (newly to the Rockstar Energy Husqvarna squad) at the Baker's Factory. I hope that grind doesn't wear out Aaron physically or mentally because he's one of the best personalities in the sport. The change from the Yamaha to the KTM will be a big one for sure and Aaron's not the best test rider out there (he's admitted that) so he'll need to lean on the team to get him something that works right away. Because of the recent improvements Star has made, and how happy AP seemed to be over there, I think the jury is out on this move. I'll be watching.

Kris Keefer: Will the Rockstar Energy Husqvarna FC 450 bring out Mookie Fever, heat race Mookie or maybe, just maybe, main event winner Mookie? Perhaps, but I will say this... You will not see another steel frame motorcycle go as fast in the whoops as you will when Malcolm goes through them on his new ride in ‘22. All of the bitching about the steel framed bikes not being "good" in the whoops will get squashed come January. What is cool is to see Malcolm get a two-year deal and he will be racing outdoors, which I think he will be better than most people will give him credit for. Lil Stew is not just a SX only guy as he can ride outdoors pretty damn good too! When it comes time for A1 in January, I don't think this move to Husqvarna will reveal its true potential until we get back east. I feel with the engine character and the lightweight feel of the Husqvarna coupled with the man meat of Mookie will be a combo that will see podiums. As always this is all pending if he's healthy, but this move is a good one and the fact he will be under the tutelage of Aldon Baker makes me even more sure of all of this. It wouldn't surprise me to see Malcolm show up at the A1 press conference with a chiseled jawline and abs just like we have seen from so many past athletes of Aldon's. It will take good starts from Malcolm to be in the mix in ‘22, but the KTM's and Husqvarna's have been known to get the power to the ground out of the hole so we could be in for a fever. Not a COVID-19 fever, some MOOKIE-22 fever! Too hot in the hot tub! Gonna make me sweat!

Jason Thomas: I think this move is not that notable on a machine level. The Monster Energy/Star Yamaha Racing team took huge strides forward in 2021 as seen with Plessinger and Ferrandis. The Rockstar Husky is also a more-than-capable steed, too, winning both indoor and outdoor titles in recent years (JA21 and ZO16). The opportunity was much more important in this scenario, guaranteeing Mookie a two-year deal. He hasn't had this type of job security on a 450 even though it's long deserved.

The much more interesting aspect to me will be the switch to Aldon Baker's program. The routine won't be a surprise to Mookie, remember his brother James was on this program during his prime. Actually doing the work and adhering to this level of discipline will be a change, though. It's not a stretch to say that Baker runs the tightest ship in the sport. Whether or not the program works for an individual is up for debate, but the results are hard to argue against. The program has spit out title after title since the year 2000. With Mookie's undeniable talent, could this be the missing ingredient? Will Mookie have the mental fortitude to hunker down during the hardest days? Those are questions we will get answers to in a few short months. My official opinion is that Mookie would be a very dangerous man if he follows the program to a tee. Not many riders have the ability to ride at Mookie's sprint pace. Maintaining that pace has always eluded the #27, though. Turning top ten's into top five's and top five's into podiums is what I will be watching for. As Keefer mentioned, let's see what Mookie's physique looks like come early January. That is often a great indicator of what's under the hood.

Steve Matthes: This one kind of came out of nowhere for me, Mookie's been a SX-only guy for a long time and he's also been jumping from team to team unable to find a permanent home. So for the Rockstar Husky guys to sign him for SX for 2022, okay I kind of get that. But a two-year deal for SX AND MX? That's surprising. Oh and to top it all off, he's going to train with Aldon Baker despite the Stew compound being just an hour away? Like the Dos Equis man, Malcolm Stewart might just be the most interesting man in motocross in 2022. I think there's a potential that this could work out awesome, we've seen what Baker can do and we know Mookie has raw talent. There are people on his team last year that told me he wasn't in the shape he needed to be in and it showed. So, if he can get a bit better in that area, with some structure in his program—we could really have something here. Mookie Fever may take over the pits!