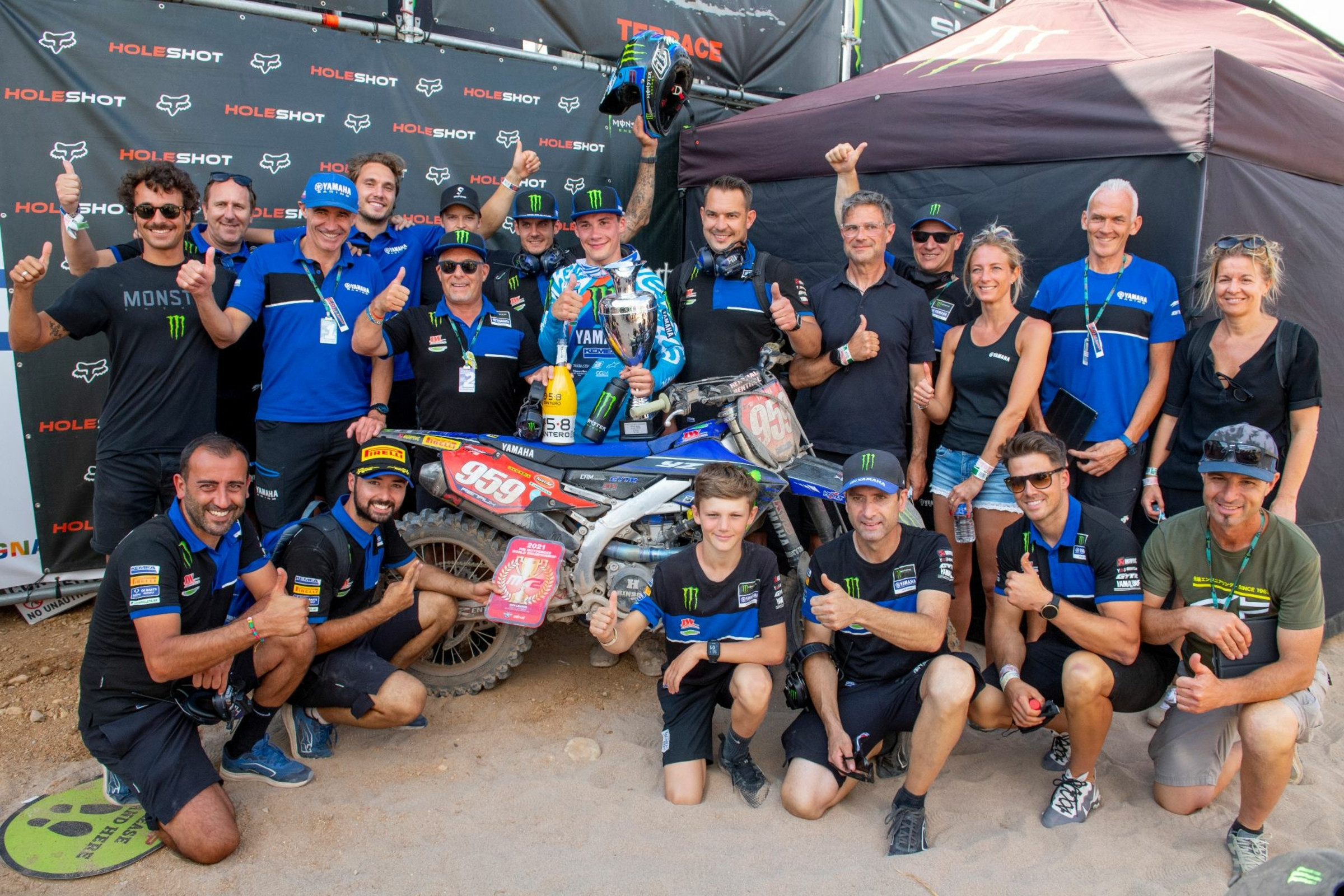 From the Yamaha press release dated September 29, 2021 and reading: Yamaha Head to Germany!

“I’m looking forward to this weekend. I like the track; a lot of ruts are always coming and they prepare the track really nice. The goal is to stay consistent and get on the podium and score some good points. Let’s see from there.”

This was Monster Energy Yamaha Factory MX2 team racer Maxime Renaux of France speaking in print, the 21-year-old now holding a commanding 71-point lead in the global war to capture the 2021 FIM MX2 World Championship. Now poised to launch a run of eight straight Grands Prix beginning with this Sunday’s MXGP of Germany set for the legendary and storied Teutschenthal, Renaux is hoping and planning on marching forward with the same speed, consistency and results that have all added up to make him the standout pilot in the MX2  global conflict. Dating back to the birth of the FIM Motocross World Championship in 1957, the great motocross nation of France has won a grand total of sixteen FIM MX MMX1/MXGP/250cc and MX2 and 125cc World Championships. Will Maxime Renaux be the next Frenchman to snag an FIM Gold Medal? To find out more about the No. 959 Yamaha YZ250F rider and his title charge, we sought him out, and Renaux spoke about being a man of the world.

Maxime, thanks for taking the time to talk with us as we know you have a big weekend of racing before you. The MXGP of Germany is set to run on hardpacked Teutschenthal circuit beginning tomorrow. What do you make of the place?
Yeah, it’s been pretty good track for me. It’s a really nice track and it is always prepared real well and has deep ruts. Yeah, it has a nice layout and flow, so, yeah, I am really looking forward to it. I’m going to try and gain some good points for the championship and to extend my lead a little bit and to make some more steps towards the championship.

Your results thus far in 2021 have been amazingly consistent. You were sixth at the season opening MXGP of Russia at the Orlyonok circuit and you placed fourth at the MXGP of The Netherlands at the Oss circuit. In the other six Grands Prix you lined up for you were either first, second or third overall. We can see why you have a 71-point lead in the fight for the MX2 World Championship.
Yeah, it has been really good and actually that is why I am really happy about my season. I’m being pretty consistent now and always work my way to the front if I don’t start good or something. Except for the first race in Russia where I had a little bit of trouble with some sickness that I had to fight my way through, it has all gone well. I’ve only missed out on the podium two times. I’m really happy about it. Now we try to make some improvements over the past two weeks with my starts, so I’m getting better at that and looking to improve on this very topic this weekend.

Beginning with Germany on Sunday, you guys still have eight Grands Prix left to run. There is still a hell of a lot of racing still left to go this season, isn’t there?
Yeah, exactly. Actually, we had the Motocross des Nations last weekend. I didn’t ride it because I wanted to take that week of rest and I also didn’t want to take any risks to get injured or something because my main goal is to be World Champion. So yeah, we’ve had a chance to recover and that is good because now we are heading to eight GPs in a row and those eight GPs are going to be over six weeks because we are going to have some doubleheaders. It’s going to be pretty intense so I just wanted to rest and prepare for the rest of the GPs as good as possible. Yeah, I’m really looking forward to all of it. We still have a lot of racing to go and I’m just going to try and take it as I took the first part of the season. I always want to be consistent and fighting for the good points. I’m not trying to win every race, but trying to be intelligent and winning when I can and also being able to do second and third and fourth. It’s part of the game.

Your career trajectory in the MX2 World Championship has been steady and remarkable. You were a solid seventh in your rookie season, followed by a very calculated third in 2020. Now, you’re out front and leading the 2021 World Championship. Very impressive for a third year racer.
Yeah, exactly and I’ll explain a little bit more about my story to you. I’ve been through some tough years. It all started in 2015. Actually, I was initially riding the European 125 Championship and then in the Junior World Championship I won the 125cc title in 2015. That (2015) season was one of the best years that I had as a young guy and after that I had some big injuries in 2016 and 2017. In 2017 I had big pause in my career because I had to stop for a full year because I had a crash with a rider that jumped on me and I suffered some stretched nerves and my left arm was completely paralyzed and I couldn’t move it and I couldn’t react on anything with it. It was a tough year and I really had to fight to make it back. Then 2018 was just a struggle in trying to get back to racing. After a year of not racing, I had to go back and find that momentum that I had with racing. It was a tough year and it was also tough with my arm because it still wasn’t 100-percent. In 2019, my first full season, I was seventh in the World Championship. In 2020 I was third in the World Championship. Now it is 2021 and I am fighting for the World Championship. Yeah, it has been like you said, it has been consistent improvement and I am really looking to keep on going and seeing the bigger picture and improving every year.

And you’re contracted to the Yamaha Motor Europe-backed Monster Energy Yamaha Factory MX2 team all the way through the 2022 season, correct?
Yeah, exactly. Exactly. I actually have a contract for two years plus an option, so yeah, that’s it.

How do you like being a member of the Monster Energy Yamaha Factory MX2 team? Between team principal Hans Covers and team manager Marnicq Bervoets, once a great 250cc Grand Prix racer, it appears to be a very strong organization.
Yeah, yeah, actually it is really good. It’s my first year as a factory rider and I can see some differences and improvements compared to some of the other supported teams I’ve raced for. We have a lot of great things going on in the team and everyone knows what to do and they have a great way of doing things. The riders just have to focus on the riding and I think that is how it should be for everyone, you know? You just have to jump on the bike and do your job. It is really enjoyable and it is also enjoyable to have such a good crew working on the bike with such good experience.

How do you like working with Marnicq? I was a fan of his back in the day when he was racing to 250cc World Championship.
Yeah, exactly. Marnicq is a really good guy. He knows what’s going on as a professional as he was a professional himself. I think it’s really good because he’s had really good experience, but he doesn’t bore you. He’s here if you need him or if you’re asking for help, but if you feel good or you want to be on your own, Marnicq will never disturb you. That is something that I really appreciate. He’s always here for us.

What’s your long term plan in MXGP? How are you looking at the immediate and near future? And I also  wanted to ask you if you keep an eye on the supercross and motocross racing in the United States?
I’m still looking at my plan. My plan is that I really want to focus ontis season and get the title, but I also look at the bigger picture in the next years to come as my goal is to perform in the 450 classification also because I really like the bike. As far as America, I’m thinking about it. I think about America because it is kind of like the American dream. It’s something special with motocross there. Yeah, it depends on the discussions with Yamaha Europe and my feelings with the tracks and with the teams and everything. Yeah, for sure one day I would really like the opportunity to go to America to give it a try. It really looks like something that I should try maybe one day.