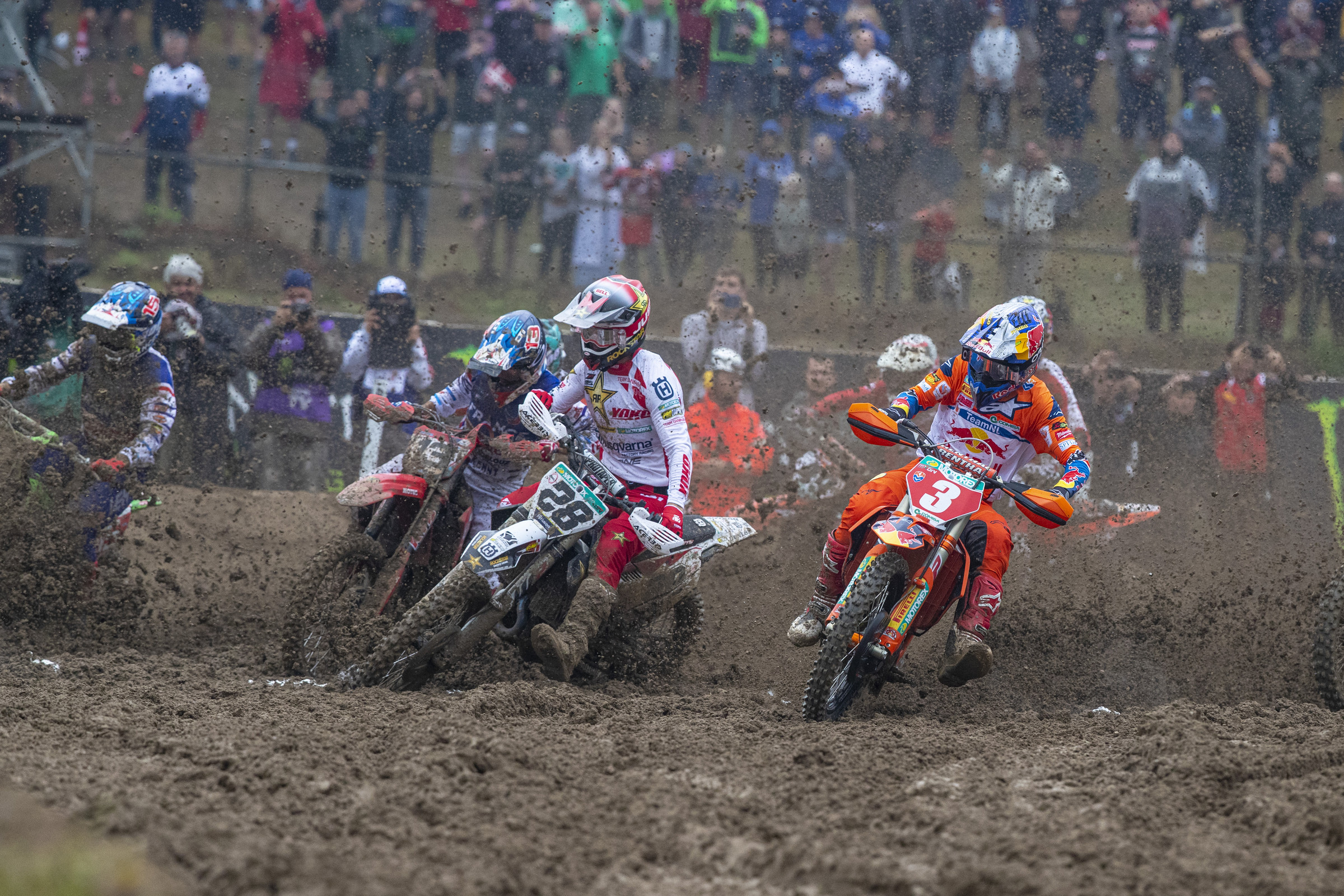 The 2021 Monster Energy FIM Motocross of Nations took place on Sunday in Italy. With tons of storylines from the 74th edition of the event, we fired off some questions to longtime pro Jason Thomas to get his perspective on it all. JT was there as part of the MXGP-TV broadcast team.

How much did the rain impact the type of racing between Saturday’s qualifying races and Sunday’s main races?

The track was totally different from Saturday to Sunday and some of that was intentional. The forecast for Sunday was pretty bleak. Knowing that heavy rains were coming, the track crew left the track harder and drier than they otherwise would. This strategic move provided a less than ideal track on Saturday but gave the most protection for decent Sunday conditions. By keeping the surface hard, the Sunday rains would be more likely to “run off” to the sides of the course. The hard base would also disallow moisture penetration, avoiding a deep slog of a track. If they had ignored the forecast and went for the absolute best conditions Saturday, the track would have been tilled deep. That tilling would create huge vulnerability for Sunday rain getting deep into the soil. At that point, there is really no way to avoid a muddy mess. Keeping the water on the surface is the goal, even if it meant a subpar Saturday.

Was the track good on Saturday? No. Was it the right move to give the best odds for a reasonable Sunday? Absolutely.

Do you think Team Italy winning helps Antonio Cairoli’s legacy or does it really matter after winning nine world championships?

His legacy is secure in either scenario. Winning nine world championships is not common. It will likely never happen for another Italian, speaking simply on how unlikely it is for anyone to accomplish such a feat. On a personal level, though, this had to be the final box to check. Further, winning on home soil was that much sweeter.

We have to ask… What’s your take on Alessandro Lupino’s first turn track cut and subsequential penalty?

Anytime you have a penalty handed out like this, there is going to be controversy. The subjective nature of it opens the door to anyone with an opinion. Remember, this penalty was handed out mid-race. Things were unfolding by the second and everyone was trying to absorb the ramifications and act accordingly. Ten positions is not a small penalty but cutting that much of the track was not a small offense. Once he went off the track in turn one, the sign boards along the re-entry area forced Lupino’s hand somewhat, as it would have been difficult if not impossible to get on the track any earlier. But he also was very aggressive in where he re-joined. There’s never going to be a perfect answer, but I don’t see anything out of line here.

Glenn Coldenhoff put nearly all the blame on himself for The Netherlands losing. Do you think he’s correct or being too hard on himself?

He’s taking the blame which is admirable. I do not believe he should solely shoulder this, though. The MX2 rider is often the most important factor in this event. They typically suffer on the start and are mired mid-pack throughout the day. The difference between fighting up to 10th or struggling to 20th can easily make the difference. Dutch rider Roan Van De Moosdijk did not have a good day (18-20) and I would argue that was more critical in this scenario. Glenn’s 15th in the opening race didn’t help anything and if you want to point fingers for the first turn crash, so be it. His third in the final race gave them a chance, though. I appreciate the maturity on the part of Coldenhoff but I think Moosdijk’s day was much more impactful. Whether success or disappointment, the MX2 result in this event is typically an overweight reason why.

Hardest question: Give us a rough estimate of where you think a USA team of JustinBarcia, RJ Hampshire, and Chase Sexton finish at this race given the conditions.

I truly believe the race would have been wide open. It was a very high scoring MXoN. Anytime you have variance at that level, anything goes. Often times, a country dominates and leaves a vacuum of excellence in its wake (USA 2007, France 2015, Dutch recent years also). This was not that type of year. Every team had to use a score that they would consider unappealing before the day started. I don’t really have a hard estimate of how things would have went, but I do believe the door was open to a good day with how crazy the results were.Of course, the muddy conditions are part of the reason we saw so many struggles for all the teams, and Team USA would not have been immune to this. If Barcia was able to utilize his mud skills and post two podium scores, anything was possible.

Which rider or nation shocked you with an underperformance on the day?

Not so much on an underperformance level but I was truly shocked at how France’s afternoon unfolded. After race one, they had a commanding lead. I was ready to hand them the trophy! That good fortune was short lived, though, as their afternoon unraveled completely. With Tom Vialle’s mechanical issue starting the slide, it just wasn’t meant to be for the French Federation.

Which rider or nation shocked you with an overperformance on the day?

The MFR by a landslide! For those that are less worldly, we are talking about the Russian team. I had zero, and I mean zero expectation for this team. Bobryshev’s best days are behind him and they really don’t have any star power that would jumpstart a hype train. Still, it’s impossible to ignore Vsevolod Brylyakov’s 7-7 score. Being able to consistently pronounce that name during the broadcast is something that I am glad I didn’t have to approach but maybe we should have. A 7-7 score from a rider that most of America has never heard of is something to highlight. Nice work, Team MFR! (Insert photo of shirtless Putin on horseback).

Does Jeffrey Herlings demolishing the field in both his motos boost have an impact on the rest of the MXGP title chase?

I don’t think it had much impact. His rivals for the championship (with Tony missing Sardinia) were not in attendance. His races felt more like training exercises than any sort of barometer. He was easily the class of the field and I believe he knew that long before the gate dropped. His focus is solely on MXGP right now. I’m sure he enjoyed dominating the field Sunday, but I don’t think it was his main focus on a macro level. Most riders could call this performance a confidence booster, but I don't think Herlings needs that at this point.

Can you confirm or deny whether you will look up how to do an“anti-rain dance” for the 2022 Motocross of Nations at RedBud?

Listen, I give up on that. I will take any and all rain-gear to Michigan next year. I expect rain and misery. It has rained every year at this race since 2017. I don’t mean a slight drizzle that ruins a Monster Energy model's hair. I’m talking Biblical deluge on an annual basis. It’s the pain I have come to expect.

Regardless, I am over-the-moon excited to have RedBud back for 2022. It was such a great weekend that I can’t wait to re-live. Win or lose, rain or shine, I’m ready.