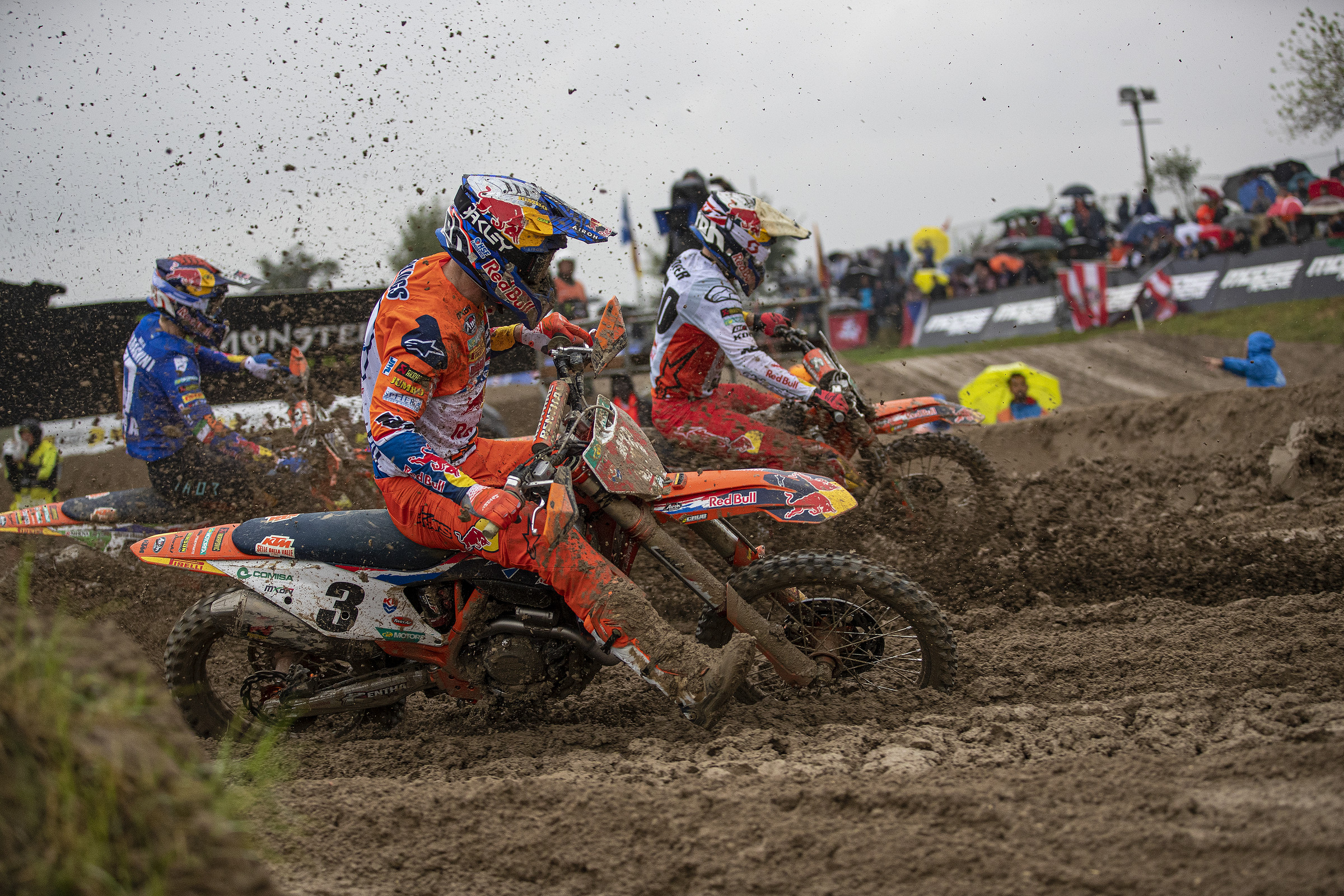 Sunday in Mantova, Italy was a wet and gloomy day, but the action on the track was about as hot as it can get. The 74th running of the Motocross of Nations went off in northern Italy and despite missing countries of the United States and Australia and the missing names like Tim Gajser, Romain Febvre, or Jorge Prado, the race was still about as thrilling as it gets, especially with the home team being involved in the battle for the victory.

After The Netherlands topped qualifying on Saturday, it seemed like their chances of repeating from their 2019 triumph were quite high. As the skies continued to open throughout the night though, the great equalizer of mother nature was looking to wreak havoc on the field as 20 nations went to the line looking to leave as champion.

The rain was pouring as riders gathered up for the first race of the 2021 Motocross of Nations which would be the MXGP and MX2 combined race. With lightning in the area and a torrential downpour soaking the track prior to the start, conditions were going to be tricky, and a good start was extra critical. As such, the first turn was quick to provide the drama for two potential favorites as Glenn Coldenhoff of The Netherlands and Antonio Cairoli of Italy came together into the first corner and both went down.

While they picked themselves off the dirt, Switzerland’s Arnaud Tonus grabbed the holeshot but was quickly undone by Latvia’s Karlis Sabulis. Sabulis led for a little while at the beginning while the early mover was France’s Tom Vialle. The MX2 rider for France had been given the inside gate selection by his team and the usual quick starter used it well to move into second place on his 250. However, he would crash out of that second-place position and drift back to fifth with a small mistake on the third lap.

The next rider to surge forward then was Denmark’s Thomas Kjer Olsen as he slowly reeled in Sabulis for the lead and took it over. Vialle picked it up and moved forward fairly well over the next few laps to make his way back into second place. Behind him, Great Britain’s Ben Watson was the fastest rider on the track as he moved around Sabulis as well to get into third place. That top three trio then took off at the front and ran nose to tail for much of the race.

The drama between Coldenhoff and Cairoli saw both of them coming from way back the whole race. Cairoli needed to stop for goggles at one point as well which slid him from 19th to 24th around the midway point. It was a rough moto for The Netherlands as a whole as their MX2 rider Roan Van De Moosdijk was also struggling with a mid-pack start and couldn’t make moves up the field.

Italy’s MX2 rider Mattia Guadagnini had a great start but fell back to around 10th early. He recovered nicely though to move around Belgium’s Cyril Genot in the final half of the moto. He would end up in fifth place behind Tonus who held on for a strong fourth place finish.

Cairoli could only muster a 21st place finish after the goggle switch as it seemed like he may be conserving, and this would be Italy’s throwaway score. Coldenhoff made it up to 15th, but Van De Moosdijk came home in 18th behind him putting The Netherlands on the back foot early.

Thomas Kjer Olsen held on for the race victory out front from Tom Vialle and Ben Watson in the end. Vialle needed to throw his goggles with a few laps to go and that seemed to take his opportunity at going for a big win on his 250F out the window. Still, with Italy and The Netherlands both having issues, France led after one race on just 12 points with a nine-point advantage on the rest of the field.

The second race of the day featured the MX2 and Open riders for each country. The Netherlands hoped getting Jeffrey Herlings on the gate would boost its chances after a bad first moto, while France had a huge opportunity to build a big lead if Vialle could continue to deliver. Off the start, it was another Swiss rider in the form of Valentin Guillod who grabbed the holeshot, but he was quickly pipped by Herlings.

Herlings was expected to be to be nearly unstoppable in the second race with no Antonio Cairoli on the gate and the Dutchman did not let his team down. He dominated. After the disappointing results from Coldenhoff and Van De Moosdijk in the first race, Herlings would need to be perfect to help The Netherlands try to capture their second consecutive Chamberlain Trophy.

Austria’s MX2 rider Rene Hofer was an early surprise in the second race as he moved around Guillod into second right away and held onto the spot for a few laps. Guillod eventually went back by him after Hofer briefly found the ground, but the Red Bull KTM man ended back in third place after KTM teammate Mattia Guadagnini also hit the ground. Guadagnini picked himself up quickly in seventh place and followed Italian teammate Alessandro Lupino around for some time. Still, the Italian duo was keeping it consistent inside the top ten, greatly helping their chances.

Disaster struck for France when Vialle, who already had a bad start, suffered a rear wheel failure that pushed him to the sidelines of the race. Things went from bad to worse when French Open rider Mathys Boisrame also crashed and found himself outside of the top 20 for a while. He would eventually make it back to 19th, but Vialle’s DNF stung, and suddenly France went from a huge advantage to a huge deficit.

Herlings was delivering the moto win for the Netherlands, and his teammate Roan Van De Moosdijk was holding strong in the top 15 but needed to stop for goggles around halfway and then immediately crashed after that. It was another long and rough moto for the young Dutchman as he clawed his way forward again but could only manage 20th. The result meant that The Netherlands would need to take the two first moto scores of 15 and 18 with them in order to drop Van De Moosdijk’s 20 in the second race (each team gets one drop score).

Herlings remained perfect out front and easily cruised to the win ahead of Guillod and Hofer. But it was Guadagnini’s sixth and Lupino’s seventh that left Italy in control heading into the final moto.

The final race of the day ended up producing one of the most dramatic Motocross of Nations conclusions ever. Italy controlled their own destiny at home, and plus the squad had Tony Cairoli ready to finish it off in storybook fashion. It seemed like things were going very well right from the start for them as Cairoli started in second behind Herlings and Lupino started in seventh. This race comprised of the MXGP and Open class riders, so it was basically all 450’s out on the track.

While Herlings immediately built a huge lead, andhis teammate Coldenhoff was better in this one by running in fourth and then eventually taking third, the Netherlands was too far back in points for it to matter. Italy, with second and seventh, was in control.

But the drama really started when race direction announced that Alessandro Lupino would incur a 10-place penalty from gaining an advantage off the track in the first sequence of corners. Lupino had been forced off in turn one and rode alongside the track into the second turn to officially rejoin the race in about eighth spot.

Even with the 10-point penalty, Italy still had enough of a gap to win the event,  with Lupino eventually moving into sixth spot. Then things went sideways. Lupino crashed trying to pass Karlis Sabulis for fifth place and dropped back to ninth. A lap later, Great Britain’s Ben Watson crashed from third place and slipped back to fourth which promoted Glenn Coldenhoff to third. The switching positions coupled with Lupino’s penalty suddenly put The Netherlands into the lead by a single point!

Lupino then made a pass on France’s Boisrame. Lupino had pulled Italy into a tie for the win. The Dutch held the tiebreaker, though, on account of Van De Moosdijk’s 20th being better than Cairoli’s 21st when drop scores were factored in. Lupino needed one more pass and the pit wall for Italy was adamant that he get it done..

Eventually, Lupino was able to catch and pass Sabulis, who he had crashed trying to pass earlier to move into seventh place. This put Italy ahead by a single point. He continued to make small mistakes, though, and Sabulis stayed closed with Motorcycle Federation of Russia’s Vsevolod Brylyakov closing in as well. Down to the final lap, it looked like Lupino might barely hold on, and just one loss of position would swing the victory to the Netherlands.

Herlings claimed the double moto sweep and did everything he could do for The Netherlands. Cairoli ended up second in the final race for Italy with Coldenhoff putting in his best ride of the weekend for third. Then everyone held their breath to see if Lupino could finish it. When the KTM rider crossed the line, it was confirmed. Lupino ended up seventh on track, but his 10-place penalty dropped him to 17th in the race. Despite that, Italy had won the Motocross of Nations on home soil by a single point.

The Italian crowd burst into cheers and nine-time World Champion Antonio Cairoli was left in tears. After so many years of falling just short at the Motocross of Nations with Italy, Cairoli finally checked the big one off his list. The moment is of course all the more special as Cairoli had just announced his retirement at the end of 2021 less than two weeks ago.

So, Italy reigned supreme in 2021 ahead of The Netherlands and Great Britain, who all ended up within two points of each other. A wild day, a wild race, and for the first time in nearly two-decades, the Italian colors waved as the winner in the Motocross of Nations.