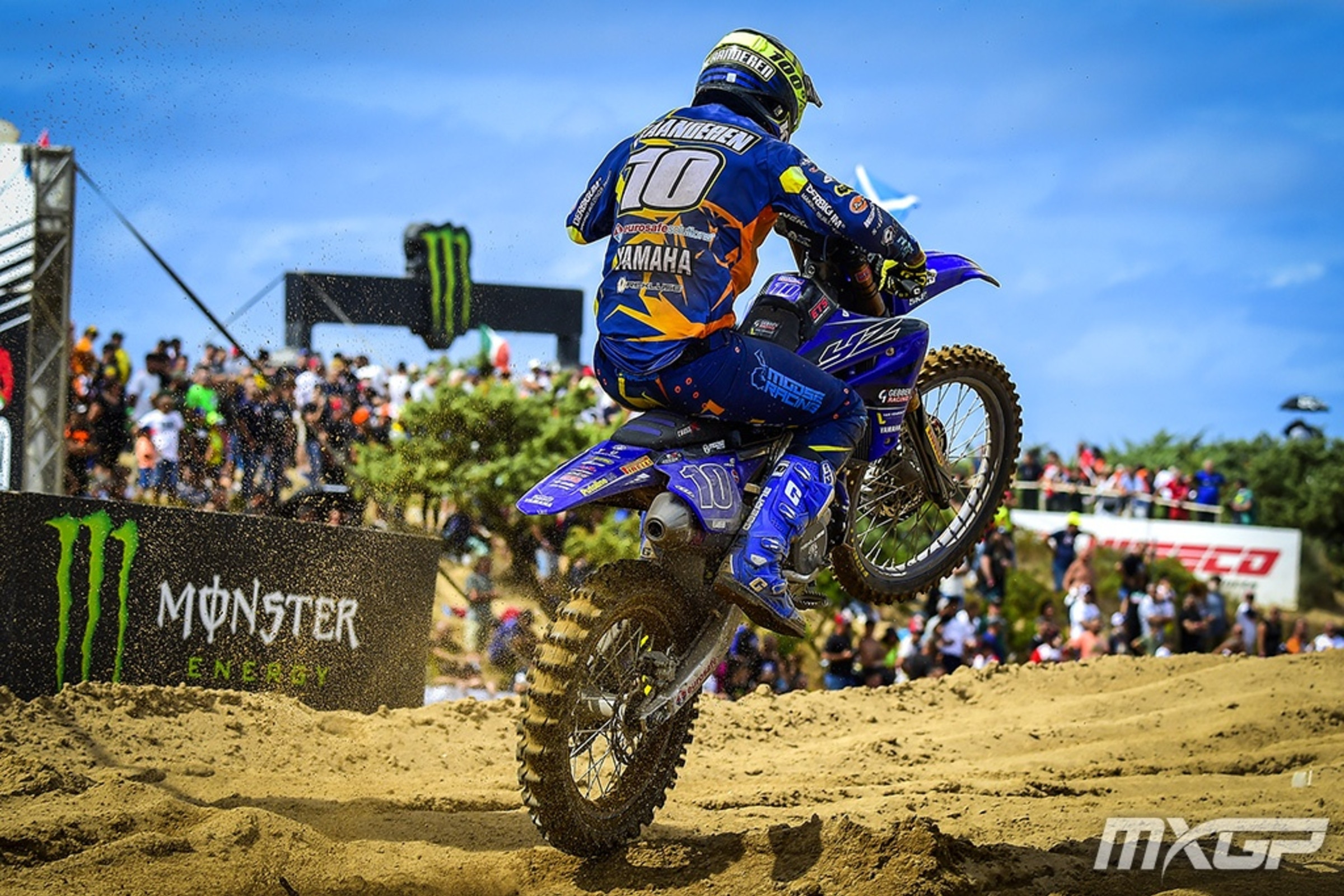 You might remember Calvin Vlaanderen from his MX2 days in the FIM Monster Energy World Motocross Championship. He’s a South African but has Dutch heritage, and he was thus able to race for the Dutch Motocross of Nations team that absolutely dominated the 2019 Motocross of Nations in Assen, along with teammates Jeffrey Herlings and Glenn Coldenhoff.

Vlaanderen is now in the MXGP class and has started to turn his riding around in recent weeks, culminating with a career-best 4-4 over the weekend in Sardinia. He sits 11th in points in his second year in the 450 division. What’s privateer life like in MXGP? Lewis Phillips of MX Vice asked him after the race.

Lewis Phillips: I don’t know what to say. We’ve had positive interviews before, you’ve ridden well, you’ve done good things, you’ve started in the back and come forward. But today was another level. You were right there with the top guys in the championship. You were that level! Did you know this was coming?
Calvin Vlaanderen: It’s been coming for a while now. Even in Turkey I felt good. Just couldn’t put it together, and that’s why I was so bummed. I would tell the team “I feel really good” but then the results on paper don’t show it. Finally, today the results on paper look good and I’m happy. All of the hours I’ve put into the sport, it’s all worth it. As I was going over that finish line jump, you think about all the bad says, all the injuries, and it’s all worth it. Such a nice feeling to have a good day, no stupid things, 4-4 on the day, my best result in the class. Nothing special, I just felt good on the track all day. Two good races, can’t say much more.

I tweeted today that you’ve arrived. No one in the paddock can say, “Can Calvin do this?” To say you’ve made it sounds a bit strong, but in a way, you’ve made it because you can show people in this class how good you are.
One hundred percent, but I also believe I have more in me to show. Like the first moto, passing [Romain] Febvre, passing [Jeremy] Seewer, those guys, it’s such a nice feeling. I feel like I belong there, battling those guys.

Was it hard to stop your head from going away in those motos? Because when you’re passing those guys, you’re probably saying “Oh! This is good! This is good!” Was it hard to stay calm?
Not really. The first moto I had a really good flow the first 20, 25 minutes. I’ve been working on that. The first ten minutes is really important, just to get away from the craziness around 10th position. That’s usually where I’m at and it’s just chaos back there. Today I did that 10-20 minutes I had good speed, good flow. Then I thought, “P3, this is crazy.” I started getting tight, I started sitting down too much, getting tired. The last three laps I was just completely finished. Second moto I had a really good start, but when you hit the soft stuff, you really see the factory bikes start to pull. I still managed to come through the corner okay. I didn’t push that hard at the beginning because I didn’t have much energy left from the first moto. I wouldn’t say I was lucky, but other guys made mistakes and I got through.

You mention factory bikes. As you’ve gotten better results this year, has Yamaha started to chip in with like, “Here’s this part”? Have your results brought in any advice, help, or attention from the big wigs at Yamaha?
Not really. I was kind of pissed off in Turkey. On social media, they said, “The fastest Yamaha rider was Glenn Coldenhoff in P10.” I was in P7. I was the best Yamaha rider today so I hope I get a mention, or I will be pissed off. Nothing, bike wise. They haven’t come to me with any parts or anything. I think it’s because Rinaldi has a pretty good hold on the factory there, and he’s quite secretive with what he shares and what information he gives out. We haven’t changed the bike since the beginning of the year.

I feel like in America, I feel like riders in positions and teams like yours, the factory starts chipping in and giving more attention. It’s more closed off, this paddock.
I think they’re scared if a privateer starts beating the factory team.

Yeah, it’s cool you doing it once, but if you do it five weeks in a row….
Yeah, I don’t think they want the privateer rider to be beating the factory bikes. I understand that but it also gives me motivation to beat them.

So, next year. It’s only been 10 days since Turkey. I think you’re looking forward to waking up in the morning and checking your emails [Note: there are rumors that other teams are asking about Vlaanderen’s services for 2022]. Things must be moving along quite nicely.
It’s just so nice to get a good result. The results do the talking. I’m looking forward to the next week or so before Mantova, just to get this all sorted and try to move forward with the direction I’ll be going. We’ll see. It’s a good time to get a good result and we’ll see what happens the next two weeks.