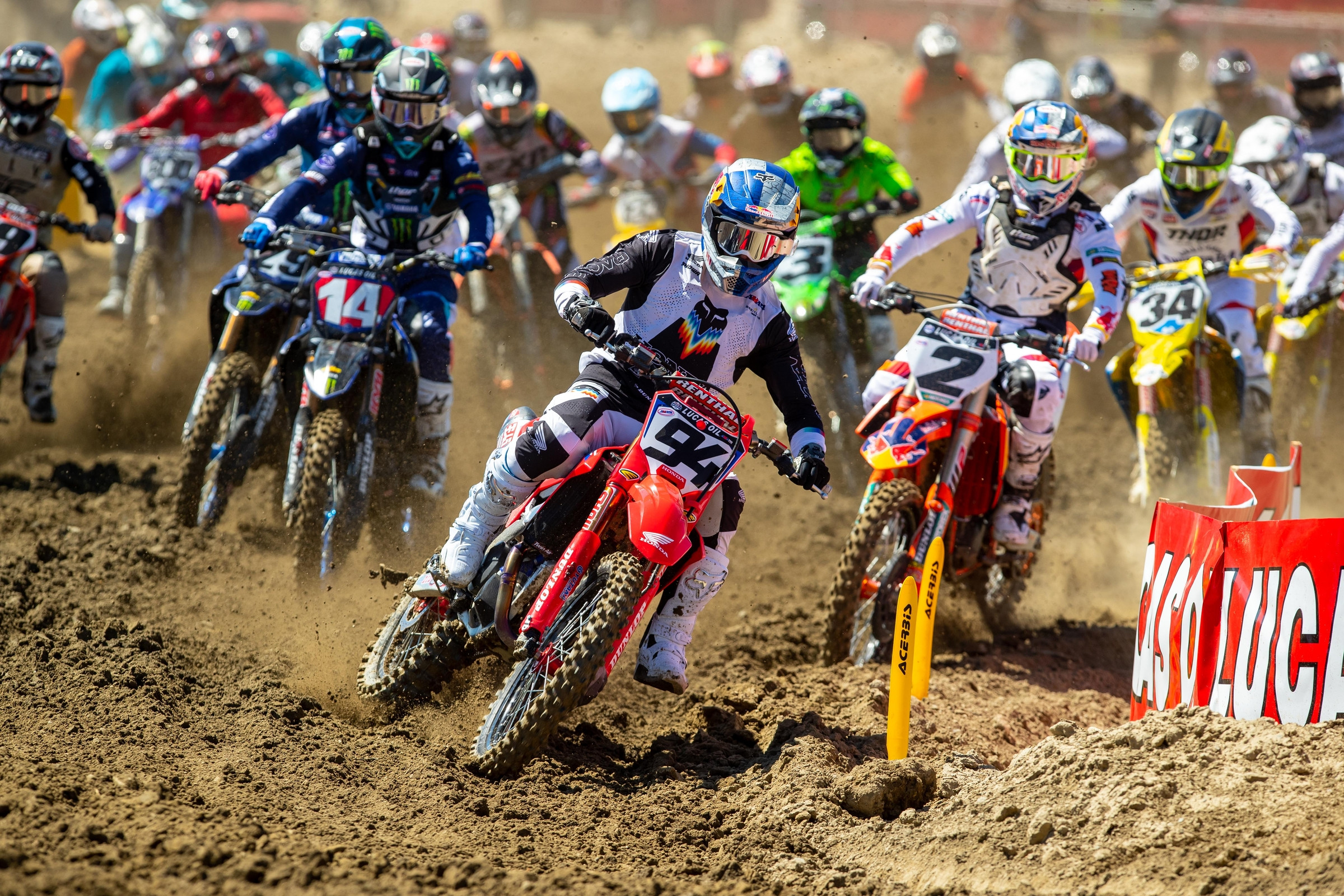 A little over three months after the season opening round of the 2021 Lucas Oil Pro Motocross Championship, we were back at Fox Raceway again for a second time this year on Saturday. Unlike late May, the Southern California summer was not as kind this time through for the contingent of Pro Motocross riders. With temperatures soaring into the triple digits on occasion throughout the day, it was clear riders were simply looking to survive the day.

Coming into this penultimate round of the championship, three riders in the 450 Class were looking at a different reason to survive. With Dylan Ferrandis on the verge of clinching the championship one round early, only Ken Roczen, Eli Tomac, and Chase Sexton remained mathematically alive as they attempted to keep Ferrandis from clinching.

Chase Sexton then announced on Friday he would miss the Fox Raceway 2 National with an enlarged spleen, so it was down to just Roczen and Tomac. Roczen sat exactly 50 points back of Ferrandis, and if the Frenchman could outscore Roczen on the day, he would eliminate Roczen from contention going into the finale. Tomac’s situation was much more dire as he sat 71 points down to Ferrandis and needed practically a miracle to win the title.

Ferrandis was a winner at the opening round here at Fox Raceway back in May and even after his shock win in his first ever 450 Class start, it still seemed like the other championship veterans were going to have a lot more to say this summer. Ferrandis slowly dismantled that talk though throughout as he consistently landed on the podium with only two fifth place finishes as his worst all year while Roczen and Tomac struggled on different occasions.

With a title hanging in the balance, it was time to go racing in California. Roczen quickly found his way to the front in both motos, and it looked as though we might see him push this thing to Hangtown. However, in the first moto, Ferrandis methodically worked up to Roczen and passed him for the lead with about half the moto still to go. As Ferrandis sprinted away from Roczen, it seemed the championship was disappearing with him

A first moto victory with Roczen eventually slipped to third as he labored in the heat saw Ferrandis extend out to a 55-point lead between motos. Roczen and second place man Eli Tomac both skipped the podium interviews for TV to haul back to the semi in the pits and hop right into their ice baths. Ferrandis spoke candidly about the heat being a challenge but also appeared perhaps the least phase of anyone in the first moto.

As the second motos got underway, Roczen again quickly found his way into the lead, but it was short lived. Dylan Ferrandis matched Roczen’s ridiculous opening lap pace to pass holeshot winner Cooper Webb and eventually Roczen for the lead before the first full lap was complete. Roczen quickly fell off Ferrandis and it looked like the Frenchman was en route to a 1-1 championship clinching performance. But Eli Tomac came alive in the second moto, and he suddenly was taking chunks out of Roczen and Ferrandis. He made quick work of Roczen for second and got to and around Ferrandis for the lead before the halfway point of the race.

Ferrandis did not put up much of a fight as Tomac posed no threat to hi clinching possibilities and Ferrandis appeared perfectly content to remain in second place. Roczen unfortunately continued to fade as he ultimately fell back behind Webb, Christian Craig, and Max Anstie to come home in sixth place.

But the war seemed lost anyway as Dylan Ferrandis seemed determined all day to make this title his before we made it to Hangtown. And with his second-place finish in the second moto at Fox Raceway 2, Dylan Ferrandis became the 2021 Lucas Oil Pro Motocross 450 Class champion. It is the second time a Frenchman has ever won the title after Jean-Michel Bayle did it in 1991 and it’s also the third time in the last 11 years a rookie claimed the title after Ryan Dungey in 2010 and Ken Roczen in 2014.

It was a monumental moment for Ferrandis, and he simply could not describe the emotion and elation he was feeling from claiming the championship today at Fox Raceway.

“I think I’ve run out of emotion right now,” said Ferrandis. “It just was hard. Today was hard, last weekend was hard. I pushed really deep inside to get this result and it’s hard right now to feel something because I’m so tired, I’m so thirsty. I dreamed when I was young to be a 250 champion, but I think I never dreamed to become a 450 champion. So, it’s not even a dream come true, I think it’s the best thing I will ever do in my life and now it’s done.”

While Ferrandis clinched the 450 Class title a round early, the 250 Class was still plenty alive with Jett Lawrence sitting just 11 points up on Justin Cooper coming into today. Cooper had been slumping hard since the break after round seven and his starts disappeared with his performance as well. On the flip side, Lawrence’s starts had drastically improved and he used good starts at Ironman to put in his first ever 1-1 moto sweep of his career.

Now coming into Fox Raceway, Lawrence was returning to a track where he had won the last two times we raced at this circuit in Pala, California. It seemed all was trending in the right direction for the Honda HRC man with two rounds to go while Cooper was left with a mountain to climb to flip the tides back in his favor.

As the gates dropped on the day, it was actually Michael Mosiman who shot out to an early lead in the first moto. After starting in third place behind Max Vohland, Jett Lawrence quickly made his way into second place and set sail after Mosiman ahead of him. Around the time Lawrence finally got to the rear tire of Mosiman with about half the moto left to go, Mosiman laid his GasGas down before the mechanics area in an awkward crash that slid him all the way back to fifth.

Behind them, Justin Cooper started just inside the top 10 and was going back and forth from there. He briefly made it up to seventh only for Hunter Lawrence to re-pass him and begin pulling away. The elder Lawrence brother then began to fade back to Cooper late and the #32 did well to pass Lawrence back as well as Vohland and Joshua Varize to find his way into fifth place.

The damage was done though as Jett Lawrence converted his strong ride into a race victory ahead of Mosiman, RJ Hampshire, and Jo Shimoda with Cooper rounding out the top five. That one moto alone nearly doubled Jett Lawrence’s lead in the championship from 11 out to 20 with just three motos still to go.

After a gate malfunction threw everyone for a loop in the second moto, Jett Lawrence eventually rocketed out of the gate to grab the holeshot. Cooper had a better start this time settling into third behind Mosiman, but he would stay there much of the first half of the race while Jett scurried away out front.

Eventually, Cooper found his way around Mosiman to get into second place in a terrific salvage ride, but again, Jett Lawrence simply had the upper hand. For the second week in a row, Lawrence stamped a 1-1 score onto his results sheet and also extended his championship lead out to 23 points along with it. Now the 18-year-old Australian sits just two solid motos at Hangtown away from winning this championship in just his second full season.

“I think everything just fell into place,” said Lawrence about his second straight round of sweeping the motos. “It’s a hard day today, it’s very hot, and I think that’s one of the hardest weekend’s we’ve had in a while. It’s a different type of heat that Florida, it’s not humid, it’s just real torture out there. It’s good to go 1-1 back-to-back, that’s for sure, and this dream is starting to come true. It’s awesome and I’m pumped I was able to go three for three at Pala.”

Quite an interesting and very hot day at the races to set the stage for our finale in one week’s time. Join us for the Hangtown Motocross Classic on September 11 as we close the final chapter on Lucas Oil Pro Motocross in 2021.