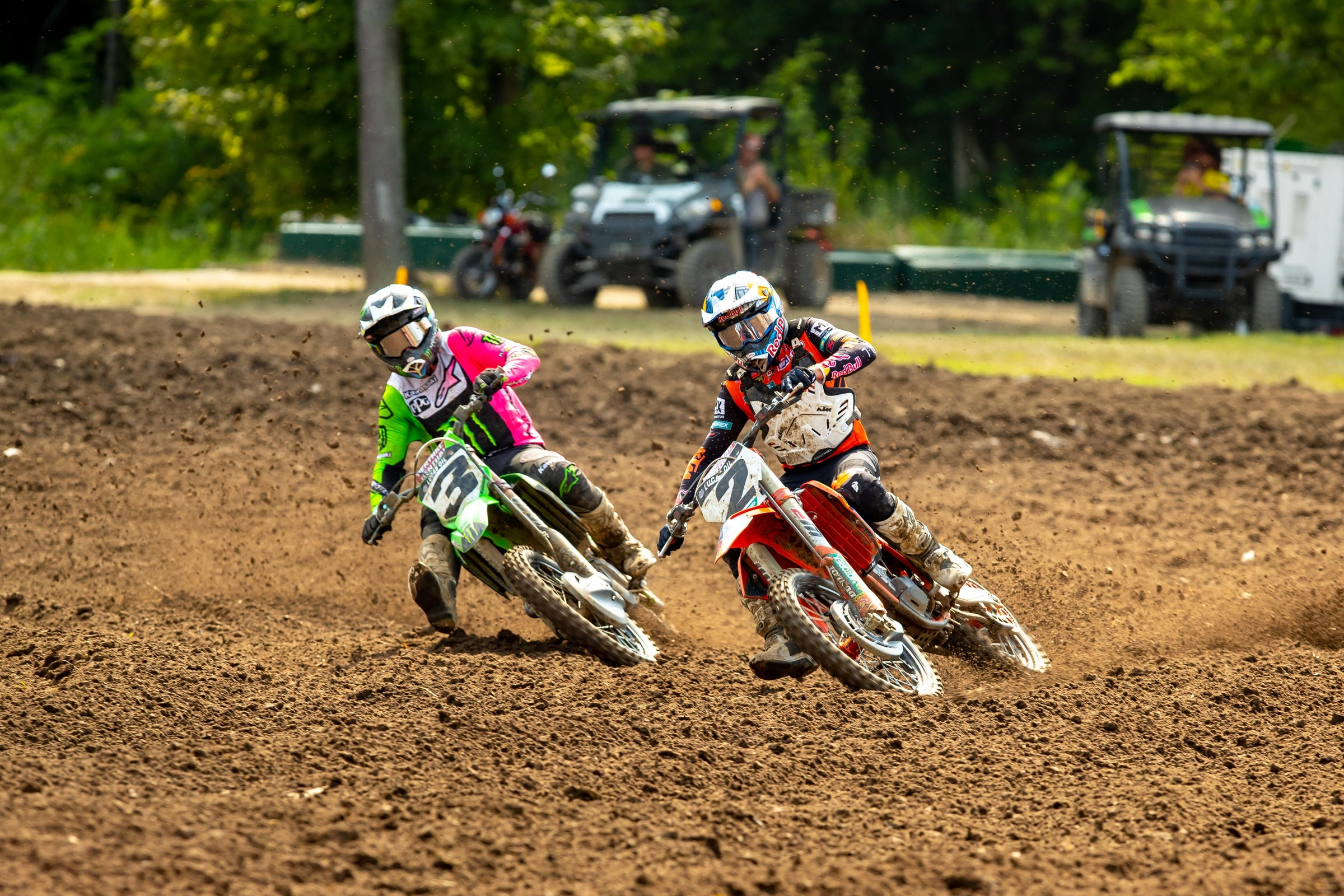 Technically there are four riders who could still win the 450 National Championship—Dylan Ferrandis, Ken Roczen, Eli Tomac, and Chase Sexton—but none of them are within real striking distance. Roczen is closest, and he’s fifty points back, which means if Ferrandis puts any more points on Roczen, or even ties him for points at Fox Raceway, he’ll clinch the title. He’ll also have to avoid giving up more than 21 points to Tomac, and he can’t give up more than 47 to Sexton, but something tells us that won’t be a problem (Sexton is out for Fox Raceway 2). Look for Ferrandis to try to wrap this thing up this weekend. –Aaron Hansel

It’s possible 250 Championship leader Jett Lawrence could clinch the title this weekend, but it’s a whole lot less likely than it is for Ferrandis. Lawrence leads Justin Cooper by 11 points, and if he’s able to put 39 points on him on Saturday, which seems pretty unlikely, this thing’s over (Yes, Hunter Lawrence is still technically in this thing but c’mon, he’s 95 points back of Jett). Expect the 250 National Championship to go down to the wire at Hangtown. –Hansel

Back in the Fight

If we’re going to talk about Lawrence’s, chances of clinching the championship a round early we’ve got to talk about the fact that Cooper is far from being out of this fight. Yeah, he had an unfortunate day at Ironman and gave up 14 points (and the red plate) to Lawrence, but it could just as easily go the other way at Fox Raceway. Cooper absolutely has to make sure he finishes ahead of Lawrence on Saturday, no matter what, and a pair of moto wins would be massive. If Cooper can go 1-1 he’d inch at least six points closer to Lawrence, which would put him at a five-point deficit going into the finale at Hangtown. But if he gives up any more points to Lawrence this Saturday, his championship hopes will look pretty bleak. -Hansel

Back in the Winner’s Circle

It was a well-known and chatted-about fact that three-time 450 National Champion Eli Tomac hadn’t won an overall yet this year, and as the races continued to play out, it started to look like a very real possibility he might not get a win at all this summer. Well, Tomac officially put an end to that talk at Ironman when he finally rejoined the winner’s circle by going 2-1. The question now is, will he get more? And if he does, could he possibly go 1-1? The last time he swept both motos was at Budds Creek in 2019. Will he break that streak at Fox Raceway? –Hansel

Michael Mosiman had a pretty decent day at Ironman after missing the previous two rounds due to being banged up in a practice crash. The Troy Lee Designs Red Bull GasGas rider went 3-6 for fourth overall, which is one of his best performances of the summer. He’s shown some pretty good speed in 2021, but just hasn’t been able to get a win or be on the podium consistently. We’ll see if he can put a little run together to close out the season. –Hansel

Horsepower is extremely important in just about any form of motorsport, but in the 250 Class of Lucas Oil AMA Pro Motocross, it’s absolutely vital. Without factory engines, it’s pretty unlikely you’ll be able to get anywhere near the front of the pack at any time. That’s why Ty Masterpool going 6-7 for 7th overall is so darn impressive! The privateer out of Texas was absolutely phenomenal at Ironman and even ran as high as third in the second moto. Will he put in another strong showing at Fox Raceway? -Hansel

Better late than never for Cooper Webb who after making a frame change prior to the Ironman National last week, found himself on the podium right away. The 2021 Monster Energy Supercross champion has not had a great motocross season coming off the supercross title, but he’s consistently been getting better and now he’s mixing it up at the front late in this championship. While the other guys may be more focused on each other still with the championship barely alive, Webb might have an opportunity to sneak in and make the frustrations of this season disappear with a big win down the stretch. –Kellen Brauer

Joshua Varize has been solid all year long about his KTM Orange Brigade 250 SX-F. As such, he has been rewarded with a fill-in shot at Rockstar Energy Husqvarna for the last two rounds. After Jalek Swoll went down with injury at Ironman and Stilez Roberston just announced he would be done for the year as well, Husqvarna had the seat alongside RJ Hampshire available and offered it up. It’s a big opportunity for Varize who is still looking around for a spot in 2022 and a few strong results at Fox Raceway and Hangtown could really boost his stock. Look for the #241 on white today. –Brauer

Zing! What A Story

Dutch rider Rick Elzinga finds himself on American soil for the last two rounds of Pro Motocross. The young KTM rider sits third in the EMX250 standings but appears to be without a ride for 2022. Cue VitalMX forum member “Brent” to the rescue as he has flown Elzinga out to California to compete at Fox Raceway 2 and Hangtown aboard an AEO Powersports KTM he just bought for Rick to ride. Elzinga has talent, and maybe he can turn some heads on both sides of the pond similar to what Alessandro Lupino was able to do earlier this year. Watch out for the #772 KTM today. –Brauer

The Ironman National last week was hot and muggy. Today at Fox Raceway, it’s just going to be straight up hot. With temperatures expected to soar into the high-90s today, riders might feel the late season grind wearing on them even more. It also means the notoriously hard-packed track will get even harder today as the sun beats down on the Southern California soil. Look for fatigued riders and blue grooved racetrack by the end of the day today. –Brauer