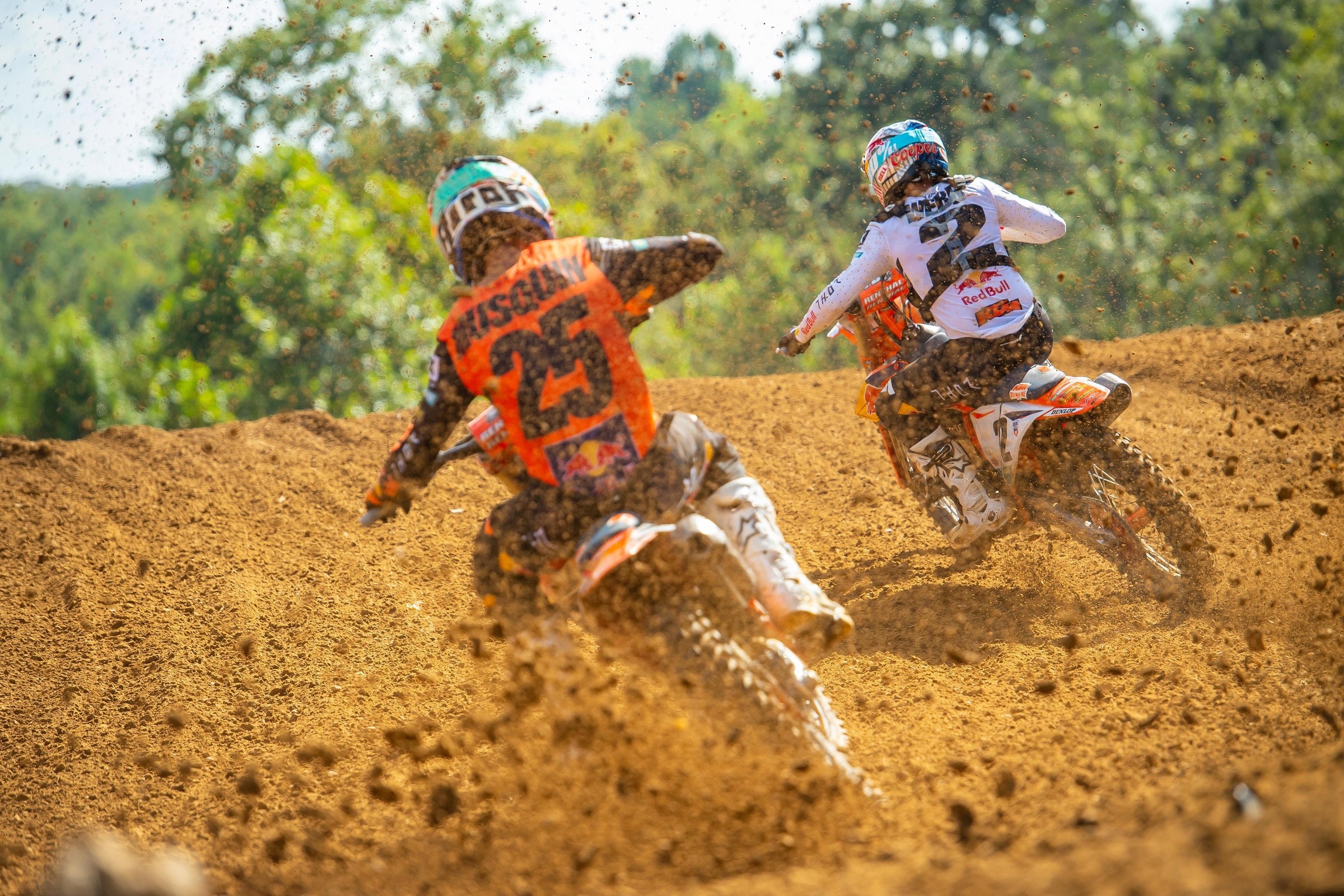 To say things are tight in the 250 National Championship right now would be like saying Elon Musk has an iron or two in the fire. Last week just four point separated championship leader Justin Cooper and Jett Lawrence, and now, with just three rounds left, the gap is a mere three points! Neither rider is giving the other an inch, which is making for a thrill ride in the points. The two don’t seem to find each other on the track much, however. How exciting would it be if they went head-to-head for the points lead on the track at Ironman Raceway? –Aaron Hansel

A quick look at the results shows an emerging trend that’s got to be somewhat troubling for Cooper. At the last four rounds the Monster Energy/Star Racing Yamaha rider’s results in the second moto have not been as good as the first. He went 2-3 at High Point, which is no big deal, but then he went 1-8 at Washougal, 1-4 at Unadilla, and 1-4 at Budds Creek (where he was sick). Are those catastrophic losses? Not exactly, but they were all opportunities in which he could have really stacked points on Lawrence, his title rival. If Cooper can get his second motos figured out he’ll be doing himself a huge favor down the stretch. -Hansel

Jeremy Martin isn’t going to win this championship. You’ve got to be in it to win it no matter how fast you are, and Martin, who missed some time after hurting his wrist at Thunder Valley, hasn’t been. That said, he sure is making a case that he would be the 250 National Champion if he hadn’t gotten hurt! He’s won more motos (six) than anyone, he’s won more overalls (three) than anyone, and despite going three motos without scoring points, still sits third in the championship. Will he continue to pad his numbers at Ironman Raceway, or will Lawrence and Cooper box the former champ out? -Hansel

If you’re looking for the most exciting points battle in the 450 Class, you’ll find it in the struggle for fifth between Cooper Webb and Marvin Musquin, who are both tied for the spot with 240 points each. Both riders have had their struggles this season and losing a spot in the points is the last thing either of them wants. If Webb can wrangle the spot, and hold it until the end of the season, it’d mark the best season’s end standing of his 450 career. But for Musquin, whose worst overall series finish on a 450 is fourth, it’d be his worst 450 summer to date. Who will leave Ironman with the advantage? -Hansel

So far Joey Savatgy’s second half of the summer is proving to be better than the first. He’s been, for the most part, consistently in the top ten, and thanks to some good starts at Budds Creek, he was able to go 6-7 for sixth overall, marking his best result of the season. On Instagram the always-hard-on-himself-Savatgy said his riding and speed weren’t his best, but c’mon, you don’t luck into a sixth overall at this level. We’ll see what kind of heat Savatgy brings to these final three races. -Hansel

There’s very little to say about Dylan Ferrandis right now, other than just how incredibly strong he’s been this summer. He showed the slightest hint of not dominating when he finished off the podium in motos at Spring Creek and Washougal and had absolutely nothing for Ken Roczen at Unadilla. For a moment, it looked like the tiniest bit of light might be showing at the end of Roczen’s championship tunnel—until Budds Creek. Roczen was terrific, but Ferrandis refused to let him gain any points. The two swapped moto wins and tied in points for the day, putting Ferrandis a step closer to closing this thing out. Right now, he’s 39 points ahead of Roczen, which means if he pads his lead by 11 (and wins another overall) over the next two rounds, he won’t even have to race the finale to take the crown. -Hansel

Last week at Budds Creek, Coty Schock turned in a career-best seventh place in the first 450 class moto. Schock has been one of the big stories of the year as he continues to make waves in a very heavy loaded 450 class. But that is slowly changing as we work into the final stages of the season as injuries have really started to pile up and the field is a little less power packed. As such, not only Schock, but several other privateers are knocking on the door more and more with names like Ryan Surratt, Justin Rodbell, Chris Canning, Jacob Runkles, Scott Meshey, and many more have found themselves in very solid points paying positions of late. Now with Justin Barcia, Christian Craig, Dean Wilson, and Max Anstie all sidelined for Ironman, even more riders could find their way into some good finishes. –Kellen Brauer

Eli Tomac has three races left in his time with Monster Energy Kawasaki, but what he doesn’t have yet this year is an overall win. Tomac has been very close on a number of occasions this year and even has three moto wins already to his credit. In what was ultimately an off year for Tomac in his title defense in 2020, Ironman was a bright spot for the three-time champion as he went 2-1 to win almost exactly a year ago to the day. Tomac historically does well at this track and if might finally be where he gets his name up on top of the board this year. –Brauer

Aaron Plessinger’s violent crash at the Unadilla National two weeks ago left him battered and bruised but fortunately not broken. Just one week later, he was even running inside of the top 10 in the first moto at Budds Creek, but the pain was simply too much and Plessinger pulled off and withdrew from the remaining moto on the day. Now that he has had another week to rest up, could Plessinger get back to where he was prior to the wreck this weekend? He had won at this track twice in the 250 class and the rutty Indiana soil seems to bode well for Plessinger’s skillset. –Brauer

Austin Forkner hasn’t quite looked himself most of this summer of racing since coming off his broken collarbone in supercross. However, he has look much improved since the three-week break coming into round eight. Aside from a first moto DNF at Unadilla, Forkner has since gone 6-4-5 in the last three motos. As he essentially has nothing to lose in the final three rounds while the title fight remains fierce, Forkner could sneak into the fight out front and maybe end his season on a high note which would be huge given the struggles he’s had in 2021. –Brauer