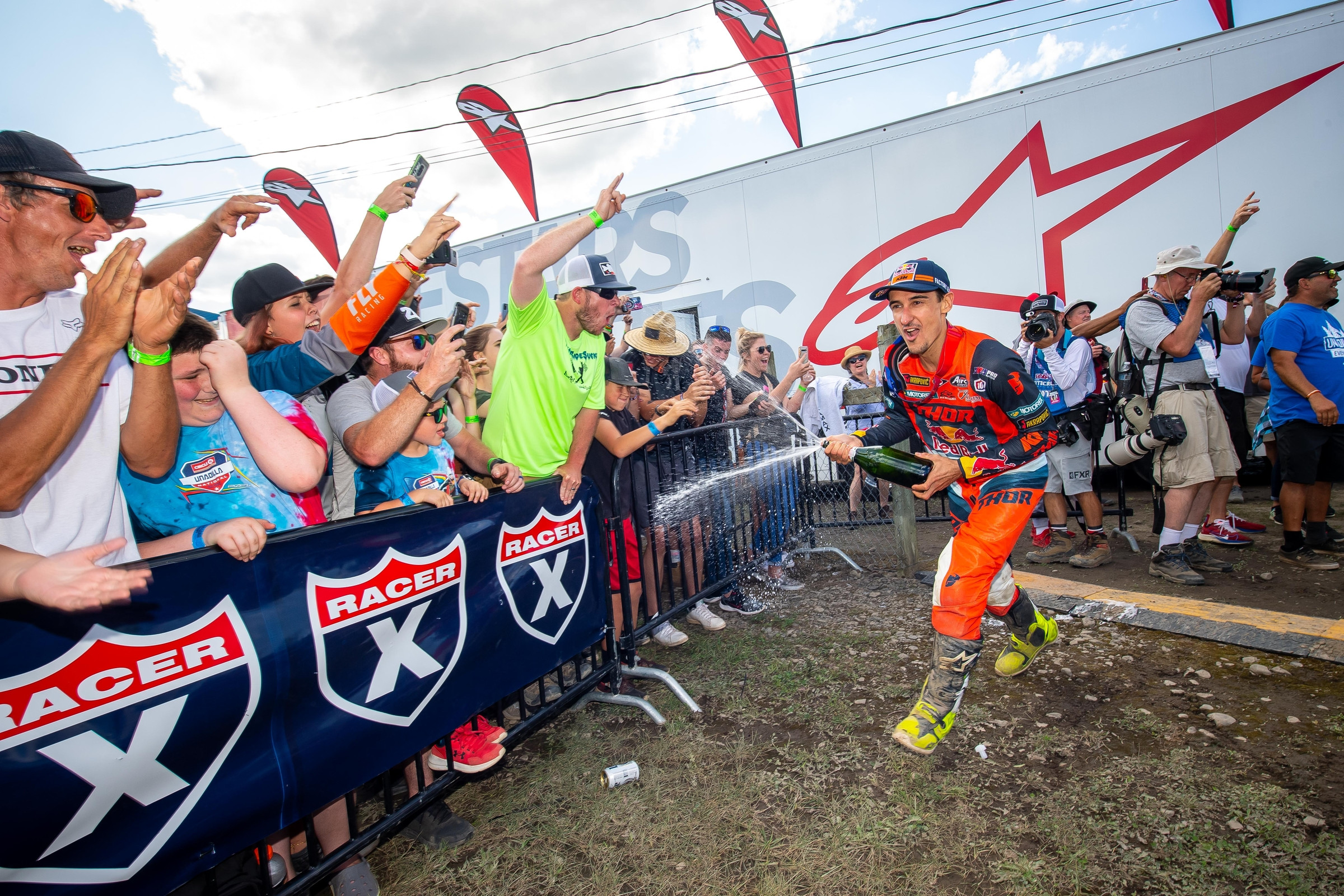 Between What About Marvin?

Not the season Marvin Musquin was hoping for. The Red Bull KTM rider, long a podium mainstay, went through a wildly inconsistent campaign in Monster Energy Supercross, which included a race win but also far too many crashes, bad starts and assorted issues. In Lucas Oil Pro Motocross, the story is simpler: he just hasn’t been on the lead pace. After hovering in the 7-9 spots all season, he finally he showed his old form at Washougal with fast qualifying times and a moto podium. Then at Unadilla he turned 4-4 scores into his first overall podium of the summer.

Now is the time when Marvin could start barking about being back, or tell anyone who doubted him that he still has what it takes. But the Frenchman is too honest to do that. Even he is not sure what the issue really has been this year, or if he can get back to his old heights. Could this just boil down to stiffer competition? Can he step up and match them? He’s trying.

Here’s what Marvin had to say after the race.

Racer X: You’ve been a podium guy in basically every 450 national you’ve ever raced, until this year. Now you’re back. Is there anything you can point to?
Marvin Musquin: Um, I mean, I kind of want to say it’s pretty simple when you look at the supercross season, how stacked it is, and then moving into outdoors it’s basically the same. There’s so many good guys. Plus, to be honest I never, yeah, I’ve never been really, really happy with the settings. We’ve been trying to find, obviously, solutions, but it’s not easy. We went back to some original settings from the past few years and tried to stay with that. Overall, Washougal was better, good speed but not consistent. Today was better, two times fourth and I want to say good enough for the overall podium, and the riding was good.

Can’t answer that one! Okay, so where are you doing your riding this summer?
Same as the past few years, I’ve been at Aldon’s [Baker’s] and then I’ve been in California. I like to do both. Obviously when we go racing at Washougal, I always go to California a week or two before. Then I stayed in California after. Now I’m back in Florida and I will stay there three or four weeks, and then I’ll be back in California for the last two weeks.

So nothing really major has changed?
Um, let me think…. not really.

I like how you’re really thinking, and trying to give me a real answer.
I know! It’s just, it’s a really tough sport, and there are younger riders coming up. It’s just like I said, the competition has been really tough. You can see, for example, the Yamaha. Before it was maybe [Justin] Barcia getting a good result, but now you have three riders and they’re all very good every week. Then Honda, they have two strong guys. Then Kawasaki. What I basically just want to say is the competition is really tough and everyone is working so hard. Some team might figure it out a better way to get starts, then they start in front of you. It’s just racing. It never stops, you never stop trying to improve. I know KTM has been putting in a lot of work, and we also know KTM is coming in new bikes and stuff. It’s been a few years where we’ve had the same bike. I know they’re going to improve it.

How’s the atmosphere here at the races? Is it still the same as when you were winning races, or has it been different when the results aren’t coming?
Yeah, it has not been easy because I want to give back to the team with results. I have always loved winning, for myself and for my wife, my family and my friends supporting me, but also for the team. There’s nothing better than celebrating a win or a great result with the people that work with you. So yeah, when you’re getting seventh or eighth it’s not easy, but at the same time they know the competition is better and they know we have to improve and keep grinding.

So at no point where you giving up on it. You just always felt that if you kept grinding and digging you’ve be back on the podium?
Yes and no. It’s definitely not easy. You might figure it out one week, but to be consistent, that’s the hardest part of racing. Every track is different and you have different feelings on every track.

I think what we’re seeing here is the gap is smaller. If you were 10 percent better than a guy, and you were off by five percent on one day, we don’t even see the difference in the results. You still beat that guy. Now it’s like if you’re off one or two percent, that’s several positions.
That’s right. And we lost a couple of guys today. Aaron [Plessinger] had a big one in the first moto, [Chase] Sexton had a big one in the first moto but he came back in the second moto. Man it’s tough, but there’s a lot of good riders. Man, there’s some times where I’m like “Shit man, do I still have it?” That’s normal, I’ve been racing for a long time. But today I had it. I need to be like that, smart and think about what I’m doing and not overdo it, because that does not work.

Where you doing that? Overdoing it?
I think so. Yeah. On the track and maybe during the week, always, you have to be smart.

Do you have anything set for next year? A few months ago we heard some things but we haven’t heard much lately.
No, not yet. We’re still working on some things. My goal is to race next year.

Can you talk about being part of the French Motocross of Nations team this year? Do you actually know the other riders on the team very well?
Yeah on the 250 we have Tom Vialle, he’s the World Champion in the 250 class so he’s a great 250 rider, but Maxime Renaux who is leading the 250 championship, he doesn’t want to race to protect his championship. It’s really tricky for those guys. Mathys Boisrame is also a good 250 rider but he is going to move up to a 450 next year, so we will be our other 450 rider.

Do you have a relationship with those guys?
I know Tom a little bit, being teammates with KTM even though he races over there. The funny part is, I’ve raced with his dad when I was younger doing supercross! I don’t know Mathys very well, but it will be a fun time. This is a cool event, it’s very special.