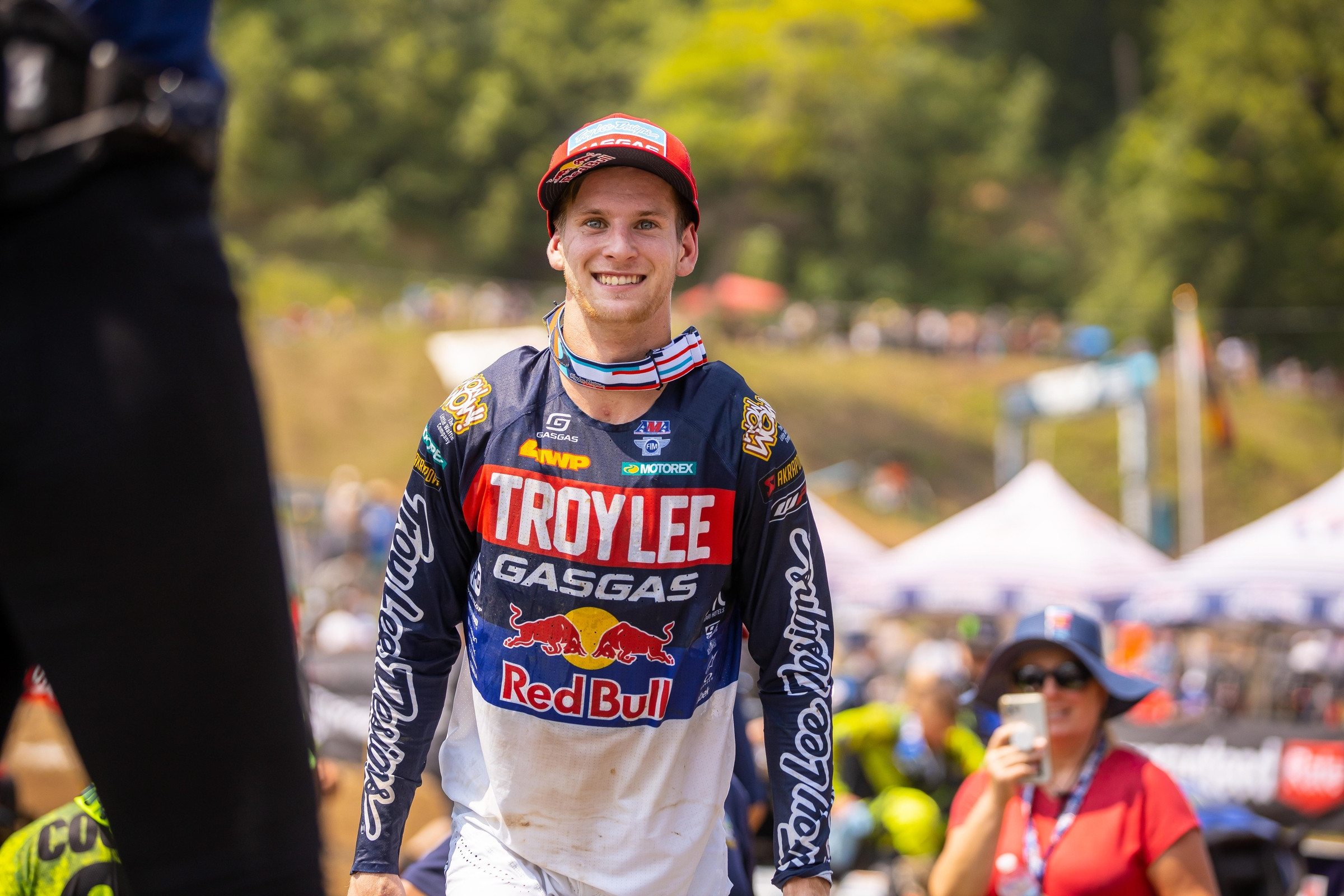 It was a pretty solid day all around for the Troy Lee Designs/Red Bull/GasGas Factory Racing program at Spring Creek MX Park on Saturday. After Justin Barcia claimed the first overall win for the GasGas manufacturer in the 450 class, Michael Mosiman put 3-2 scores together to stand second overall in the 250 class just an hour later. For Mosiman, it was a big step in the right direction after missing some time with an injury at the third round of the season and coming back just two rounds ago at RedBud. Now with two solid motos and a career best finish under his belt, Mosiman eyes continued success into the second half and he spoke with the media after the race via Zoom about his satisfying day at the races.

Michael, a career-best day for you. Second overall is the best of your career. Your second-place finish in that final moto was the best moto finish for you. A big day all in all for the GasGas team. You’ve been obviously there all season long. You’ve been arguably the third or fourth fastest guy, fifth fastest guy. You’ve been in that top-five group all season long, just some other things have kind of gotten in the way of your results and haven’t really shown what your speed has been. How does it feel to finally put it all together today and get on the box? How are you feeling with the momentum you now have moving forward?
Michael Mosiman: I feel good. I think I’ve known it for a little bit now, but to not see it on the weekends and to have various issues going, to really just get my feet under me again is really nice. It’s kind of a bummer that this is a career first to get a second place in an outdoor moto. I feel like I should have got that by now. But we’ll celebrate and go grab some cookies or something. I’m excited. I think it definitely gives me confidence and motivation. Washougal is one of my favorite tracks, as well as Spring Creek, so I’m looking forward to it.

On the podium today you looked great. Wil Hahn joins the team, and we see you on the podium. Is it a coincidence, or is there a little bit more to it? How has it been since Wil has joined your program?
Actually, I did not train with Wil this past week. We had talked about making the switch, but I was still in Florida and the team said, “No. You’re in Florida. You’re with Aldon [Baker]. Train with Aldon.” So, he’s been there helping on the weekends. I think he adds a lot to the team. To me, I think just from a mental standpoint to have someone who has raced who understands and who is able to address those things and isn’t just telling you how to do it but has never done it before. Somebody who can understand and communicate well. I think it has definitely had an effect, just working on the weekends. But I’m going to California and going to start working with him this week. So, we’ll see if we can keep it going. I’m looking forward to it.

You mentioned you were working with Aldon a little bit. How is it working down there with him? Have you spent much time down there?
Yeah. I’ve been working with Aldon for the past four years or something. I was I think 17, 18 when I moved right after my rookie year, and I’ve been based down at the Bakers Factory for quite some time now. It’s actually going to be a big move for me getting out of what I’ve been used to. The team has got Wil and they have a lot of faith in him. It’s been good working with Aldon. He demands respect, and because of that, when he gives you a compliment it means something and when he gives criticism it means something. It has definitely been important in my career to have that base. Those guys do probably more riding than anyone. We joke around there it’s like boot camp never ended. It just keeps going through the season. He’s definitely helped me a lot throughout the years. I’m also looking forward to a change.

Just going back with what you were saying about Baker’s Factory, I’m just interested whether you as a rider, is the morale different now that there’s so many of these riders that are currently leaving Bakers Factory and going after different programs? Is it still the same feeling as it was when you first started there? What are the motivating factors of wanting that change? What’s causing that in your head to go, let’s go back to California?
It’s not so much me wanting the change. I do welcome it, but it’s been led primarily by my team, and they’ve had a good relationship with Wil for a while. The morale and all that, it kind of ebbs and flows. It’s not exactly one thing at any given point, with a couple guys leaving. I think I would be there if it wasn’t for just some of these team things. But I welcome it, too. I look forward to a change. I’m excited. I think one thing that can get tough is when you’re doing the same thing for years and you’re going through the motions. At some point, you just need something fresh to shake it up. It can affect motivation like the day-to-day. I’ve been doing this, and I’ve been doing this, and I’ve been doing this. I think there are a few guys that are feeling that, just being there for a while and maybe looking for a type of change. It’s a good program. It’s a winning program. Look at the statistics. It’s kind of insane. Aldon is never going to run out of guys that are willing and eager to follow him anywhere. Who knows? I might end up being back there.

We saw you start the season strong there at Fox Raceway and you had to sit out that round [High Point], and now back and on the podium here at Spring Creek. Is this an opportunity for you to essentially press restart on your season and really try and get some consistency in the second half?
Totally. Starting out the season with the best I ever had, I think I went 4-4 or something for fourth. I was really close to getting third. I think I made one mistake at one point. I was in position. I felt good. Had good speed. Confidence was high. Then had some bike issues at Thunder Valley. I came from like 18th to fourth and I was catching third. I had a lot of good things going on at Thunder Valley, but it didn’t show up. It was like, “Mosiman, what’s going on with him? He got tenth.” It’s like, “No, I nursed the bike.” Talking about bike issues, it’s a sensitive thing with the team. It’s a complex thing. It’s not just like GasGas has issues. That’s not the case. I think we sorted it out now. Absolutely in the second half of the year I’m just looking forward to putting some consistency together. I’ve got nothing to lose. I don’t even keep track of points anymore. I’m just out there to have fun and try to battle with these guys and try to win some races and really build on them for a good push next year to win a supercross title, a motocross title. I think I’m in a good place. Just signed a two-year deal and they’re expecting me to win. To get the momentum for this season is really a lot for the next.