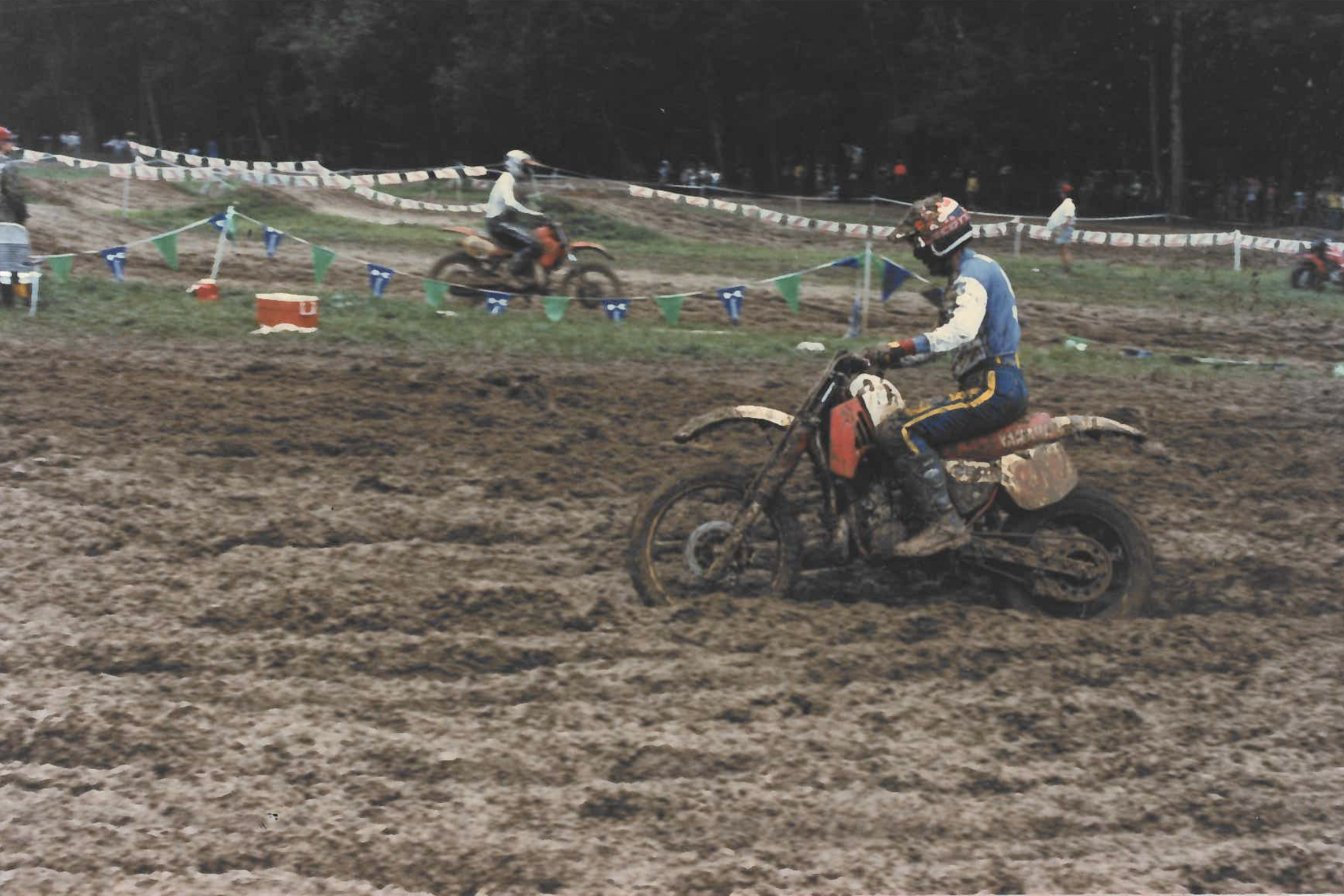 A never-ending storyline that surrounds every AMA Amateur National Championship week at Loretta Lynn’s is the weather. Central Tennessee in late July and early August almost always means hot days, cool nights, and the occasional cloudburst (or two or three). The humidity and the fact that it’s hurricane season along the East Coast and Gulf Coast can send some very big, wet surprises our way, altering not only the racetrack but the race itself. If you’ve raced at Loretta Lynn’s more than once or twice, you have almost certainly had a moto when it’s a downright mudder out there.

That said, no race in the 40-year history of Loretta Lynn’s was more affected by the weather than the 1985 AMA Amateur National Motocross Championship. This was the year a major storm known as Hurricane Danny came up from the Gulf of Mexico. The ’85 race was later than usual—August 14–18—and that put it right in the path of the brewing storm, which had a peak intensity of winds of 90 mph. As far as hurricanes go, it wasn’t a particularly bad one, nor did it do a great deal of damage—that is, unless you were in Kentwood, Louisiana, where it made landfall late on August 16. In Kentwood, the home of Loretta Lynn’s alumni Wendall Simmons, as well as his close friend and regular Loretta Lynn’s visitor Jamie Spears, 8.9” of rain swamped the small town.

From Kentwood, Hurricane Danny followed the path of Simmons and Spears right to Loretta Lynn’s Ranch. The storm hit late in the week, after most of the 26 classes that year had completed their first of three motos. What started out as a dry, warm motocross race turned into that full-blown mudder we always fear. The second set of motos saw the track slowly but surely turn into a quagmire, with huge puddles and deep ruts forming. By the time everyone got two motos in, the bottom had fallen out of the track, and a break was called after every class had gotten a second moto in on Thursday.

Come Friday morning, Big Dave (who was riding the Senior +40 class) tried to salvage the third set of motos by laying out an alternate track on the water-truck lanes and infields that still had a hard base under them, though they were mostly ankle-deep in rainwater. He even went out and rode a sighting lap for everyone to see what he hoped would suffice for the last set. Of course he was a woods racer and loved wet, muddy conditions—but this was ridiculous. Finally, after a group of industry friends and fellow parents were asked what might be done as Hurricane Danny kept the rain coming, the decision was made to pull the plug on the event after two motos and just count that for the overall. What had started as an absolutely perfect summer race had turned into an impassible mud bog. (A similar decision to end the event after two motos would be made in 1995 when a days-long storm hit the Ranch late in the week.)

But across the board it seems like the 1985 AMA Amateur National Champions were the right folks to take home the biggest trophies, as they had proven that they could win in both wet and dry conditions. They included Michigan Mafia members like Jeff Stanton, Todd DeHoop, Jeff Curry, and Lisa Akin; Californians Tyson Vohland, Jeff Matiasevich, and Frankie Brundage; future stars like Damon Bradshaw and Donny Schmit; and super-fast kids like Indiana’s Mark Melton, Idaho’s Lowell Thomson, and South Carolina’s Hank Moree Jr. There was also a couple of tried and true mudders who took titles, like Kentucky’s Tommy Watts and my big brother, Tim Coombs. As for Big Dave, in his one and only time racing motocross at the Ranch, he finished fourth overall.

That Friday night, as the trophy presentation was going on under the pavilion, Hurricane Danny showed up in full force, tearing banners off the stage, knocking down trophies, and nearly blowing the roof off the place. It was scary, but it was also pretty damn cool. What a way to end a championship week!

Check out this gallery of some of the familiar faces that participated in the 1985 AMA Amateur National Motocross Championship at Loretta Lynn’s Ranch.