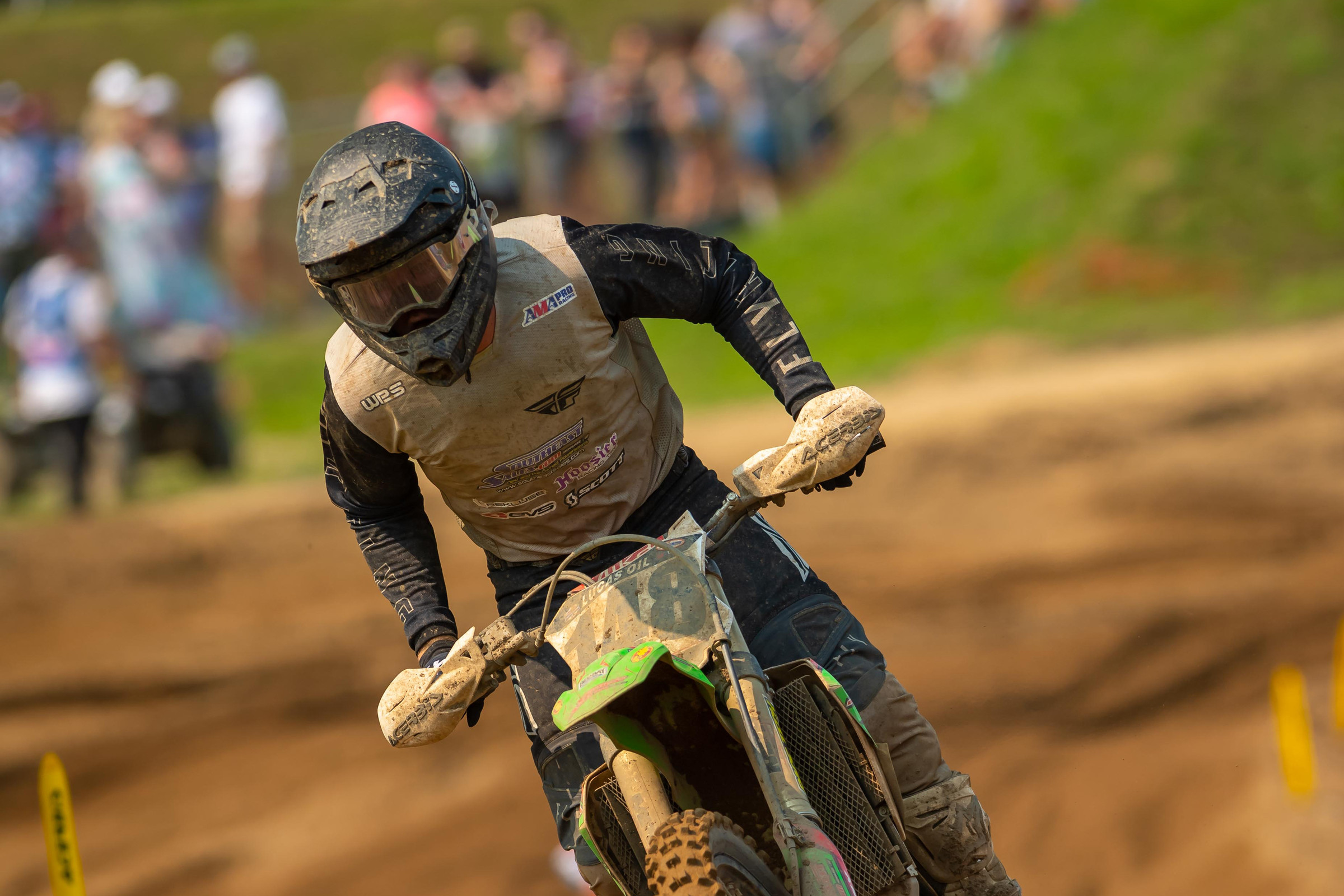 We caught this part in Adam Cianciarulo’s post-race interview with Steve Matthes: “I don’t know who it was, I had a nice battle for 23rd,” said Cianciarulo. “I gave him knucks after the finish.”

Cianciarulo crashed hard on the first lap of the RedBud National’s second moto, and his Kawasaki was mangled after that. You could literally see his front fender pointed down and touching his front tire. His front brake lever was down and his clutch lever was up. He was not getting back up to his normal speed, he was going a lap down and probably not going to score points, but he refused to pull off, and along the way he got into a good battle with a privateer for 23rd. That privateer was Bryce Hansen. Sounded like a cool story, so we called Hansen to get his side.

Racer X: Bryce, what’s up? What are you doing?
Bryce Hansen: Just got off of work. I’ve been doing some manual labor this summer, some electrician stuff, cutting through piping for a company in Milwaukee.

Oh man, don’t get electrocuted!
That’s not part of the plan. [Laughs]

Fill us in on your background, as far as your road to turning pro, and generally just who you are.
I live in Kaukauna, Wisconsin, which is about half an hour south of Green Bay, which is probably the only place people know from Wisconsin! My father raced snowmobiles when he was younger, and I have an older brother who races. When I was really young it was just what I loved to do. I got onto a little Honda 50 when I was four, which is when I started riding. I could ride that bike before I could ride a pedal bike, so my mom made me stop riding for a little bit. I had to learn how to ride a pedal bike before I could race. After I started racing we realized I was faster than most of the people locally so we decided to try out Loretta’s. I did pretty good and we decided to start doing some national stuff. I won on 65s at Mini Os, and I’ve been going to Loretta’s pretty much every year since 2008. I went there last year in College Boy and Open Pro Sport. I got second in College Boy, I was hoping for first, but I didn’t get it.

I decided to do RedBud as my first pro national last year, and it went quite a bit better than expected, to be honest. I actually didn’t know what to expect, with qualifying and everything, it’s quite a bit different than amateurs. I did Millville the following weekend and ended up getting hurt. I got compartment syndrome in my leg and ended up having to get surgery. I was out for like six months. But I’m back into it now and racing again.

So this is your first real outdoor season then?
Yeah, it is.

Are you doing all of them?
For the most part, but we’ll see. Being on your own and paying for all your travel, it’s kind of hard to go everywhere. I’m trying to decide right now if I’m still going to go to Southwick. It’s hard to get off work and get out there on your own.

You privateers man, I really don’t understand you guys have jobs and make it to the races. I don’t understand it.
It’s difficult. I’m still trying to decide what I’m going to do. I’m still a fulltime student in college, too. I got out from that in March, but before that I couldn’t even really ride.

What are you majoring in?
I just wrapped my up second year and I want to go into something medical. But everything medical is so specific with majors you get stuck on whatever path you choose. So I’m not sure yet.

I was checking your Instagram before I called you and saw RedBud is the best you’ve ever done in a moto, the second moto. Talk about that.
Well it was kind of a love-hate kind of thing. My goal is to get a top 20 finish this year. I had a terrible first moto, but the second moto I felt pretty good. I got tired in the middle of it, but kind of regained my stamina at the end. I caught quite a few people at the end of the moto, but I was so close to getting into that top 20 at the end. I was right behind the last two people I needed to pass. If I’d of had a couple more laps I think I could have gotten a top 20. I’m still happy with 22nd, but being right there was tough.

Yeah, scoring points at a national is a big deal, not a lot of people can say they’ve done that. You also had a battle with Adam Cianciarulo in that moto, right?
[Laughs] Yeah, he lost his clutch I heard, but it was still fun to ride with him. I thought I was getting lapped by him, but he stayed right in front of me and I wasn’t quite sure what was happening. Then we went back and forth a few times and he finished right behind me. All the way to the end on the last lap we were battling. I wasn’t quite sure what had happened with him, but I found out after. But it was just really cool to ride with him.

I’m sure you probably had a “Holy shit” moment when you were battling with him at first, but did your competitive spirit ever take over and make you want to beat him?
Oh, for sure. I was going slow for a few laps and then he passed me. But he was kind of staying there, and it was like, “I’m going to stay with him until the end of the moto, I can’t let him get away.” It boosted my lap times back up to where they needed to be, it gave me energy. We gave each other some knucks’ after the moto and said, “Good ride.”

That’s really cool. So, looking forward to the rest of the season, you’re undecided on Southwick, but what about all the other ones?
I’m going to do Millville and Ironman for sure because they’re pretty close to Wisconsin. Unadilla and Budds Creek, I want to do them because they seem like they’re really cool tracks, but they’re still 15 hours away so we’ll see. It’s a lot to travel there, money wise. Hangtown and Washougal are like a day-and-a-half of driving, so I don’t know.

So the goal at the nationals you do race is to score points?
I want to be able to consistently get in the top 20. I feel like it’s totally a doable goal for myself. I haven’t had much time on the bike because of school and work and I’m improving at pretty much every race and racing myself back into shape. When I was at Thunder Valley it was the second time racing in eight months and I was so nervous on the line. My heart rate was spiked, but every race I’ve been to so far since has been getting me back in it and getting used to what it’s like to be on the gate with all these guys.