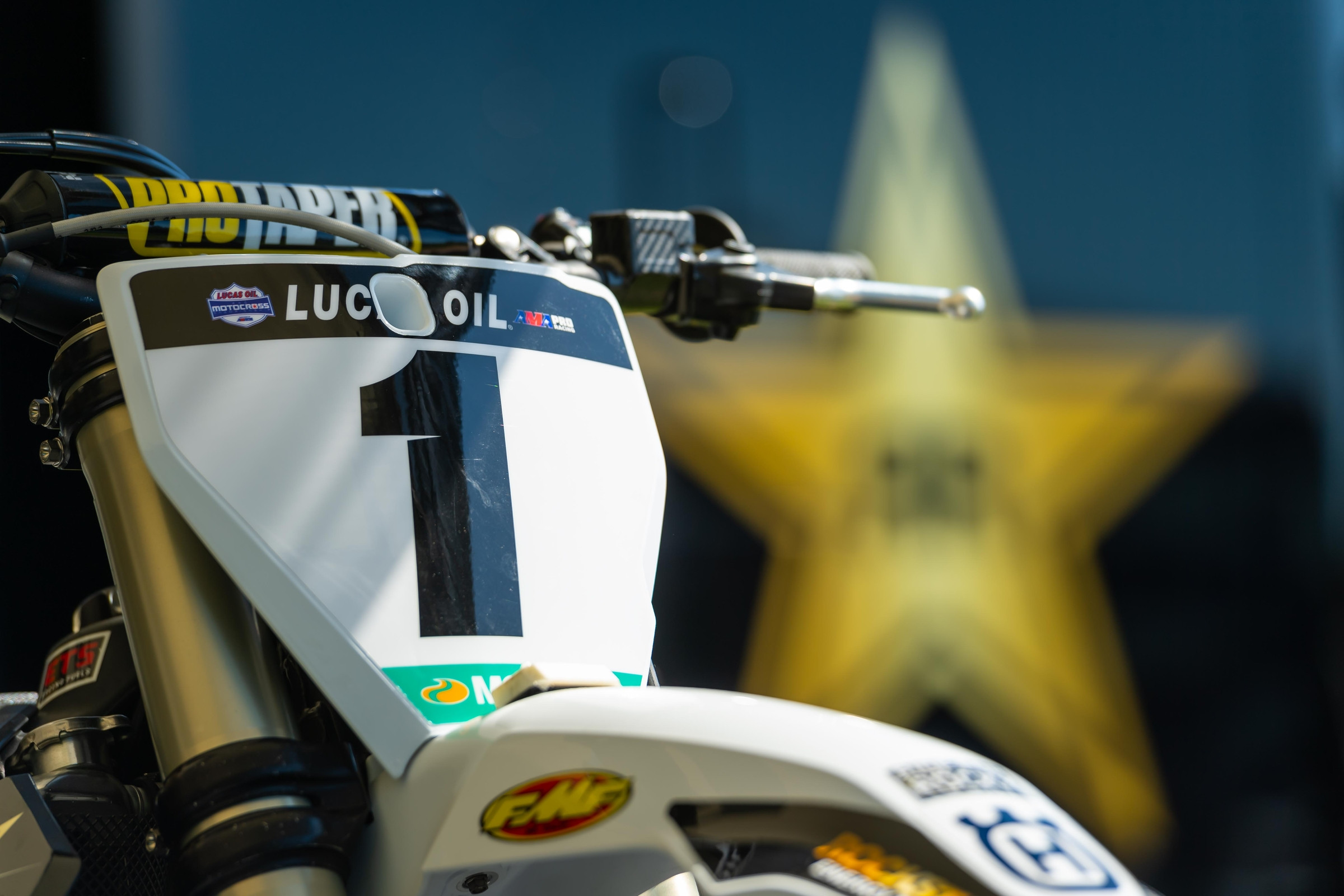 As you know by now, 2020 Lucas Oil AMA Pro Motocross Championship 450 Class Champion Zach Osborne has already had to abandon his title defense due to a lingering back problem that forced him out of the second round (Thunder Valley National) of the 12-race series. This was the second time that the Rockstar Energy Husqvarna rider had to vacate a crown early, as in 2018 his 250 Class AMA Pro Motocross title defense began with a dominant win at the opener but at the third round, he crashed off the start at Thunder Valley and tore the labrum in his shoulder. Osborne has certainly been unlucky (especially at Thunder Valley) but he’s not the only rider in SX/MX history to have a really bad go of an AMA title defense. Here are some other examples of disastrous title defenses, in no particular order. If we miss any that you recall, please add them in the comments below.

In 2019, 2018 450SX Champion Jason Anderson took to the gates for the Anaheim 1 Supercross with his new #1 plate, backed with red backgrounds. But Anderson’s night at the opener—and eventual season—was not what he hoped for. After starting the main event right behind his brandmate Dean Wilson, Anderson eventually finished in 14th—without crashing. At the second round, following a restart when Malcolm Stewart crashed in the whoops, Anderson took off after race leader Ken Roczen. Anderson made a pass for the lead and Roczen went down, as it looked Anderson would grab the race win. But he would get caught and passed by Blake Baggett, who earned his first career 450SX main event win instead of the #1. Although Anderson finished second, his day was much better than at the opener. At the third round, Anderson seemed to be off-pace again, finishing ninth. Through three rounds, he was seventh in points with a 17-point deficit to championship-leading Roczen with 14 more rounds to go. But unfortunately, that was not the case. Prior to the fourth round in Oakland, Anderson suffered a crash during practice where he broke his arm in two places and also sustained a fractured rib. The injury required surgery and kept him out for the remainder of his title defense. He would come back for Pro Motocross and put together a fourth-place finish in 450 Class standings and was eventually picked for the FIM Motocross of Nations team with teammate Zach Osborne (who missed a significant amount of his rookie 450SX season with injury) and Monster Energy/Star Yamaha Racing’s Justin Cooper as the 250 rider.

In 2011 Dean Wilson, the friendly Scotsman-turned-Canadian-turned-Californian won the 250 Class AMA Pro Motocross Championship, but he suffered a shoulder injury late in the ’12 AMA Supercross championship. The Monster Energy/Pro Circuit Kawasaki rider could barely test before the start of the outdoors. He showed up at the Hangtown Motocross Classic opener anyway aboard the #1 KX250F, tried to race but just couldn’t hang on. His title defense ended after riding one-half of the first moto of the first race of the series.

Sixteen-year-old James Stewart won 10 out of 12 rounds of the 2002 AMA 250 Pro Motocross Championship, easily the best rookie season in AMA motocross history. He was the heavy favorite for 2003, but then he cartwheeled spectacularly at the 125SX East/West Shootout in Las Vegas and suffered a broken collarbone. He would miss the first four rounds of the outdoor series, pretty much ending his hopes of a successful title defense before they ever started. He returned at Budds Creek, unveiled the “scrub” and won every moto for the rest of the 11-race series (Kenworthy’s in Ohio was canceled due to flooding). Stewart would have easily won the title had he simply been there from the start, as he was only 30 points behind the champion Grant Langston when the series ended; had he won the first four rounds like he did the rest, Stewart would have won by some 200 points.

Speaking of Langston, the color commentator for NBC had a Hall of Fame career of his own, winning an FIM 125cc World Championship, two AMA 125 titles, as well as the 2007 AMA 450 Class Pro Motocross title. But before he ever got to wear the #1 plate in 2008, he was out with an ongoing vision problem in one eye that turned out to be cancer. It would eventually end his career, and Langston never got to ride with the #1 plate. Doctors were at least able to save the eye and eradicate his cancer.

It’s easy to point at Jeremy McGrath’s ’97 AMA Supercross title defense as the only real blemish of his remarkable career. Sure, he finished second on the Suzuki RM250 he decided to race instead of sticking with Honda after four straight titles and a record haul of wins. But MC went from winning 14 races in ’96 to winning just two in ’97; one year later he was on a Yamaha and back on top for the next three titles. The ’97 title defense was a disaster because, had he not gone to Suzuki, he might have won eight AMA Supercross Championships in a row!

Of course, it was Jeff Emig who beat McGrath for that ’97 title aboard his Kawasaki KX250, but his career would go off the rails the following year during his own disastrous title defense. He would not win a single race on that ’98 SX tour, and even take a mid-season break to try to figure out what was wrong inside his head. Emig would only finish 12th in the final SX rankings, and then also lose his 250 AMA Pro Motocross title with an uneven effort that started off horribly (14th at Glen Helen) and then got much better (three wins in a row that summer) and then end with a broken thumb. 1998 was definitely a rough year for Fro.

In 1982 “Bad” Brad Lackey became the first American to win an FIM World Motocross Championship, guiding his Suzuki to the championship after a 10-year crusade in Europe. But then before the ’83 season Suzuki decided to no longer support Lackey, or really any kind of 500cc GP effort, and left the veteran on the open market. When there were no takers, Lackey decided to just go home to California. He would ride exactly one race—the 500cc USGP at Carlsbad—aboard a privateer Yamaha sponsored by Fox Racing. He would go 6-7 in his only ride with the #1 plate.

Nineteen eighty-three was bad for Lackey, but it was much worse for Team Honda’s two AMA champions, Donnie Hansen (SX and 250 MX) and Darrell Shultz (500 MX). Hansen would suffer a concussion while practicing in Europe for the Trophee and Motocross des Nations, an injury that would turn out to be career-ending. And Shultz, who gutted out a torn-up knee and a collapsed lung to narrowly win the ’82 500cc title, he would also retire without ever racing with that #1 plate, so there were no title defenses for any of Honda’s three #1 plates. Fortunately, new stars would emerge as David Bailey would win the ’83 SX and 250 MX titles while Johnny O’Mara would win the 125 MX title.

Let’s list some of the other vacated titles due to injury out here: There was Bob Hannah’s water-skiing crash that knocked him out of defending his 250 MX and SX titles in 1980, David Bailey’s ’86 500 MX title defense was dashed after he suffered a spinal injury in January ’87, Ricky Carmichael’s ’01, ’02 and ’03 AMA Supercross title streak that came to an end when he had to sit out the ’04 SX tour with a knee injury, Ryan Villopoto’s knee injury at the end of the ’12 SX season cost him his outdoor 450 title defense, and don’t forget that Gary Jones’ three-year reign atop the 250 MX class (’72-’74) came to an end with a knee injury at Daytona that knocked him out of the rest of 1975…

Also, there have been plenty of titles that were simply left undefended due to riders moving up a class, just like Dylan Ferrandis right now in the 450 Class, rather than wearing #1 in the 250 Class. That’s just one of many examples. And don’t forget that ’72 AMA 500 Pro Motocross Champion Brad Lackey and 2011-’14 AMA Supercross Champion Ryan Villopoto both left #1 plates here in America to go give the FIM Motocross World Championship circuit a go.

Finally, there’s more James Stewart. After winning literally every moto of the 2008 AMA/Chevy Trucks Pro Motocross Championship, Stewart left Team Kawasaki and decided go SX-only for the next few seasons, so he didn’t line up to defend his MX title defense in 2009. But James did win the AMA Supercross title in 2009 aboard a San Manuel Band of Mission Indians Yamaha after a bitter battle with Chad Reed. Stewart would begin the defense of that title with a win at the ’10 opener at Anaheim, but then after the third round he was done, in need of surgery on his wrist. That wasn’t quite as bad as what happened in 2008. James, the defending champion, was tied for the points lead in the SX series with Reed after two rounds when he showed up at Anaheim 2 and asked the media to come to the Kawasaki rig. Inside he announced that he had a knee injury and would be dropping out of the series for surgery.

In a class all himself is Mike LaRocco. The Kawasaki rider won the 1993 AMA 500cc Pro Motocross title, but then found himself a champion without a class in 1994 as the AMA disbanded the 500 Nationals! Instead, LaRocco would win the '94 250 Pro Motocross Championship, so it was a successful season anyway! That last #1 Kawasaki KX500 is in the Kawasaki lobby museum at their U.S. HQ in Irvine, California.

Okay, we surely missed a few along the way. Which other title defenses do you recall as being particular unfortunate?