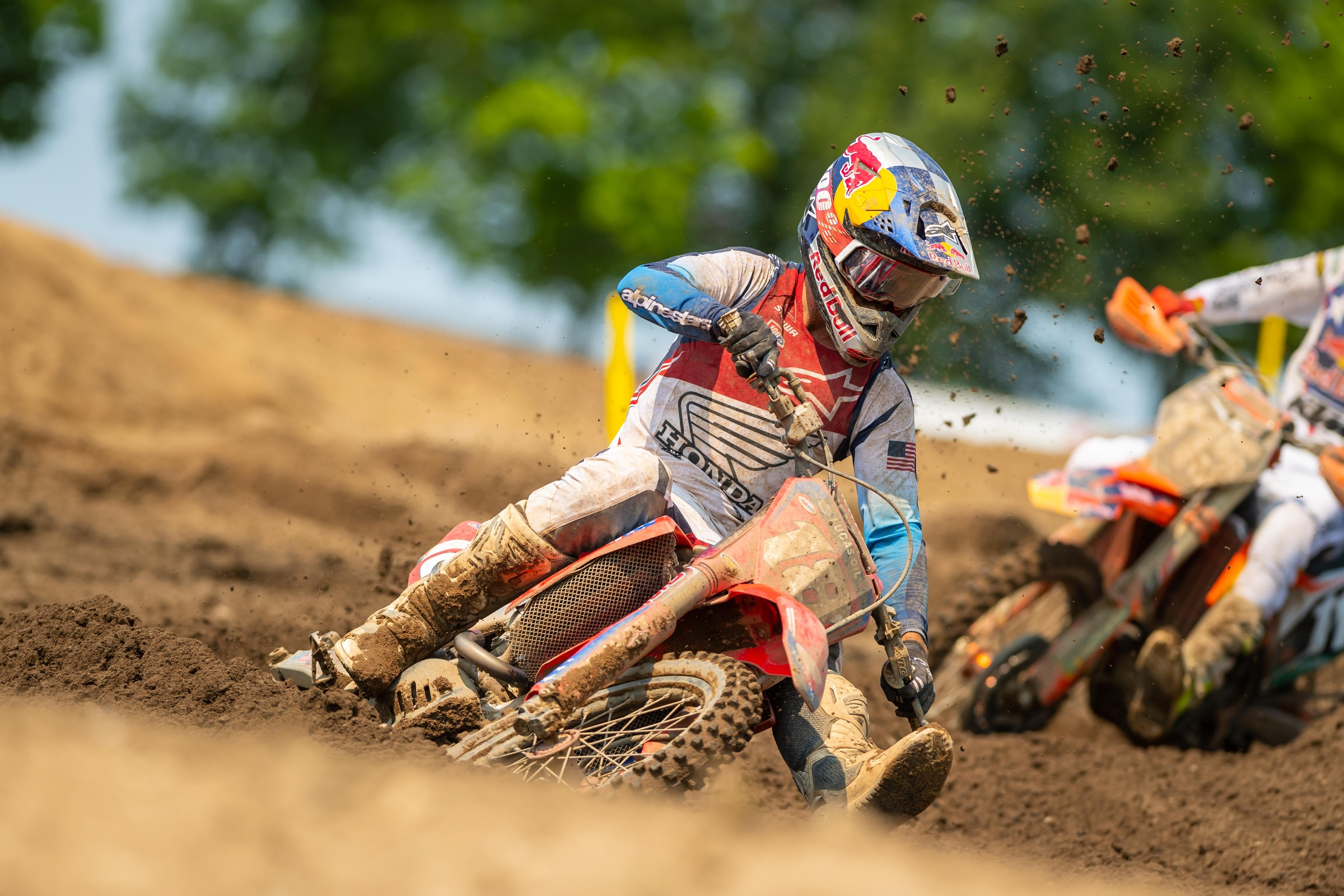 Honda HRC’s Jett Lawrence won the first moto of the day at RedBud…but then lamented that his bike setup was off, leaving him powerless to stop RJ Hampshire. Luckily for Lawrence, Hampshire crashed twice, so he held on to win the moto anyway.
His moto two was spoiled by a bad start and an early crash, but he came from outside the top 30 to salvage sixth. The 1-6 put him on the podium (third overall) and prevented Justin Cooper from making up much ground in the series. Lawrence spoke with the media after the event.

Jett, moto one you got the win but you weren’t happy with the riding and the bike setup. Then moto two you had that massive charge from behind. Safe to say a pretty tough day in the office for you, but you’ll take third overall for the day?
Jett Lawrence: Yeah. The bike setting in the first one just wasn’t good at all. I couldn’t charge at all, like RJ, he was charging. If he caught me I didn’t really have any ammo to fight because the bike was just handling terrible. I felt like if I went and pushed I would have KO’d myself somewhere. So, I was pretty limited in that one. The second one we fixed the bike. The bike was working way better, but just didn’t give myself a very good run at all with winning or even getting into a podium position. But I came from 37th to sixth, so I think that’s pretty good. I think I made definitely a lot of passes, maybe the most passes of the day. I think if you look at the result, yeah, it sucks. I lost three points, but you’ve got to look at the positive. It was a strong ride, I felt like, and there’s many other people I feel like in this class that could do that.

How are you feeling with the tracks? Are you at a point where you feel there’s still a lot of changes or improvements to make, or do you feel like you’re pretty much settings-wise where you’re going to be?
The bike handles good, but you can always improve it. I’m always changing settings. I have my main base, but I’m always trying to find more improvement in my suspension, bike, myself. With all these different tracks we’re always making tinkers to the suspension and the setting.

Tell us about the strategy when you’re making those moves in the early laps. Just how critical is it to climb up the field as far as you can when the riders are still tight together?
Yeah. It’s risky because you can make up a lot of positions because people are so close. They’re trying to pass, they make mistakes. So, it’s risky. Sometimes you get really lucky and you can make a lot of passes. Other times it can cost you by making a decision just with a click [instant], basically. Just one wrong decision could basically save you from going from making up three passes to going back 16 positions. So, that first few laps I tried my best coming through. It wasn’t too bad, but the third or fourth lap, I think that’s when I went down. That’s when it all went downhill.

On the track prep in general, we’ve been talking about that a lot lately. This year the tracks seem to be a lot more racey, not as Steve Matthes calls “slot cross.” So, do you like the track prep the way it has been?
It’s way better. Last year, no offense, but it was terrible. Every track was basically a slot car track. The lines were terrible. They all went straight to the turn. Everyone goes straight to the turn. It gets so deep and muddy no one could do anything. You can’t open up turns. You can’t do racecar lines and that stuff. This year it has been a lot better with that, especially Colorado with not having many ruts there. That basically threw a spanner into the spokes because it caught everyone off guard. Normally that track is rutted and rough and it was like, oh. We had to go in and use a different skill compared to other tracks. So far, I’ve really liked the different conditions.