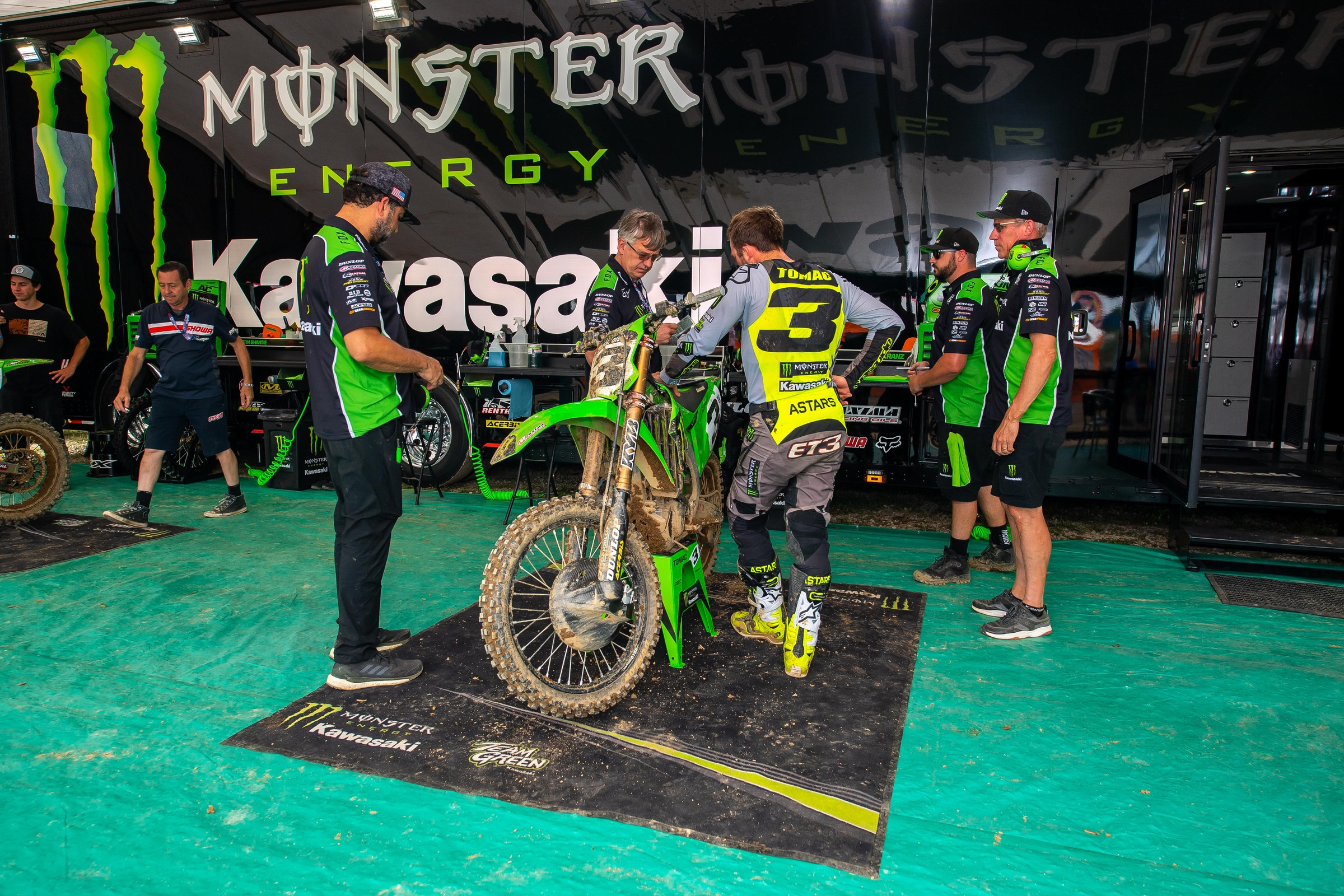 Then, all of a sudden, the championship-level Eli returned! He started better in moto two at High Point, tracked down his Monster Energy Kawasaki teammate Adam Cianciarulo for the lead, then took off for the moto win.

What changed? According to Eli, not much. Here’s what he had to say to the media in the post-race press conference.

Eli, did you just get mad and go out and get a win?
[Laughs] Oh, man. I kind of got mad and just went out and won. Put myself in a lot better track position early on. That really changed it for me. I just felt like I was behind in those other motos and was just not riding like myself at all, struggling with lines and kind of connecting that whole track. So, I don't know. Kind of flipped the switch. Another kind of a weird Eli Tomac, but that’s how it goes. I’m glad to win something.

Eli, that second moto, when you made that pass on Adam, it just looked like you went back to the Eli of old. You attacked that billboard corner there after that and you just kept going. Did it feel different moto two to the first five we’ve had so far this season?
Oh, totally. I was like a whole different guy. I don’t even really know why, other than like I said, just put myself in an early track position up there. I thought the track was really good this weekend. It was one of the best High Points, in my opinion, for moistening the track and just how it was prepped. I looked at it last night and was like, 'Dang, this track looks sweet,' and it turned out that way. It had some fun stuff on it, like that dozer berm you were talking about. The whole thing shaped up, in my opinion, in the right way between rough enough, technical enough, but not a total mess in the morning.

Eli, we talked a lot about the track this evening. Real technical, that downhill where you were hopping over the little hip jump. I didn’t see too many other people, at least on camera, doing that. Was that something that you had kind of worked out in practice? That was just a really cool line.
That line was after that big quad table. I did it once in the first moto, and I clipped my rear end on it the first moto and I kind of put it away. Then I looked at it again in moto two and the braking bump on it was more built up from the 250 guys, so it was a better lip getting over that. So, that was a cool line. That one and that other triple step-up beforehand I felt like were big for moto two.

Eli, you would be the first to admit the first two rounds sort of haven’t gone the way you would like them to go? A lot of people bring the words up – is there a panic button for Eli? There’s just so much talk about Eli not performing, and then we get people that come out with these wild conspiracy theories, guessing that maybe the good parts were being taken off of your bike, et cetera. How do you deal with that to be able to show up each weekend and just keep on a happy face and going after it and doing it, when really it doesn’t sound like you know what was going wrong with the first two rounds?
I could say round one I had a different setup on. I went to round one with something else suspension-wise and general chassis stuff. So that one I’m like, maybe we missed it. The second race, Colorado, I had what I had today. So I don't know what was going on. I was getting tight in those other motos so I don't know if I had something going on with my body that way, but now back to normal feeling. At least moto two today I could do what I wanted to do. With the conspiracy stuff, I think we’re all bigger, better people than that.

Eli, you talked a little bit about the frustration with the first two rounds as well, and obviously the first moto didn’t go perfectly as planned today either. So, that second moto, was it just kind of it all boiling over and you were riding on that angry aggression level to say, I’m sick of this? I just want to get it done?
Of course. My moto finishes have been very marginal, so that was in my mind. I’m like, I’ve got to do something, I’ve got to get back to normal. So, like I said before, it’s frustrating when you have those races like that and you’re digging yourself that big of a hole. But better to get back to normal sooner than later.