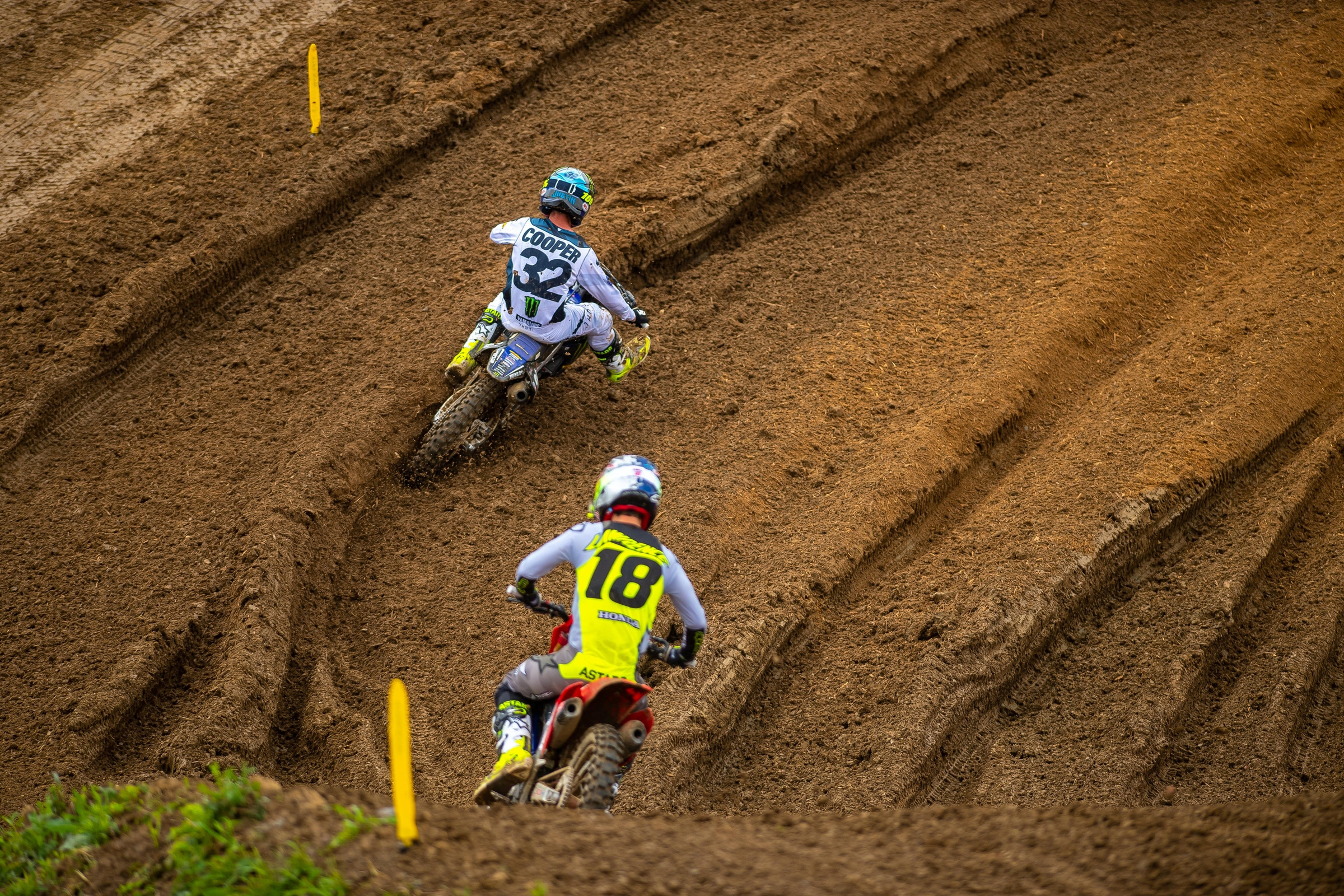 The High Point National provided some close racing throughout the field on Saturday, and Justin Cooper, Jett Lawrence, and Colt Nichols found themselves in plenty of them. All three found each other a bit in the first moto along with Jo Shimoda while Rockstar Energy Husqvarna teammates RJ Hampshire and Jalek Swoll held the lead spots. Eventually, Lawrence would go 3-2 for second overall ahead of Cooper who claimed 5-1 scores for third, with Nichols putting up 2-5 scores for fourth.

All three riders spoke with the media via Zoom about their days.

Jett, on the podium you talked about being behind Justin Cooper in the second moto and kind of realizing you maybe didn’t have the pace to run him down. How do you feel, in this second year, you’ve mentally developed to be able to kind of realize that, in the moto, where you could settle into a pace and take what’s given to you instead of kind of winging it for a win every time?
Jett Lawrence: We always have another eye on a rider, and obviously Cooper was out front. He had a bit of a gap. [I thought] It is possible if I can get some good lap times and maybe close that gap to at least put some pressure onto him. Each lap I just kept looking and looking once I got into second. I was taking some chunks out, but it wasn’t major. I was pushing quite a bit because he was on it in that second one and had a really good flow. I had a little bit of a flow but wasn’t the best. I was in a little bit of a weird spot. I was in no man’s land. The gap away was like, I could try and push it to get to him or I could relax and stay where I am. I ended up just playing the safe route and took second. At least I still gained some points on him [for the day], so I’m going to take second. If I try and keep pushing, I’m going to end up on the dirt. So, I ended up going with that decision. I felt like that was the right one this weekend.

First time at High Point for yourself. That first moto the rain sort of started coming down. It looked like the track was kind of greasy early on and then it sort of turned around at the end of the day. How did you find High Point for your first time?
It was a really sick track. It felt more like a Euro track with all the elevation. It was a tricky track, I felt like, especially with the rain. You had to find out what was slippery and what was tacky, especially with the sawdust they added in this week. It was a fun track, though. I really liked it. It just brought out a skill level that if you weren't on it and have your balance correct, it would be a nightmare. All around, it was a really cool track, I felt like.

Awesome competition today, giving away a jersey. I just want to know, what’s the craziest sign or the best sign you’ve actually seen today? Is that why you had Jacob [Hayes, who assisted Lawrence in checking out the signs] going around the track looking at these things, or were you getting DMs about it? How did you pick that?
There were some pretty wild signs out there today. I had Jacob [Hayes] out there today and Kayla [Mead, Honda PR] taking photos of the signs to make sure we get a really good one. There were some pretty cool ones. There were ones with LED lights, and some really crazy ones. It was really cool to see that. It was a hard pick to try and pick who should get the jersey, but we ended up coming to a decision with the one we went with today and I felt like that was a really good decision.

Justin, you had a little bit of a struggle there in the first moto. Can you break that moto down for us?
Justin Cooper: Yeah. The first moto I got a good start, and I was top three and just tucked the front end right before the finish and killed the bike. I picked it up quick, but from there it kind of unraveled and was kind of just eating roost the whole time. It was a much needed rebound in moto two, and I knew that. The first moto I’d like to forget a little bit, but at one point I had a good flow going and I just lost it. Put that one behind me and regrouped for the second one.

What was the difference between the two motos? The first moto was fifth. I'm sure you’re not happy with that. Then the second moto was probably your best of the season, so what changed there?
Not much, really. The same kind of thing. Just had a better flow going in the second one. Definitely going down doesn’t help anything. It took the wind out of my sails, in a way, and it took me a little bit to get going. I put it all out there in the second moto and rode like myself. I felt like I had a really good flow going, at least for the first half, and then once I got a gap it was kind of just managing it from there. I had a lot of fun out there and I was really enjoying the track. I felt like I was one with my bike, so that’s always important. Just definitely felt really comfortable in the second moto and just enjoyed it. That’s probably one of the first races I’ve enjoyed like that in a while.

Is that kind of the feeling you were looking for? You were happy to win last week, but you didn’t win a moto and I know you weren't happy with the way the riding, even at Pala. So, is this what you’ve been looking for, the second moto?
Yeah, for sure. The season is still young. We’ve got nine more rounds. It’s just about putting in good results right now. I felt like today was a good start to where we want to be. I just had a lot of fun riding today. The track was super fun. It got super tough. Like Jett said, there were a lot of lines that kind of formed, and the ruts kept you on your toes. They were definitely tricky all day. It was that much harder to balance on a track like this when you have off-cambers and all the elevation. I usually struggle here, so it’s definitely a good way to end this day.

Colt, much improved today. Anything that you worked on to make those improvements, or was it just better starts? What was it?
Colt Nichols: Yeah, overall, I think just better starts, honestly. I’ve been starting pretty much like 20th the first four motos. So, I worked on starts a lot this week and tried to work on some sprint speed because I seem to be pretty slow at the beginning of the motos. That second moto I was just kind of slow all the way around, so a little disappointed with that for sure. That was tough. But overall, it’s still progress so I’m happy about that but just a little frustrated with how that second moto went, getting myself in a good position and just having zero flow on that track. When you don’t have any flow, that track is pretty hard to ride. So, it was just quite a struggle, honestly. But at least the starts were better. I’ll take that positive from it and take that into RedBud and see if we can’t be a little better there. But yeah, mainly just starts and trying to get my speed up those first few laps.

You’re a supercross champion. You have a colorful history, coming from a privateer to now a contender at every supercross and motocross. What’s your expectation for this motocross season? Would anything less than a top-three position in the series be a disappointment, or do you see this as just growing and increasing your pedigree from the supercross championship?
Good question. Really kind of what you said. I feel like if I’m out of the top three I’d be a little disappointed in it. It was just tough. I expected that out of myself and then we went to the first race and I kind of just got kicked in the nuts, to be honest. I kind of forgot how fast-paced these races are and how rough and tough it got. It kind of took me by surprise, I think. Overall, I feel like I’m kind of coming into my own a little bit. It’s just building blocks, taking a little longer than I want. Overall, like I said, we made some progress today. Some progress is better than none, so we’ll move into RedBud, have a weekend off, try to work on some more things and try to come out swinging. I want to try to contend for these race wins and be up on the podium. That’s the ultimate goal for me. Getting there. One step closer, but overall, like I said, a little disappointed with the day but I’ll take some progress.