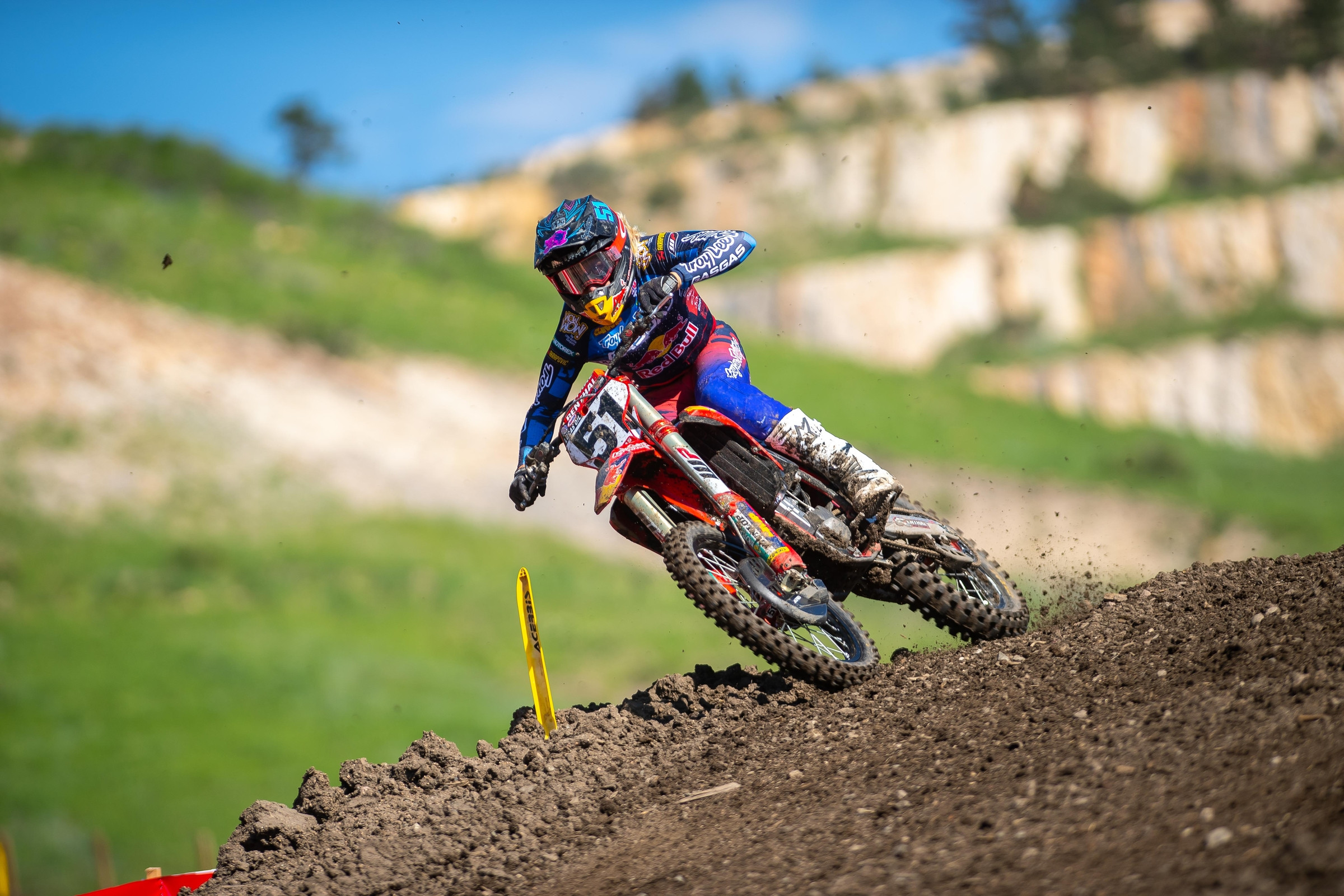 Between Barcia Battling Up Front

For the second race in a row, Justin Barcia narrowly missed the podium at the Thunder Valley National on Saturday. With 7-3 scores, he finished just one point behind Adam Cianciarulo to claim fourth overall on the day. But Barcia isn’t letting that get him down at all as his strong form in the first four motos of the season is more to hang his hat on than anything else. He spoke with the media after the race on Saturday about how he’s feeling on the bike and what hurdles he still faces in his first year with the Troy Lee Designs/Red Bull/GasGas Factory Racing team.

Racer X: You ended up just short of the podium two weeks in a row. You’re riding really well. Are you happy with that, or are you more bummed that these keep resulting in just missing the podium here these first two rounds?
Justin Barcia: Really happy with my riding. The bike is really good. We’ve been on the same setting, just a few tweaks here or there. Could have been better today, sure, but could I have been better today? Yes. So, it’s kind of like a team effort, for sure. I’m happy with the fourth, but I always expect a lot more out of myself. But like I said, these aren’t my favorite tracks. Pala definitely not my favorite, and today I’ve never been a great hard-pack rider, but I’ll be honest with you, I’m getting better. The steel frame definitely helps that a lot, so that was cool. But all in all, just keep plugging away. Getting close to the podium. I think it’s a long season and we’re going to keep working hard. Definitely enjoyed it, though. Eating a lot of roost with not good starts, so I think today would have been a lot different if I would have had some better starts. Just keep having fun.

Take me through late in that second moto. First, you had [Aaron] Plessinger dogging you for a long time. That was fun to watch. And then [Dylan] Ferrandis came up on you. Just take me through that second moto. You were in a fight for almost all of it.
I didn’t know that was AP behind me, but he hounded me so hard for it felt like at least 15 minutes. It was something else. I just had to ride my own race. I didn’t feel the best at the beginning, so I was just searching around. I got away from him. Kind of got on my own, gapped those guys a little behind me. Then Ferrandis those last couple laps just dropped the hammer. That’s usually kind of my style, so I was a little bit bummed on it just because I wanted to obviously finish the best I could that moto. But all in all, it was a good day. Those Yamaha boys are riding hard right now, so definitely need to stay on it.

Obviously, this is the first MX season we have here with GasGas. How has that been setting up the motorcycle? Obviously in the previous years there’s been no settings really to go off, but you look like you’ve transitioned really, really well into motocross, sort of better than you did when you were back on the Yamahas.
For sure. It’s been good. I’ve enjoyed it. Lots of work. We don’t have a test rider, so I do all my own testing. I really enjoy working with our crew chief, Rich, and all the mechanics and our suspension guy, Adam. He’s really, really good. He’s worked with a lot of past champions and stuff. So, it’s been enjoyable. It’s funny. All the testing we were doing before the season we were about a week out, and something was missing. I was happy. I could ride it, but I was like, just not really vibing it that much. There was just something missing. Pretty much the last day of riding before Pala, they just randomly brought out a setting. It wasn’t even planned or anything like that. I was super stoked because it worked really good. I’m super sensitive with front-end feel, so they found something that was plush but also held up. Pretty much every rider wants plush with hold-up as well, plush but stiff. They found something good for me. Like I said, it’s been enjoyable. I’m enjoying riding a lot right now. The team is cool. I look forward to a lot more good things.

How many messages did you get about a certain screenshot about a set of Troy Lee Designs gear that sort of surfaced on social media this weekend?
Are we allowed to say that word? I didn’t know. None of us knew. Our Red Bull and all that stuff covers that up. When I saw it, I was like, wow, how did none of us notice that? I was like, I don't know the designer that made it, but everyone on the team told me it was a full-on accident. But I’m like, no chance. Come on, guys. A group text started between Pierce [Brown] and [Michael] Mosiman was in it, and I was. They were like, “Did you guys see this?” I was like, “I don't know. I think next week we should do another surprise for the folks out there.” So hopefully they keep running with it and I think it’s hilarious. It’s not my favorite word to be on my gear, but let’s go with it.

You’ve been around a while now. I just had a question about qualifying practice. I was watching MotoGP and some of those guys in some of the practices they’re focused on finding a race pace instead of setting a hot lap. How much does that come into play for you as you kind of work your way through your late years in the 450 class?
Well, I think honesty is the best policy and I’ve been trash in qualifying in supercross and motocross. I don't know. Honestly, I don’t get stressed on it. The team knows me well enough now, working with them for not even a year now but I’m like, Guys, listen, when it comes race time, I’m going to hammer down. We got this. Don’t worry. The first practice, I think I saw Team Fried posted a video. I did a full-on wipeout the first lap and like Karate Kid that thing. Tore the bike up a little. The fast times came from that practice. That was a bummer, for sure. I’d like to be a better qualifier than I am. We’ll see. It’s funny. Me and AP, we’re kind of similar. We both don’t qualify that good, but we always throw down. So, I think hopefully with age I’ll keep getting better at qualifying. We’ll see.

Do you focus on the race setting or are you really just out there trying to set a fast one?
No, I definitely focus on my race setting. We made a little adjustment for second practice, and then I knew that would be a good setting for the race. First moto still felt a little off. We did a few other little things, and it was dope for the second moto and showed I had good speed and stuff. So, I always focus on the bigger picture for sure and I think all of us for the most part in this class would focus on that. I’ve heard rumors that some guys maybe get paid for fast lap times nowadays, but I definitely don’t. So, it definitely doesn’t affect my bank account or anything.