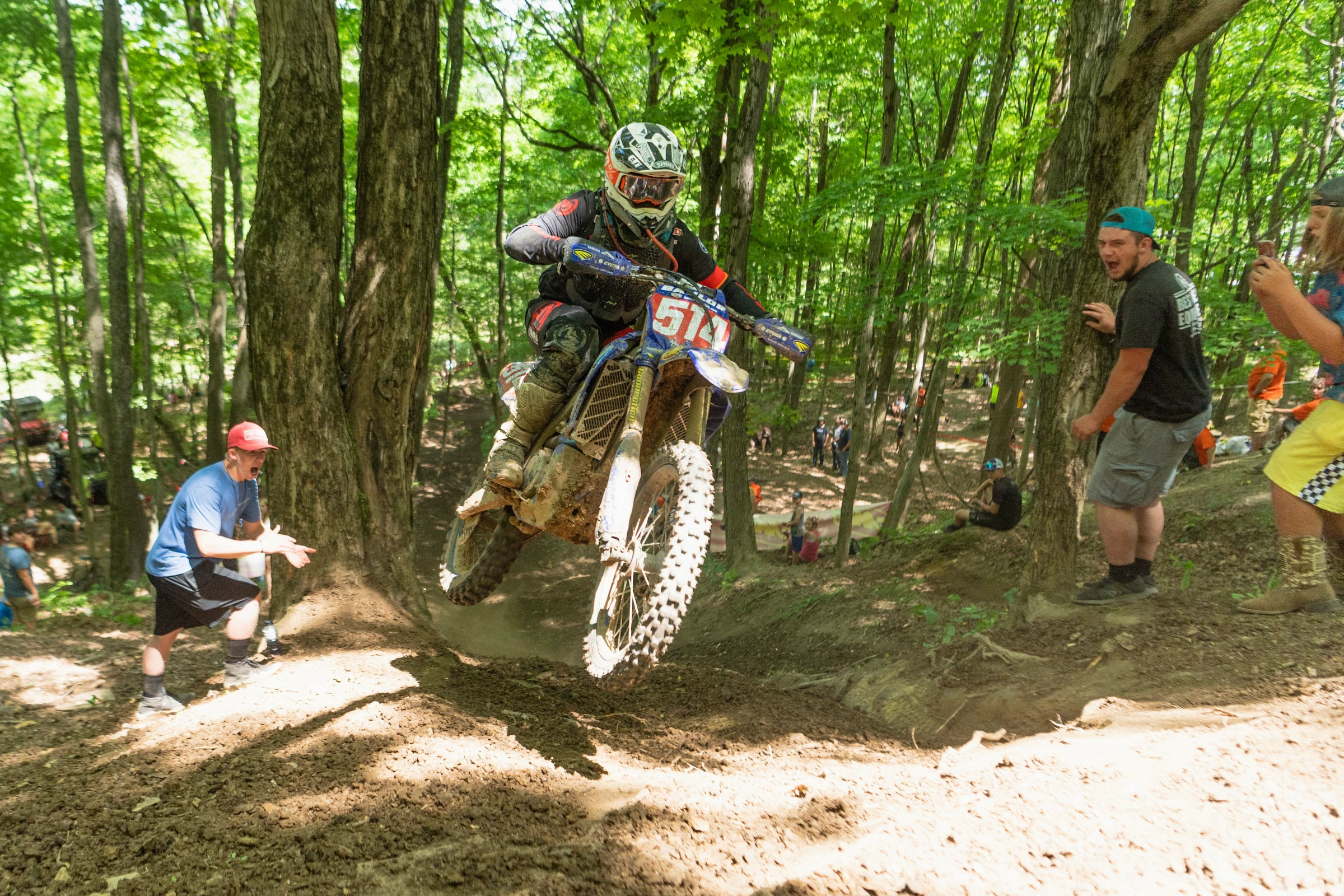 The John Penton GNCC stands as the oldest event currently on the GNCC schedule, with 2021 marking the 32nd annual running. With a long and storied history, the venue has seen its fair share of incredible races but even more so than that its reputation is highly defined by the weather and the conditions it creates, and that would yet again play a unique factor in this year’s event. Here are a few things we learned.

Named For A Legend

This event was born as the Burr Oaks GNCC back in 1990, but around 2001 the event was named to honor none other than John Penton himself. Many folks know the John Penton story, and it’s incredibly tough to sum Mr. Penton up in just a few sentences. However, if you’re unfamiliar with John’s story, we’ll run through it in an incredibly small nutshell:

John was an enduro racer back in the days when the events were completed on the big Triumph and BSA bikes of the 1950s. After attending the ISDE, John saw a real need for lightweight, off-road specific race bikes. He would eventually partner with an Austrian scooter and bicycle manufacturer to produce his own motorcycles, which were branded as Penton Motorcycles. That Austrian brand was KTM, and their lineage into the powerhouse we know them as today can be traced back to John Penton’s influence.

John also created the Hi-Point Products brand, which was the original go-to racing boot. The Hi-Point boots were born when John partnered with an Italian ski boot manufacturer to build these racing specific boots. The ski boot company he partnered with was called Alpinestars, and well, you know where they are today.

Alpinestars and KTM. Think about that! These are just two examples of John’s contributions to the sport, and it’s fitting to see why the event is named in John’s honor, especially considering it’s held in his home state of Ohio.

When you ask a GNCC regular about The John Penton GNCC, by and far the biggest thing you hear about is the weather. For many years, the event has seemed to be either incredibly dusty or incredibly muddy and more often it has been the latter of those two. The thick southern Ohio clay is almost like peanut butter when it’s wet, becoming one of slickest substances known to man.

However, this year was pretty unique. While the open areas did get a little bit dusty, the woods held a good amount of moisture in the dirt, which helped make some of the best conditions this facility has ever seen. A large number of the more than 1,800 racers who participated throughout the weekend seemed to say that these were the best conditions they’ve ever raced in at The John Penton, and some of those riders have participated in all 32 Penton events. It took that long to finally get that perfect combo!

What many people may not realize is that the regular GNCC track crew puts together the entire event, holds the race and tears it all back down in just one week. Despite what some seem to think, there really are only about four or five guys setting up the woods sections of these events. This doesn’t leave a whole lot of extra time or labor to put together on elaborate ISDE style grass track. With Hupp focused only on The Penton, he spent several weeks laying out, staking and marking a grass track that was more than one and a half miles in length! This really put a unique spin on The John Penton Section, and was a unique change for the GNCC regulars.

Australian Josh Strang didn’t grow up contesting the GNCC series as a kid, but is easily considered the savvy veteran of the XC1 class. Josh made his first GNCC appearances in 2006, trying his hand at the 250 A class at a couple of late season events. He would sign with the Factory Suzuki squad and begin contesting the series full-time in 2007. Minus one season racing out west after Suzuki suspended their off-road team, Strang has been a staple in the XC1 class ever since.

With more than 20 overall wins and the 2010 GNCC National Championship to his credit, Strang is easily one of the greats of the series. However, in 15 seasons of racing, had never won The John Penton GNCC. Interestingly enough, even when Strang spent the 2012 season out west, he still contested one GNCC event, which just so happened to be The John Penton. This year, Strang was finally able to break through and win The Penton, breaking a four-race winning streak by Steward Baylor.

Of course, this wasn’t necessarily a runaway win for Strang. Ricky Russell grabbed the holeshot led the first two laps of the race. Ben Kelley took over the lead on lap three and held it until the white flag on lap four. While Ricky and Ben were exchanging the lead, both Strang and Steward Baylor worked their way to the front with Baylor coming from fifth on the opening lap.

Baylor would eventually drop to sixth on the third lap due to a minor issue in the pits. When Baylor’s crew gassed the machine, a bit of stray fuel would find its way onto his pants. You can imagine exactly where that fuel ended up—in his lap—and anyone who has been soaked with a little gasoline knows how badly it burns and stings. Stu was forced to find some relief less than a mile out of the pits. He did so by literally laying down in some muddy water on the course! He would lose around a minute doing so.

Stu really seems to thrive when he’s faced with adversity and he would put on a late race charge. He was sixth with two laps remaining, then up to third but more than a minute behind second, to eventually finish the day in third and less than one second behind second place finisher, Ben Kelley! To top it off, the duo of Kelley and Baylor were just around six seconds behind Strang to make the spread from first to third just around seven seconds after more than three hours of racing!

With two rounds remaining until summer break, and just six rounds left in the entire season, Kelley still holds the overall points lead by just nine points over Baylor. Grant Baylor, the winner of the opening round, sits third, 31 points out of the lead. Unfortunately for Strang, while consistency is normally his calling card, he’s endured a crash-induced bike problem at one race, and then a mechanical issue at another, which has cost him dearly in the standings. After his win at The Penton, he now sits fourth in the standings, just four points behind Grant. Baylor, but over a full race out of the series lead.