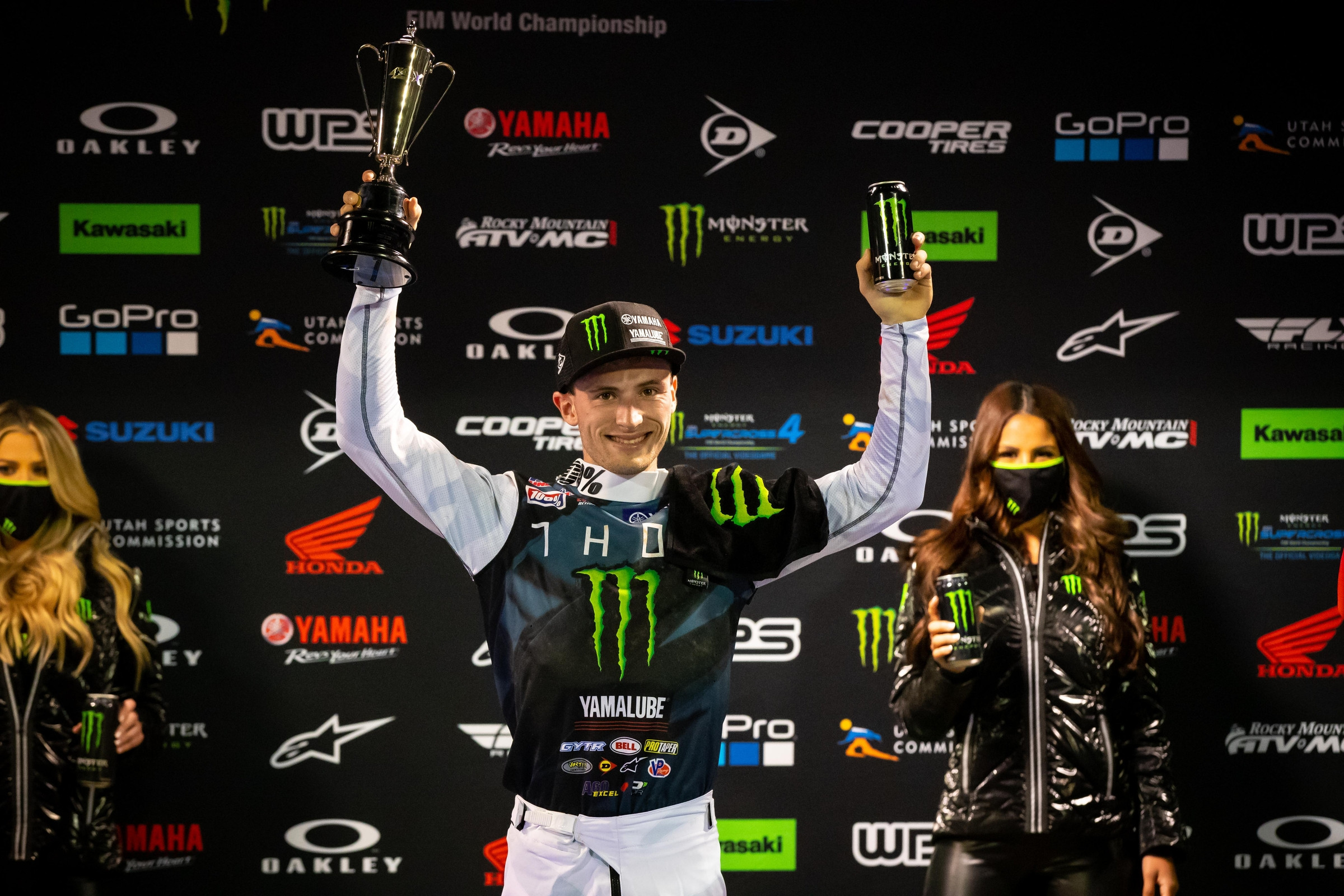 Justin Cooper’s amateur racing career was not like the factory riders around him. Growing up in Coldspring Harbor, New York, he was not able to train year round because of weather and he did not head south for winter training. He was not always sure whether he would make it as a professional racer so he finished a year of college after his public high school graduation. Then Cooper caught fire. He earned four total AMA Amateur National Motocross Championship titles at Loretta Lynn’s Ranch, but while his first two titles in the College and Two-Stroke classes didn’t really capture attention, his Open Pro Sport and 250 A titles in 2017 definitely did. He debuted as a pro with the CycleTrader.com/Rock River Yamaha team at the final rounds of the 2017 Lucas Oil AMA Pro Motocross Championship.

In his first pro race at the 2017 Unadilla National after Loretta’s, he recorded a 12th in the first moto and second in the second moto for fifth overall. That runner-up run in the second moto was impressive, but it was a muddy day, at his home race, and it was too quick to assure these results would be repeated. But now looking back, we can say that is exactly what has happened. Cooper’s results have been remarkably consistent since entering the pro ranks.

It started a little rough. Following his dabble in the pros with CycleTrader.com/Rock River Yamaha, the #62 lined up on the gates of Monster Energy AMA Supercross in 2018 as a member of the Yamalube/Star Racing Yamaha team. After ninth in his supercross debut, he crashed hard at round two. A concussion, nine broken ribs, and three broken transverse processes in his back resulted an extended amount of time off the bike. Soon, he was back in action for the start of Pro Motocross, picking up where he left off in 2017. After some “flying at the test track” hype the #62 Yamaha rattled off moto top-fives and podiums before translating those results into overall top-fives and overall podiums. Then came his first career moto win, at round three in Thunder Valley. At the fifth round in Tennessee a big get together early in the race with Jeremy Martin gave the New York native his worst moto finish to date, a 28th (this was the crash that nearly ended Martin’s career with a scary back injury). Cooper bounced back, claiming three more moto podiums and one overall podium before finishing his first full championship third in points to veteran Alex Martin and his Star Racing teammate Aaron Plessinger.

Come 2019, Cooper’s consistency continued. Once 250SX East Region championship leader Austin Forkner crashed out of the title fight with a knee injury, Cooper battled down to the finish with eventual champion Chase Sexton. He took second in points. The #32 carried that momentum into the summer, where he added more moto wins and the first overall win of his career to his resume before once again finishing third in the championship to Dylan Ferrandis and champion Adam Cianciarulo. He earned over 100 more points in his second full year than his first.

In 2020, Cooper came out swinging, winning the Anaheim 1 Supercross main event. He held the points lead for a few rounds and rattled off more podium finishes until the championship was postponed in March due to COVID-19. In April of 2020, Eric Johnson asked Cooper about his consistency and if he hears any of the talk surrounding his continually solid riding. Cooper said:

“Yeah, I’ve heard people call me the next Ryan Dungey because I’m so consistent. That’s good for me, but I don’t want to be a guy that is on the podium every weekend, I want to be a guy that’s going for the wins. I feel like my podium percentage is great, but I’ve only got two wins [one supercross main event and one Pro Motocross overall win] to show for that, so it’s a fine balance. I feel like I need to hang it out a little bit more to get up in the top spot and that’s maybe where I’ve lacked a little bit. I mean taking nothing away from the guys I race against, they’re all really good racers and it’s definitely hard to win, but it’s time to start stepping up to that number one spot.”

Not a dig at the former seven-time AMA champion, but Cooper meant he wasn’t happy just scoring podiums and points. He wanted to get on the top step of the podium more often.

It was rumored the New York native had a crash prior to the final few rounds of the supercross championship in Salt Lake City, Utah, and seemed slightly off-pace compared to early in the year, missing the podium in all three of his main event starts. For the second straight year, Cooper earned a handful of podiums before finished second in his region with 180 points.

When the Pro Motocross season got underway, he started off with a broken hand that hindered the early results. It was the first motocross season where Cooper wasn’t consistently near the front. He finally found his old form toward the end of the season with a second overall at WW Ranch and then an overall win at Thunder Valley. He ended the season on a sour note when a bike malfunction kept him from racing the final moto of the year, dropping him to fifth in the standings—the worst of his three full seasons. His worst year still consisted of constantly battling around and inside the top five.

Entering the 2021 Monster Energy Supercross season, he broke his foot in a practice crash that he said hindered his fitness coming into the season opener. But then he took the first 250SX West Region main event win—his second straight season-opening win in a row. Bad starts hindered his results, but Cooper kept plugging away, gaining points steadily until he got back into the groove. He scratched out top fives on his bad nights and he capitalized on the days he felt good, taking three main event wins (and five total podiums) en route to the 250SX West Region title.

In the first 28 AMA Supercross main events, Cooper has finished on the podium 16 times (including four main event wins) and in his first 36 Pro Motocross events he has earned 14 overall podiums (including two overall wins). In total, his first 64 career events in both AMA Supercross and Motocross, Cooper has earned 30 podium finishes (six total wins), meaning he has earned a podium in over 46 percent of the races he has competed in so far as a pro. In supercross Cooper has yet to finish a main event outside of the top ten and in his 71 career pro motocross motos, he has only nine total motos with a finish worse than tenth.

Note: Cooper did not start the final moto of the 2021 season due to a bike issue but has not missed a moto otherwise since 2017.

Cooper finally turned a career of consistency into a title this year in supercross. In a field with a select few veterans and a handful of fast, but inexperienced riders, Cooper enters the summer as a title favorite again. Watch for Cooper to come out swinging this weekend at the Fox Raceway 1 National opener on May 29. In a long series where consistency often wins out, it wouldn’t be surprising to see Cooper hoisting another #1 plate this year.