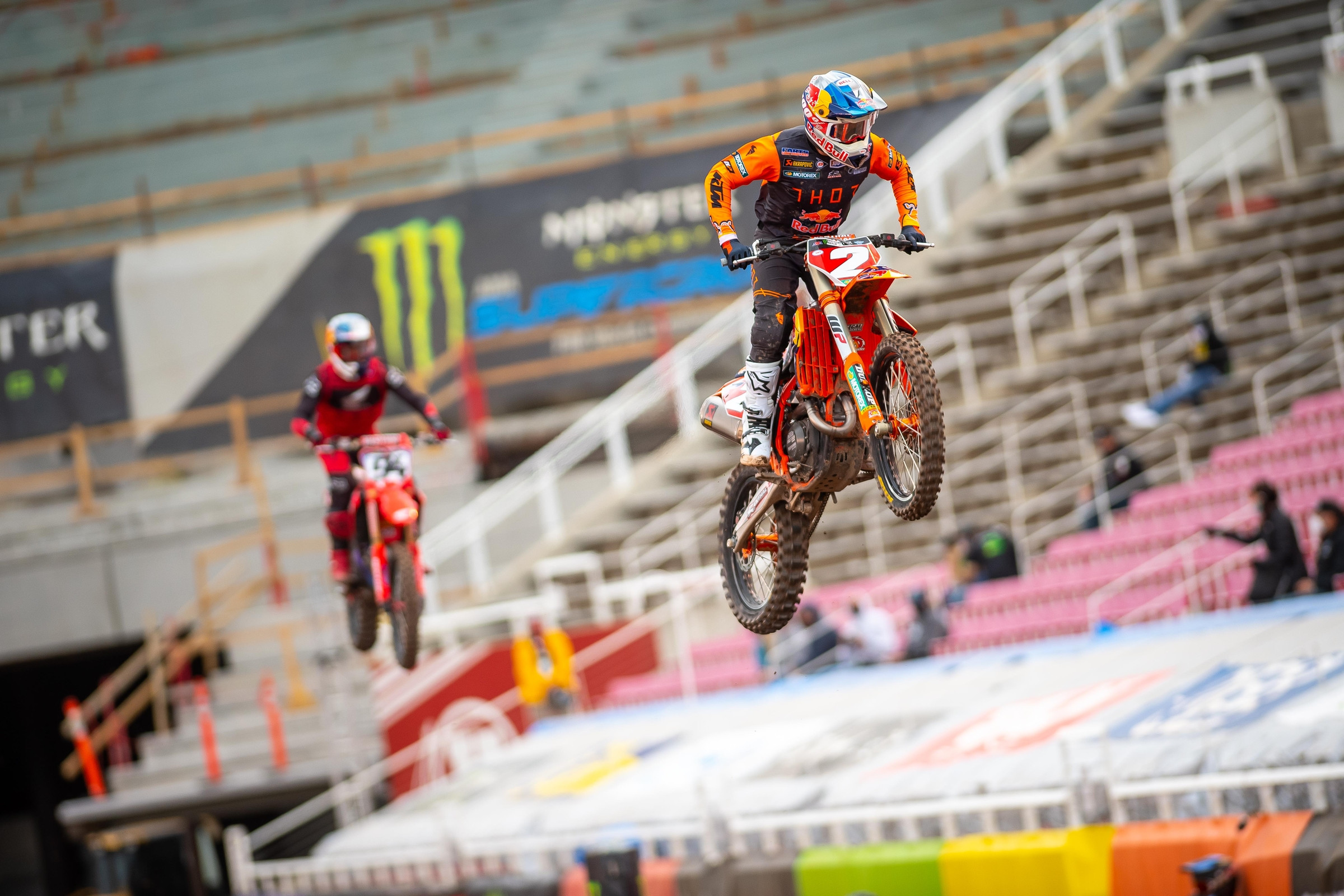 With a single race left and just two riders left in contention, the numbers are pretty easy for this one. For Cooper Webb to wrap up this title he simply needs to score four points, no matter what Roczen does. So, if Roczen wins and Webb finishes 19th, the two of them will tie in points. Since Webb has more wins, he gets the nod for the championship. If something crazy happens that results in Webb not qualifying, Roczen would be the ’21 champ with second place or better. Finally, if Roczen takes second, a last place for Webb would still be enough to get the job done. –Aaron Hansel

Out east the scenario isn’t terribly different than the 450SX Class. Two riders, Colt Nichols and Jo Shimoda, are still in contention, although Nichols has a big, 23-point lead on Shimoda. If the two tie in points, Nichols’ superior win count hands him the title, which means the only way Shimoda can pull this off is by winning and hoping Nichols has some seriously bad luck. If Nichols finishes 20th or better, he wins this title no matter what. If Shimoda finishes second place or worse, the championship is Nichols’, even if Nichols doesn’t qualify for the main event. –Hansel

Things are a little more wide open in the west, but not by much. Justin Cooper leads Hunter Lawrence by 20 points and has 22 points on Cameron McAdoo in third. Everyone else has been mathematically eliminated. For McAdoo to win the championship he’d need to win the finale, which would put him ahead of Lawrence, and he'd need Cooper to finish 20th or worse. A second place for McAdoo and a fourth or worse from Lawrence, coupled with a DNQ from Cooper also snags the title for the Monster Energy/Pro Circuit Kawasaki rider. If you’re Lawrence, A DNQ from Cooper means you’d need third or better, and you’d need to finish ahead of McAdoo. If Lawrence wins, an 18th or worse from Cooper hands the title to Lawrence. If that’s too much to keep track of, just remember this—if Cooper finishes 17th or better, which he will, the title is his no matter what. –Hansel

The final round this weekend is a Showdown round, which means it’ll be a combination of both the 250SX East and 250SX West riders competing in one main event. With the championship leaders having such healthy points gaps the additional talent from the opposite coasts isn’t likely to make much of a difference, but it’s still worth keeping track of. For example, if Cooper or Nichols has a big crash, or a mechanical issue forces either of them to nurse their machine through the main event, the faster overall pace of the class could play a role in their final finishing position. Regaining spots after a big crash when the pack if filled with the best riders from both divisions. What if one of them gets a flat tire a few laps in? These things aren’t likely to happen, but in a shootout race they’re much bigger issues if they do. –Hansel

Out With a Roar

Whether or not you’re a fan of Marvin Musquin, you can’t deny that he’s had some pretty bad luck this season, which has prevented him from racing to his true potential. As a result, he currently sits ninth in points. But he’s much better than that, and he proved he’s still got it when he took the checkers last week for his first supercross win of the season. Musquin probably isn’t going to climb up the ladder in the standings at all, and if he does, it’d only be one spot, but that doesn’t mean he’s not going to be doing his best to go back-to-back in Utah. Will the man who once wore gear adorned with cats go out like a lion in Salt Lake City? –Hansel

The slew of injuries in both 250SX regions this season has led to many surprising career-best finishes, but also some new faces sitting in tremendously good spots in the championship. Several riders on both coasts will likely be busting it to get into the Showdown because they want a few extra points to end this championship on a high. With each region having its own heat race, expect the battle for the ninth and final transfer spot be good. Beyond that, there’s always the combined-region LCQ which always provides fireworks. It’s certainly not just the battles out front to watch closely at the finale. –Kellen Brauer

Jett and Hunter Lawrence have both brought a breath of fresh air with them when they left the GP’s behind and brought their no holds barred attitude and personalities to the USA. Unfortunately, neither of them have really been at full health against each other… well… ever! On opposite coasts, the brothers have had very strong seasons. Hunter has 160 points in 250SX West while Jett has 151 points in 250SX East. Jett has two wins to Hunter’s one. This East/West Showdown will finally be a battle of the brothers as well, and the bragging rights might not mean more to anyone else than these two. –Brauer

The 2020 Monster Energy AMA Supercross season saw five different winners in the 450SX class between Eli Tomac, Ken Roczen, Cooper Webb, Justin Barcia, and Zach Osborne. This season saw that exact same group sans Osborne but adding Marvin Musquin to make five different winners once again. The finale often seems to provide some off the wall results with some riders cruising the season home and others sense the opportunity for an elusive win. We’ve seen Dylan Ferrandis, Aaron Plessinger, Jason Anderson, Chase Sexton, and now Malcolm Stewart all get close to the top step with strong rides that landed them on the podium throughout the season. Can one of these guys finally make it happen on Saturday? –Brauer

The Salt Lake City rounds are the farthest west Monster Energy Supercross got this year, and that typical late night west coast feel was really never felt at all in 2021. Except for the finale! That’s right, the last race of the year starts at 7 p.m. PDT / 10 p.m. EDT which means it will actually be 8 p.m. local time in Salt Lake City. After so many midday races, early starts, east coast rounds, etc. all year long, Saturday’s race actually is going to feel particularly late. It will definitely be a noticeable difference from what we’ve seen in 2021. –Brauer

The last thing we can look for on Saturday night is the curtain to close on the 2021 Monster Energy AMA Supercross season. Feld Motor Sports has done a great job jumping through the many hoops it took to even run a series with the COVID-19 restrictions in place, and as such, we got to see a full 17 round series take place in an almost completely normal timeframe. Even got to see some fans back at the races! Hats off to all of the operations crews for putting in the work to make this season happen and give the industry the ability to crown three champions this Saturday night. Let’s drop the gate one more time! –Brauer