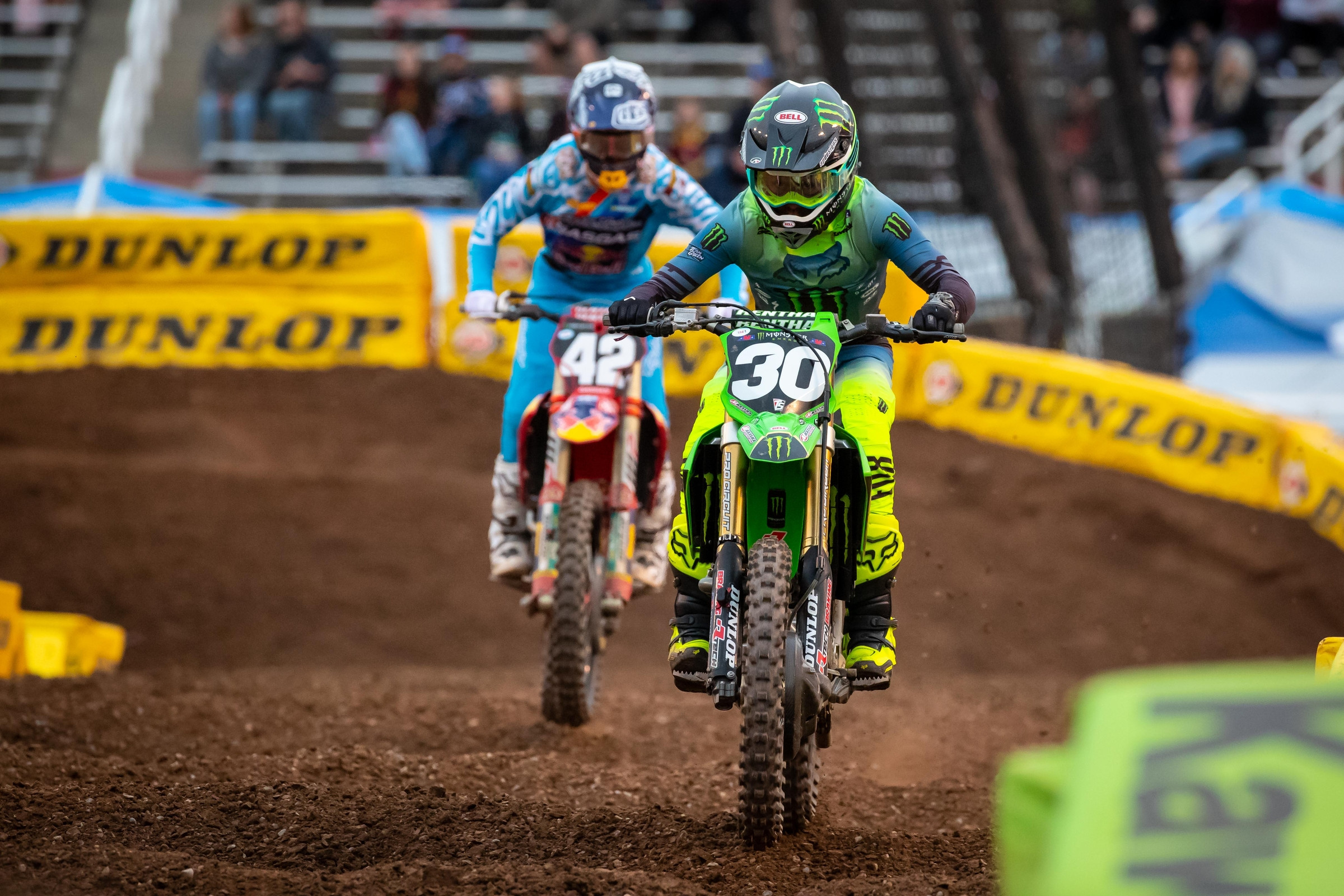 The key moment from Salt Lake City 1 was the moment that didn’t happen. Twice. A pair of riders won their first races of the season, huge career-boosting victories, in the toughest way possible. They withstood pressure throughout, filtered out the noise and avoided the big mistake. Both races had a feeling of almost inevitability. Jo Shimoda led but for how long? Marvin Musquin led but for how long? In the end, they never yielded. For that, they can walk away from the 2021 Monster Energy Supercross Championship with an entirely different feeling.

“I felt like I was the fastest guy out there today, I just crumbled on the race craft, trying to make passes in spots that weren’t ideal, and it cost me the win,” admitted Mosiman in a team statement. “I believe I was the guy that should have been winning and it’s disappointing but I’m trying to learn from it. I will be better going forward.”

“It feels amazing,” said Shimoda. “I knew something was coming. I had a few podiums this year. The race I did today was more like, I just kind of kept my pace. I knew I wasn’t the fastest today, but finally I just got a holeshot and with the whole race it was not easy, but I knew it was coming. So, I’m pretty happy with it.”

Jett was also fast enough to catch Jo, but credit to Shimoda. When Jett closed in, Shimoda remained calm and cleaned the trickiest section on the track, a difficult table-over-triple. He did it more consistently than Jett. Getting that obstacle clean a few times when Jett didn’t gave him extra breathing room down the stretch. He also dealt with heavy lapped traffic yet weaved his way through under pressure with the calm of a veteran.

“Honestly I think I handled the pressure not bad,” he said. “I didn’t make any mistakes in front of him. But the lappers obviously were cross jumping in front of me. That kind of slowed me down a little bit. Being in the lead, first half of the races, I was a little bit nervous and tight.”

Shimoda is mathematically still in the 250SX East Region title fight, but it’s 99 percent likely the crown goes to Colt Nichols. That really doesn’t matter. This is Jo’s second professional supercross season and to walk away from it with a race win puts him on an entirely different level for next year.

The 450 main event win was just as big for Marvin Musquin. The Red Bull KTM veteran had not won since 2019, missed all of supercross last year, and sat ninth in points coming into Salt Lake City 1. It had been that kind of season. Yet down the stretch he found himself leading, and against today’s toughest late-race opponent in Cooper Webb. Few can outfox Webb in the final five minutes, but Musquin has not forgotten how to win races.

“It’s hard to explain, but when you are in that bubble, when you’re so focused on yourself and your riding… I’ve been obviously in that position for many years and been able to win a couple main events in my career, but it’s just maybe experience that helped me, even though this year it hadn’t happened.”

Webb was quicker than Musquin in the whoops and used that to close in. With Webb’s recent rate of race wins, it seemed inevitable that he would zap his teammate just like all the other vanquished foes throughout the year.

Nope. Musquin managed to change his line in the whoops and figure out how to match Webb there. Webb tried some inside lines to show his teammate a wheel, but Musquin stuck to the outsides so he could nail the biggest rhythms—including the same triple-over-table that helped Shimoda. It was race craft, experience, fitness and some grit that powered Marvin to the win. He’s still just ninth in points, far off of his standing in his last supercross season, but the race win makes his season look much different. It was only one night, but Marvin slayed the dragons again.

“It was super good,” said Musquin. “To get a win like that, it’s just, whoa. When it’s definitely not expected, it’s a great feeling.”