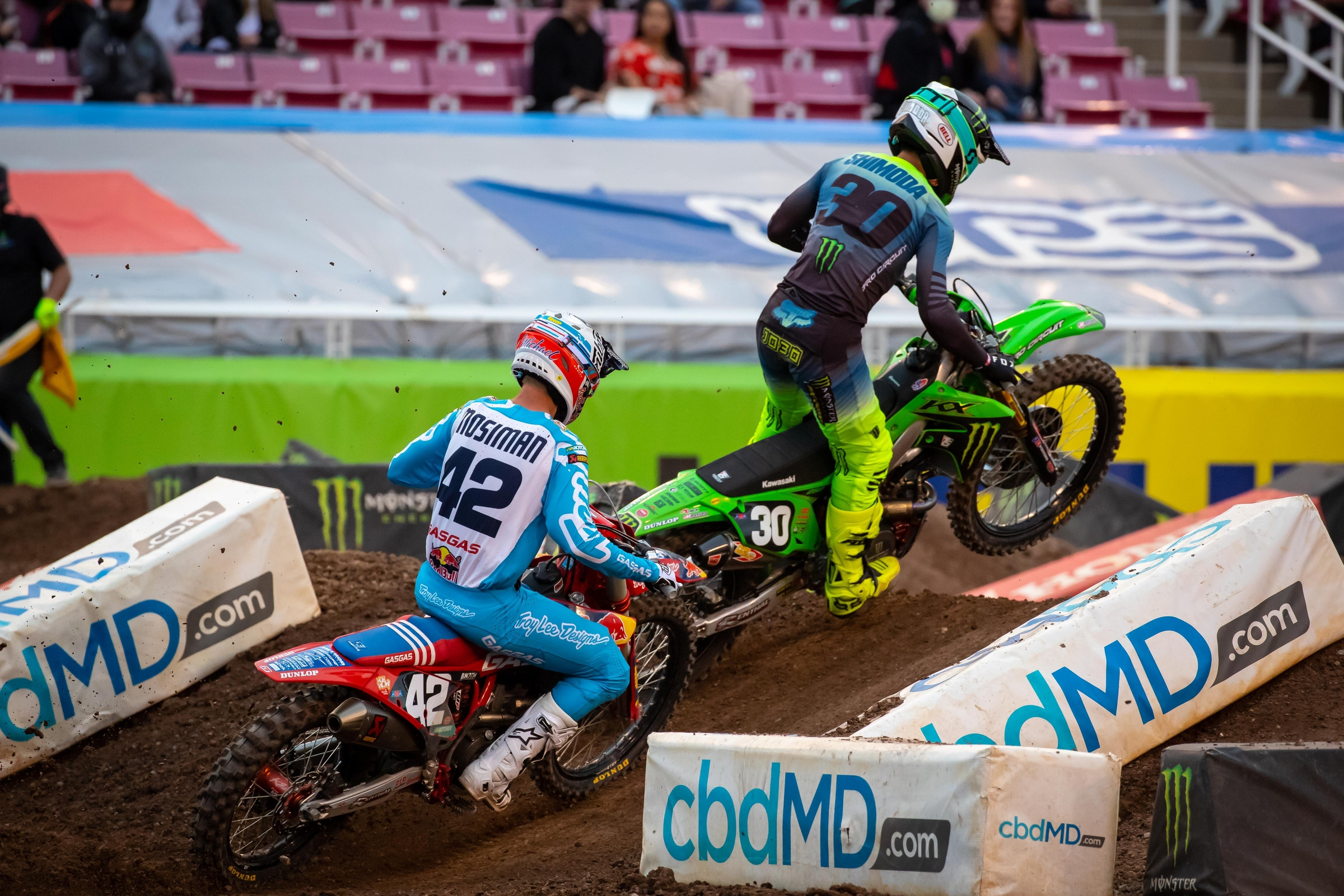 A lot happened at the 16th round of the 2021 Monster Energy AMA Supercross at Rice-Eccles Stadium, leaving us with plenty to talk about. As such, we fired some questions off to long-time pro racer Jason Thomas to see what he had to say about everything.

Martin Davalos retired! He's been a much-discussed part of our podcasts for the last decade. What's the Marty legacy for you?

Marty was pure entertainment on the racetrack. He was often the fastest rider in 250 supercross but was rarely able to capitalize on that speed. His ability to go incredibly fast was unfortunately equally matched by his inability to sustain that pace due to falls. He was yin and yang personified.

I have never seen someone trust their front tire the way Marty did. Further, that trust was unshakable in the wake of consistent disappointment. Regardless of brand, spec, construction, or tread pattern, front tires have limits. Lean too far or brake too hard and any tire will lose traction. Marty was unwilling to accept this rule of physics, relentlessly pushing his front tire past any reasonable ask. Marty losing the front end and subsequently seeing the yellow flag fly is an image I will take with me for years to come.

In all seriousness, though, Marty is a great guy. He’s always smiling and genuinely lifting the mood of those around him. I can’t say that for every rider in the pits. There are so many riders who will claim him as their favorite teammate ever. That’s what his peers think, and that speaks volumes. It’s a bummer that he was never able to capture that elusive 250 title because I believe he was the best rider more than a few times. I hope he lands somewhere in the industry because I think he has a lot left to offer.

Were you surprised Marvin Musquin hung in there under the Cooper Webb attack? Few are able to survive Cooper's late-race offense.

I was! Often times when we see an unexpected result, though, we can find underlying reasons for it. I believe that to be the case here, too. While I don’t have a way to prove these two theories, I think I can make a logical case for them.

First, I believe Webb is in championship mode. That constant thought of “just don’t screw this up” subconsciously leads riders to be risk averse. Because of this, Webb would have taken less chances in those last few laps and been more willing to settle. That’s not Webb’s style at all so I would bet there was a tug-of-war going on inside his head. His will to win was battling the logical approach that knows he is ahead of Ken Roczen, which is the most important aspect of the weekend. Put simply, I believe in a more urgent scenario where he needed every point, I think Webb could have forced a pass. That would have involved more risk, though, and I don’t believe Webb was willing to accept more risk. Not now, when the title is all but sealed.

The second aspect of this was the familiarity that Musquin likely felt. These two practice together hundreds of times per season. They know each other’s tendencies, strengths, and weaknesses. Spending that much time together also removes a bit of the mystique that other riders might feel regarding a rival. They get suited up right next to each other each and every day, not to mention being teammates as well. That teammate aspect also adds to the comfort level as Musquin would be less likely to fear a takeout attempt or overly aggressive move. He would be more willing to take his preferred line knowing that he is unlikely to get contact from his teammate in a championship winning situation. I think that comfort and familiarity helped him ride more confidently in those final laps and led to the win.

Were the Salt Lake City whoops tricky? They looked small but we did see large speed variations depending on line choice and rider skill.

They were! They were just big enough to disallow jumping as a viable choice, forcing riders to blitz deteriorating whoops at the end of the main event. Even more tricky, the SLC dirt has a unique make-up that likes to create wheel spin. The rear tire was spinning and deflecting off of each whoop, making it difficult to drive forward and worse, reducing predictability. That difficulty was evident as many riders would hesitate on entry, the tell-tale sign of difficult whoops. Had there been more traction and less deterioration, riders would have exited that berm with reckless abandon and accelerated into the first whoop with full force. Instead, we saw half measures for most of the field. Unless you’re Mookie. Then you just send it.

Talk about Malcolm Stewart’s ride for a podium and his overall growth as a racer. Everyone knows Mookie from way back because he's James Stewart's brother, but he's come a long way in his own career.

That was a bit surprising, right? Mookie has adopted a more conservative approach in the last few seasons and his health thanks him. It’s also a bit less entertaining to watch but I think finding consistency was a great move for his career longevity. The real magic would be combining the blinding speed he has under the hood with this more recent ability to turn in top ten finishes. Saturday’s podium could be a glimpse of what that would look like.

Could you imagine how much Mookie would add to a series if he could improve just a tiny bit more and become a championship contender? Feld Entertainment would LOVE to promote Mookie both on his own merit and his family legacy.

Michael Mosiman had the speed to win but his race craft—by his own admission—cost him. Can you describe what you saw when he tried to get Jo Shimoda for the lead?

It was a convoluted mess of half measures. Passes are best made with one concise, well-planned move. With so many laps spent behind Shimoda, Mosiman should have made a plan based on the information he gleaned in that span. Find a vulnerability in Shimoda’s approach and exploit it convincingly. That could be entering a corner, the whoops, a different rhythm, etc. There is simply no upside to following someone unless you can absorb information and use it against your competitor.

Mosiman should have won that race in my opinion. He was faster than Shimoda and would have run away to an uncontested victory had he gotten around. Unfortunately for Mosiman, he kept attempting passes when the move was unavailable. Even worse, those failed moves were made in areas that really penalized his lap time in the aftermath. For instance, if you’re going to try for a block pass, make the move in an area where you won’t lose multiple seconds if you miss. Trying to make a move before the whoops is a risky proposition because if you get there late (which he did), you now have zero momentum to blitz the whoops. Sharp entry angles in corners are used to make passes, not speed. Not only did he miss the pass, he lost time and allowed Jett Lawrence to close in even more. It was frustrating to watch and has to be even more difficult for him to review this week.

Christian Craig tried to ride with a broken fibula to keep his title hopes alive. Can you describe how crazy racers have to be sometimes?

Often times, riders will not even get an X-ray in this situation. If I wasn’t in a life threatening situation and I also knew that I was racing regardless of the pain, I really didn’t want to know the extent of the injury. What’s the upside of knowing something is cracked or torn if you’re going to go out there, anyway?

I think he made the right decision. He would have forever wondered if it was possible had he not tried. I have raced with a torn ACL in two different seasons (2004 and 2011) and in both cases, I was willing to suffer through pain to continue. Most racers are willing to endure physical pain in order to avoid the mental pain of an ended season. Even worse for Craig, his title chances were lost, too.

Racers are not always driven by logic. That’s almost a given if you consider the risk that we assume every time we line up behind the gate. Any time I was injured, my first question was, “Can I still race with this injury?” It’s just a different mindset that racers have because the threat of injury is always prevalent. Racing at the professional level requires acceptance that injury is not only a possibility, it’s nearly a certainty if done for long enough.

Jett Lawrence went off on Michael Mosiman, not just for what happened in the main event, but he says for a longer history of smaller incidents on the track. Can you describe the kind of things racers see and feel from others that might not be seen on TV or in the stands?

The most critical part of this is perception. The way we see things is not always the way racers see the same scenario. How they perceive a situation is the only thing that matters, too. Throughout a season there can be many smaller incidents from practice to qualifying to racing that help racer’s identify who they can trust and who they can’t. It doesn’t always mean high-profile take outs, just smaller checks that a racer will file away in his brain. When Lawrence went off on Mosiman in the press conference, he talked about Saturday night, but also a much bigger picture. I don’t think this is just about Saturday, or even just about the two block passes they executed on each other earlier this season. Clearly he’s been frustrated with Mosiman for a long time.

If Jett believes Mosiman was going to take him out in that corner before the finish line, who am I to tell him he’s wrong? They clearly don’t like each other and this was just another chapter in that story.

We also aren’t privy to the things said in private. Words can add fuel to this fire and Jett’s comments surely did that. I have a feeling that this isn’t over and it doesn’t seem like either of them care for it to be.

Any chance titles get crazy this weekend or are these things all on ice?

I don’t believe so. I think this is going to be a fun race to watch with a chance for unlikely results but championship wise, we are done here. Watch for the title favorites to be on cruise control and riders like Shimoda, Jett, Hunter Lawrence, Cameron McAdoo, and Mosiman to steal the show in the 250SX Class.

For the 450SX Class, Webb will ride well within his comfort zone. That could lead to a win or it could be a fifth. He won’t force anything, though. He knows how to manage a race like this so don’t expect any drama from the #2.

I am a fantasy zero. End of message.