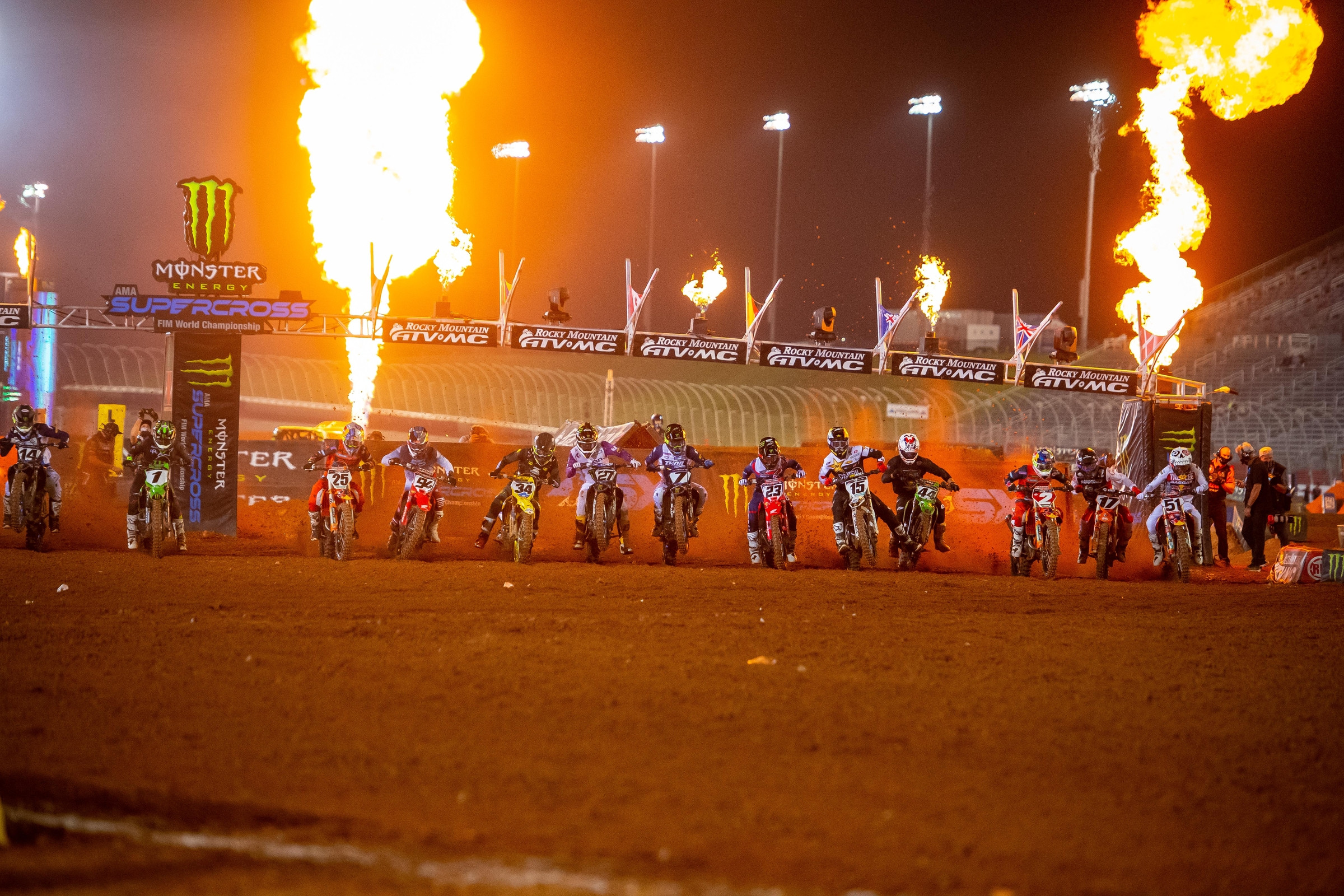 Don’t give up on this Monster Energy Supercross title chase just yet. Ken Roczen sure isn’t. In a puzzling bounce back, Roczen rebounded from arguably his worst ride of the season with arguably his best, as he dominated the proceedings at the second Atlanta supercross of the season. He was ninth on Saturday.

“Every time we go race, first off, the sport is freaking hard, you know what I mean?” said Roczen in the post-race press conference. “There’s different variables all the time could be track could be bike. We kind of threw a lot at me with the bike, tried to make some changes throughout all three practices, found something that was good and better. But also, at first, it’s unproven until you race it and race good on it. In general Saturday was just a tough one, I was just struggling and couldn’t really do anything on the track. This is not an excuse it just is what it is. Today things turned around. I just never lose hope. You see the points fizzling away but at some point, I have to look away from that. I’ve had some tough times, in general, and at some point, you have to just let go of that as well and regroup. Mostly, I’m just trying not to get over my head and stay calm, even though this win came at just the right time and we really needed it.”

Further helping Kenny’s cause is another sub-par riding night for points leader Cooper Webb, who, like on Saturday, didn’t have race-winning pace and hence lost a few positions after starting up front. On Saturday Webb ended up third, this time he was pushed back to fifth. Webb fought back late and tried to get back into fourth but ended up bumping into the back of Justin Barcia and going down. Eli Tomac snuck by, pushing Webb to sixth. This leaves Roczen 13 points down with three races remaining.

“It was a bit of a rough day for us," said Webb in a team statement. "In the Main Event, I got a great start and put myself where I needed to be but I didn’t execute. I finally turned it around, started riding well and hitting my marks a bit and then I caught Barcia and was trying to make a pass. We had some close calls and then over the wall, I hit his back tire and fell. It’s a bummer but we’ll come back for Atlanta 3 and work with the team and myself to hopefully be in the winner’s circle.”

Roczen’s teammate Chase Sexton helped. Webb and Roczen battled for the lead off the start and then Roczen controlled it, then Sexton blitzed by Webb to take second and hold it to the end That’s back-to-back seconds for Sexton.

"For me it’s been a little bit of a struggle this year, I had some crashes, it was pretty mentally defeating to get those hits week in and week out," said Sexton. "I’m not really used to it, I’m usually a pretty smooth rider. It took a hit on my confidence. Dallas helped and I think I was in a better headspace coming into this weekend. Definitely mentally, and also with the bike, it’s been just a really big learning stage, and I think we’re going in the right direction, feeling more comfortable with myself."

Sexton is one of several riders hitting stride late in the season and gunning for a 450 win. Jason Anderson topped qualifying for the second-straight race, but his engine stalled in his heat race, which set him way back. As he came through the pack, he messed up a rhythm lane and got landed on by Alex Ray, who was drifting in the air. Anderson was lucky to escape injury, then he went to the LCQ, won it, and netted a decent start in the main. He powered past Webb in the whoops and then used a nifty hop over a wall jump to get into third.

“I think it’s just the group I’m around,” said Anderson of he re-found enjoyment. “I ride with the Lawrence brothers and Joey [Savatgy]. We work hard and we enjoy it. That’s something I’ve been searching for for a few years. And my life in general, it’s great to be able to race dirt bikes. I’m getting older and I feel like I’m in a good spot in life. It’s coming around.”

Barcia hung tough for fourth, then came Tomac, who was not able to replicate his Saturday night race-winning ride. Then came Webb. Marvin Musquin won his heat race but, like Webb, lost a few spots in the whoops.

“I had a really good start in the Main Event but unfortunately I was missing a little bit of intensity and I ended up getting passed by a couple guys, which killed my momentum," said Musquin in a team statement. "It was a tough race physically so I was trying to be consistent and just keep pushing until the checkered flag.”

Aaron Plessinger showed speed and aggression in practice but his starts in the heat and the main were not good, he ended up eighth.

Dean Wilson bounced back well from not qualifying on Saturday, netting ninth, and Joey Savatgy rounded out the top ten.

Roczen jumping back into striking distance in 450 points somehow pales in comparison to the drama in the 250 class, where Cameron McAdoo endured one of the wildest crashes in supercross history—no exaggeration—when he endoed a jump and then got caught in his flipping bike, which actually shot up upwards and on top of the over-under tunnel. At that moment, McAdoo looked down and out while title rival Justin Cooper checked out up front. Then the race was red flagged while McAdoo was down, but he was able to get up, received medical clearance from the Alpinestars Medics, and get back to the gate for the restart. Poetically, McAdoo shot into the lead briefly on the restart, but Garrett Marchbanks block passed him, which allowed Cooper and Nate Thrasher to get by. Cooper settled things back down by checking out again, while McAdoo ran as high as second before the adrenaline started to wane.

“The crash was obviously crazy, I hit my leg really, really bad and I couldn’t move it,” said McAdoo. “I was struggling to get my leg back moving and do my best to get up and get to my bike. I had the medics saying, “No, you probably shouldn’t” but they helped me down the jump. I got back to my bike and I told them I wanted to race. [Doctor] Bodnar came over and they checked me out thoroughly. I passed all the tests. My bike was mangled. The mechanics did the best they could—taping shrouds on, zip tying stuff, my bars were really rolled back. I didn’t realize it that much until I was leading, but yeah, it was tough, a tough race. Five minutes in when the adrenaline wore off, I realized how beat up I was, and I’m pretty sore now.”

McAdoo’s heroic ride got the accolades, but Cooper garnered his own kudos with the win.

“Always when you’re winning a race and it’s red flagged it’s hard to regroup and do the same thing. It’s hard to go back-to-back and do it again, especially in the main event where the pressure is there. I just saw the crash and I’ve never seen a crash that gnarly," said Cooper. "Props to him for being able to get up under his own power. But back to my mindset, you have to put yourself back in the zone, calm down, get the heart rate down. And I was able to do it.”

Hunter Lawrence continues to ride well, this time coming through the pack for second.

"We made a pretty big change to the shock before the main event. I was struggling throughout the day and the change was good," said Lawrence. "I think my speed was there, didn’t get the best start, but yeah I think I got fastest lap time and had a really good pace going from the halfway point onwards. I wish I could have put myself in a better position off the start for sure."