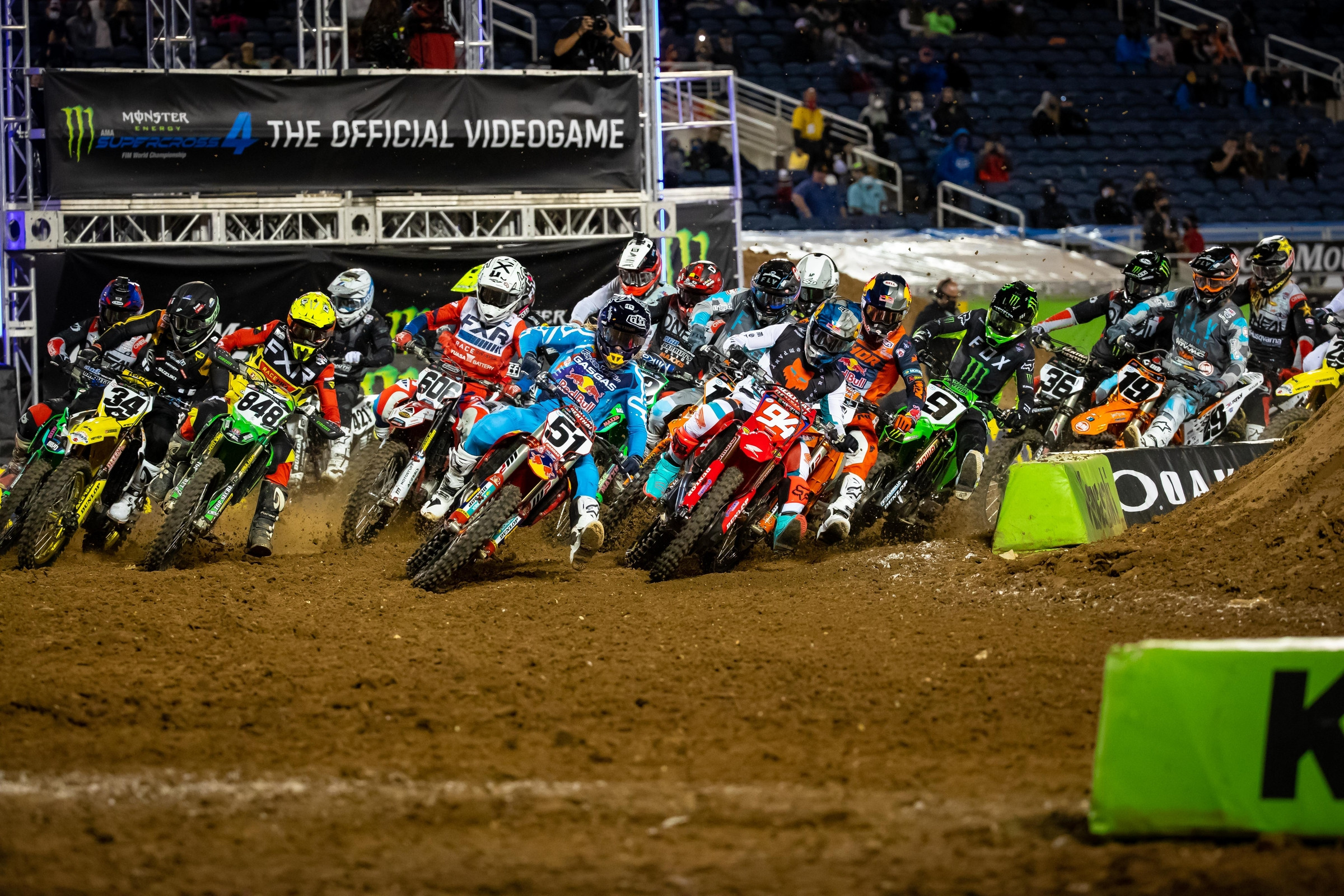 Some of the names changed, but the story remained the same in Monster Energy Supercross. Round eight of the championship welcomed the 250SX West Region to action for the first time this year, but this race in Orlando ended up much like the rugged rounds including 250SX East: too many crashes and injuries in the 250s, and more good, close racing in the 450s. Precision or chaos? How do you like your racing? The two classes delivered on their traditional stuff in O-Town.

A traditional winner in the 450 class, too, with Red Bull KTM’s Cooper Webb really finding himself now. Webb started well, and this time his chief championship rival Ken Roczen did not. That was helpful, and then Webb did the rest, managing the race well as he usually does. He started fourth, then Justin Barcia roughed up Marvin Musquin early and Webb shot past them both to get to second. Up ahead, Adam Cianciarulo was riding well but Webb eventually reeled him in and made the move for the lead. Cianciaurulo and then Musquin stayed close, but Webb brought home the win for the Orlando sweep.

Webb seemed happier than usual on the podium.

“Yeah this one’s huge, man back to back wins is amazing,” said Webb. “It was a great race battling with AC. To be in Orlando, I don’t know, I guess this is my new spot I guess. Orlando. Great race, great points tonight, Marv was coming at the end, I know he strong he is I ride with him every day. Man, what a beautiful race, I felt like start to finish I was in my comfort zone. Just incredible.”

Aiding Webb’s championship cause, Roczen was unable to completely overcome a bad start—the Honda HRC man wheelied out of the gate. Roczen ended up fourth, so Webb had cut the series lead down to just six.

“I was kind of gauging where everyone was, and I was liking what I was seeing at the beginning [with Roczen starting at mid-pack],” said Webb. “I knew I needed to capitalize on it. I saw then and knew it was a big night to get that win and get that extra three [points] on second. When the championship contender isn’t on the podium, it’s definitely a plus.”

Musquin backed up his teammate with his best ride of the season, taking second. He snaked back around Barcia in the corners near the finish line, then put pressure on Cianciarulo. Cianciarulo then crashed hard in the whoops with a big endo—the whoops were super dry and slick and it appears Cianciarulo got wheel spin. No word yet on the condition of the Monster Energy Kawasaki rider, who went from second to DNF, and Musquin inherited second. Musquin kept his teammate Webb in check most of the way, too.

“I’m super happy that we tested this week and I just had a different setup today and it showed,” said Musquin. “I showed better riding and to be in that position and to gain a little bit of ground on Cooper there. I started slowing down in the whoops. It was really sketchy there… I had good feeling and fun and pleasure on a tough track so that means a lot.”

Musquin has definitely progressed from the start of the season. “To get that very first podium at Houston, it definitely surprised me,” he said. “Then I got another podium at Indy 3 but now I’m feeling I’m in a better position because I got a podium today on a tough track. This year has been tough, but it’s been a comeback. When I had my knee injury, the first day back on the track I wasn’t sure if everything was going to be okay, so it feels good to be back for sure.”

Barcia (Troy Lee Designs/Red Bull GasGas) had a rough start to the day with a big practice crash. He also wasn’t comfortable on the slick track. Yet, he dug into his old playbook, which is getting a good start and fighting hard under pressure. Barcia spent most of the race clinging to his position with Eli Tomac and Roczen all over him. He never let them through.

“I could see that green machine [Tomac] behind me a lot of those pivoting corners,” said Barcia after taking third. Barcia tried to jump the whoops at the beginning of the race but knew it wasn’t working, so he switched back to skimming. “When I went to skimming, I kind of broke him a little bit but then Kenny came, so it was kind of a double whammy for me. That pressure was extremely intense from Eli and then Ken at the end.”

Roczen kept heat on Barcia all the way to the last lap but couldn’t find an opening, he had to settle for fourth. The surprised was Tomac, who faded late in the race. Roczen got by him and so did the surging Jason Anderson, who went by in the whoops. Anderson’s fifth is a season best; he also won his heat race and was fastest qualifier. Much, much improved from where he was at the start of the season.

Tomac was sixth, meaning the defending Monster Energy Supercross Champion has missed the podium in three-straight races, and is 31 points down in the championship.

Malcolm Stewart (Monster Energy Star Racing Yamaha) was in the battle with Tomac and Roczen early but they got away, he took seventh. Zach Osborne couldn’t back his podium from last weekend, he was eight, then came Aaron Plessinger in ninth, and Justin Bogle a season-best tenth on his Rocky Mountain ATV/MC WPS KTM.

So, onto the chaos of the 250s. The 250 East class was besieged by injuries, so the West was expected to offer some relief, but instead offered up its own bumps and lumps through the very first corner. Veteran contender Jeremy Martin was landed on by rookie Stylez Robertson as they used different jump combinations out of turn one. Both went down and Martin got up holding his shoulder. Just like that, his race was done, and even worse, his brother Alex was down out on the track just two corners further, with a suspected concussion. That left the Martin brothers in 22nd and 21st at the end of the night. Ouch.

Justin Cooper had the lead but the race was red flagged so officials could attend to Alex Martin. Cameron McAdoo clipped one of the medics as the red flag was out.

“Dude there was medic guys running everywhere and I think Cameron even got one of them,” said Cooper.

“It was pretty crazy,” said McAdoo. “We started getting red cross flags before we even got to the triple. One of the medics, after Justin had gone by, was trying to get across the track to Alex and he crossed in front of me. I had nowhere to go. He jumped in front of me. I don’t think the medic saw me coming.”

The field restarted—without the Martins—but Cooper nailed the start again. After that, it was an uneventful race for him, as the Monster Energy/Star Yamaha Racing rider checked out. For a rider who broke a bone in his foot few weeks ago, it was the best-case scenario.

“When you break a bone you really can’t do much,” he said. “I had to stay off the foot for a good three weeks and it was tough. The fitness isn’t probably as good as it could be, but I was able to get a holeshot and ride some clean laps and didn’t have to push into that hard zone. The bike was setup good from the offseason and I didn’t have any issues today.

“I had a lot of questions for myself,” Cooper continued. “I didn’t know what was going to happen. When I crashed, it was like four weeks away and I knew something was broken right away… I think I had three or four days on supercross before this, but I felt good right away… Just really excited to be back racing, especially because I didn’t think I was going to make this.”

McAdoo started about fourth on the restart and came home second, four seconds behind. He also won his heat race.

“I’m obviously really comfortable right now with the team and I can communicate well with them now,” said McAdoo about his second year with the team. “This year, to be able to develop the new bike, I think I understand the team well and the team understands me well. I think we’re in a good spot all together and this is the best way I’ve started a season.”

One of the biggest questions of the off-season was the potential of Garrett Marchbanks and the ClubMX team. Could the former Monster Energy/Pro Circuit Kawasaki rider battle for podiums against the factory riders? So far, so good. It wasn’t an amazing race for Marchbanks but he simply rode solid as others had problems. For example, Jordon Smith was running second early and went down hard in the whoops. He didn’t finish the race. Marchbanks started about tenth and worked his way to fourth, then passed Rockstar Energy Husqvarna’s Jalek Swoll to take over third.

"The day started off rough. I was just not connecting with the track at all," Marchbanks said in the post-race press conference. "Honestly, to get third place at the end of the night, I’m pretty pumped and so is the team."