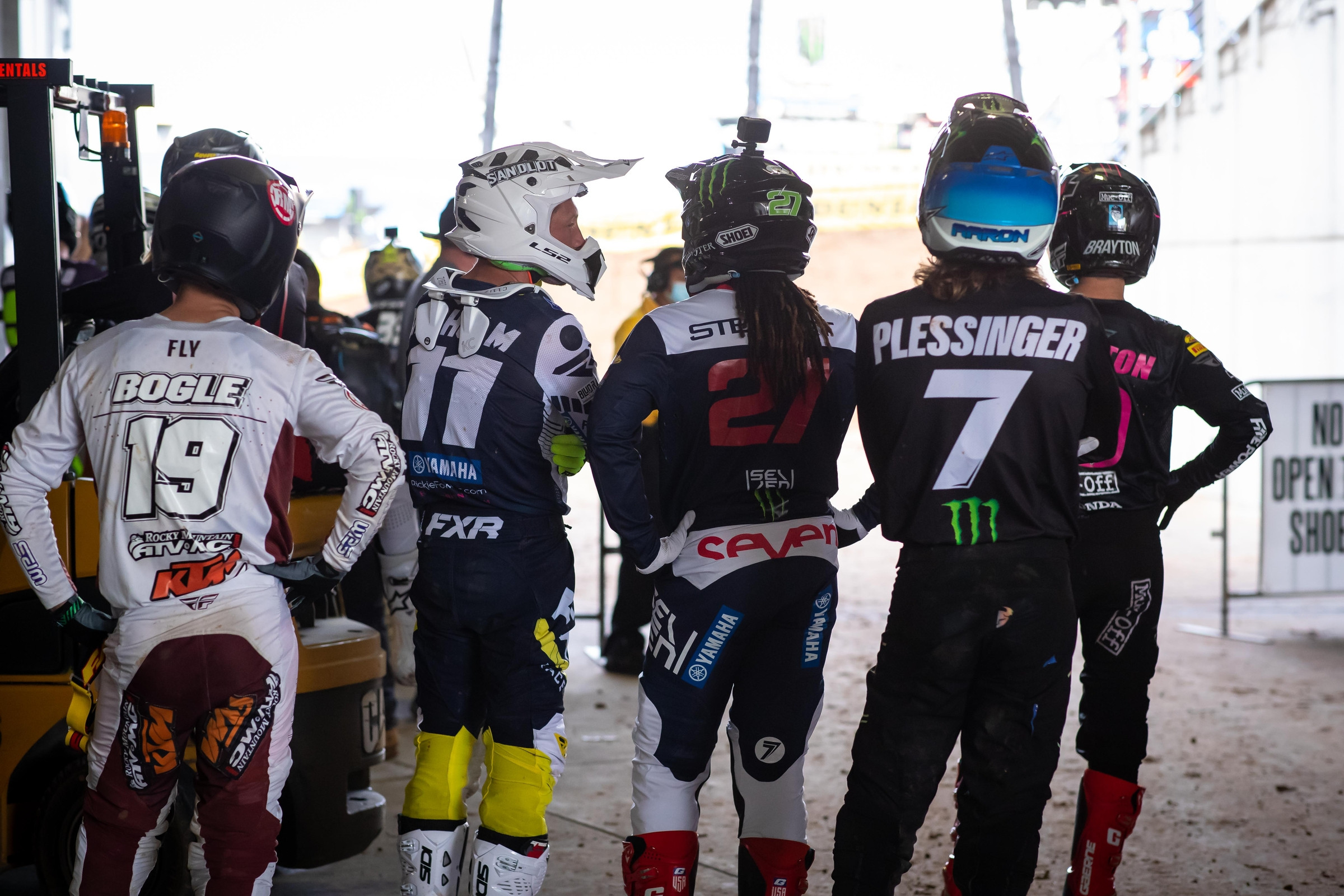 Round eight brings us the second Orlando round. Last weekend hosted the first Orlando event in 14 years and it was a great return. The weather finally cooperated after a stormy morning, leaving a tacky but tricky surface. The layout was a mirror image of the 2007 event, but I raced the 2007 version, and the actual racetrack was much different. The height and angles of jumps can completely change the look and feel of a track, and that’s exactly what we saw with this throwback edition of Orlando. As we look ahead to this Saturday’s event, I expect a slippery surface. The dirt will harden throughout the week and make for a treacherous main event on Saturday night. The upside is that the harder dirt will deteriorate less, similar to what we would see in California. The downside is that traction could be at a premium.

The start for Orlando 2 is a bit shorter than last week. It still funnels into a long left hander and immediately has riders into a rhythm section…Wait! BREAKING NEWS! I spent three hours formulating thoughts on this weekend’s track only to find out today that we’re going to see a track much more similar in layout to last Saturday. After rough weather throughout the week in Orlando, the Dirt Wurx crew was unable to make the significant changes previously planned. So, with that in mind, let’s briefly look through the mildly updated course. I will never get back the hours I spent breaking down the original track map.

Immediately following Orlando 1 Supercross, we did a full maintenance of the track and re-covered it in plastic to preserve what we had. 3 Full days are required to safely change over the track to the original concept for Orlando 2 and unfortunately the weather throughout

The start is exactly the same as round seven with a long left hander leading into a rhythm section. While the first lane is laid out the same, the approach will be different. Last week had a jump over table and then 3-3. This week will be a 2-3-3-1 that I believe will be the race line for most of the field. With a double as the entry, we won’t see the same level of difficulty that tripling from the corner would present.

The next two lanes are identical to round seven with a standard supercross triple leading into a bowl berm, immediately followed by the only whoops section on the course. I will be anxiously awaiting my first glimpse of the round eight whoops as they were a big storyline for round seven. I expect a different build than what we saw last week, perhaps making them smaller and faster than a week ago. There were several close calls due because last week’s whoops were so steep. I’m guessing they give everyone a break this week on that front.

Riders will again cross the mechanics’ area and lead into a rhythm section but this week it will be much more technical. The fastest line will be to triple out of the corner, triple over a tabletop, and then triple into the following corner. While that looks great on paper, I wonder if the 250s will be able to execute this during an actual race environment. The most critical aspect of this section will be to triple out of the first corner. If that first triple gets botched, there is simply no other rhythm option on par. Watch for this to be a big point of emphasis for many of the B and C practices Saturday afternoon.

The rest of the track leading to the finish line is identical to round seven. The one question I have is if riders will choose to go 3-3 this week or if they will again opt for the 3-2-1. Last week, the following corner’s proximity to the landing of the final jump made the 3-2-1 the better line. If that jump is still placed so close to the corner, look for the same inside line to develop, even if it seems slower on paper.

Roll on the 250SX West Region! After seven rounds of 250SX East Region racing, I am more than happy to welcome in a whole new group of racers. Not only do we have fresh faces, we have a whole gaggle of them! The 250SX West Region looks to be much deeper than the depleted East series. The elites in each series are comparable in my opinion but after the first few positions, the depth dropped off considerably for the departing Easterners.

As for who to choose at Orlando 2, it’s not easy. We don’t have any recent information to draw from as these guys haven’t raced SX since last June. Compared to last year, team changes, bike changes, heck even elevation and temperature changes are all in play when making this week’s choices. I do think there will be opportunity to venture off the beaten path for those looking to take a chance. Many of the teams have looked very similar lately due to the aforementioned depth concerns. With a plethora of options this weekend, I’m expecting wild variations in 250 picks. Amen.

For the 450SX Class, we finally have Zach Osborne and Marvin Musquin into all-star territory, making them far less potent picks. Big point hauls have been scare lately, so I went rogue and put three all-stars on my team for Orlando 1. That’s not a strategy I often employ but when I simply can’t find a lot of upside throughout the field, this is what we get. I think I will take a few more chances at Orlando 2 but nothing really jumps off the page, either. I am thinking Shane McElrath will improve on his 17th at round 1 and Brandon Hartranft is due for a return to the main event. Broc Tickle will surely be looking to bounce back but at a 7 handicap, the upside is still on the limited side. Tread lightly if you’re wanting to get wild, this 450 class is more stacked than ever.

I quietly mumble “who and why is Rutledge Wood” several times throughout Saturday afternoon’s intermission.

Hunter Lawrence is served with an official request by NBC Sports to legally change his name to “Jett’s brother.”

I refrain from all Vince Friese references until 2022 in hopes of avoiding retribution from any member of the Alessi family.

Alex Nagy signs an endorsement contract with Holiday Inn Express, marking the end of an incredible era of sleeping in his van.