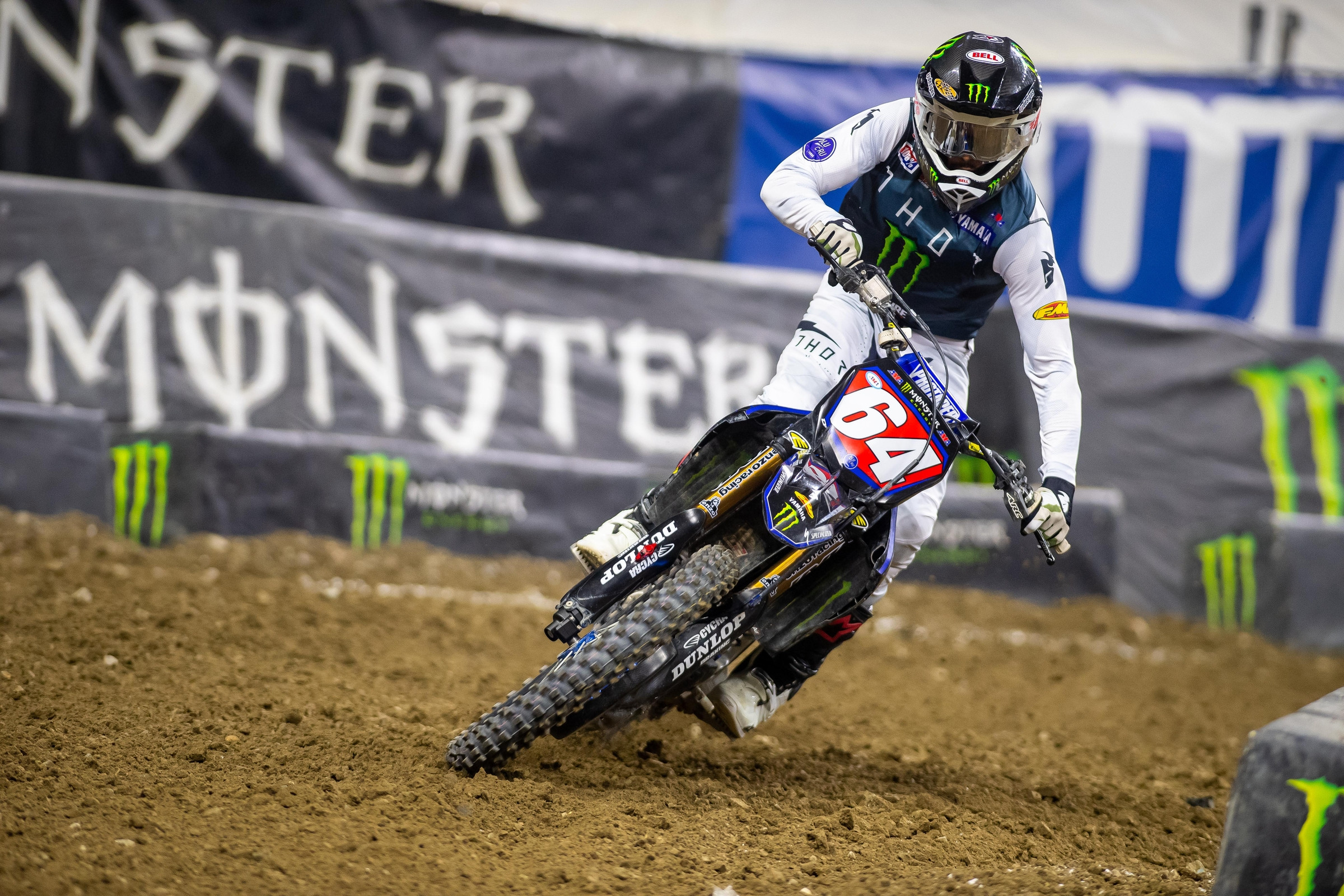 Monster Energy/Star Yamaha Racing’s Colt Nichols has suddenly taken control of the 250SX East Region, with three-straight wins, podiums in every race, and a growing points lead. How did he get here? Nichols’ story hasn’t been told enough. He had to go through arenacross to find a ride as a pro, spent time racing in Costa Rica just to make money, and endured years of injuries during his Star tenure.

“Everyone has their own little sack of rocks to carry and mine just happened to be the past few years,” he says.

Now he’s talking about winning races. He chatted with the media in a Wednesday night press conference.

Racer X: Colt, three in a row. Coming into the season you hadn't had that kind of success. You obviously wanted it. Now that you’ve got three in a row and the ball is rolling, what’s it feel like?
Colt Nichols: Definitely different than normal, but it feels great. Really, that’s what you want. I’ve been doing this for a while now and I’ve had my fair share of setbacks, so it feels good. I don't want to say it’s overdue, but it feels good to be in this position. I’ve wanted to do it for so long before, and now that I’ve had a healthy off-season and got some experience with the championship thing before [Note: Nichols was in the 2019 250SX West title hunt] that’s obviously helped. It’s awesome. I can’t really ask for much more. Three in a row. Going into Saturday I felt great on the bike. Fitness feels really good, and the bike feels awesome too. I’m pumped, man. I want to keep it moving and go into Saturday hungry.

We always love these kind of rags to riches stories, and I don't think we’ve told yours enough. I remember you as a Team Green guy as an amateur, and you didn’t even get a supercross ride when you turned pro. It’s been such a long journey. Can you explain how you got here?
Yeah, that’s what you want to hope for, but to say that I expected to be here? I don't know. I guess that’s what kept me going in those times when I didn’t know if I was going to race or not. After the Team Green years, I did arenacross. I got that set up through Ryan Holiday, the Team Green guy. Did that, and then that summer I raced in Costa Rica just because I had no other real option to go race. That was the only thing I could do to get paid a little bit of money! Then right after that I did Crossland Honda, just because Guy Cooper was the team manager. There to Rock River, then Rock River to here. During those times, like the ’13, ’14 era, I had no idea what the hell I was doing. I could have very easily went the other way and went to school or done whatever, but it was always for these kind of moments right there. That’s why I kind of kept going. Robbie [Reynard] was a big factor in all that. He really pushed me and told me I could do it one of these days. So I just kind of leaned on him a little bit in those times. It’s riveting to be at this point. There’s still a lot more to go and a lot more I want to accomplish, but just to be at the point I am now, I’m definitely soaking it all in and enjoying it day by day. Just thankful, really, just compared to where I was at one point. It’s a huge step.

What do you think one of the differences is? Are there certain things you learned along the way that led to this level of improvement?
Just maturity, understanding things a little more, understanding myself, what I need. That’s probably been the biggest difference just year to year. For this year, we did a lot of things different, even with my trainer, Gareth Swanepoel, that we had never done and I’ve trained with him for five years. So that was definitely a big step. Then just being with the team longer too and getting through an off-season healthy and actually doing some practice laps. Three of the five years I’ve raced with team I came into a supercross with about four weeks on the bike. So, that just makes it tough. Then you’re kind of playing catch-up and you try to move too quick, and then another injury would happen and you’re back to square one. So that was tough times, but everyone has their own little sack of rocks to carry and mine just happened to be the past few years.

Just to follow that, could you inspire other people? Have you ever talked to other riders and said, “Hey, man. This is where I was, and this is where I’m headed now?” To give them advice to not give up? Someone else is in your position, maybe they don’t go for it. But you’re proof that it could happen.
That’s what I hope, that I can be some inspiration to somebody. There’s been multiple people that have come up to me and told me the same kind of thing. They didn’t know what they were doing. I’m like, “Hey, I’ve been there.” I remember buying air filters and chain lube and doing all this stuff. [Laughs] I was there. It sucked at the time for sure, but it was always for the bigger picture of what I thought I could do, and that’s just winning races. I really hope I can inspire some kids. That’s the idea, for sure.

Last night, [Mitchell] Oldenburg was able to race in the main event without actually properly qualifying. We’ve heard from the media, from fans. I was wondering from the competitors that were actually in the race if you guys have any input on him getting in the race.
No. I didn’t really know honestly what happened. They thought he changed the frame or something. I didn’t really know what was going on. I don’t really know how to explain that. I don’t know if that means we just get a mulligan or something if we don’t make it in there! I guess he was going to be a 23rd rider regardless, is the way I got it explained. It was definitely a weird situation, then with Jett pulling out he was able to actually line up on the gate. It was all just kind of weird. I guess it was AMA’s fault as to why he even got to line up in the first place because they didn’t let him do the LCQ. It was just a really weird deal. I still don’t honestly understand it. But it was good for him. He’s obviously a guy that can go in there and get some good, solid results so it was good to have him in the main. Then unfortunately he had bike trouble anyway. It was definitely a weird deal.

How tough is it out there right now with only four factory riders? I think there was four riders on the lead lap. You guys lapped 14th back twice, and then a few times three and more times.
It’s wild, honestly. I think we hit lappers lap five or six into the main. So, you’re coming up on guys really fast and then I guess they maybe don’t expect that. You just never really expect to lap up to fifth or so, but there’s a lot of dudes and a lot of kids are in the main that maybe normally wouldn’t be there. That’s really cool for them, just kind of doing what they need to do at the moment. But it makes it tough, because even Joe crashed on the start and was able to come back to fourth. So it makes the points spread obviously a little tougher. But at the same time, you’ve got to deal with the obstacles and that just happens to be one of them, that there’s a lot of lappers. It’s unfortunate. Sometimes they can get in the way, obviously like they did with Michael [Mosiman]. That obviously messed his race up a little bit. Definitely keeps you on your toes, to say the least.