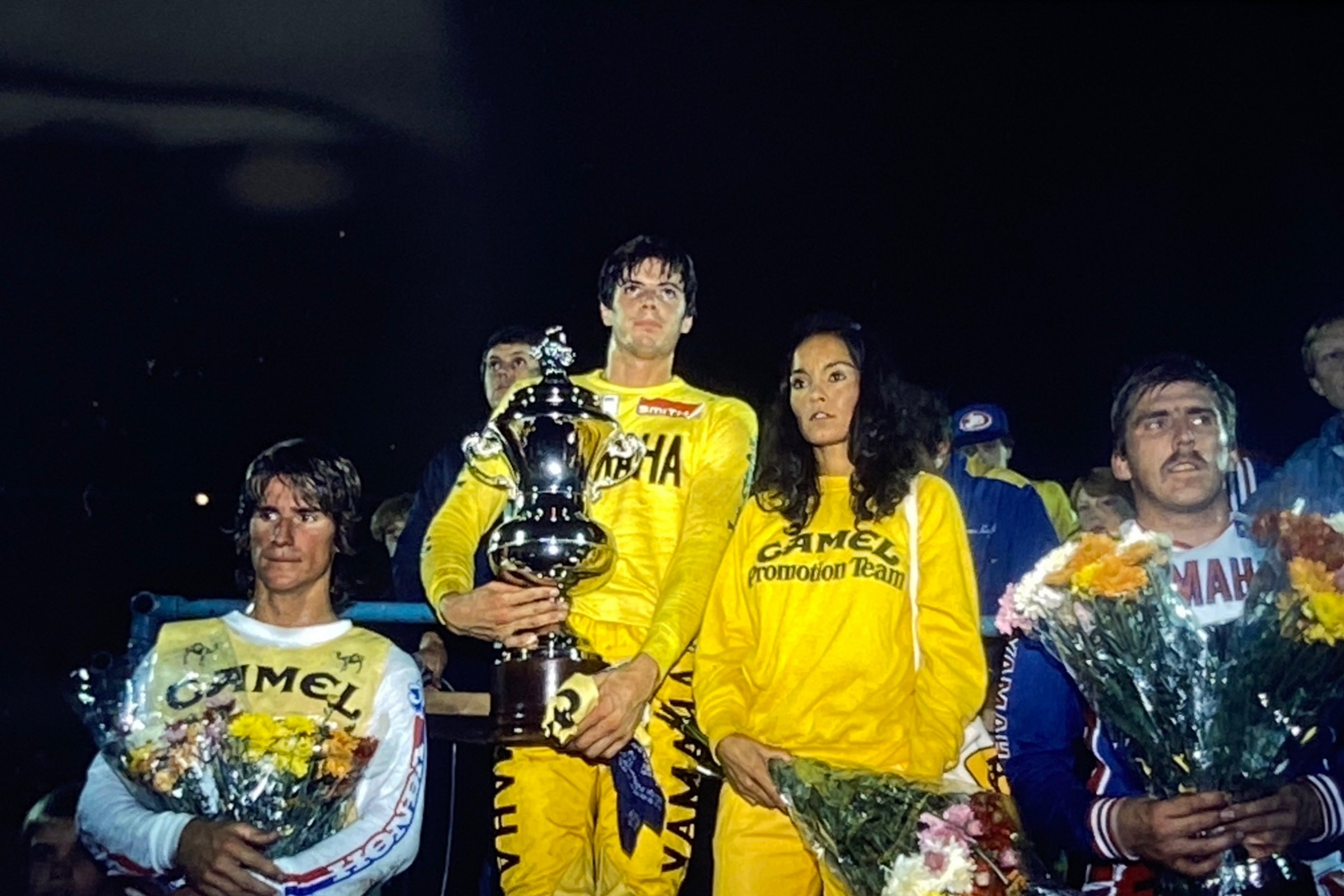 Mike Bell will be most remembered as the 1980 AMA Supercross Champion, but his career was a very rich and diverse one that took him to races all over the world. Born into a motorsports family, he didn't start racing until his was in middle school, but as soon as he did, he went all-in. Signed first by the DG Racing team and later as a Yamaha support rider, Bell built up an amazing resume of wins and accomplishments in a relatively short career of just eight professional years. With his tragic passing last weekend due to a heart attack while riding his mountain bike, we wanted to share some photos, win ads, and recollections of the successes of the incredibly kind legend, Mike Bell.

Bell's last win was an unlikely one—he topped the 1983 Dallas Supercross, despite being sick the week before. "I didn't even get out of bed until Wednesday," he told Cycle News' Karel Kramer. "Maybe a little rest helped me out." Bell was also helped out by the fact that the slick, rock-hard circuit inside the Cotton Bowl Stadium was so hard-packed that Cycle News called it the "Asphalt-O-Cross" race. But Bell was just fine with that. "The track is just like Ascot, which is where I grew up, so I have a lot of hours on this kind of dirt."

Check out just how slick it was right here:

In the fall of 1981, Bell visited Australia for the third straight year for the Stefan Superbowl of Motocross at Lang Park Stadium in Brisbane. (Stefan, by the way, was Stefan Hair Fashions, then the largest chain of hair salons in Australia, and it was called a "Superbowl of Motocross" after promoter Mike Goodwin's Los Angeles race, which the promoter Blair Shephard was copying, with Goodwin's blessing.) And Bell won for the third straight year, topping longtime AMA rival and friend Danny Laporte, as well as Australia's own Stephen Gall.

Here is some home movie footage:

The race also led to this very cool win ad from Yamaha.

In the span of two races in 1982 Bell won the Superbowl of Motocross at the Los Angeles Coliseum for a second time, as well as the Washougal 500 National. But that was at the end of the season, after Bell missed much of the 1982 AMA Supercross campaign with a knee injury, and the LASX would be his first win since the '80 San Diego finale, topping Yamaha teammate Broc Glover. He would finish 18th in the final SX rankings and fourth in the 500 Nationals, despite the knee problems. And the event in Los Angeles was called "The LAST Superbowl of Motocross" because the Los Angeles Coliseum was about to be closed for major repairs and upgrades before it hosted the 1984 Summer Olympics. By the time SX returned to the Coliseum in the fall of 1984, Bell had retired.

Bell's first ride as a professional in the Los Angeles Coliseum came in 1977 when the Yamaha-supported rookie finished a solid fourth overall behind Jammin' Jimmy Weinert, Marty Smith, and Steve Stackable. One year later he would return to the Coliseum and win an oddball race—oddball because promoter Mike Goodwin decided to add a water pit that made the track wildly slick. "Too Tall" used his long legs and his prowess on riding slick tracks to beat his teammate Bob "Hurricane" Hannah. The race became a mini film for Todd Huffman's MX Files, which you can watch right here:

Mike Bell's first Cycle News cover came in 1977 as a test rider for the publication, putting the new Yamaha YZ125D through its paces. Bell would only race a single 125 National as a professional, the 1977 Cycle-Rama round in San Antonio, Texas, where he finished fourth overall behind three fellow AMA Motorcycle Hall of Famers: Broc Glover, Bob Hannah, and Danny Laporte.

Throughout his entire professional career Bell raced Yamaha, except for one race—his first race in December 1976 at Anaheim, where he qualified for the main and finished 20th place aboard a DG Racing-backed Suzuki RM 250.

Bell is known for winning in AMA Supercross and 500cc outdoor motocross, but he was also a contender in the old Trans-USA Series (formerly Trans-AMAs), winning two of the five races in 1979 and finishing second in the series to Kent Howerton, and then winning a round again in 1981 at RedBud. Bell finished fourth in '81, the last year he campaigned the Trans-USAs before Yamaha and all of the other factory teams pulled out.

Mike Bell was also an innovator in European supercross. In the years before the Paris-Bercy Supercross really put the sport on the map in Europe, Dutch promoters held an annual International Supercross in a soccer stadium Amsterdam. Bell won there in both 1981 and '82, years that he might have been on Team USA at the Motocross and Trophee des Nations, had Yamaha supported the events during those years. Instead, the team was made up entirely of Honda riders and while they did a historic job in sweeping those races, those were the two best chances Mike Bell would have had to be on Team USA, as the '79 and '80 versions of the team both ended up canceling due to lack of interest.

French photo legend Pat Boulland shot these photos of Bell at the '82 Amsterdam Supercross. In the photo on the right, he is flanked by Jim Gibson (left) and Hakan Carlqvist (right) on the podium.

Bell closed the 1979 AMA 500 Nationals with a blistering charge, winning the last three rounds in a failed attempt to reel in points leader Danny Laporte of the Suzuki team. In three weeks’ time Bell topped Broome-Tioga (NY), Metrolina (NC), and St. Petersburg (FL) to close out the AMA National season—the best three-week run in his career.

Before Bell really made it big, he was well-known in California racing circles for his ability to ride well in just about any conditions, and that versatility served him well, whether he was racing up in the rough stuff at Mammoth Mountain or Friday and Saturday night races at Ascot Park. He was also a contender in the annual Olympiad-turned-ABC Battle of the Superbikers events, where his keen sense of traction and throttle control kept him in the hunt every time he entered.

And of course, there's Bell's championship run in 1980, which started with a weekend sweep of the doubleheader that started the AMA Supercross Series at the Seattle Kingdome. Bell would win seven rounds on his way to the title, a record for wins in a season that stood for many years.