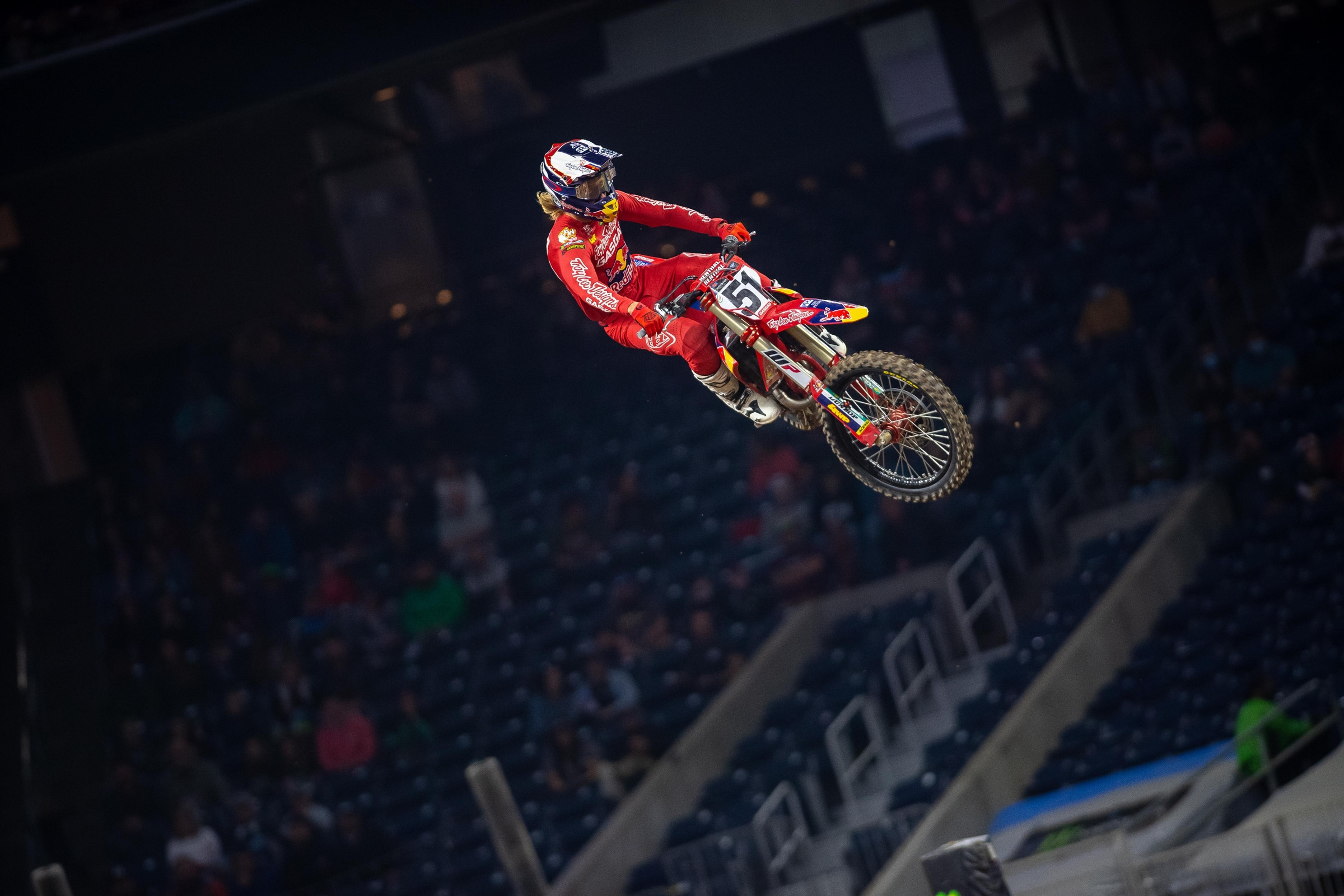 It may have been in a different state and different building, but the first round of the 2021 Monster Energy AMA Supercross championship ended up looking all too familiar to recent years. Even after switching to a new brand with the Troy Lee Designs/Red Bull GasGas program, Justin Barcia again found himself in the winner’s circle for the season’s curtain drop.

After the race, the media spoke with Barcia about his opening round victory.

Racer X: There’s been a lot made out of the opener being in Houston. We’re so used to Anaheim. There’s just that A1 vibe. Today did feel a little bit different. I’m just curious of your thoughts. Did Houston feel different to you at all?
Justin Barcia: Yeah, for sure. It felt a little different. It’s not Anaheim. Definitely, like you said, the pressure on Anaheim is a little bit bigger, especially it would have been probably a little bit bigger for me just because I won the last two years. So, it felt good to come here and not have that pressure. The three-peat thing was not even a thought. I had enough pressure just on myself doing that Anaheim video and stuff like that! So, I just had to deal with that pressure and stuff. All in all, it was a little different vibe but honestly, I was just stoked to be here racing with some fans.

After the finish, hanging out with the team, watching you shake your head, and the reaction was like you almost couldn’t believe it. Talk about that a little bit.
For sure. It was definitely a lot to take in. It was an intense race. Me and Kenny checked out and he kept the pressure on me, and I made a few little mistakes. All in all, it was just a really intense race. The off-season training went extremely smooth. The transition to the team went really well. So, I felt really good. Then coming in, you just don’t know where you’re at. I know I can win, but there’s more to that. It was definitely a lot of emotions to take in. We put in a lot of work. It feels really good. I was really, really happy. It’s a lot to take in. A lot of people are like, “Smile!” It’s just a lot.

For a first race on a new bike, obviously I think you have to be happy with that result.
Yeah. I’m really stoked on the result. Winning was great. If I would have got third tonight, that would have been great. If I were to finish top five, it would have been great tonight for me. But to win it was awesome. I was really stoked on my starts. I’ve always been a really good starter, but the past five years it’s been difficult. So tonight, to rip starts on my bike and stuff was cool. I felt really good riding. I felt like I could throw the bike around and kind of do whatever I wanted. It was cool to have Kenny pushing me the whole time. We were definitely going for it. It was a rad first race.

The three guys on the podium tonight, two of you guys were running the air shock. What do you like about that thing? What’s different about it?
It was definitely really hush-hush before the season. I got to test it and then it kind of went away for a little bit because we were waiting on parts and stuff. Then I went back to my spring shock and then back to air shock probably three or four weeks before the season. It’s just very consistent. You don’t get any fade like a spring shock. There’s definitely some positives to it versus a spring shock. I’m super stoked to have it. I’m glad the whole KTM brand and WP figured that out. It was cool. Roger [De Coster] actually did a lot of work on it. I would see him in the shop. I spent some time in the shop and he would be in the machine shop making parts for it and stuff so we could ride it. It’s been a cool experience with that. That was really the only thing we were testing was a little bit of suspension stuff all off-season. It’s really good.

It seems like this point in your career, even though you made this switch, and you love the bike and it worked out well, until you raced tonight was there still that little bit of a doubt where you had to basically make this happen to be like, okay, I made the right decision?
Yeah, for sure. At one point I lost a little bit of belief, all the years of struggling. I knew I’ve done all my off-season training. I kind of know what to do now. I’m 28 years old. So, time to do it or not. It was weird coming in. Like I said, the off-season went really smooth and easy, and then get here today. Once I won that heat race, I was kind of like, whoa, that felt really good and relieved some pressure. But the main event was sick. I felt like I definitely needed to do that tonight. Like I said, I would have been happy with any podium position, but to win it is just kind of icing on the cake. Like Kenny said, it’s the first race. He probably could have made a pass there, but also, we might have both went down. We’ve grown up a lot and we’ve got a long season ahead of us, so we need to be smart. He kept me on my toes, for sure. He could have put me into a mistake. So, it was a good race.

It seemed like you were really trying to downplay the three-peat thing, and then that video came out, which I think you had shot that a while ago, it probably ratcheted the pressure up. You also weren’t really going out of your way I think to build up, “I’m going to be a totally new rider on this bike.” I feel like you were trying to downplay things. So, was that your plan going in, to try to take the pressure off and not make any bold statements? Then the video came out that kind of did it for you!
Yeah, definitely. I wanted to keep the pressure off as much as I could and just do my work and put my head down. Then Troy [Lee] hit me up and was like, “Hey, we want to do this video.” Then Jeremy from Red Bull was super [all] about it. I couldn’t say no! It was really fun, really exciting. I loved every moment of it. I think it was great. But on my side, it was definitely more pressure. Once it was fully released, I just stayed off of social media. There’s no need for me to go on there and see people being super negative or rude or just whatever. Social media is not a great place nowadays. I know some people were really stoked on it, and other people weren’t too happy about it. I definitely wanted to keep a cool, calm off-season and that definitely ramped it up and didn’t do me any favors. I’m glad today went how it did so I could, what's the saying? Shut the haters up, I guess. It is what it is. Like I said earlier, it’s a long season. I want to be there through the whole thing. Racing Kenny tonight, that was really rad.

Was there a certain moment when you were on the track where that pressure goes away and you’re like, “It’s not talk or hype or anything like that anymore. I’m just racing my dirt bike and we’re back to what we’re used to.” Does that happen?
Yeah. I felt phenomenal in press day, but the pressure was still there. Felt great in practice. I haven’t qualified like that or had good starts like that a lot of times, so I felt good there, but the pressure was still there. Heat race was better. It made me like, 'Okay, you’re in a good spot. It will be a good night. Whatever happens, happens.' So, after the heat, the pressure definitely was a little less.

You said your starts haven’t been good in a while. Is this a bike thing?
Yeah. It’s a bike thing, for sure. The bike is really good. Steel frame is sick. The engine, the power of it is incredible. I got on it and I never tested anything with the engine. I just rode what they gave me. It’s a really good bike. The whole KTM brand, GasGas, Husky, they do a really good job. I’ve always been good at starts. On 250s I was great. The bike was good then. Then I struggled a lot. This bike fits me really well. It’s skinny and it’s a rocket off the gate. Not like a rocket like loop out, just it goes.

This is obviously your third opening round win in a row, three years straight.  Do you feel like this package with the GasGas with the TLD team it’s going to enable you to carry that form across the 17 rounds better than in the past?
Yeah, for sure. Honestly, I don’t really look back at the past. I just look at the present. This team, I’ve really enjoyed working with the guys. It’s been extremely fun. Also, very serious, but fun. The motorcycle is a great fit for me. It’s skinny. It’s light. It’s got a good power band. Obviously, I’ve got kind of a tendency to go from zero to a hundred on the throttle, so I still need to be smooth and have to ride the bike good but all in all it’s a very forgiving bike when you make little mistakes and stuff. I just think it’s a great fit for me. I’m glad I made the choice. Just looking forward to the year. I think it’s going to be fun.