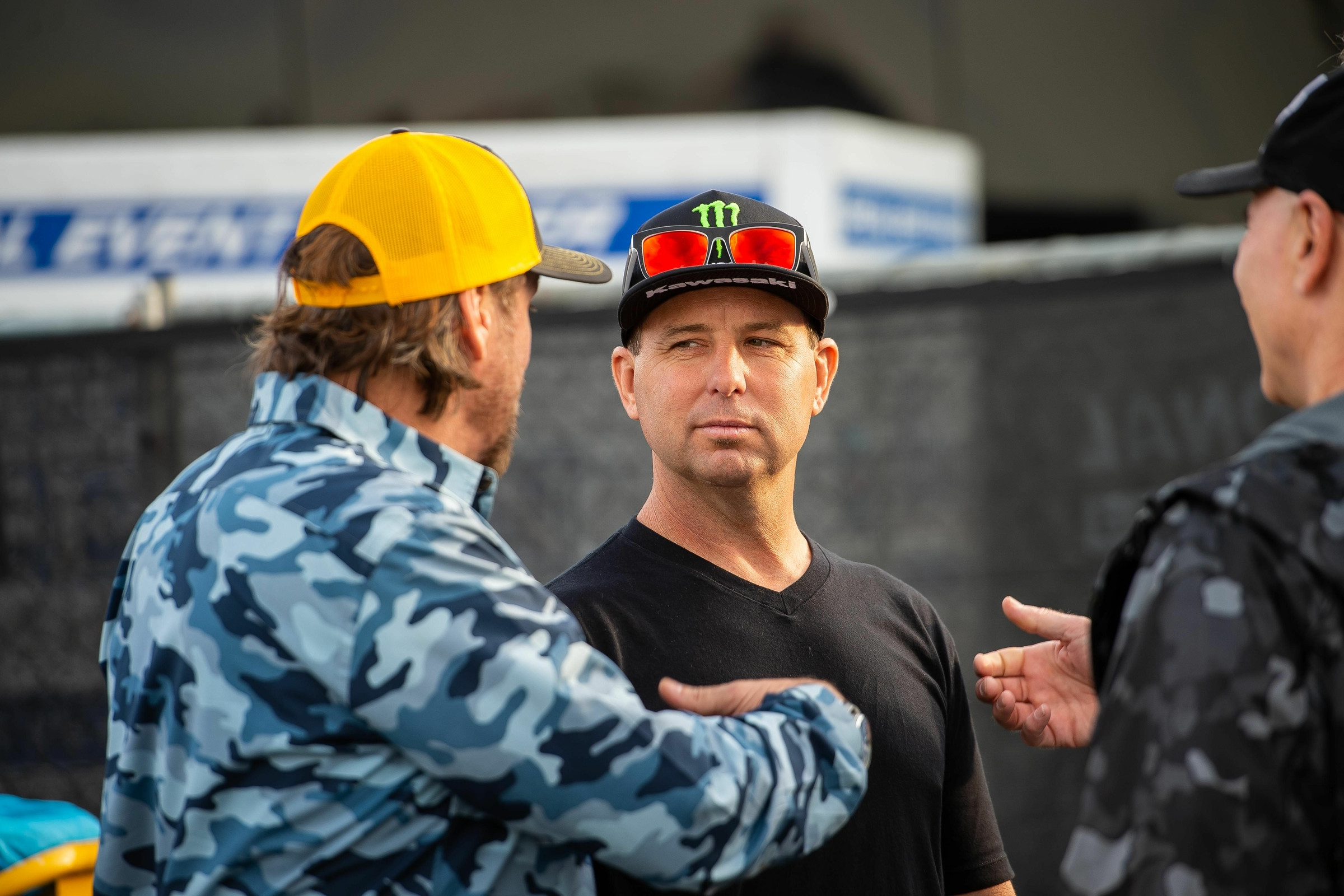 On Saturday morning, May 17, 1990, I climbed into my Volkswagen Jetta and motored out of Redondo Beach, California, up the I-15 North, and onto 7000 East Russel Road and then to the 32,000-seat Sam Boyd Silver Bowl in Las Vegas, Nevada. That evening, by myself, I sat up in the stands along with 18,196 other supercross fanatics and watched a little-known kid on a Team Green Kawasaki KX125 handily win that night’s AMA 125cc West Region Supercross Main Event.

Read the Cycle News story headline that Monday: Kawasaki Team Green’s Jeremy McGrath kept the St. Patrick’s theme alive in Las Vegas by leading the 15-lap 125cc West Region Main Event from start to finish. “I pressed hard for the first few laps and from then on paced myself,” teenaged McGrath told Cycle News. “It’s so much easier to win from the front.”

Thirty-one years removed from the very first of 89 career supercross main events Jeremy McGrath would nail down during his extraordinary supercross career, on Friday afternoon in Southern California, I punched in the required digits on my iPhone and let it ring. A few beats later, one Jeremy McGrath picked up on the other end and our mission to provide supercross fans the world over with a preview of the 2021 Monster Energy Supercross Championship was initiated. Nothing but the greatest stadium motocross racer who ever lived and some sort of racing journalist bench racing over just might play out beginning with tomorrow’s season opener at NRG Stadium in cosmopolitan Houston, Texas.

Racer X: Okay, my friend, first and foremost and before I burn your afternoon down, how is Team McGrath doing here on the eve of the 2021 Monster Energy Supercross season?
Jeremy McGrath: You know what? We’re good. Kim is in Atlanta with her mom doing store work for her shop down here. She’s been over there, so I’ve been home with the girls and just charging dude. I’ve been trying to get my race car all ready for King of the Hammers (Note: Brutal off-road race staged in the desert region of Johnson Valley, California). We’ve just kind of been putting in long days, but it has been fun. We’ve been chilling. I’m getting it done.

Fantastic. Quality time with your daughters.
Exactly. And I’m excited supercross is coming up!

And that’s exactly why I’ve stalked you down this Friday morning. If anyone is qualified to provide us a sort of fly-by snapshot on what’s about to play out here beginning with the Houston race tomorrow night in NRG Stadium, it’s the Babe Ruth of our sport. I mean as tough as everything has been, I think ALL if us are absolutely thrilled that there is a race on Saturday! It's weird, right?
It is a little bit weird, but I’m super-pumped because it’s going to be three racing days right in-a-row. This whole midweek racing-thing, I’m kind of liking it. I’m excited about that.

Sort of like Monday Night Football, huh? Turn the TV on, kick the feet up and watch supercross from a world class sporting stadium.
Yeah, and you know what is funny? Everyone is calling me. Just my friends. Not industry people. My friends are calling me and asking, “What do you think? What do you think about supercross? What’s going to happen?!” To be honest, I’m sitting here and thinking about the whole field and I’m not even sure I can pick a winner. There are so many good guys this season! Not like one person got better than the other, but it seems like all of the guys seem like they are very, very close in speed. It’s going to be a great season, I think, as far as competition goes.

I know! It all snuck up on me. It totally reminds of the 1983 Wrangler Supercross Series where David Bailey, Mark Barnett, Bob Hannah, Broc Glover, Jeff Ward, Johnny O’Mara, Ron Lechien, Brian Myerscough, Warren Reid, and Mike Bell all lined up against one another. I was at some of those races. It was the best, most competitive racing of my lifetime.
Yeah, yeah. Exactly. Every single year, with all of the riders, it’s like, “Oh, I’m feeling the best I’ve ever felt! My bike is better than ever! I’m in the best shape! I’ve been riding well!” It’s all the same. We’re never going to get the truth, anyway. That’s the same thing we hear every year. Even today, I was talking with my daughters Rhowan and Bergen and they are going to do a Fantasy Supercross pick they’re like, “Dad, what do you think?” I replied, “Man, I don’t even know!” My personal opinion is that I think Adam [Cianciarulo] is going to be much stronger than he was last year. If he can get more consistent, then he should be able to be in the hunt. Ken Roczen. I’m a fan of Ken Roczen and last year he felt like one of the strongest guys, but I’m not sure I feel that way this year. Obviously, I think Eli is going to be good. It’s probably going to take him a few races to get going. That’s normal. That’s the way it goes for him. Cooper Webb, I think he’ll probably start pretty fast. Zach Osborne is another guy that has a lot of confidence after the outdoor series, but I also think that he’s kind of a guy that it’s going to take a little bit to get warmed up. And then you take a guy like Marvin Musquin who hasn’t been in there for a while and where do you out him? And my other dark horse is, and to be honest, and it feels a little weird to say this, Justin Barcia. I think Justin is going to be strong on this GasGas.

You know who else I believe is a sleeper in the field? Malcolm Stewart.
Yeah, I said that to my kids. I said, “You know, Malcolm will be pretty good.” I just worry about his consistency level. He is a great rider. The guy has got some talent and he is strong. That will suit really well with that Yamaha bike. That’ll help. You know, I think Chase Sexton is going to be strong, too.

I know! I wanted to ask you about Chase. I haven’t met him yet, but with his role at Honda and the momentum and interest that seems to be building behind him, he reminds me of Jeff Stanton back around 1988 and 1989. When Stanton went to HRC Honda in 1989, well, we all saw wat happened. He was amazing!
Yeah, Stanton was pretty quiet. I think this kid has a lot of talent. He has a lot of talent. I think matched with his ability and his talent and he is on a great team, I think he could be surprising us; you know? I think for some reason, I think he could probably battle with AC. I don’t know.  It’s the very first race. Man, you just never know!

Where are the bikes at? How dialed-in are they?
Oh, I know that Kawasaki has been working hard. I think their bikes are pretty good. I think it’s the same for everybody. I think it is the same for everybody. We haven’t heard much because it has been really quiet because there hasn’t really been any overseas racing. There hasn’t been anything in the off-season, so it has been pretty quiet. I do think they’ve all been working hard, though.

Everything is an absolute blank canvas and a complete toss-up. Can any of the racers you can think of actually take advantage of this odd and extraordinary situation?
I mean, I think someone like Jason Anderson can probably take advantage of something like this last year, he was, what, fourth in points or something?

Yes, exactly.
Yeah, a distant fourth. He struggled. This could be a bounce back year for someone like him. But what do I want to see in 2021? I want to see Adam winning. A lot. I don’t know, man. In a weird way, I think it could be a changing of the guard already.

Four-fifty SX rookie Dylan Ferrandis. I can see him sneaking right into the mix. Thoughts on him?
Yeah, he’s the only guy that I hear news about. I heard that he was hurt and then he had surgery. I’m not exactly sure on a scale from 1-to-10 he is starting the series at. That does worry me for a guy like him, but I know that he’s talented and he can sure mix it up. If he’s healthy, I think he can be there.

How about all of the racing equipment? All the teams get to Houston and go out for practice and the bike is off or something is not working correctly. How do the teams adjust and get to things? I mean, everyone is going to be held hostage in Houston for a week as three races have to be run. How will everyone adjust to all this?
I think for the riders that are way off, it could be a problem. I think the guys that have a pretty good setup will be fine. A lot of times that first race is just sort of about finding out where you’re at and where you belong. I think everyone comes out firing—or at least they should!

That’s a very good point: With all the uncertainty going on as I even write this thing and with COVID still omnipresent here in the United States of America as the race teams set up in Houston, who even knows if the entire duration of the series will run. I mean, do the guys go out there and try to win and amass as many points as possible in the event the series gets interrupted or even stopped?
Yeah, that is true. I mean the outside elements can play a factor in this thing. Let’s say they have an issue and call this thing halfway, if something like that happens, you don’t really have these throwaway races like you would if it was an 18-round series. You’re right. I mean you’ve got to kind of race like it’s almost a seven or eight round series and go from there.

Let’s say seven-time AMA Supercross Champion Jeremy McGrath was able to transport himself back in time and be behind the starting gate tomorrow night in Houston. How would you be dealing with this 2021 season?
Well, I think right away that quarantine leads right into a guy being in great shape and getting a lot of great practice, right? If I was going into this thing, I’d be like, “Look, I’ve had plenty of practice. The bike is good. The team has had time to work on the bike.” I think I’d be as ready as ever. In my mind, and as a fan, we’re going to see some great racing. We’re going to see a lot of good stuff. Pretty crazy!

Here’s a question for you: Who will win on Saturday night?
Who I think is going to win the race?

Exactly.
I’m not sure. I would only say that I hope that Adam wins, but I would say that there are 10 guys that are going the same seed, so the guy that gets the good start is going to give himself the best chance. Hey, you want to pick a top five?

Totally. Let the world know what you think!
Alright, top five: Adam, Cooper, Eli, and I’m going to go with Roczen fourth, and I’ll go with Barcia fifth. Sexton will be sixth.