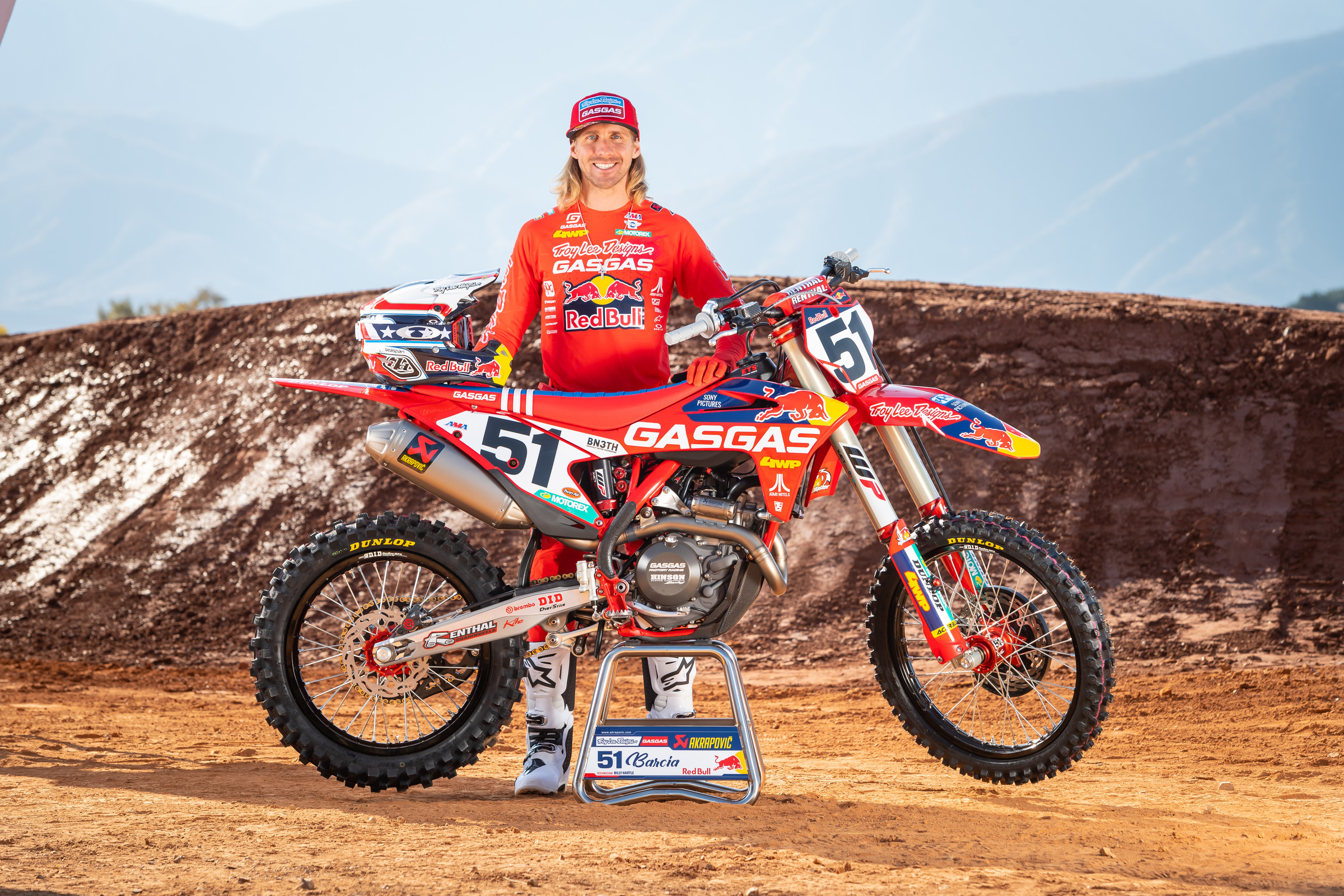 The hype should be all over Justin Barcia for 2021, as he’s the highest profile rider to switch brands for the new season. He also won the Monster Energy AMA Supercross season opener the last two years, which means even more hype before round 1. Oh, and there was that fake Anaheim 1 video. More hype.

But that video was just a marketing stunt. You sense Barcia doesn’t exactly want to over-hype his 2021 campaign, as instead of going with the “best shape of my life/two seconds a lap faster” off season cliches, he kept it pretty level when we interviewed him at last Thursday’s Troy Lee Designs/Red Bull/GasGas Factory Racing team intro.

There is probably a quiet confidence for Barcia this year, but he’s well aware the only way to prove it is to do it on race day. Here are his thoughts heading into the new season.

Racer X: Okay dude, there's a stigma. I'm not naming any specific brands but other riders have switched from one brand to one type of bike and it's worked out well. So it leads to some high expectations for you. Are you like, “I’ve never felt better this is unbelievable I'm going to crush it mode?” Are we there?
Justin Barcia: I feel good, I'm happy. I've had a good off-season, lots of riding. The bike's good, it's uh…it's a steel frame. [Laughs] It’s good, I like it. It’s not like back-in-the-day believe-the-hype. I don't know, I'm just having fun.

Well that's what I'm getting at. You're feeling good but you're not trying to over-hype this right now?
There's no reason to. Just a good bike and a good team and now we have to perform. No big deal!

What's funny is I know that last year you were saying your off-season was a bit of a grind. You said you were the solo test guy and you kept saying how much riding you did and how much testing you did on the Yamaha. We’re back in that boat again because it was a new bike for you, or did this thing kind of work for you pretty quickly?
No it worked pretty well right away. We had a few little parts. It was more of just getting it comfortable, not even really switching parts, like just bar position and getting used to the bike.

That’s really it?
Yeah. Obviously suspension, we worked on it, every rider has their preference, but I think we’re all pretty close, all the KTM, Husky, GasGas guys. There wasn’t much to it, just putting in laps and finding my comfort zone, and honestly that happened pretty quickly.

So you didn't have to have piles and piles of parts to try and try and try?
No.

Have you had to do that before?
[Laughs] Yes!

So it wasn't really a grinder of an off-season?
No it's been pretty good, it's more like me wanting to just ride a lot. So they kept telling me “Hey, it’s still early, chill out a bit.” So it was good, it was a good offseason, I enjoyed it.

Last year's schedule was all messed up. Did you get breaks somewhat built in or did you feel kind of smoked at the end of the year?
Coming in, switching from one brand to the other, I had to take off some time just going from one contract to the other. But I still ended up riding four weeks earlier than some of the other guys. So that’s why I had to take a break between that, and then start winding down before the season. But I feel ready to go racing for sure.

Right but the way last year went, it didn't leave you burnt because it went to October and you didn't know when the series was gonna start or anything like that?
I don't know. After Salt Lake City for me, yeah, I was pretty mentally burnt. It's like we're in the championship fight and then it fell apart on us. So I took a break after that for sure. For this year, yeah it was definitely weird not knowing what was going on and things like that but I'm just glad they put together a series for us and we're gonna get to go racing.

Okay the fun thing that GasGas kept building up today. I didn’t know anything about it at first. At first I’m just looking at a team and a motorcycle, before we knew anything about the branding plans, but it kind of works for your personality.
Yeah at first it was just like, you know there's a GasGas factory racing team and it's Troy Lee Designs, that’s cool, that's fun, but no, I didn't know. Nothing was like, built up yet really. Then I got here and it was like “This is going to be the fun brand of the KTM company.” It's perfect. I want to have fun, win races, and be a title contender. We’ve done a lot of fun things, even though we were in lockdown and that’s made it difficult on things, but there’s some stuff you’re going to see over the next few weeks. I think people will be stoked.

[Note: After this interview, the Troy Lee Designs/Red Bull/GasGas team released a wild video faking the 2021 Anaheim Supercross that will never happen. You can watch the video below.]

The opener thing. Is there anything to that? Are you the opener specialist or that just is that a coincidence? Is there something in Houston we can look at?
It’s so blown out of proportion. I mean I guess I'm good under pressure, I don't know, it all just worked out for me. Two years ago we fought through the pack and took the win and then last year just everything, the track was good, it clicked for my bike and it clicked for me and I won it. Sure I'd love for everything to click at the first round again, yeah you go there to try to win, but you also don't want to lose too much…you know what I mean?

You mean you're not measuring your whole season based on the opener?
Right, right. If I don't win the first race that’s fine, I'll sleep fine at night. Would I love to win the first race again? Yeah if we were going to Anaheim I think there'd be probably be a lot more pressure on me than there is now so I’m maybe glad we're not…well, I’m not glad we’re not going to Anaheim because I love Anaheim, and it's a special place for me. It’s been good to me.

I see what you mean though. There won’t be as much, “Can you win it again?” talk because we’re not even there.
No. It’s a completely different place and a different vibe. I like Houston, but whatever happens, happens. I just want to put myself in a good place for the long series.

I’ve been asking this of every rider. You will not have the comfort of your factory test track after the opening round the day after Houston 1. Are you nervous about that at all?
Honestly I haven't really put too much thought into it, no. We have two tracks here at KTM, I've ridden a lot of different stuff on my same setting and my bike works well. Obviously racers get kooky after the first race. Obviously we’re not gonna be able to test during the week and stuff like that, but for me it's okay because we have the KTM, the Husqvarna, and the GasGas brand, all similar setups, similar bikes, so we should be able to feed off that and feed off each other. Those guys have a lot more years on the bike so they'll be able to know maybe what they need, and if I’m searching for something I can go to Rog [Roger De Coster] or talk to TK [Tyler Keefe] or whatever, so I’m not too worried about that.

You had highs last year. You didn’t have a bad season. You were in title contention heading to Daytona. What seemed to be the problem is some things were great and then other things, like Salt Lake City, were not great. So our theory is that you might be more consistent across the board, track to track, now. What do you think about that?
Well I think this motorcycle in general is more consistent. I don’t know if it’s the steel frame, the way it delivers power, the suspension, whatever you want to say, it’s more consistent. It gets starts, too. What a lot of people don’t really know is that last year we were searching right away after the first race. We knew there was there were things we needed to fix, and we were testing insane during the week throughout the whole entire series. You know it was kind of a new team last year. We put together new guys and we had a good crew but we just ran out of time. When we got to Salt Lake all the little issues we had on the tacky tracks and stuff like that, or like  A2 where we had like a ninth place, a lot of things that showed up there, that was just Salt Lake City pretty much for however how many rounds we were there. We didn't have somewhere to go test when we were in Salt Lake City. Not sure that would have helped us a lot, it would have helped us a little bit. We just didn't have the capabilities and the support behind us to fix the bike.

I asked only because you said the bike worked good at the Anaheim 1 track. So it seemed like some tracks it was good and other tracks it was not.
Yeah that's kind of how it felt. You just didn't know what you were gonna get. This bike's really consistent, it adapts to the tracks well, slick, tacky, whatever. Now, a lot of different tracks are going to show up versus the three California tracks we’ve been riding, but I just feel like with my experience and all the years I've been racing, I should be able to pick up on that stuff and be good and use the resources I have around me to, you know, adapt to those things. So, I feel good about it.