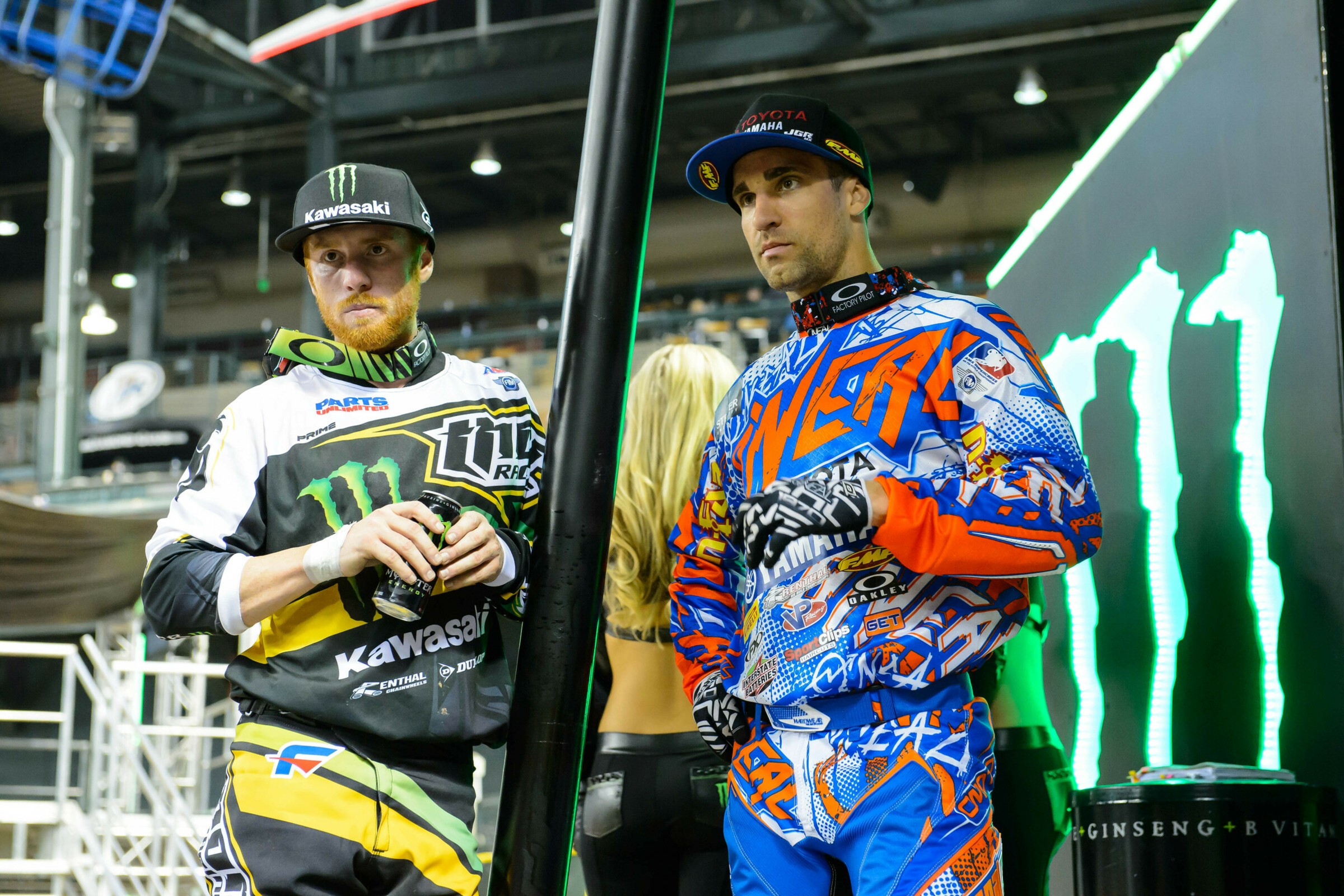 Myself and Steve Matthes have started a new podcast where we review old races. I’m not sure if that sounds cool or not, but I can tell you when we have a lot of fun with it because stuff isn’t nearly as serious once you put some time between yourself and the moment. So we get to laugh and bench race about events that were very big deals at the time, and riders reveal more now than they would back then. You can check out the pod by searching “Reraceables” where you get your pods—or by going to the Re-Racables Podcast Podbean page directly.

We covered the 2005 Anaheim 1 Supercross in our first episode, and this week we launched a 2014 Phoenix Supercross show. Phoenix 2014 is best known as “The Race Brayton Almost Won.” The then-JGRMX Yamaha rider led most of the main, lost the lead to Ryan Villopoto, and got close enough to show Villopoto a wheel on the last lap. Brayton decided not to go super dirty to try to get his first 450SX race win. Should he have tried to take Villopoto out to steal the victory?

Some scenes from the 2014 Phoenix Supercross.

“I definitely could have, but at the time I was thinking, ‘Okay, it’s only round two,’” Brayton explained to us. “It wasn’t a coincidence. I had felt good all pre-season with the JGR guys. I was third fastest in practice, I think. I just felt good and I thought it wasn’t going to be my only chance. I thought second was awesome and I had led a ton of laps, which was great. If I had tried it, it would have had to have been super aggressive, to the point where maybe we both go down, and then we’re 12th and 13th. So to get second and go back to the guys and go back to work, we were stoked. But looking back with hindsight, knowing I didn’t get another podium that year and ended up getting injured, now I think I would take that shot!”

Brayton has always been strong in whoops, and it’s that section of the Phoenix track that helped him stay at the front.

“That year we ran Pirellis [tires] and in pre-season testing the rear Pirelli tire was insane, especially on hard pack,” Brayton says. “It was good for me because the whoops stayed big all night, they weren’t jumpers. You had to enter them fairly fast, but if you could pick up some speed, which I did, you could make up time. That tire was good, but also that year, people forget, the Yamaha was good. I think I won several heat races that year, I was top three in points after like round six or something. We had that bike good that year, it was dialed.”

The next weekend at Anaheim, Brayton actually passed Villopoto for the lead in a heat race and went on to take the win. He finished fourth in the main event, just behind a historic battle with Chad Reed, James Stewart, and Ken Roczen. For much of 2014, he was going to another level and battling the big names.

“It was frustrating for me at times, because I was beating those guys or running with those guys at times, but maybe I just didn’t have the name, but I feel like I was over performing for what I was getting paid for at times,” says Brayton of his time with JGR. “I won heat races, even got podiums in motocross races which wasn’t even really my thing. I felt like they [JGR] were always looking over my head for who was next, and I was always thinking, ‘Hey, I’m right here. We’re doing alright.’”

Now that JGR is closed, he looks back and realizes how great the scenario was for him. Brayton still lives in North Carolina, and that’s where he met his wife and raised a family. His JGR results set him on a course he still enjoys today.

“I enjoyed my time. I’ve texted back and forth with Coy [Gibbs] a couple of times lately,” Brayton said. “I’m super grateful for him and the team. It ultimately changed the course of my life.”

There’s another part of this race that has become good comedy. Heading into the 2014 season, Justin Barcia was expected to be a front runner and challenge Villopoto for the SX title. Barcia looked super fast at Anaheim 1 but suffered a bad start in the main and finished fifth. He was an easy pick to win Phoenix, since he won the race the year before, and then Barcia won his heat, started strong in the main, and started closing on Brayton for the lead. Everyone on earth expected him to get around Brayton and take off for the win…but instead it was Brayton who got aggressive with Bam Bam. When Barcia tried to pass him, Brayton took him wide into the Tuff Blox. After that, Barcia started making mistakes and falling through the pack, while Brayton maintained the lead.

Watch Brayton’s move on Barcia in the highlight video below:

I coined the term “Transfer of Power.” Brayton had Bam-Bamed Bam Bam, and took his mojo. It was so non sensical and ridiculous that the term actually became popular with our podcast fans.

“I do still hear this Transfer of Power theory to this day,” Brayton laughs. “I can still picture that right hand, 90-degree turn onto a table [where he bumped Barcia]. For some reason that track that night, it was somewhat one lined, but the biggest thing was the whoops. If you could get through those clean it was everything. So I was like, ‘I cannot let Barcia get in front of me right here because I’m good in the whoops. If I could just stay in front of him before we get to the whoops, then pull away a bit in the whoops, this could be a good night.’ So when he got next to me in the corner, I ran him wide. Then Weege come up with ‘Transfer of Power.’”

Unfortunately for Brayton, this race sticks out because he never quite got that close again.

“Lots of top fives that year, just never got in that position again,” he says. “In 2012 I had almost won several races on a Honda. Indianapolis I led till lap 17, Villopoto passed me with three to go. Toronto I led for a long time and Villopoto passed me. I could never quite seal the deal on that Villopoto guy!”

We all know now that Brayton would later get that elusive victory at Daytona in 2018. That probably takes the sting out of the so-close second at Phoenix four years earlier. Still ended up being a memorable night, though.

Listen to our Re-Racables Podcast on the 2014 Phoenix Supercross below: