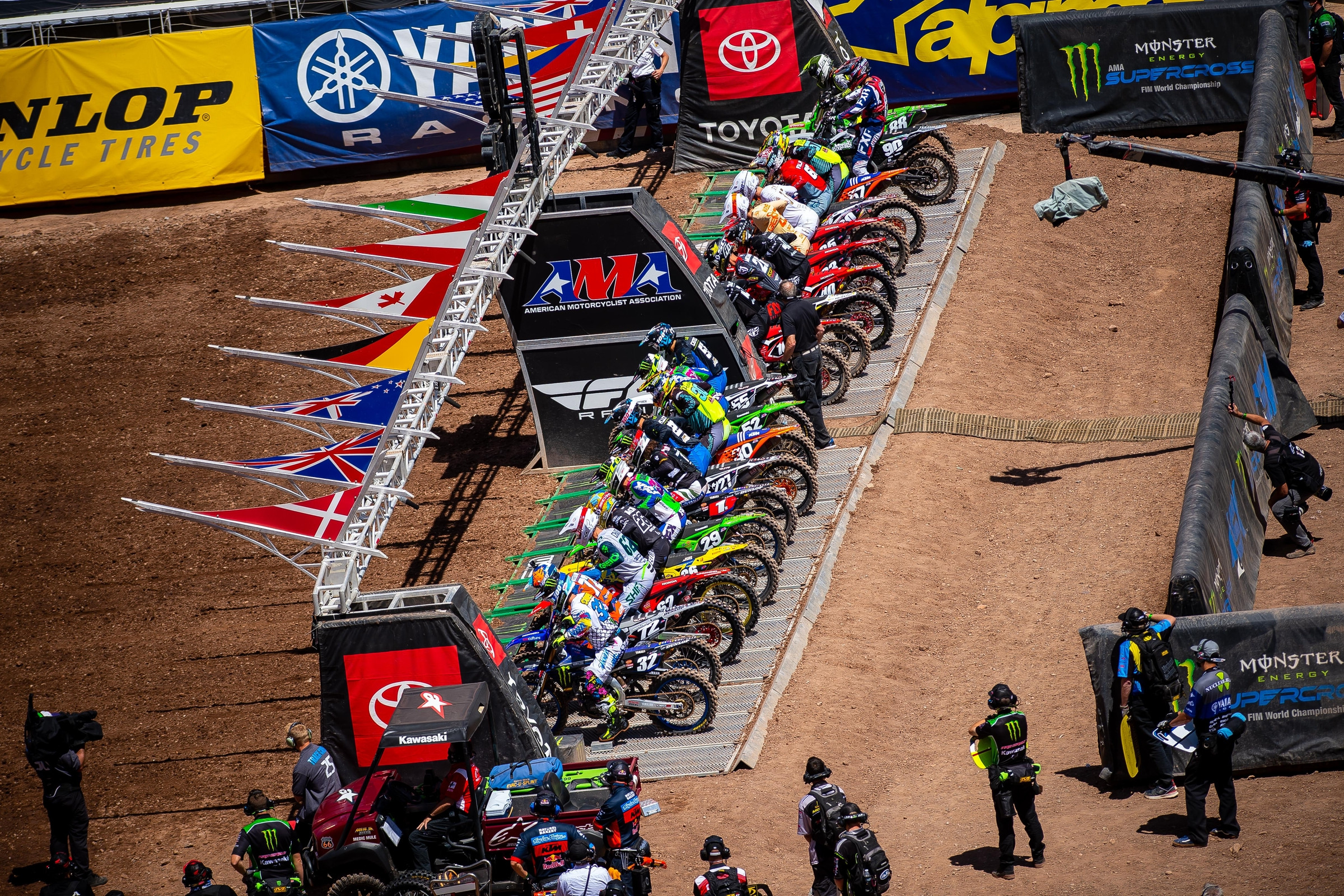 Feld Entertainment has released the first, full 17-round 2021 Monster Energy AMA Supercross schedule. Yesterday, we had learned the Glendale, Arizona, rounds were going to be impacted because of State Farm Stadium has cancelled fan attendance for the two remaining NFL games for the Arizona Cardinals, meaning fans would not be allowed to attend events at the stadium until further notice. This impacted the three Glendale rounds initially scheduled for February 20, 23, and 27 (rounds seven, eight, and nine initially). With those three events canceled in Glendale, the seventh, eighth, and ninth rounds were indeed moved. Now, round seven and eight will be held in Orlando, Florida, at Camping World Stadium on February 13 and 20. This stadium hosted 13 450SX Class races and 11 250SX Class races from 1983 through 2007.

The ninth round will become the 51st Daytona Supercross on March 6 at Daytona International Speedway. As planned, rounds 10, 11, and 12 will be in Arlington, Texas, in AT&T Stadium before rounds 13, 14, and 15 will take place at Atlanta Motor Speedway in Atlanta, Georgia. Yes, Atlanta Motor Speedway, not the NFL's Mercedes-Benz stadium downtown. The 16th and 17th rounds will both take place in Salt Lake City, Utah, at Rice-Eccles Stadium. Both the 250SX East Region and 250SX West Region will feature nine rounds per championship and the only East/West Showdown will be the finale in SLC.

Below is the full press release from Feld Entertainment.

Ellenton, Fla., – Feld Entertainment, Inc., today announced the complete schedule for the upcoming 2021 Monster Energy AMA Supercross, an FIM World Championship, season. The three rounds originally scheduled for Glendale, Ariz. were removed from the schedule and the series will now split those races between Orlando, Fla., and Salt Lake City.

State Farm Stadium in Glendale is a tremendous partner and the Arizona fans have strongly supported Supercross since 1999 but current attendance restrictions and local health mandates have created a difficult environment in which to plan this far in advance. We hope to return to Glendale in 2022.

The Atlanta Motor Speedway now joins a small list of venues in Atlanta to host Supercross dating back to 1977 at Fulton County Stadium. When the Atlanta Motor Speedway opened its doors in 1960 it became the seventh superspeedway in the country and now joins just Darlington, Charlotte, and Daytona as one of the original seven still in operation. The April triple-header will be a first for the speedway and a first for the Atlanta market.

All 17 rounds of the Monster Energy Supercross season will feature a standard race format as Triple Crown events will be put on hold until the 2022 season.

Tickets are currently on sale for the first six rounds in Houston and Indianapolis. Additional on-sale ticket information will be forthcoming and fans can stay up to date by visiting SupercrossLIVE.com.

FanFest is currently scheduled to take place in Houston, Orlando, Arlington, Atlanta and Salt Lake City as these venues provide adequate space to feature the race team rigs, Monster Energy exhibitions, photo opportunity set ups, food and beverages, plus authentic Supercross and racer merchandise sold via contactless shopping. Ticketed patrons will be allowed to move between the FanFest perimeter and the stadium to watch qualifying at designated times.

Supercross has implemented enhanced health measures to help ensure the highest standards of wellness when it comes to today's live experience. Seating capacity will be reduced at each stadium with a Pod Seating structure, which will allow family and friends to safely enjoy all the action while social distancing from other groups in attendance. More information about each stadium’s safety protocols can be found on their individual websites - NRG Stadium, Lucas Oil Stadium, Camping World Stadium, AT&T Stadium, Atlanta Motor Speedway and Rice-Eccles Stadium. Unless otherwise exempted by law, guests age 2 and older must wear a face covering except when actively eating and drinking – local venue rules also apply. View more information about Monster Energy Supercross’ Fan Wellness.

Below is the full schedule.