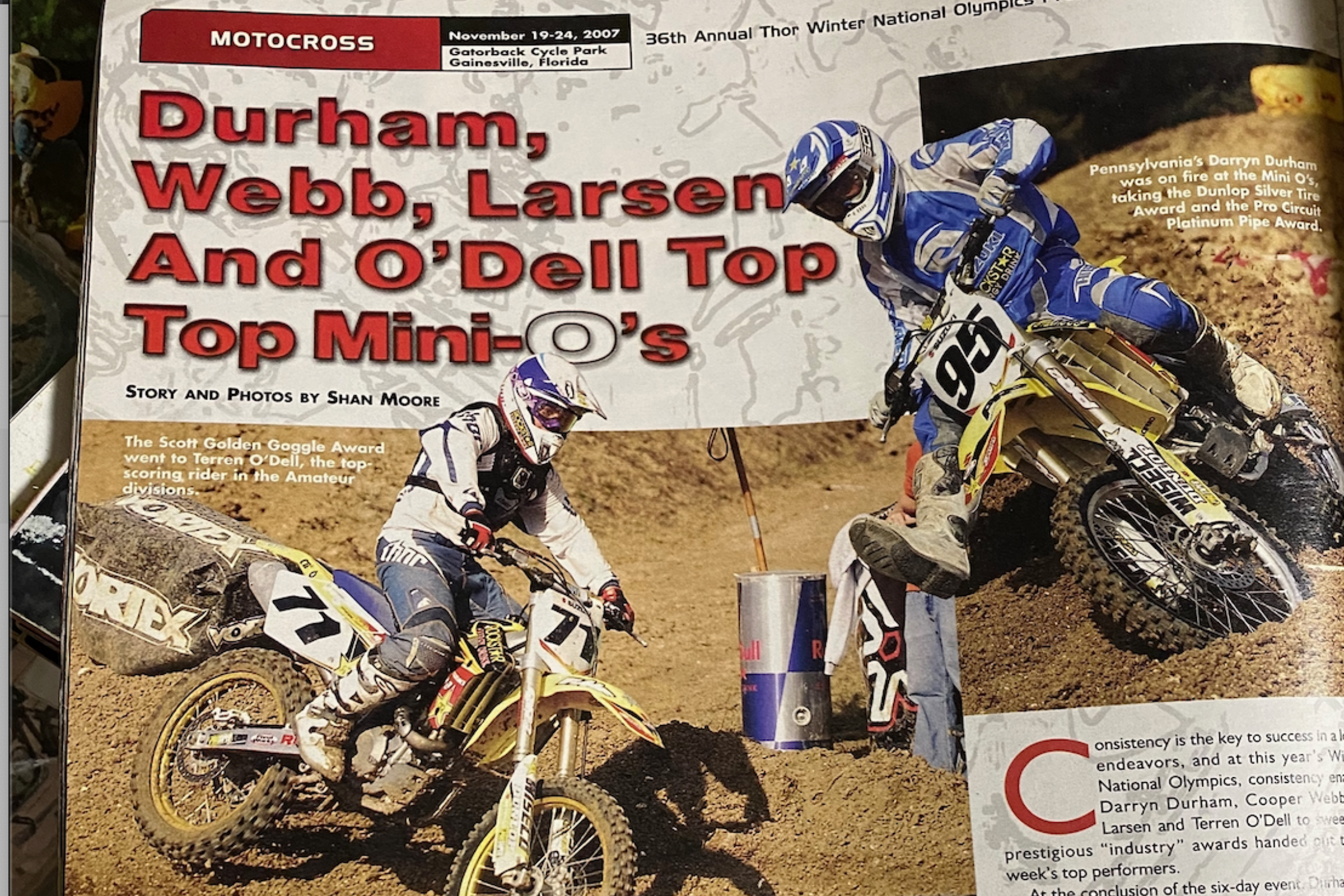 As the 49th Annual THOR Mini O’s are underway at Gatorback Cycle Park in Gainesville, Florida—which you will be able to watch streaming live and free all week long on RacerTV.com—we’ve been looking back at the unique history of this prestigious event. It started in 1972 as a modest gathering at North Florida Speedway near Jacksonville and has grown steadily ever since. The Mini O’s have long been one of the world’s premier youth and amateur motocross races, as well as a Thanksgiving motocross tradition. Here’s part one of the event's history if you missed it.

Damon Bradshaw was arguably the first superstar talent that came out of the Mini O’s, as the North Carolinian used the event to really get himself on the national map. As he graduated into the pro ranks in 1988, a lot of other fast kids were starting to pop up in the results. Kawasaki Team Green fully supported the race, sending fast kids from all over the country to Gainesville every November. For instance, Californians Jeff “Chicken” Matiasevich and Bader Manneh traveled across the country for the event, then went into the pro ranks. From Missouri came Jeff Emig, the future AMA Motorcycle Hall of Famer and multi-time AMA Pro Motocross and Supercross Champion.

By this point supercross had been added and flat track was taken away, though a TT course was built in one of the fields to keep four disciplines going: TT, MX, SX, and hare scrambles, which usually took place on the last day of the event and included a Le Mans–style running start.

Michigan’s Brian Swink was a fast regular winner at the event, and he would go from there in 1990 to a spot on Mitch Payton’s first Peak/Pro Circuit Honda team in 1991 and immediately start winning. Mike LaRocco was a Yamaha factory support rider from Indiana who transitioned into the pro ranks shortly after his last visit to the Mini O’s.

Here is a previous List we did about a lot of the kids who went from the Mini O’s to professional careers. In 1990 the big winners were Ryan Hughes (Dunlop Silver Tire), Ezra Lusk (Scott Golden Goggles and 85cc (14-15)) and Jeff Dement (Bronze Bike Award). Washougal’s Ryan Huffman was the 250 B Champion, young Ricky Carmichael in 85cc (7-11), and Ezra Lusk (125 B) and Greg Rand (85cc (12-13)). And check this out: third place in 125 C Mod was a kid named Nathan Ramsey. Florida’s own Timmy Ferry, Oklahoma’s Robbie Reynard, and Louisiana’s Kevin Windham would all shine at Gatorback in this period as well. And we love this little factoid: in 1990, young Ricky Carmichael beat future NASCAR star Clint Bowyer in the 85cc (7-11) Stock TT race, with @wewentfast founder Brett Smith in fifth. Even the Flyin’ Hawaiian was there—future FMX rider Clifford Adoptante.

One of the things that really helped make the event as popular and prestigious as it became was the coverage that Cycle News gave the Mini O’s each year. With first Mike and Anne Adair providing the annual coverage, and then later photographer Thom Veety of Action Photos, as well as Shan Moore—all of whom we have sourced for these pictures and past coverage—the Mini O’s earned prominence all across the country.

In 1992, the big stars were Kawasaki Team Green’s Kevin Windham and Robbie Reynard, who was just 15 at the time. One year later Reynard would turn pro, and at the ’93 Steel City 125 National, Reynard became the youngest winner ever in AMA Pro Motocross, a distinction he still holds 27 years later.

In ’93 Windham was the star, battling it out with fellow Team Green rider Brian Deegan, who’s back at the Mini O’s with his sons now. Come to think of it, Nick Wey and Timmy Ferry probably have their kids racing there too!

There was a bit of controversy in 1994 when they announced that Jeff Willoh had won the Expert Championship trophy, then realized it was actually Jim Neese who had the most points, meaning Willoh had to hand back the Dunlop Silver Tire Award two days later. RC won the AXO Bronze Boot by winning every heat and final he entered in the 85cc (14-15) classes, and James Stewart bested Josh Summey in a weeklong 65cc battle. And according to the Cycle News report, Travis Pastrana split his chin open on the crossbar pad and needed stitches to continue.

Florida’s own Carmichael turned pro in September of 1996 and made his debut at the Steel City 125 National. A photo from that race was featured on the ’96 Mini O’s program, though he did not race the event. The next time Carmichael raced at Gatorback would be the season-opening 1997 AMA Pro Motocross Championship. His familiarity with the track might have helped the rookie’s chances to win. But then again, he also won the Glen Helen and Hangtown rounds!

That same year, Robbie Reynard decided to return to the Mini O’s despite the fact that he was already a professional with several 125 National wins to his credit. Of course he won the 125 Expert classes.

We could go on and on about all the super fast kids who have come out of the Mini O’s in this millennium: Ryan Villopoto, Davi Millsaps (who earned his first Racer X cover for his ’03 wins), Mike Alessi, Trey Canard, Eli Tomac, Malcolm Stewart, Justin Barcia, Jason Anderson, Zach Osborne, Cooper Webb, Adam Cianciarulo…. Instead, we’ll just share some of the press clippings from Cycle News over the years.

Remember to tune in this week to the live RacerTV.com coverage of the 49th THOR Mini O’s. Good luck to all the riders and their families, and Happy Thanksgiving to everyone.